Platinum is attracting renewed interest as a global push for cleaner energy and waning demand for gold promise to lift demand for the metal. 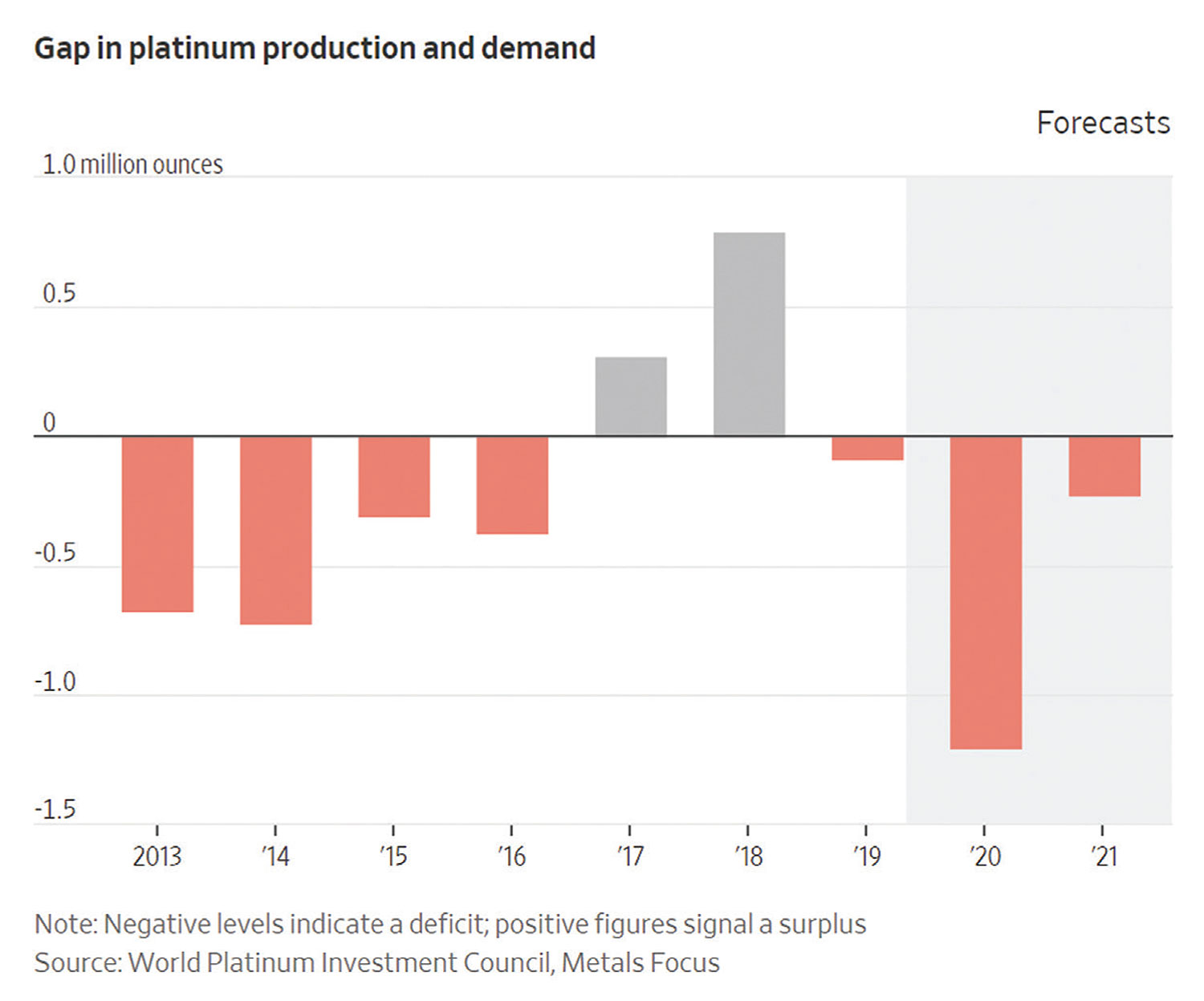 The metal, which has industrial uses as well as demand from investors, stands to benefit in the long term from a global push toward renewable sources of energy, he said.

Meanwhile, gold has wavered this month as promising results from Covid-19 vaccine trials boosted the global economic outlook and sapped demand for safe-haven assets. The price of the precious metal, which hit a record high in the summer, last week fell 4.8% to $1,781.90, its lowest settlement since July 1.

That selloff is prompting investors to look to other precious metals such as platinum, betting that they still have room to climb.

"There is a longer-term growth story associated with platinum that we are in the early stages of," said Steven Dunn, head of exchange-traded funds at Aberdeen Standard Investments. "With gold, the feeling is that we are in the latter stages of its run."

Less than 10 years ago, platinum was the most expensive of the major precious metals. It is used in autocatalysts, which filter out harmful emissions from car exhausts, and its high price prompted many auto makers to look for cheaper alternatives such as palladium. Both metals are used in catalytic converters.

Declining demand from car makers has led to a surplus of the metal in recent years. Platinum prices slipped in response, and have been largely flat since 2015.

But the coronavirus pandemic has shaken up the demand-and-supply dynamic for the metal, and is expected to lead to a record shortage of platinum this year.

While demand from jewelers and car makers has taken a knock, the crisis has driven money into safe-haven assets including precious metals. Investors' positions in platinum futures rose by the most in just under a year last week, according to data from the Commodity Futures Trading Commission.

The supply of platinum, which primarily comes from South African miners, has also been severely crimped by strict lockdowns this year.

The World Platinum Investment Council, an industry group, forecast last week that demand would exceed supply for platinum this year by a record 1.2 million ounces. Between 7 million and 8 million ounces of the metal are used each year.

At the same time, investors are taking note of platinum's role in a global push toward green energy.

Renewable-hydrogen technology generates combustible gas from water and stores it in fuel cells that can be used to power homes and vehicles. Platinum plays a key role, both in electrolysis -- the process of deriving hydrogen from water -- and in the fuel cells used to store it.

The European Union earlier this year pledged to make renewable hydrogen a key part of its European Green Deal, which aims to make the bloc carbon neutral by 2050. China has also said it aims to achieve net-zero emissions by 2060, and is expected to invest in hydrogen power.

The prospect of a revival in demand for platinum from hydrogen technology, coupled with tight supplies, is presenting the most bullish outlook for platinum in years, said Trevor Raymond, the World Platinum Investment Council's head of research.

"We haven't had a demand growth story of this magnitude in platinum for years, but we do now," he said.

The quantities of platinum used in hydrogen technology could be sizable. A car powered by a hydrogen fuel cell would require almost four times more platinum than is currently used in a diesel car with a platinum autocatalyst, Mr. Kirilenko estimated.

Unlike autocatalysts, which can use palladium or platinum, only platinum can be used in hydrogen fuel cells.

Investors are also watching to see whether auto makers turn back to platinum for their autocatalysts. Current prices provide a strong financial incentive to do so, potentially generating more demand, said Mr. Dunn.