The case for carbon action
Business

The case for carbon action

Businesses have significant opportunities to invest in natural climate solutions (NCS) in Southeast Asia to help address long-term negative impacts of global warning on natural and human systems, according to a new report. 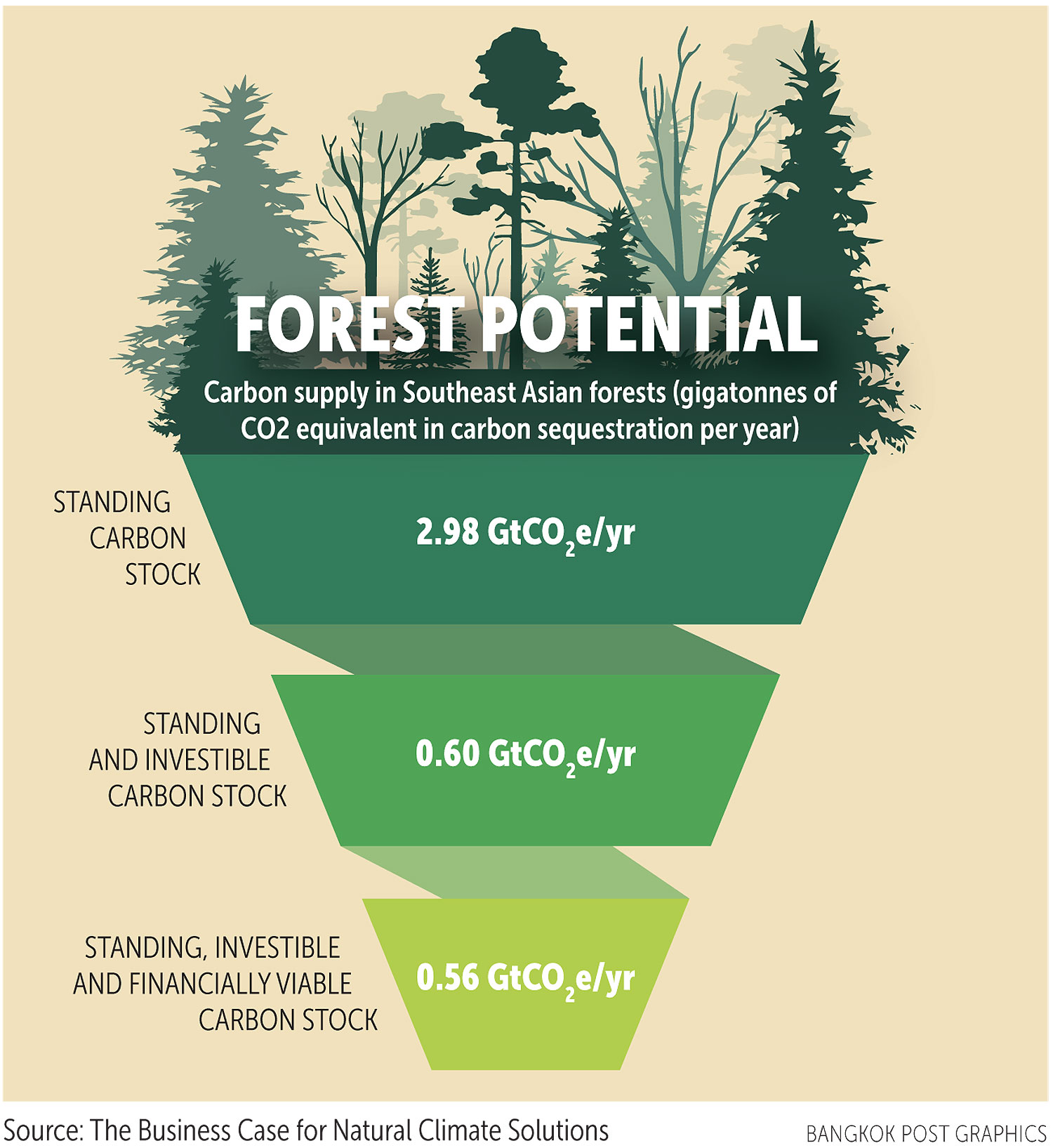 NCS -- climate mitigation technologies that harness natural processes to reduce or remove greenhouse gas -- plays an important role in mitigating the devastating effects of global warming, which is expected to reach 1.5 degrees Celsius between 2030 and 2052, according to the projection by the Intergovernmental Panel on Climate Change (IPCC).

Global warming has contributed to sea level rise and increased incidences of extreme and deadly weather events, researchers have found.

With the potential mitigation impact of 11 gigatonnes of carbon dioxide annually, NCS can provide over a third of the mitigation action needed to meet the Paris agreement targets by 2030, says the report issued by Conservation International, DBS Bank, National University of Singapore (NUS) and Temasek.

However, less than 3% of global climate finance is currently going toward NCS, said the report titled The Business Case for Natural Climate Solutions: Insights and Opportunities for Southeast Asia.

This suggests a need for investments to plug the financing gap needed to carry out NCS activities on a meaningful scale to help governments reach net-zero emissions by 2050.

"To implement natural climate solutions at scale, we need public-private sector partnerships to deploy financial capital and preserve our natural capital," said Robin Hu, head of the Sustainability and Stewardship Group at Temasek.

The report features insights from players in several sectors to define the investment case for natural climate solutions in Southeast Asia, a region among the richest in carbon sinks.

The private sector has distinct advantages as an investor in NCS, according to the report. "Compared to the public sector, the private sector can often more rapidly deploy larger pools of investment that are less susceptible to political risks. It is also skilled in developing cost-effective models that are financially self-sustaining," the authors wrote.

Because of the speed and scale at which they can deploy capital, businesses are uniquely positioned to stimulate a thriving carbon market by purchasing offsets. "To ensure this resulting carbon market is effective, they should also commit to high-quality credits and fair prices, support design and development costs, and engage in policy development and advocacy."

NCS projects are comparable to engineered alternatives (such as carbon capture, utilisation and storage technologies) in terms of cost and return on investment, but are significantly favourable when non-carbon benefits such as other social, economic and environmental outcomes are considered, according to the report.

Positive impacts beyond carbon sequestration include biodiversity conservation and ecosystem services to local communities such as the provision of fresh water, food and disaster risk mitigation.

"Many of the world's most carbon-rich ecosystems -- tropical forests, peatlands and mangroves -- are found right here in Asia," said Richard Jeo, senior vice-president of Conservation International for Asia Pacific.

"Nature provides the best and most cost-effective technology for removing carbon from the atmosphere but is vastly underfunded despite new corporate climate commitments that are being made every day."

According to the report, the benefits of NCS for the Southeast Asian region are striking: "With its vast rainforests and dense stock of mangroves and seagrass, countries in the region possess highly favourable conditions for NCS investment and implementation in both terrestrial and blue carbon -- carbon dioxide removed from the atmosphere by coastal ocean ecosystems -- including an immense potential for investable carbon."

For example, a new study by the NUS Centre for Nature-based Climate Solutions this year has shown that protection of tropical forests in Southeast Asia could potentially generate a return on investment of up to US$27.5 billion a year.

The report notes significant progress in creating regulations as well as incentives to promote NCS in Southeast Asian countries.

In addition to forest protection, reforestation as a climate solution could provide a significant portion of climate mitigation potential in the region. Even after factors such as biophysical, financial and land-use constraints are considered, reforestation in Southeast Asia could potentially contribute to removal of between 0.4 and 0.5 gigatonnes of carbon emissions per year.

"The potential climate mitigation and financial payoffs of NCS are comparable with engineered mitigation solutions. If other co-benefits that NCS provide are considered, such as clean air and water, coastal resilience, biodiversity conservation, food security safeguards and flood prevention, they present even greater benefits," said Prof Koh Lian Pin, director of the NUS Centre for Nature-based Climate Solutions.

Investment in NCS and offsets should be part of a broader portfolio of climate action that also includes decarbonisation, with the aim of reaching net zero by 2050 in line with the Paris Agreement.

The private sector has a unique and critical role in scaling NCS: purchasing and committing to high-quality carbon credits; supporting business model development and technical innovation for project design, implementation and verification; and supporting government priorities. This includes providing clarity on ownership of credits to avoid double-counting.

Companies should apply a transparent price per tonne that supports sustainable, high-quality projects.

Investing in deeper, science-based spatial analyses to quantify the full scope of both NCS and co-benefits captured would ensure a better and more targeted return on investment, help measure impact, and potentially fetch higher prices.

Blue carbon is also a major opportunity in Southeast Asia but is still poorly represented in carbon markets. As they have limited scalable potential and geographic restrictions, businesses should identify and target areas where the co-benefits can be maximised.

"With the science, investors and other building blocks of this ecosystem falling into place, we are now reaching an inflection point where -- with the inclusion of the private sector's investment, innovation and expertise -- we can greatly catalyse growth and drive change."

To download a copy of 'The Business Case for Natural Climate Solutions', visit https://bit.ly/2Wq31xj