Microsoft is on top, followed by Apple, IBM and Amazon in the Drucker Institute's annual Management Top 250 ranking

The technology giants that shape so much of our lives dominate in yet another way: They lead the pack of the country's best-run companies. 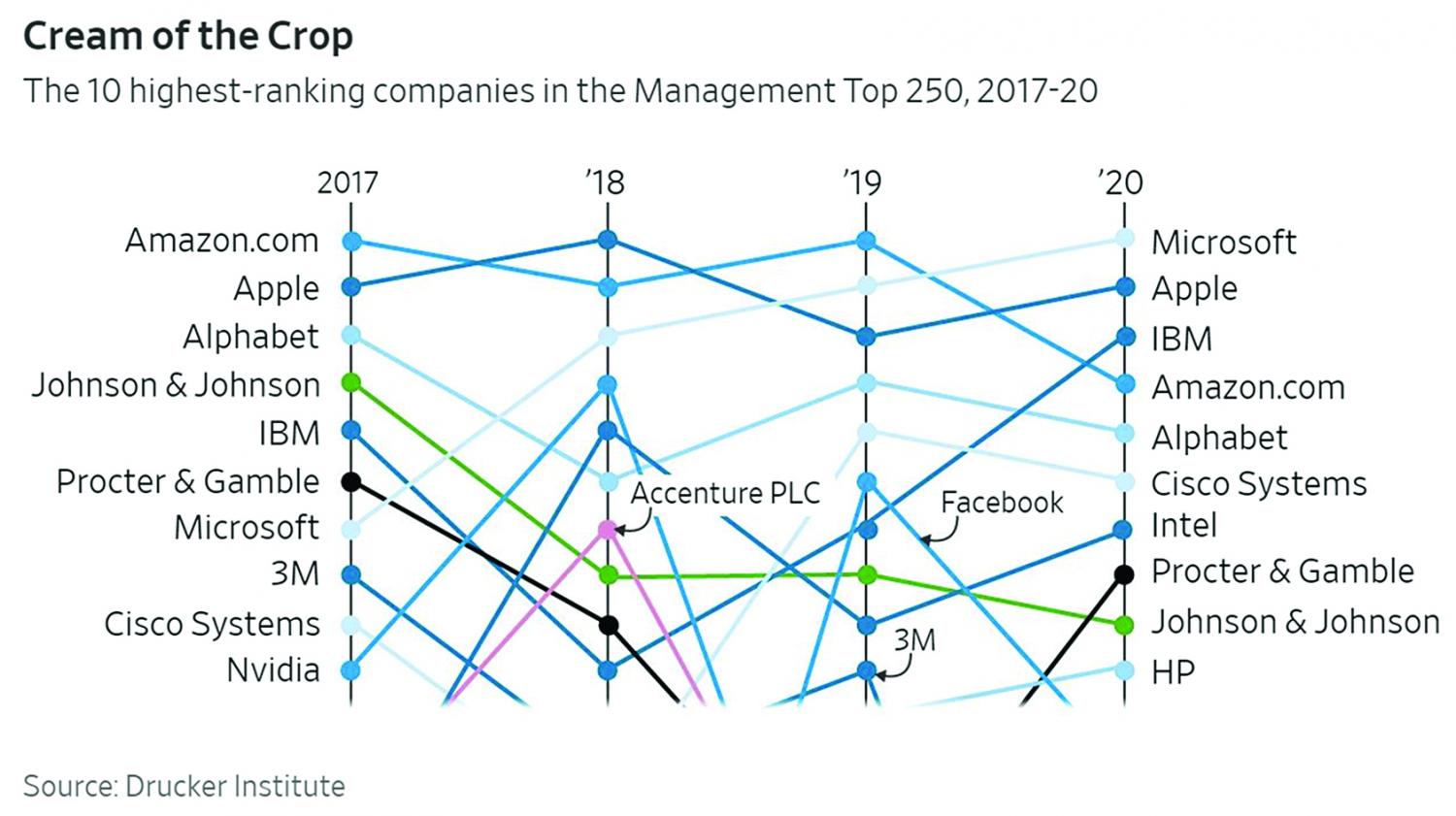 In a year when the coronavirus pandemic has devastated large swaths of the U.S. economy and reconfigured the ways millions of Americans shop, work, communicate and learn, tech stalwarts have remained in the uppermost echelon of the Management Top 250, an annual ranking based on the principles of the late management guru Peter Drucker.

In the 2020 lineup, Microsoft Corp. unseated Amazon.com Inc. as No. 1 by performing consistently well across each of the five main components of the overall ranking compiled by researchers at Claremont Graduate University's Drucker Institute: customer satisfaction, employee engagement and development, innovation, social responsibility and financial strength.

While their analysis captures data from the first few months of the pandemic, through the end of June, Drucker Institute researchers say the health crisis likely had a limited impact on their 2020 list.

"What we've really noticed is that the companies that scored highest in our ranking last year seemed in the best shape to deal with the crisis," says Rick Wartzman, head of the KH Moon Center for a Functioning Society, a part of the Drucker Institute.

Rivals in the cloud-computing market, Microsoft and Amazon have both benefited from the shift to remote work, as companies and employees embraced their products to adapt to office closures and social-distancing requirements aimed at curbing the spread of the coronavirus.

Silicon Valley has faced mounting scrutiny from consumer and privacy advocates as well as policy makers, including antitrust investigations and calls for tighter regulation of digital platforms after a contentious election season. Yet the firms that lead the technology sector still have a lot going for them, says Zachary First, Drucker's executive director.

"There is something going on in technology right now around just basic management. These top tech firms are very well managed," Mr. First says. "I think it speaks to their public prestige, the extent to which they attract talent, customers, and they have this relentless focus on being high-performance organizations."

Microsoft moved into the top spot in this year's ranking by scoring strong marks in innovation while doubling down on corporate culture and social impact.

On the innovation front, the company notched increases in research-and-development spending, patent applications and trademark registrations. A high volume of trademarks is a good measure of the extent to which a company can commercialize its intellectual property, Drucker researchers say.

In the past, Microsoft missed key waves in technology innovation such as the rise of search engines, social media and mobile phones, says Suresh Kotha, a management professor at the University of Washington's Foster School of Business.

But since Satya Nadella took over as chief executive in 2014, he has pushed to develop the company's cloud-computing business, turning it into a serious market competitor, Mr. Kotha says.

"They see these waves but they didn't take the action, and this one [cloud computing] they did," he says. "They got this wave correctly."

Already an earnings driver before the pandemic, cloud computing became more central for many of Microsoft's corporate customers as they moved to support employees working remotely.

Mr. Nadella has also sought to make Microsoft a more vocal corporate citizen, especially as the tech industry faces greater government and public scrutiny, and its social responsibility score ticked up this year in the Drucker ranking.

In January, the company pledged to eliminate its carbon emissions over the next decade and invest $1 billion as part of a wider climate commitment.

Microsoft aims to remove as much carbon from the atmosphere by 2050 as it has produced since its founding in 1975.

"The culture change was one of the things Satya Nadella did that makes it a great company," says Mr. Kotha.

In addition to cloud computing, Chief Technology Officer Kevin Scott touts Microsoft's progress over the past year in artificial intelligence and gaming alongside its investments in sustainability and collaboration software.

"We are constantly trying to pay attention to what the world is telling us about what it needs," Mr. Scott says, "and constantly looking for where the technology trends are heading."

Amazon dropped to No. 4 overall this year in part because its innovation score fell from an unprecedented level a year ago, though it is still the highest score for any company in that category. Its innovation score a year ago was more than double that of any other company's.

While Amazon stands out in innovation, its performance is more uneven elsewhere on Drucker's measures. It is about average on social responsibility, although the company has made efforts to improve in that regard, including launching a $2 billion internal venture-capital fund focused on technology investments to reduce the impact of climate change.

The e-commerce giant, which has gone on a hiring spree this year to meet exploding demand, also continues to face criticism by labor organizers and lawmakers for its treatment of workers.

It raised U.S. employees' minimum wage to $15 an hour in 2018. The company's score in employee engagement and development improved slightly this year.

"You have to have strength across the board to hold your own at that level," Drucker's Mr. First says of Amazon's 2020 ranking. "It's what makes Microsoft's ranking so impressive, that they are not just innovation at all costs. They are excellent across the board."

An Amazon spokeswoman says the company strives to be the most customer-centric company on the planet and notes that it topped the American Customer Satisfaction Index for internet retailers last year.

She adds Amazon prioritizes the safety and health of its employees and has invested millions of dollars to provide a safe workplace.

The spokeswoman notes that Amazon offers Covid-19 testing opportunities to its employees, and points to several of its other innovations during the pandemic, such as its Amazon Web Services initiative to accelerate Covid-19 diagnostics, research and testing.

Researchers also highlighted companies with particularly weak scores in one or more dimension of Drucker's scorecard.

Facebook, for instance, had a disproportionately low customer-satisfaction score, compared with its performance in other categories, amid continuing criticism of its data-privacy practices and handling of misinformation.

While the social-media giant has ramped up its efforts to police political and coronavirus-related misinformation this year, Facebook continues to face criticism in Congress, where bipartisan calls for tighter regulation of online platforms are intensifying.

Drucker researchers note the company was in about the bottom 1% of all companies they studied in customer satisfaction.

In the overall ranking, Facebook fell six spots from 2019 to No. 12 this year.

The Drucker researchers say Facebook's overall statistical profile is comparable not to other tech companies but to big tobacco firms. Similar to Philip Morris, Facebook scored well in employee satisfaction and for its healthy balance sheet but faltered with customers.

Tim Kendall, the company's former director of monetization, drew a similar comparison in testimony before Congress in September, speaking about the platform's design.

"We took a page from Big Tobacco's playbook, working to make our offering addictive at the outset," he told House lawmakers.

While tech companies account for much of the top 10, some older blue-chip companies have also risen on the list of most effectively managed firms.

Procter & Gamble, the maker of Tide, Bounty and many other consumer products, moved up to No. 8 from No. 15 a year ago thanks to high scores across the ranking's five dimensions of performance.

The company has benefited from consumer shifts spurred by the pandemic but also began making changes to its complex management structure that had sometimes put brand managers and country managers at odds.

One of the list's biggest gainers in the ranking this year was General Electric Co., which rose 80 spots to No. 20, bolstered by a higher innovation score and a slightly better financial score.

GE has struggled for years with declining profits and cash flow but recently completed its sale of its biotechnology business for $21 billion in cash.

Layoffs and cost-cutting have helped GE weather Covid-19's damage to the commercial airlines that buy the jet engines the company makes.

A GE spokeswoman pointed to Chief Executive Larry Culp's comments on the company's Oct. 28 earnings call: "We're encouraged by our progress amidst a challenging backdrop. … We continue to deliver for our customers and tackle the world's biggest challenges, from precision health to the safe return to flight to the energy transition."

IBM -- a blue chip before many of today's leading tech companies existed -- climbed three spots to No. 3 this year amid efforts to reposition itself as a cloud-services provider as customers flocked to rivals such as Amazon and Microsoft.

IBM has reported declining revenue in 30 quarters over the past decade, and it's financial-strength score in the ranking slipped this year. But the company recorded the eighth-highest innovation score since the ranking process began in 2012.

IBM abandons patent applications at a higher rate than others, a sign of its commitment to move past obsolete technology. The company's employee and customer-satisfaction scores also rebounded after being down for several years.

"IBM's investments in hybrid cloud and AI technology, as well as in technologies of the future like quantum computing, are making IBM an employer of choice and a valuable partner for clients," a company spokesman says.

On the down side, it has been a tumultuous year for Occidental Petroleum Corp., which fell off the Top 250 list entirely this year -- from No. 180 last year -- after it posted a decline in financial strength.

The Houston-based oil producer slashed its dividend earlier this year to conserve cash amid low oil prices and weak demand due to coronavirus lockdowns. The company has also curtailed its capital spending and cut executive and employee salaries temporarily.