PTTEP's Bongkot offshore gas block in the Gulf of Thailand.

Environmental, social and governance (ESG) ratings and sustainability stock indices based on ESG scoring have become the hot new trend among retail and institutional investors, allowing them to evaluate companies based on sustainability and social development instead of simply profits and losses. ESG funds promise long-term growth as governments around the globe promise to scale down emissions to combat climate change.

But in practice, the loose framework for granting high ESG ratings has allowed companies with holistically negative impacts on the environment to populate domestic and global sustainability indices and funds, while expanding production of not-so-sustainable activities such as coal mining, offshore oil drilling and single-use plastics.

Some 16 of the 58 companies listed on the Stock Exchange of Thailand (SET) Thailand Sustainability Index (THSI) derive most of their revenues from fossil fuels or petrochemical products such as plastics.

Three of the top four companies in the index by weight are oil and gas companies: PTT, the state-owned oil and gas conglomerate; PTTEP, its exploration and production subsidiary; and Gulf Energy Development (GULF), a natural gas power plant operator.

Seven of these fossil fuel and petrochemical firms were listed on the Dow Jones Sustainability Index (DJSI), including coal mine and coal power plant operator Banpu Plc and PTTEP, which is currently facing three international lawsuits for its role in operating the offshore oil rig that caused Australia's largest oil spill. 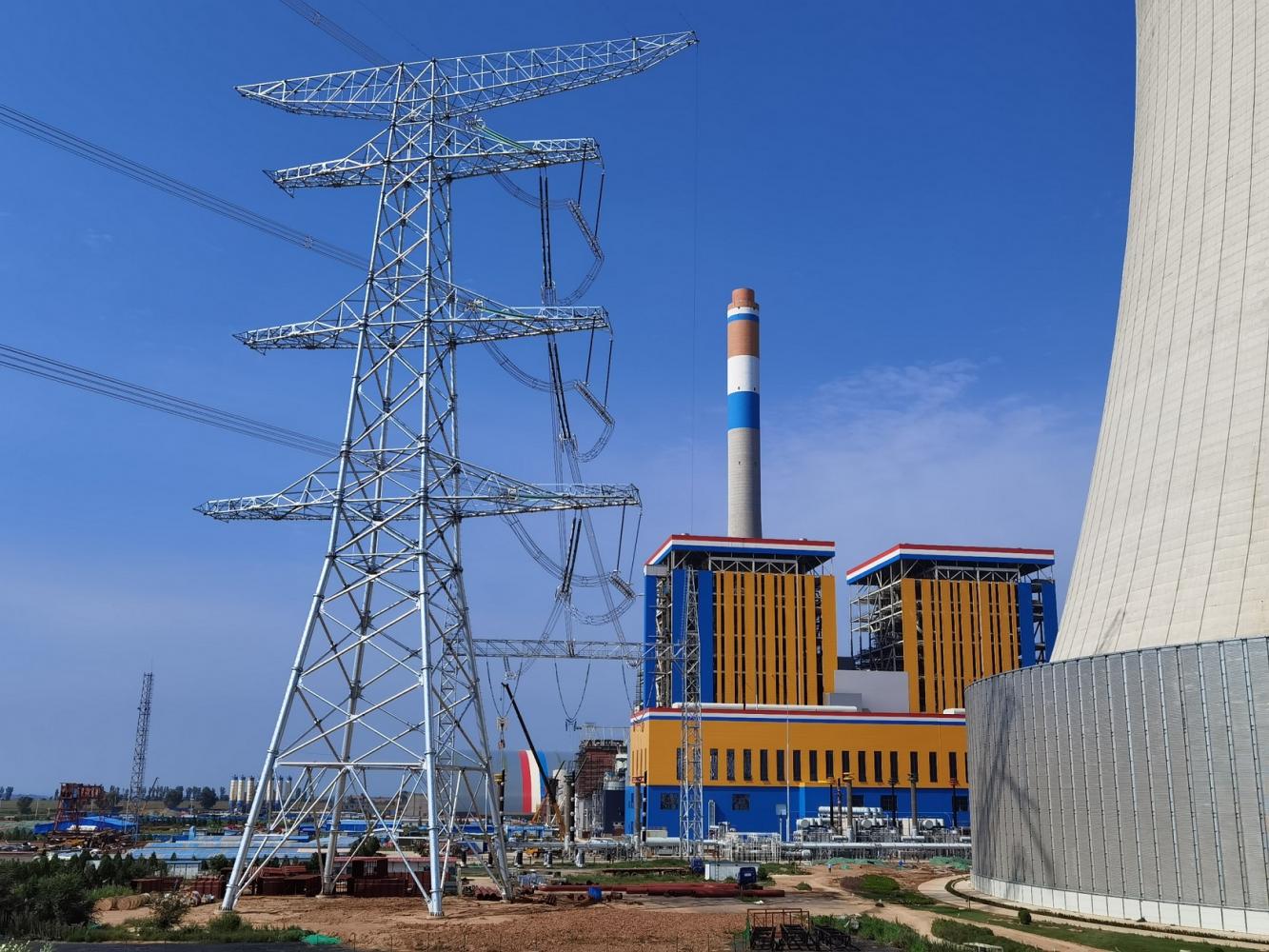 A view of the Shanxi Lu Guang power plant in China, a joint venture of Banpu Power Plc.

The THSI was created in 2015 and comprises listed firms with individual market capitalisations of over 5 billion baht and outstanding ESG ratings, taking into account all stakeholders including social and environmental aspects, as outlined on the SET's website.

Firms listed on the DJSI, based on a similar set of criteria, are automatically accepted into the THSI. The index is also used as a benchmark to select firms for the Government Pension Fund's ESG Focused Portfolio.

ESG ratings have no international standards and are based on self-reported information by companies that can include or leave out any metric or aspect of their operations they wish.

"We encourage listed companies to disclose the results of their sustainability performance based on the entire scope of their operations, however we can see in the reports what percentage of the operations the data is disclosing," said Krisada Sektrakul, senior executive vice-president and head of sustainable market development at the SET.

"If they try to hide the bad parts of their operations in reports, it is up to the readers of the data to use judgement and for institutional investors to engage with the company and raise questions about why they did not include all the data."

Companies can report their own greenhouse gas (GHG) emissions, and set their own reductions targets that are not based on the Paris Climate Accords and Thailand's nationwide target to reduce GHG emissions by 20-25% by 2030.

The SET does not lower firms' ESG scores if they do not meet these targets to promote transparency in ESG reporting, and does not have a system to verify if the GHG emissions and other figures reported are accurate.

"We are not grading whether one company is doing better than another," Mr Krisada said. "We are scoring them in line with their management approach and not on their performance base. We do not deduct points if they miss their target to encourage transparency."

The Securities and Exchange Commission is working on a law to require companies to release their GHG emission figures and set up a mechanism to audit the pollutants, but the current draft contains a loophole allowing companies to not report GHG emissions if they are "trade secrets", according to Greenpeace Thailand.

Companies with high ESG scores and listings on sustainability indices can gain access to a bounty of funds from institutional investors and become ostensibly linked with the terms "environment" and "sustainability". But being listed on a sustainability index does not mean a company's operations are environmentally sustainable, just that they meet the multifaceted qualifications of the index.

ESG scores are based on sustainability reports released by listed firms each year. These vibrant-coloured PDFs are filled with pictures of happy sea turtles, verdant forests, clear skies, and some worrying environmental statistics in some cases.

In 2019, PTTEP reported 10 oil spills in Thailand amounting to 10.9 tonnes of oil and gas, according to its own sustainable development report used by third parties to determine its ESG rating. The company targets zero spills, but has greatly increased the volume of spills between 2016 and 2019.

Its total GHG emissions fell from 4.63 million tonnes of CO2 to 3.91 million tonnes, but these figures are not necessarily representative of the company's broader operations as many of their operations are managed under nearly 90 subsidiary companies. While PTTEP has a detailed sustainability report, its subsidiaries do not.

In terms of fossil fuel companies, if they are producing some negative externalities through their companies, they could still receive high scores if their ESG reports produce many examples of trying to reduce these externalities and increase their positive externalities, as with PTT's plans to plant trees. This means the company receives a better score.

PTTEP plans to reduce its GHG intensity, the ratio of CO2 emissions to volume of production, by 25% between 2012 and 2030, but not overall GHG emissions. Parent company PTT does plan to reduce its emissions by 20% by 2030, in line with Thailand's Paris Accords commitment, but because it is a mid-stream oil trader its emissions are smaller.

"In Thailand the trend is just starting, so when we talk about ESG, more attention is being paid to institutional investors looking to invest in larger companies," said Pipat Yodprudtikan, director of Thaipat Institute, which puts out a list of the top 100 ESG companies in Thailand each year.

"But we need to give room for all the players in this field to behave and find a proper way to conduct ESG."

Mr Pipat's ESG 100 index is used by five mutual funds and one private fund, which is managed by Krungthai Asset Management Plc. The index uses more rigorous negative screening than the DJSI and THSI, so it does not include companies such as PTTEP or Banpu, but does include PTT.

"If there are incidents such as oil spills or disasters, we can remove the company from the list if there is ample evidence to prove it was caused by the company," he said.

There are many ways for companies to boost their ESG scores through data manipulation or selective reporting, other than setting up a subsidiary. For instance in retail, Mr Pipat said, the most material topic environmentally is how much waste they produce, so a company could simply not report that information in their ESG report, meaning assessors cannot evaluate it on that metric.

ESG ratings also do not disclose precisely how they weigh the three parts of ESG (environment, social and governance). A company could put extra effort into getting high scores in areas that do not affect their bottom line, such as governance, to make up for a poor environmental record.

"Companies could change their governance score quite conveniently because they just answer the question based on what the assessment wants to see," he said. "Many companies in DJSI are not even answering the questions themselves, but using consultants to give questions they want to hear. Anything they expose to the public could be legally binding."

Despite these flaws in ESG reporting, Mr Pipat said it will be difficult to create an international standard for ESG that could hold companies to higher standards, as ESG has become a product that fund managers and other financial institutions use to sell to buyers. This distinction requires substantial differences to be used in marketing, he said.

Another business with outstanding domestic and international ESG ratings is Banpu Plc (featured on the THSI and DJSI), a company that draws 70% of its revenue from coal by operating six coal-fired power plants and 21 coal mines around the world. It is currently constructing one more 1,300MW coal plant in China.

While it plans to reduce its coal mining total from 4.5 million tonnes a year to 4 million tonnes by 2025, it also expects to increase coal-based electricity produced at its plants from 3GW to 4.5GW over the same period.

The company plans to reduce its coal revenue share to 50%, not by closing plants but by building new natural gas plants and to a lesser extent renewable energy projects.

Coal is widely considered the dirtiest of all fossil fuels, with environmental activists widely condemning China for continuing to build coal plants and keep the industry afloat.

In Banpu's 2019 Sustainable Development Report, coal plants are unironically depicted with leaves jutting from the smokestacks in a map of the company's global operations.

"We have to transition from where we have been to where we are coming to," he said. "Thai Union did not enjoy the best scores, but made massive changes in how they interacted with communities and are now internationally recognised for their efforts."

Mr Cantwell said the world cannot just shut down coal plants and other fossil fuel industries, as rapidly growing nations such as China need to quickly grow their energy infrastructure to keep up with their economic development.

"These companies can do the work to be better, like installing scrubbers in their coal plants," he said. "But ultimately society will have to play a role in determining whether these businesses are phased out for good. In the meantime, they can improve on lines set by ESGs."

ESGs in emerging markets essentially act as a way to bring global capital to development projects in order to put these nations on par with developed nations, which will inevitably require them to burn fossil fuels and use dirtier, cheaper energy sources, so that eventually they can afford clean energy.

"All the criticism of what a coal manufacturing plant is doing now is less important, as it will get a good score if it is making a transition," Mr Cantwell said.

It would be easy to blame differing standards for developed versus emerging countries as the reason companies with so many negative externalities make internationally respected sustainability lists like the DJSI. However the North American DJSI includes cigarette maker Phillip Morris and the US defence contractor with the most number of "contractor misconduct incidents", Lockheed Martin.

And because ESG evaluates company's promises to do better in the future, it does not make them reckon with their pasts. So Dow Inc makes the DJSI, the company that refuses to pay pending settlements to the victims of the Bhopal gas tragedy in India after it purchased the company responsible and claims no responsibility for the actions of its subsidiary.

"ESG rating indices like the DJSI and other international ratings essentially act as a rubber stamp, allowing companies to report their own figures and environmental targets that do not necessarily represent real change happening on the ground," said Tara Buakamsri, country director of Greenpeace Southeast Asia.

"Companies themselves are pushing resources towards corporate social responsibility for public relations purposes instead of investing in mitigating the damage of the products they produce."