Thailand ranks No.2 among Asian IPOs

Total offerings worth B159bn as of Dec 25

Thailand grabbed the No.2 spot for initial public offerings (IPOs) in Asia in 2020, raising US$4.96 billion in total, behind only China if excluding cross-listed shares from other bourses such as infrastructure funds (IFFs) and real estate investment trusts (REITs).

The number of IPO launches from the start of the year to Dec 25 stood at 26 deals, excluding IFFs and REITS, below the 28 recorded last year, said Soraphol Tulayasathien, senior executive-vice president of the Stock Exchange of Thailand (SET).

According to the SET, as of last Friday China raised the most in Asian IPOs with $65.6 billion, followed by Thailand, then India with $4.52 billion.

If cross-listed stocks, such as the share offerings of US-based, China-based or other foreign-based listings are included, Thailand was ranked third behind Hong Kong (with $44.3 billion, but with non-cross listings consisting of only $631 million).

Including the IFF offerings worth 2.8 billion baht and REITs worth 2.45 billion, the total offering value this year reached 165 billion baht, a 33.3% increase from 123 billion in 2019.

He said there were more food science, tech and animation firms making the list this year.

"IPOs are a major growth driver for the SET total market this year," he said.

However, a challenge is how to keep market capitalisation growing from both new IPOs and existing listed members, he said. 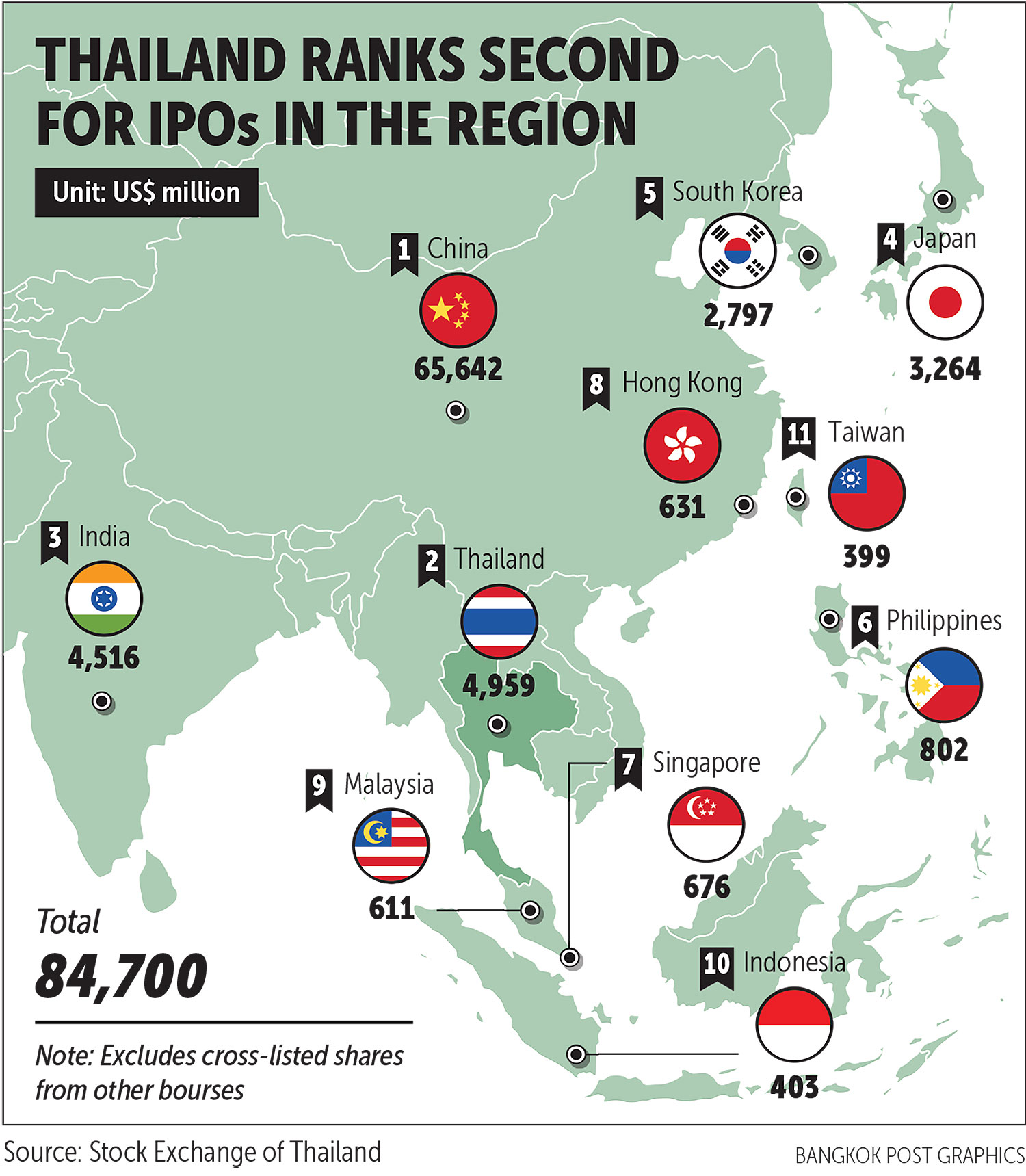 Veena Lertnimitr, executive vice-president for investment banking at Siam Commercial Bank (SCB), said non-traditional firms that have different business models such as digital platforms, e-commerce and businesses focused on food branding, have the best chance of attracting investors and raising significant funds through IPOs next year.

Ms Veena said SCB has three IPOs in the pipeline next year and an additional two deals for late 2021 or early 2022.

She said that some IPO deals from traditional businesses facing impact from the outbreak were postponed to revise plans and do business adjustments to prepare for IPO fundraising after the outbreak.

Prasert Tantayawit, managing director of the investment banking department at Maybank Kim Eng Securities Thailand (MBKE), said two of its pipeline deals in aviation-related and retail-related businesses were also postponed due to the outbreak.

However, MBKE also has three mid-sized deals in healthcare, construction and industrial estates that are ready to raise funds because the sentiment for new shares has continued to be open and is likely to be active next year as investors have responded well to IPO shares.

"The market price has declined since the outbreak to a level that attracted large investors to return to the market," he said. "The higher participation of large investors attracts retail investors, leading them to participate more. Both factors led new shares issuers dare to place their offerings."

He said the firm will also focus on its merger and acquisitions advisory business, especially cross-border deals which are a strong point of MBKE as an Asean financial adviser.