Minister suggests EVs are the future

The launch of an electric ferry service along the Chao Phraya River could raise public awareness of the benefits of electric vehicles. (Photo by Wichan Charoenkiatpakul)

The state's proposed car trade-in programme, originally planned as an initiative aimed at stimulating car purchases in the New Year amid tepid sales during the pandemic, has resulted in electric vehicles (EVs) becoming a hot topic.

Although the plan was shelved so more studies can be carried out, particularly in relation to whether the programme should include EVs, Industry Minister Suriya Jungrungreangkit stressed that EVs are the future of motoring in Thailand.

The future of EV sales should become clearer once the government and carmakers conclude planned talks next month regarding the proposal of imposing a higher excise tax on vehicles with internal combustion engines in an effort to promote more environmentally friendly vehicles, such as EVs.

However, it remains uncertain whether EVs are going to become a major trend in 2021 because business operators in the automotive industry have reacted differently in their responses to requests for comment, even with government eagerness to promote EVs.

Krisda Utamote, president of the Electric Vehicle Association of Thailand (EVAT), believes it is possible to attain the goal as the number of new registered EVs in Thailand has increased sharply this year.

Mr Krisda expects the prospects for EVs to be bright in 2021 as he believes the public will become increasingly familiar with the performance of electric-driven vehicles used in public transport systems.

For example, on Dec 22 Prime Minister Prayut Chan-o-cha presided over the launch of a trial service of electric ferries operating on the Chao Phraya River, aimed at promoting the use of cleaner energy.

The vehicles were developed by Energy Absolute Plc and 22 of the ferries could eventually serve Bangkokians if the trial service proves a success.

On Nov 27 Gen Prayut introduced an electric boat service offered by City Hall that runs along a five-kilometre stretch of the Phadung Krung Kasem canal.

The boats provides commuter services, connecting passengers with the MRT subway system and Chao Phraya River taxis. A total of eight boats are scheduled to service the route.

Services of this nature should raise awareness among the public about the benefits of EVs, such as cleaner air and lower levels of noise pollution, said Mr Krisda.

He expects the public bus system to be the next area for EV development, although the authorities will first need to consider steps to revise the conditions for bus procurement.

Mr Krisda is also optimistic about EV purchases as he expects the prices of some models to become more affordable in the future. Some passenger EVs, such as a station wagon produced by MG, should be priced less than 1 million baht per unit, he said.

The total number of registered passenger EVs stands at 5,021, while there are 2,734 electric motorcycles, according to EVAT. The number of charging outlets is 1,974 at 647 locations. 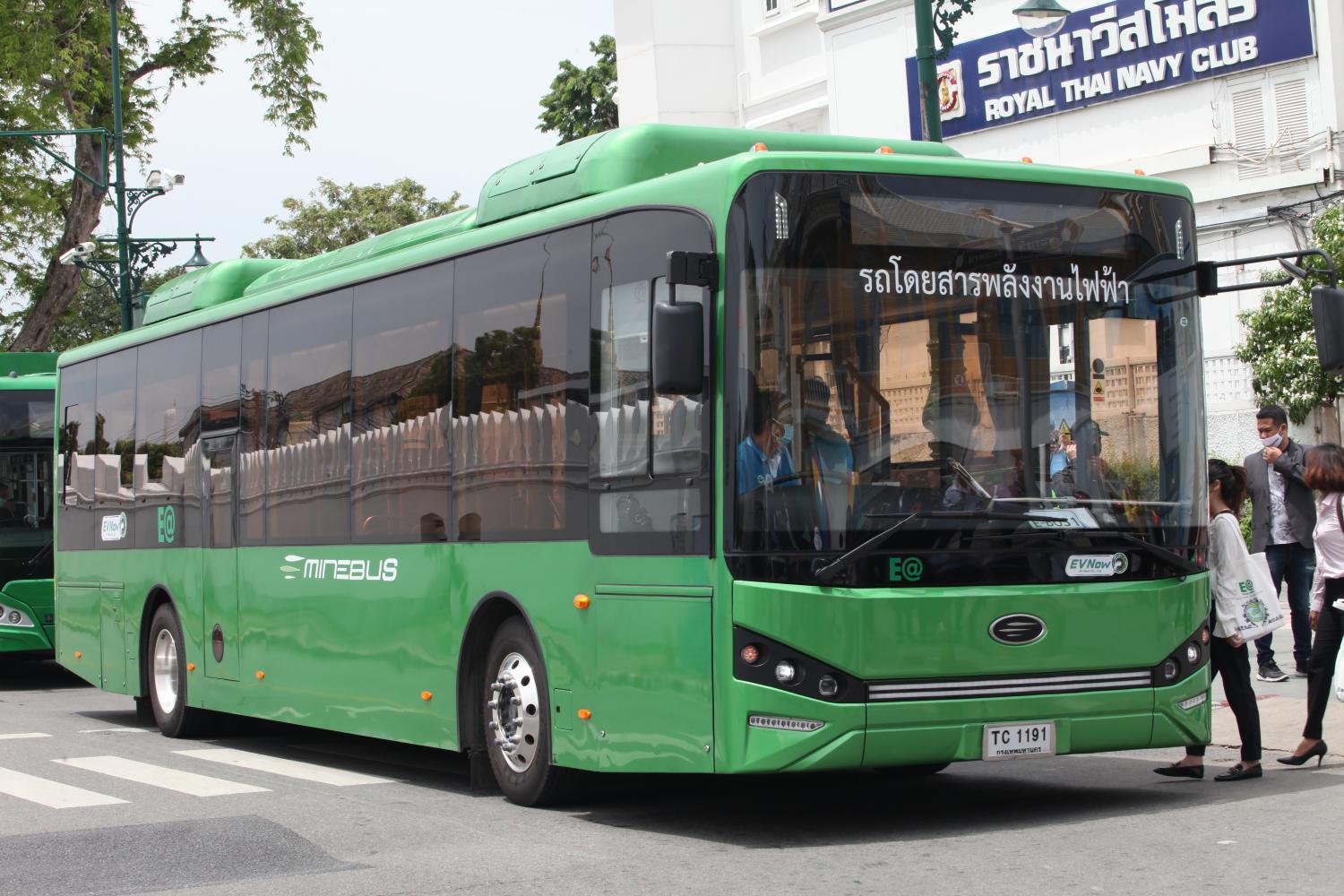 Mr Krisda thinks the public bus system is the next area for EV development.  (Photo by Apichart Jinakul)

The automotive club of the Federation of Thai Industries believes the EV industry will not grow quickly over the next 3-5 years because a shift to EVs will depend greatly on vehicle price.

EVs will only gradually gain more market share in the domestic market, said Surapong Paisitpatanapong, the club's vice-chairman and spokesman.

"State policy and prices of EV technology will determine demand for EVs," he said.

Yet most EVs are still very expensive, with prices over 1 million baht per unit.

"Only a small group of motorists in Thailand can afford to buy them," said Mr Surapong.

"EVs will not become a mass market item because of their expensive prices in a society mostly made up of the middle class," he said.

The perception of EVs is also limiting the growth of the EV business, as it remains unclear whether the vehicles will match the requirements of motorists' daily routines, said Siamnat Panassorn, who oversees engineering and business policy for Tri Petch Isuzu Sales Co, the local distributor for Japanese carmaker, Isuzu.

The behaviour and lifestyle of motorists is a key factor in whether they become a trend, he said.

The company commands a large market share in the pickup segment. Many customers use pickups to deliver farm and consumer products, and often have to race to get jobs done quickly.

"If customers switch to use electric pickups, they may be concerned over the charging time required and charging outlet locations," said Mr Siamnat.