Surveillance steps will be reassessed

The Stock Exchange of Thailand will revise the criteria for the SET50 Index.

The Stock Exchange of Thailand (SET) is poised to revise the criteria for the SET50 Index, the definition of free-float shares and its market surveillance measures because of unusual surges of many free-float stocks last year.

The sudden surge of Delta Electronics' (DELTA) share price by more than 1,000% at its peak, and 808% at its year-end closing price, made it a hot topic last year because it caused volatility in the stock market.

"There are many stocks, not only DELTA, that are largely owned by strategic shareholders. The prices of those stocks also drastically fluctuated last year," Mr Paiboon said.

Retail investors should be aware that strategic shareholders' capital movements will affect their investments, he said. 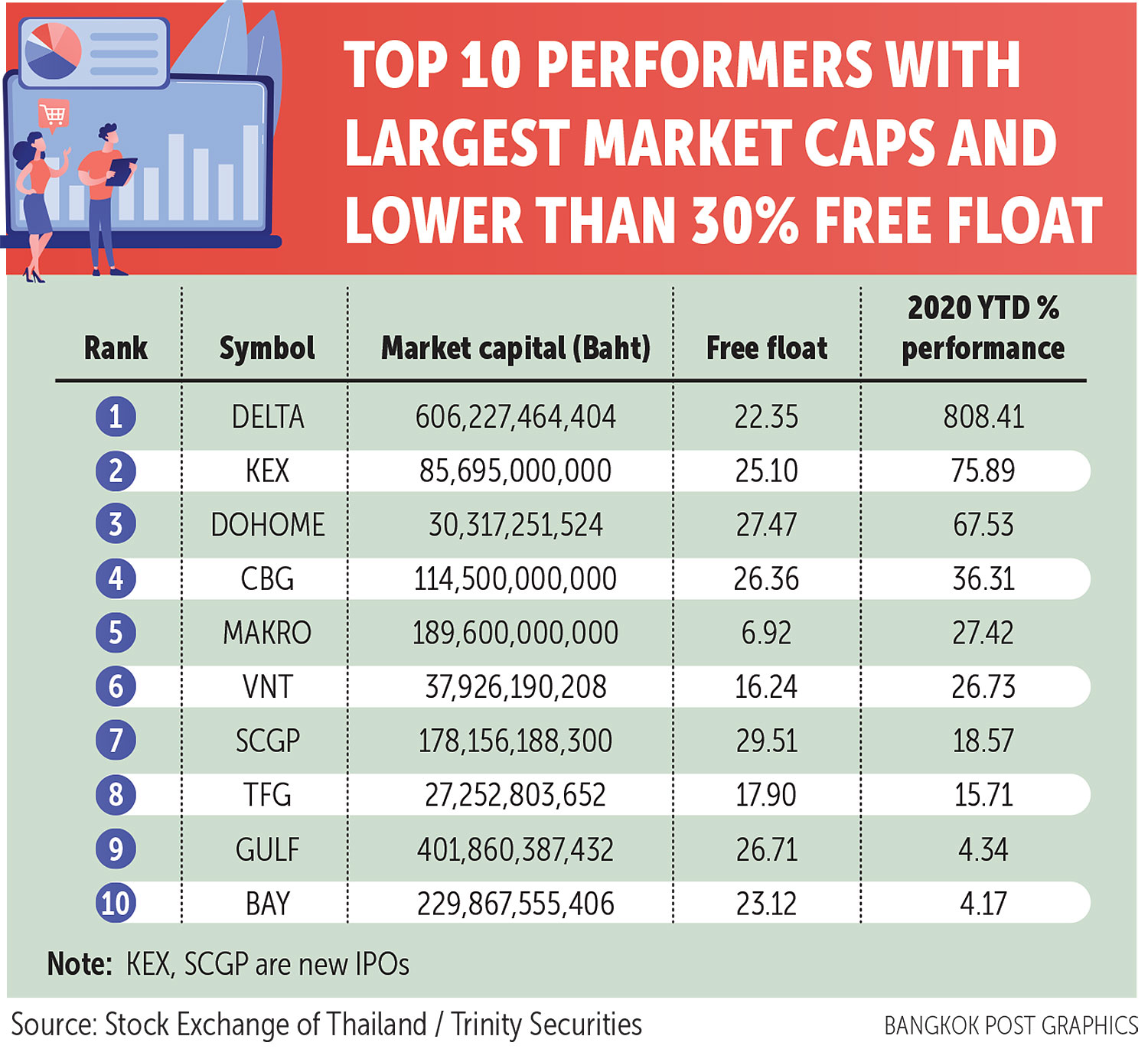 The 52 stocks with more than 40% free-float shares occupied 43% of the total market size.

Although some of the top 100 missed the opportunity to be listed in SET50 and SET100 due to their slim portions (less than 20%) of free-float shares, the movements of their prices still have an impact on the SET Index.

Nuttachart Mekmasin, an analyst at Trinity Securities, said the SET Index outperforming the SET50 Index by 7.7% last year reflected retail investors' relatively higher liquidity among those that entered the market during the lockdown period.

These retail investors tend to participate mostly in small and medium stocks that have been less affected by the outbreak, while stocks in the SET50 are mostly concentrated in the cyclical sectors that have been largely battered by the pandemic.

"It also suggested that the SET Index is dominated by the non-SET50 shares with low free float," he said.

The full list of SET50 members will also be announced roughly six months in advance to grant institution fund managers time to adjust the weight of stocks in their portfolios.

He said it would be better if the free float is included in the index calculation.

"The existence of low free-float stocks is usual in many markets including the SET. However, price irregularities or manipulation can arise due to the low supply," he said.

An SET source who requested anonymity said market surveillance measures such as cash balance should also be reviewed as it is an early sign that alerts investors to price irregularities.

The source said DELTA shares met some cash balance criteria but not all.

Mr Nuttachart said DELTA's percentage of turnover ratio, calculated from the daily average trade volume in a week divided by the percentage of the free-float adjusted market cap, was just around 18%, far below 40% which is the criteria required for cash balance or trading with cash settlement, thanks to the large base of total outstanding shares.