Groceries Prove a Pandemic Bright Spot for BP and Shell

Customers are served in a 'Deli by Shell' store in Kemerovo, Russia.  BLOOMBERG

Gas stations have emerged as one of the most profitable parts of the major oil companies' sprawling operations during the pandemic, with higher spending on food and drink offsetting weaker demand for fuel.

That is encouraging both companies to push ahead with plans to expand their retail businesses, which they are betting can help offset declining oil income longer term.

"We believe we can more than offset the impact of fuel volume declines in established markets to 2030 through growth in convenience," Emma Delaney, BP's head of customers and products, told investors at its strategy event last year.

Selling coffee, food and other household items at gas stations is an attractive business, executives and consultants say, because profit margins are typically higher than the oil business and returns are more stable because they aren't linked to volatile energy prices.

Exxon Mobil Corp. and Chevron Corp. haven't benefited to the same extent as their European counterparts as they have fewer sites after selling them off in the past.

Both Shell and BP say they make a return on investment of more than 20% in their marketing divisions, which includes gas stations, as well as lubricants and premium fuels, compared with a typical 15% return on oil projects and 10% return on renewable-energy projects.

Shell's marketing business reported record adjusted earnings of $1.6 billion in the third quarter, up from $1.5 billion in the previous year's period.

The division generated more than half the company's overall earnings in the quarter, compared with around 20%-30% in recent years, although the proportion could fall as oil prices recover.

Huibert Vigeveno, downstream director at Shell, said the company's gas stations were able to adjust to weaker demand for fuel and capitalize on changing shopping habits by offering more groceries and bakery goods.

"Even with less customers, you're selling a higher basket size," he said in an interview. Customers purchased 15% more when visiting Shell stores in the first nine months of 2020, compared with the same prior-year period.

In the U.K., for instance, drinks and snacks can be ordered from Shell sites via Uber Eats and Deliveroo.

"Before Covid, we were doing home delivery from our retail sites, maybe a couple of hundred world-wide, now we're actually in the thousands and growing," Mr. Vigeveno said. 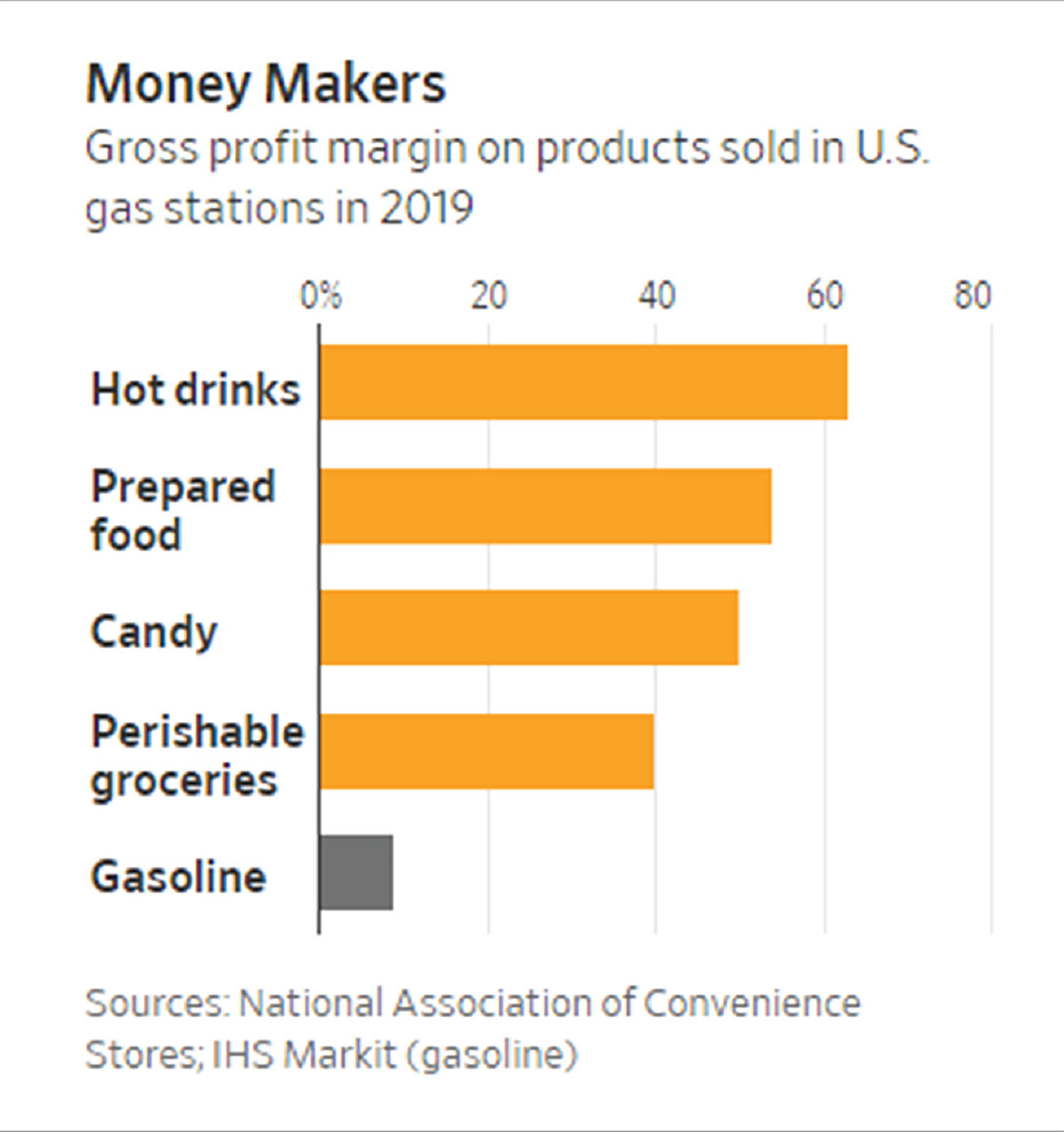 BP's marketing business has also seen opportunities in the pandemic, with the third quarter its best for nearly two years, as strong retail sales offset a 15% fall in fuel volumes.

It also turned to home delivery to boost sales, signing partnerships with delivery app Glovo in Spain and Deliveroo in the U.K. to dispatch items from gas stations.

BP, which also owns Amoco and ampm stores in the U.S., says it plans to invest in proprietary food brands and seek further retail partnerships to boost the profitability of its gas stations and offset a forecast fall in earnings related to fossil fuels.

Overall, both companies say they plan to offer more services at existing sites in established markets like the U.S. and Germany, while adding new locations in developing markets like China, India and Indonesia.

The profit is in the stores rather than fuel sales, and additional services don't need to be profitable if they make customers visit more frequently, said Sabine Benoit, a professor of marketing at the U.K.'s University of Surrey.

"They're moving away from Cokes and smokes, and it's about the on-the-go consumption and fresh food," she said. "A lot of the sales volume comes from fuel, but the profit is in the shop."

Hot food sold at U.S. gas stations has a gross profit margin of around 54%, while candy is 50% and groceries are over 40%, according to 2019 data from the U.S. National Association of Convenience Stores. In comparison, the gross margin on a gallon of gasoline was 9% based on the average 2019 price, according to data provider IHS Markit Ltd.

Still, some analysts are skeptical about how long oil companies' spotlight on retail will last. Retail is only in focus because it is one of the few parts of the business that is making money, said Scott Annan, an independent retail consultant.

During the late 2000s, when oil prices traded over $100 a barrel, major oil companies sold gas stations because they weren't viewed as strategic, he noted.

"The money they were making was much less than the money they could make prospecting for oil," Mr. Annan said.

Electric vehicles also present a new conundrum for gas stations, because charging isn't as lucrative as liquid fuel and it can be done at home or work.

France's Total SE estimates that in Europe only 5% of electric vehicles will charge at gas stations. Still, both Shell and BP plan to add thousands of charging points at existing gas stations and other sites.

BP is also trialing gas stations with no gas.

The company has opened several of what it is calling mobility hubs, including in London and Berlin, which feature services found at filling stations as well as electric vehicles and bikes for hire, charging points and a cafe. The London site doesn't sell liquid fuel.

Some think the pandemic has helped the oil companies prepare for the future.

"Covid-19 was effectively a dress rehearsal," said Frank Beard, a retail consultant. "We already knew there were likely some headwinds coming at fuel demand in future, combustion engines are becoming more efficient and electric vehicles are coming."

Chao Phraya express ferry services have been temporarily suspended on weekends and public holidays, with the operator citing a 90% drop in passengers.