Are 'Luxury Mystery Boxes' the Future of Discount Shopping?
Business

Are 'Luxury Mystery Boxes' the Future of Discount Shopping?

Upstart luxury liquidators like Heat and Scarce are offloading surplus clothing from labels like Off-White and Saint Laurent with a twist: The customers have no idea what they're actually buying

Last year, as part of a wave of retail-store closures, discount retailers Century 21 and Stein Mart filed for bankruptcy. Coronavirus, which slowed Americans' shopping to a crawl, certainly played a part in their fall -- and left many of the brands, stores and factories that had relied on these once-beloved "close-out retailers" holding a surfeit of new clothes that no one was really buying. 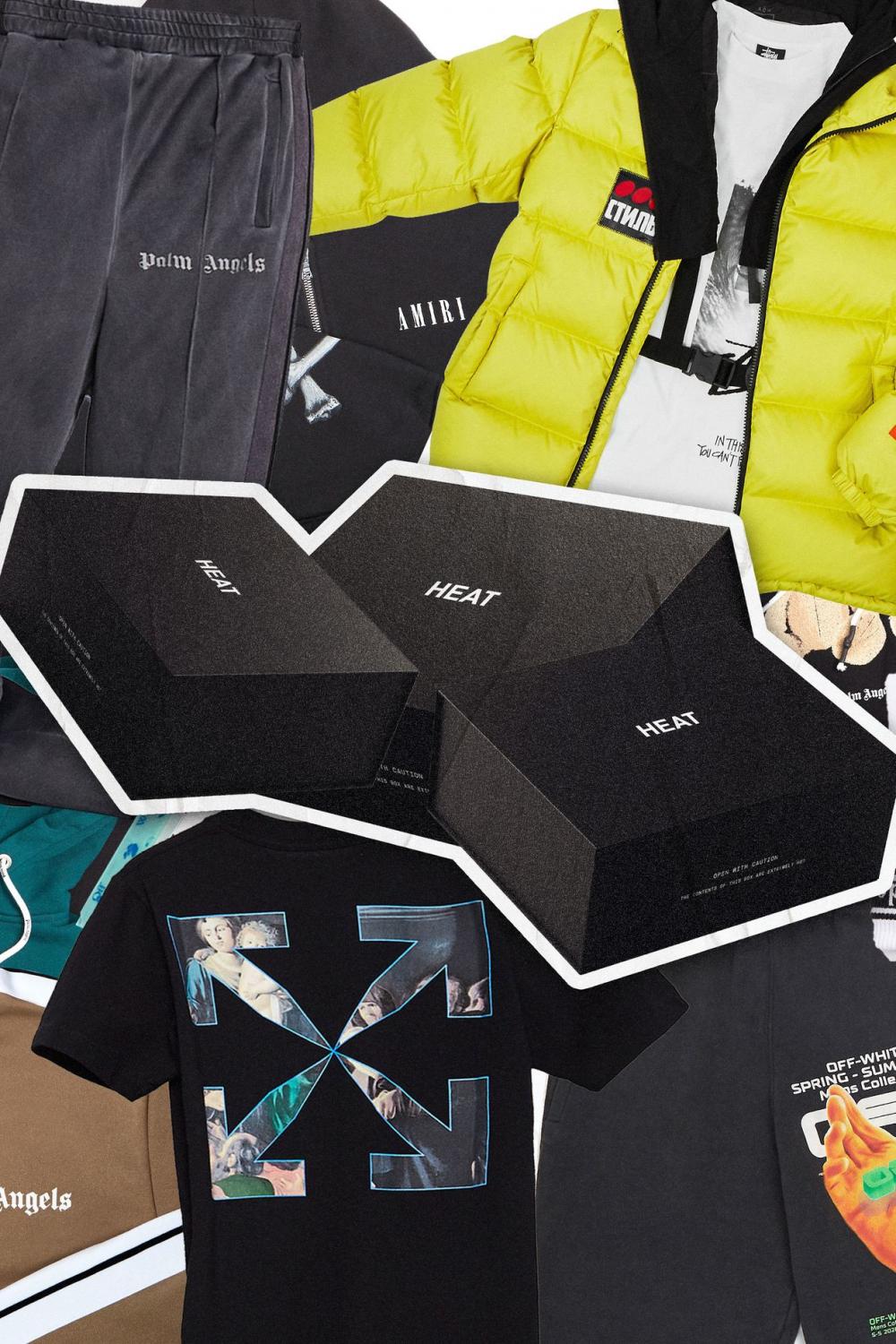 An intriguing new solution for selling overstock, off-season clothing has emerged, however.

Two upstart companies -- Heat, founded in London in November 2019; and Scarce, launched in New York in December 2020 -- offer so-called "luxury mystery boxes" that contain clothing items pulled from the surplus stock of boutiques, brands like Moncler, Balenciaga and Off-White, and even factories.

Collectively, the items originally retailed for two to three times as much, on average, as the box's price. The twist: Until the customers open the box and peek inside, they have no idea what they're getting. That said, boxes are sold by gender, and users can input in advance their pant, shoe and top sizes

Joe Wilkinson, one of the co-founders of Heat, explained that he and his partners came across this surprise packaging concept via YouTube.

They noticed "a bit of a trend" for videos where YouTubers would film themselves opening "mystery boxes" that they'd acquired either from independent fashion resellers or other YouTubers.

In a typical clip, a chatty, college-aged streetwear fan would tear open a box to reveal some rare Adidas, a piece of Yeezy or Supreme merch, or a hard-to-find Palm Angels hoodie.

The videos were like an action flick for sneaker addicts and the "what will they pull out next?" suspense kept fans watching.

Mr. Wilkinson and his peers decided to turn this gamified unboxing idea into a business, catering to millennial and Gen-Z fashion fans who would watch -- or make -- these mystery videos.

For around $400 you can acquire a box containing items like T-shirts and small accessories, while roughly $675 gets you a box filled with higher-value hoodies and outerwear.

When it comes to selecting their box, which can contain two to a handful of items depending on their price, shoppers can also choose between two broad style categories: "streetwear," which encompasses brands like Rhude and Ambush, and "contemporary," which leans on higher-fashion brands like Casablanca and Haider Ackermann.

Both Heat and Scarce allow for returns, but customers must return the entire box, not just a single item. If you receive three items, and you adore just one, you will be saddled with the two other so-so items as well.

Further, both companies require returns within 14 days and expect customers to assume responsibility for any return shipping fees. Perhaps because of this restrictive, cumbersome process, both companies boast low return rates: Heat claims that 10 to 15% of its boxes are returned, while Scarce reports a 5% return rate.

Though most shoppers abhor surprises (even the news that an order will be delayed by a day or two) part of these boxes' appeal is nevertheless the unknowability of what you'll be receiving.

"You are taking a risk because you don't know what's in it, but that's the exciting part," said Macgregor Adams, 21, a college student in Novi, Michigan who has purchased upwards of 10 boxes from Heat.

For other shoppers, pure savings is the main draw.

"It's bang for your buck," said Devin Knight, 20, a student in Marlborough, N.Y., who has purchased two boxes from Scarce, which adopts a similar model to Heat.

Mr. Knight has a "passion for fashion," but as a student on a limited budget, he considers his clothing purchases carefully. He saved up for his Scarce boxes -- spending $698 on a "Luxury Streetwear Box" (containing one to three items), and a whopping $1,998 for an "Outfit Box" (packing four to eight items).

Before users order their boxes, Scarce lets them select their favorite label, and promises to "do its best" to include that brand's pieces in the box.

Mr. Knight opted for Paris-based designer Rick Owens. While all the items he unpacked from both boxes bore the Rick Owens label, the $700 box was a let-down, containing merely a single wool cardigan and a pair of socks.

He was happy, however, with the $2,000 box, which packed two tote bags, pants, a cardigan and a denim jacket.

Mr. Knight speculated that, collectively, the items in the two boxes were worth at least twice what he'd spent.

Though Mr. Knight said he would recommend the service, given that it's a way to buy items from a coveted brand for far less than retail, he actually ended up returning both boxes.

Mr. Knight felt he "could pick out things that better suit [him]" from the brand a la carte, rather than as a set which he would have to keep in its entirety.

Young shoppers often value a brand name even more than the item itself.

Ryan Hildrew, 24, a streetwear collector and air-conditioning engineer in Essex, England, noted that, in the case of many of his peers, "if they know there is going to be a Balenciaga top or a Dior top [in the box], they don't care what it looks like because it says the brand on it."

The YouTube unboxing videos confirm this, documenting various streetwear influencers opening up a box from Heat or Scarce and giddily shouting out "Bro, it's Saint Laurent!" or "Oh, it's Fendi!" as they spot the label, even before it's clear whether the item is a shirt, a pair of pants or a scarf.

This blind faith indicates the trust that young consumers willingly place in their chosen brands.

Mr. Hildrew recently bought a surprise box from Heat orchestrated in collaboration with Represent, a British streetwear label. He is a big fan of Represent so he "knew that whatever was in that box, I [was] going to be pretty much satisfied."

From the start, both Heat and Scarce picked up off-season gear that boutiques couldn't clear out on sale. But both companies acknowledged that the events of 2020 have made this luxury box concept enticing for a broader range of partners throughout the industry.

"When Covid hit there was this massive influx of excess inventory from brands, retailers, factories, houses, wholesalers, all that kind of stuff," said Scarce co-founder Jacob Metzger.

Mr. Metzger and his Scarce partner Yossi Shetrit began working with brands and wholesale distributors in the U.S. and Europe, buying overstock at the source, before it ever even trickled into boutiques or department stores.

Around the same time, Heat experienced a surge of interest from fashion labels looking for help offloading overstock items.

"Brands were coming to us and saying, 'We've seen what you're doing...we want to work with you'," said Mr. Wilkinson.

Heat and Scarce do more than offload excess merchandise. They make it seem sexy. The packaging and marketing from these brands is slick and alluring.

On Scarce's Instagram feed (over 116,000 followers), you'll find the influencer @soberyungwalter holding a Scarce box, as if he'd nabbed the holy grail, while wearing a ghost-white Canada Goose puffer.

The success of these mystery-box companies reflects a fashion economy where consumers no longer value having the hottest, fresh-off-the-runway item the way they once did.

When I asked shoppers like Mr. Knight if they were skeptical about buying off-season gear, they brushed off those concerns, or even said they thought of old clothes as more enticing. As he put it, rather than limiting him to clothes from the newest seasons, Scarce "allows for more of an inclusion and a variety of clothing."