The Labour Ministry will seek cabinet approval for a reduced contribution to the Social Security Fund by employees. (Bangkok Post file photo)

The Labour Ministry will seek cabinet approval for a reduced contribution to the Social Security Fund (SSF) by employees from 3% to 0.5% in February and March to ease the financial plight of employees affected by Covid-19.

Initially, the SSO Board had agreed to reduce contributions to the SSF by employers and employees from 5% to 3% from January to March.

If approved by the cabinet, the 0.5% reduction would apply only to employees' contributions, while contributions by employers will remain at 3%, Mr Suchart said. 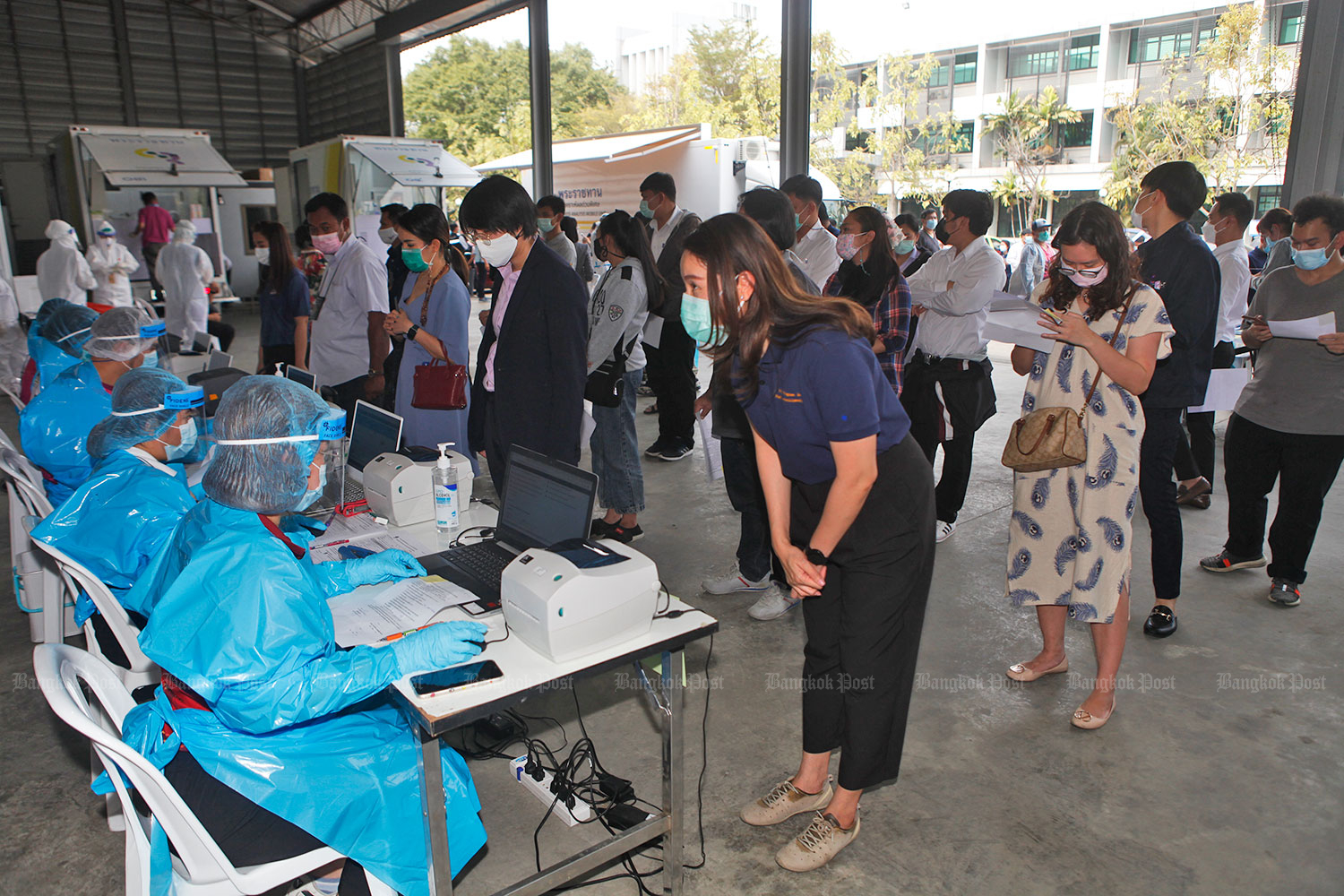 An unscripted moment: Staff at the National Broadcasting Services of Thailand (NBT) line up for Covid-19 testing at their office after a male news anchor at the TV station was confirmed to have contracted the virus yesterday. An investigation and contact tracing are underway to identify who is considered at risk. (Photo by Nutthawat Wicheanbut)

Mr Suchart said the reduced contributions would cost the SSF about 20 billion baht, though employees would have more money in their pockets to spend on essential items, boosting cash in hand for millions of workers during the two-month period.

The proposed reduction of contributions came after the Thai Labor Solidarity Committee (TLSC) on Thursday called on the government to come up with measures to help employees covered by Section 33 of the SSA and state enterprise employees during the pandemic.

Chalee Loysoong, deputy chairman of the TLSC, said that he handed a petition to Finance Minister Arkhom Termpittayapaisith, asking him to step up assistance to them.

Those under Section 33 and state enterprise employees have been left out of the government's Covid-19 relief packages since the pandemic hit the country early last year. 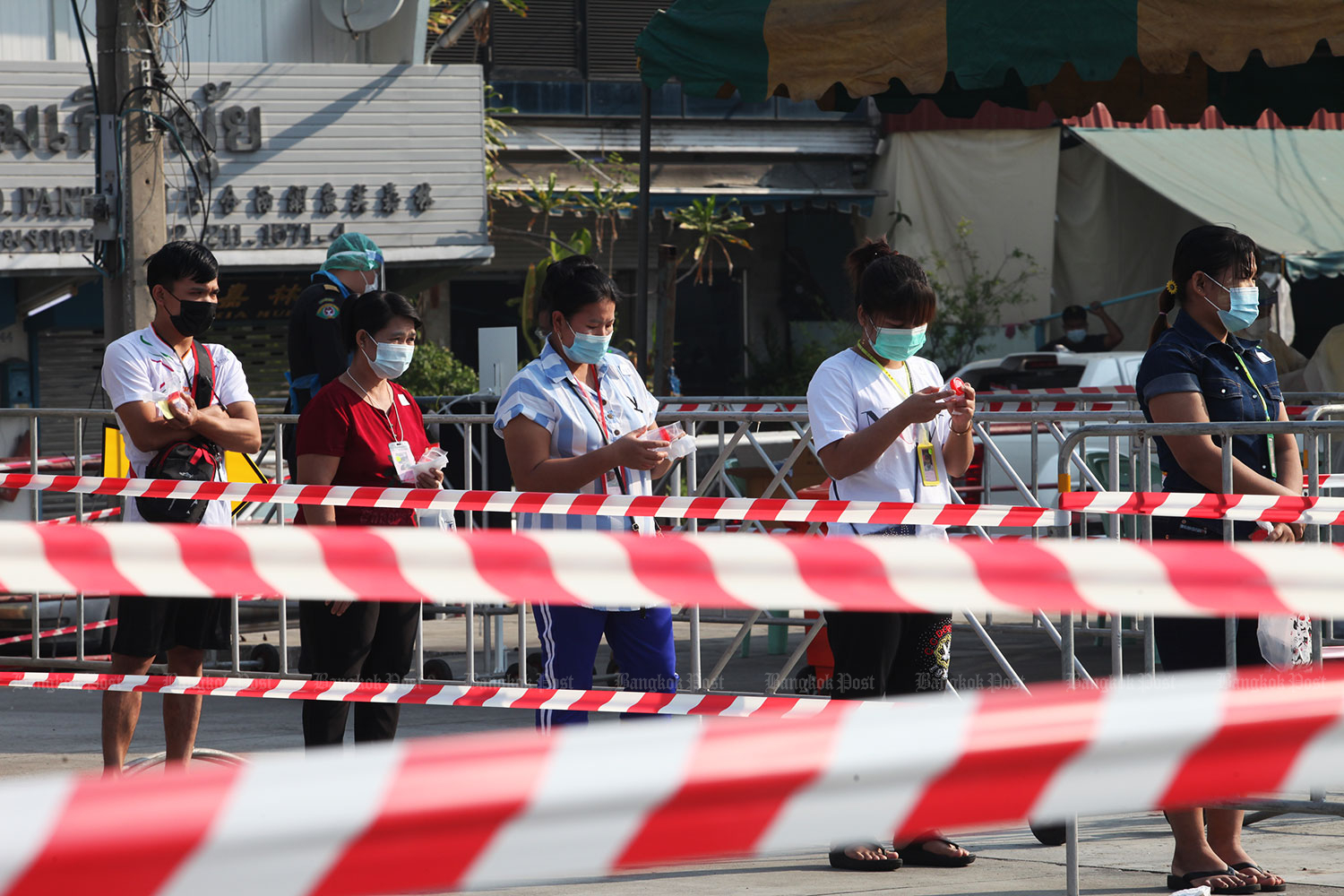 Testing times: Vendors, migrant workers and staff of the Fish Marketing Organization take Covid-19 tests that are being provided at a seafood market in Bangkok’s Sathon district as part of a proactive campaign to screen higher-risk groups during this fresh round of infections. (Photo by Apichart Jinakul)

After the pandemic started to take a toll on the economy in early 2020, the government responded with strict lockdown measures that lasted several months in an effort to curb the outbreak.

It also offered a 5,000-baht transfer to the bank accounts of workers employed in the informal sector.

The monthly stipend ran for three months, from April to June, and was provided to temporary workers, contract employees and self-employed workers not covered by the SSA's Section 33.

Under a new financial aid scheme known as "Rao Chana", the government will provide a total of 7,000 baht per person over two months to cover 31 million people affected by the pandemic. The payments are among a raft of recently rolled out measures designed to ease people's plight, the others being reduced electricity and water bills.

The package does not cover social security subscribers, government officials and state enterprise employees. The government reasoned these two groups are not affected as they still have jobs and income.

"Even though employees under Section 33 still have jobs to go to, they have their work days and overtime pay slashed while the cost of living continues to rise," Mr Chalee said.

"There are about 11 million workers in the social security system and more than four million in state enterprises. Therefore, the government must ensure fairness to all groups."

However, Napaporn Ativanichayapong, an academic at Thammasat University, slammed the proposed reduction of contributions. She said the policy would affect members' SSF pension funds.

"When a crisis arises, past and present governments turn to use money in the SSF as a solution. When the situation improves, they forget to boost the coffers of the old-age pension fund. Insured employees who retire will receive only about 4,000–5,000 baht a month which is not enough."