Tourism holds its breath on vaccines

Suvarnabhumi airport, considered a regional hub, is all but vacant as a result of international travel restrictions. A TripAdvisor survey indicates tourists are inclined to travel to destinations where visitors must be vaccinated before travelling. Somchai Poomlard

As several countries have jump-started inoculation against Covid-19, hopes of re-energising the bruised travel industry are growing in tandem with millions of doses produced by pharmaceutical companies for global distribution.

Questions abound about whether the much-needed vaccines are really a game-changer for international tourism.

The future might be too opaque to forecast, particularly regarding the effectiveness of each vaccine and the time needed to build up herd immunity in vaccinated nations.

As one year without the throng of international tourist arrivals left the majority of Thai tourism businesses wrecked, the Tourism Authority of Thailand (TAT) is preparing to roll out a promotional campaign targeting the international market in the second quarter -- the first movement in more than a year.

TAT governor Yuthasak Supasorn said tour packages to Thailand will be displayed at tour agencies in origin countries, with the main target long-haul travellers who wish to purchase advanced packages for winter vacation.

When drilling down on the major source markets, there are lingering uncertainties that hint vaccines may not create an abrupt change for either Thai or global tourism.

Many of Thailand's top source markets for tourists have started inoculation programmes, but none have determined when or how they will allow citizens to travel abroad after being vaccinated.

The European Commission anticipates 70% of the adult population in the region should be inoculated by the summer of 2021, while European governments are working on the framework of vaccine passports, aiming to enable mass travel within Schengen states first.

As a result, vaccine protocols have some countries worried this will lead to discrimination between people who have already been vaccinated and those who have not.

In 2019, European tourists contributed 448 billion baht to Thailand, putting them second to Chinese tourists in terms of foreign tourism receipts.

Vaccine distribution has also seen slow progress in China. The mainland ranked ninth in terms of doses being administered as of Jan 26, according to Our World in Data, a platform developed by Oxford University.

China expects to vaccinate 50 million people in high-risk groups before the Lunar New Year on Feb 12, a drop in the ocean of its 1.4-billion populace. 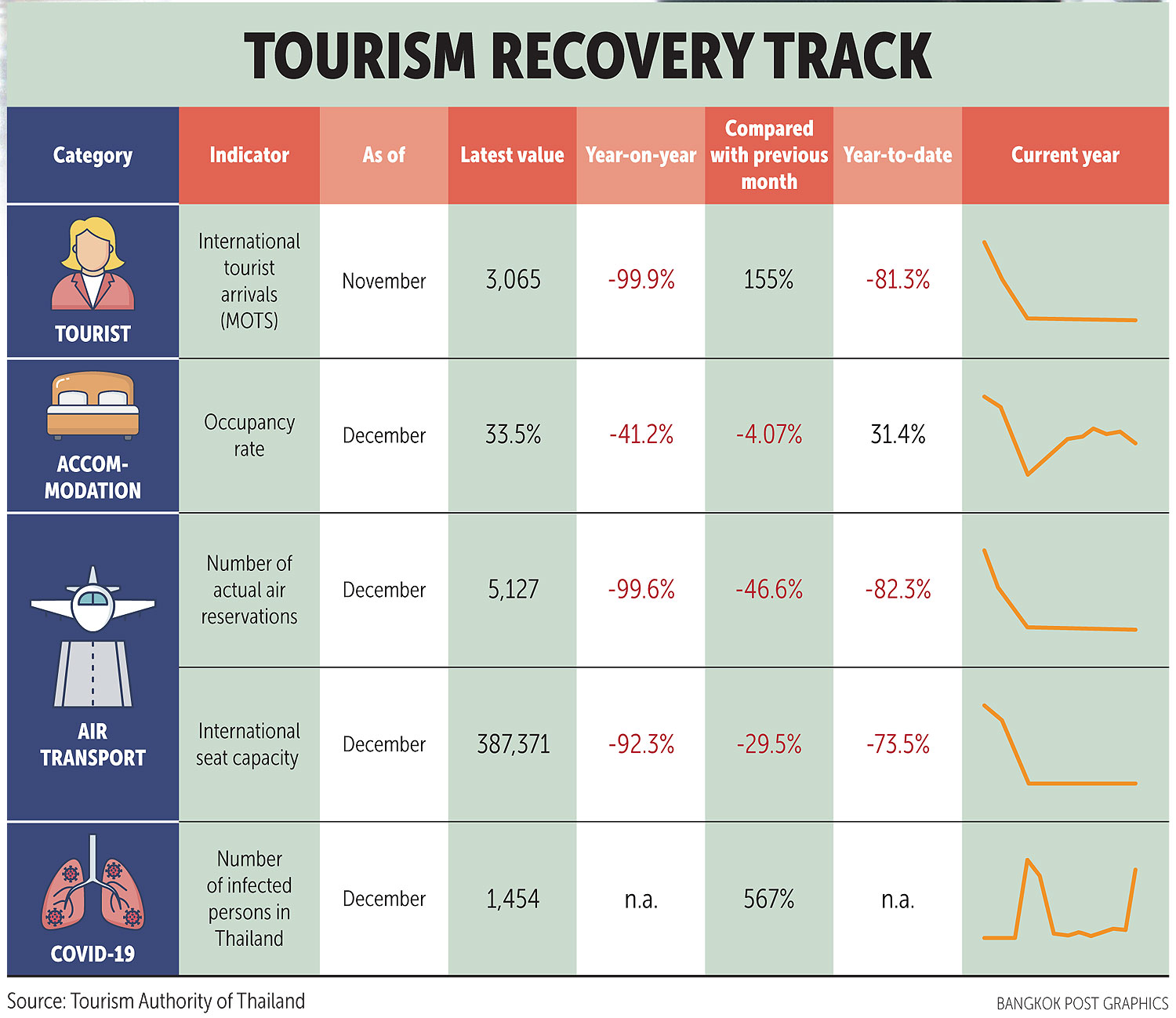 The Korea Disease Control and Prevention Agency aims to have 70% of South Korea's population inoculated by September.

Herd immunity is not expected until at least until November.

Japan presents a more difficult challenge for one of the tourism industry's darling countries, having generated almost 94 billion baht in tourism revenue for the Thai economy in 2019.

The Japanese government reportedly plans to start mass vaccinations in May as the country already secured sufficient doses for its entire population of 127 million.

But according to a report from AP, Japan ranks among the world's lowest in vaccine confidence as only 48% of respondents said they wanted to be vaccinated against Covid-19 -- a dilemma Japan has to solve as the Olympic Games approach.

A high level of ambiguity is not exclusive to vaccine confidence. Thailand, struggling to tame the second-wave outbreak, still doesn't have a reopening plan that includes vaccinations as an entry requirement.

A survey on traveller trends conducted by TripAdvisor this month indicated 26% of global respondents said they would only travel to destinations where visitors were required to be vaccinated before travelling.

This result reinforces that even if vaccines are not a panacea, inoculations could encourage some visitors to venture out again, improving from the dry spell of foreign arrivals last year.

If Thailand misses the vaccination train, it could lead to a huge opportunity loss for the country. 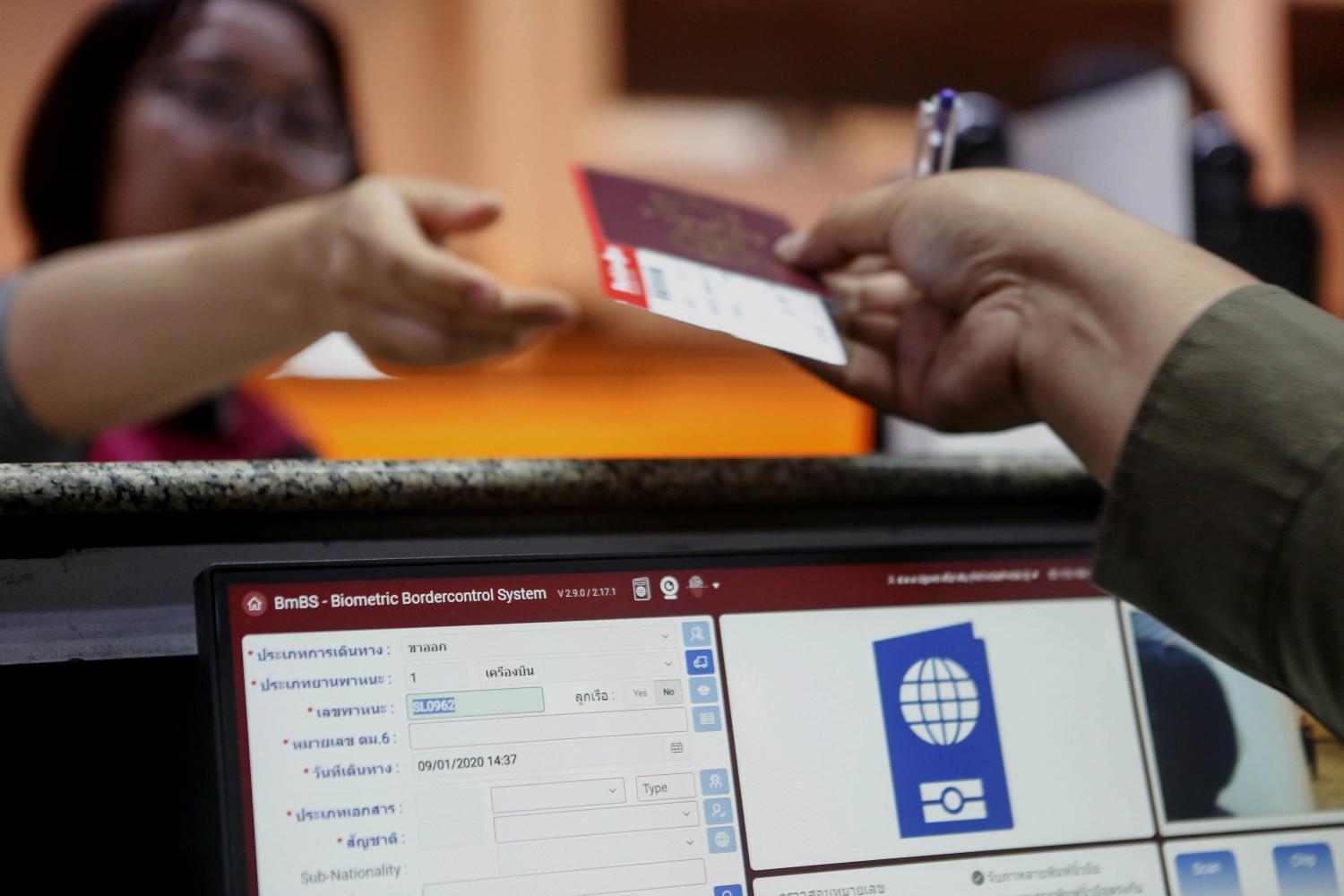 An immigration official at Don Mueang airport hands a passport back to a passenger. Arrivals have declined as quarantine requirements remain an obstacle for leisure travellers.  Pattarapong Chatpattarasill

"Inbound tourism opportunity depends on a clear policy to reopen the country for vaccinated tourists without quarantine, which has to be rolled out by the middle of this year to signal tourists and operators to be prepared," said Vichit Prakobgosol, president of the Association of Thai Travel Agents.

He said Singapore is considering implementing more relaxed travel restrictions for people who have been vaccinated if there is more evidence on vaccine efficacy in lowering virus transmission.

Inbound arrivals to Singapore have to complete a stay home notice (SHN), which requires a 14-day or seven-day self-isolation for travellers from low-risk countries at their place of residence, and a polymerase chain reaction test at the end of the SHN period.

Mr Vichit said the number of international arrivals can reach the target of 10 million this year if the government decides to allow quarantine-free travel to visitors who are inoculated.

The quarantine requirement is the main obstacle deterring leisure travellers, especially from short-haul markets that tend to travel for under seven days, he said.

There is a minor risk of exposure from international arrivals who are already vaccinated, but they still must strictly comply with other safety measures including wearing masks while travelling, said Mr Vichit.

Most importantly, the public must accept that while no vaccine is 100% effective, most of them help to substantially reduce the virus spread, which improves the situation, he said.

As vaccinations are beginning during the first quarter in many countries, the plan to welcome inoculated travellers must start with monitoring the situation and side effects, both in at home and abroad, said Mr Vichit.

The objective is to create a shortlist of low-risk countries that Thailand can start bilateral agreements with on travel bubbles.

The first stage of travel bubbles should start by mid-year to allow greater flow of tourists from the third quarter, he said.

Quarantine-free travel bubbles can start within Asia, or with countries that have high numbers of inoculated tourists such as the US, said Mr Vichit.

Thailand ordered Covid-19 vaccines for 50-60% of its population, with the first jabs expected to start next month.

Mr Yuthasak of the TAT said vaccines will be a game-changer for the tourism industry and the government should seize this opportunity by drawing up entry rules for vaccinated travellers by the third quarter.

"Mechanisms such as vaccine passports can boost tourism confidence," he said.

"The tourism and sports minister has floated this idea and asked related agencies to hold discussions with other national tourism organisations in Southeast Asia to weigh the possibility."

But the details on entry requirements, such as whether tourists are required to quarantine, the Public Health Ministry decides.

Enabling vaccinated foreigners to enter the country is considered a way to normalise travelling, which will maximise competitiveness once international tourism activities resume, said Mr Yuthasak.

Marisa Sukosol Nunbhakdi, president of the Thai Hotels Association, said vaccines are certainly a game-changer, but their distribution might not be fast enough to revive the tourism industry to the level of 2019.

The key component following a mass vaccination programme is practical measures to bring back international guests who are inoculated against the virus.

"If Southeast Asian countries can start working on a vaccine passport framework this year, everyone stands to benefit from the cooperation as people can travel more freely between member countries," said Mrs Marisa.

"Because the 10 Asean countries vary in vaccination readiness, Thailand should consider bilateral agreements with a few countries first."

Yet a vaccine passport will not be successful if the mandatory quarantine remains unchanged, she said.

Even if the isolation period is reduced to 10 days from 14, it remains an obstacle for short-stay visitors, said Mrs Marisa. 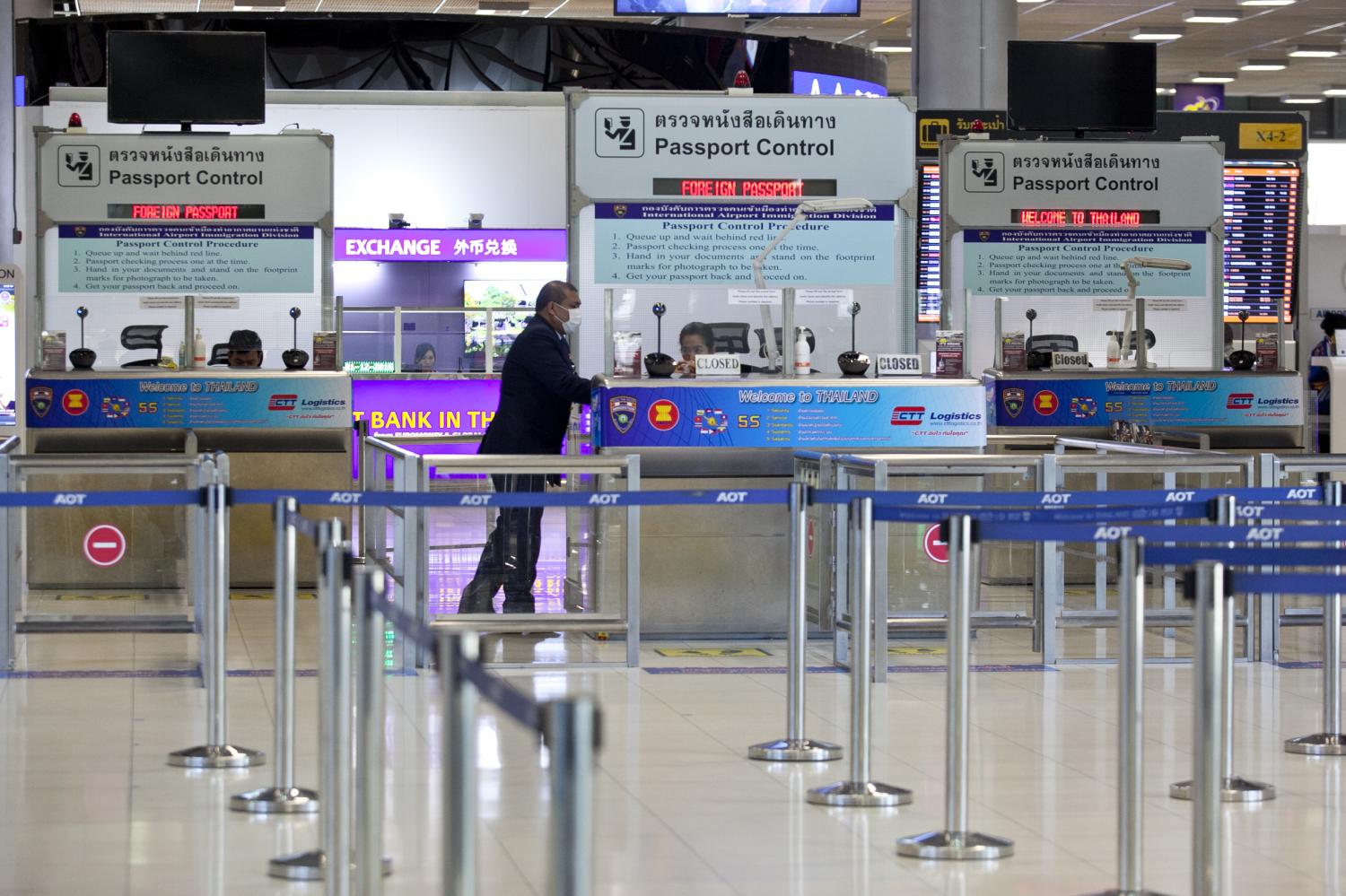 Suvarnabhumi International Airport is deserted amid the decline in international tourist arrivals, as quarantine requirement remains as an obstacle for leisure travellers. File photo by Krit Promsaka na Sakolnakorn

The World Expo is a large event that showcases achievements of participating countries.

This largest exposition on the planet serves as a draw for visitors and tourists to the host country and participating nations in the future. The show is a key global event for the tourism industry.

World Expo 2020, which was due to be held in Dubai from October 2020 to April 2021, has been postponed to October this year because of the pandemic.

Nuttapon Nimmanphatcharin, president of Depa, said the government approved a budget of 887 million baht for activities at the expo.

The construction of the Thai pavilion is 80% complete, in line with other countries' progress, he said.

As the ongoing pandemic shows no sign of subsiding, concerns have been raised as to whether the expo will be held as planned in October.

But Mr Nuttapon said "the United Arab Emirates [UAE] continues to confirm the expo will be officially launched in October."

Exhibitors have to keep abreast of the host's decisions, especially six months before the event, he said.

According to Mr Nuttapon, the Thai pavilion is divided into four zones: Thailand's historic development; refurbished infrastructure under the Royal Chakri Dynasty; digital economy projects; and development in the country.

Citing the UAE's latest email, he said the host plans to keep all the pavilions in the show for 4-5 years as a tourist attraction and for educational purposes, marking the first time the host is keeping the pavilions for an extended period. 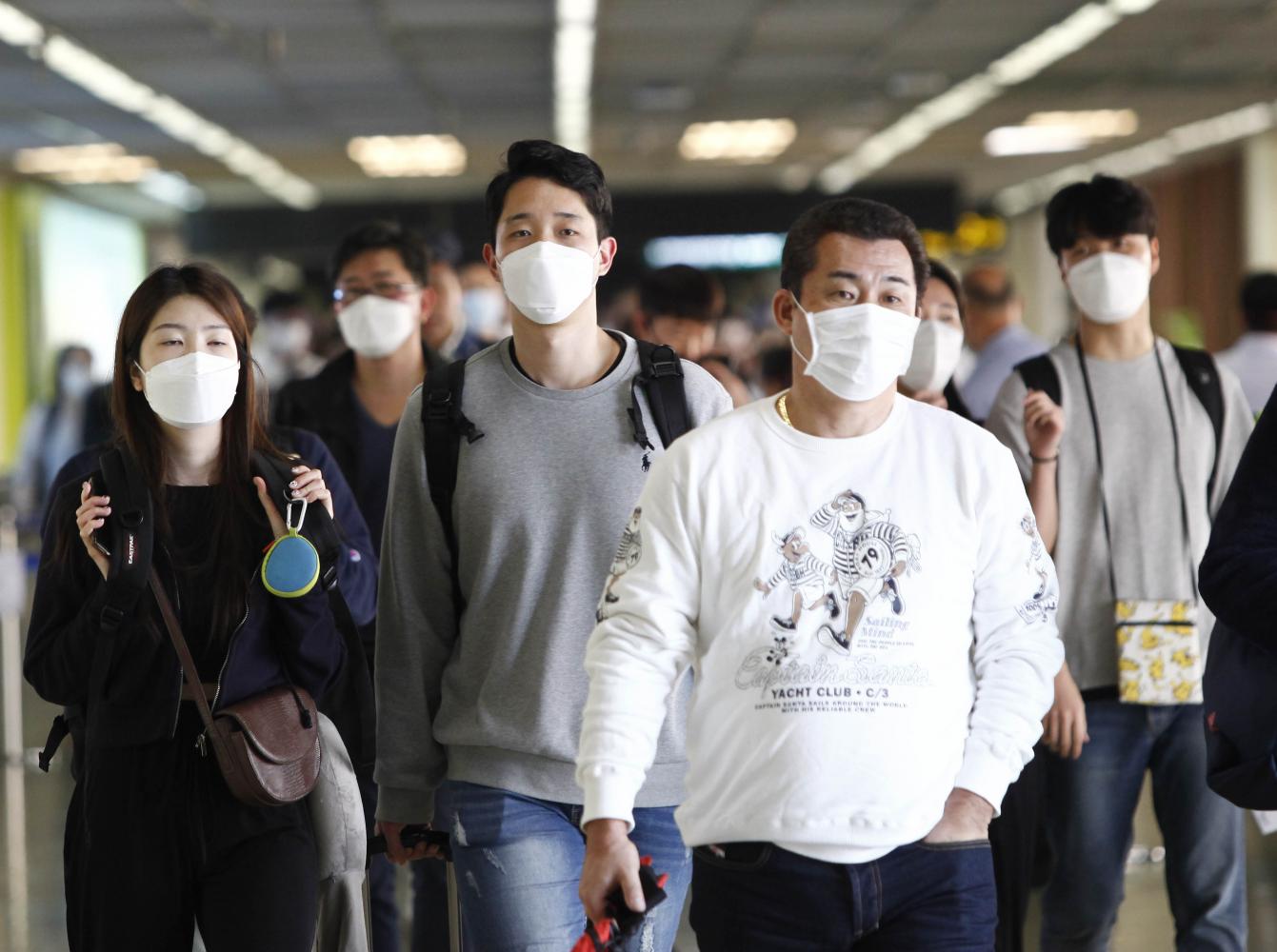 TripAdvisor survey indicates that travellers are inclined to travel to destinations that required visitors to be vaccinated before travelling. File photo by Pattarapong Chatpattarasill 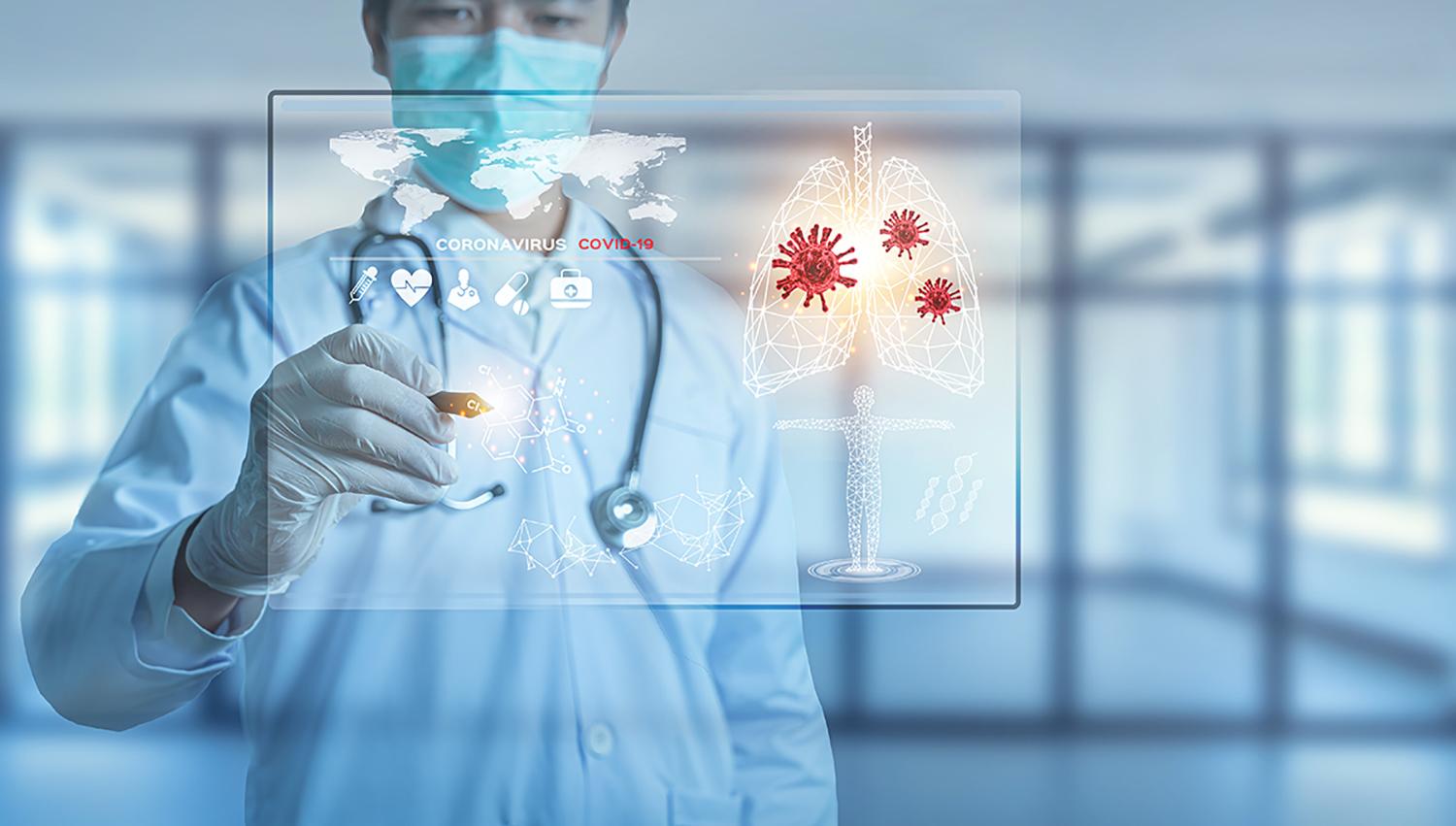 TripAdvisor survey indicates that travellers are inclined to travel to destinations that required visitors to be vaccinated before travelling. 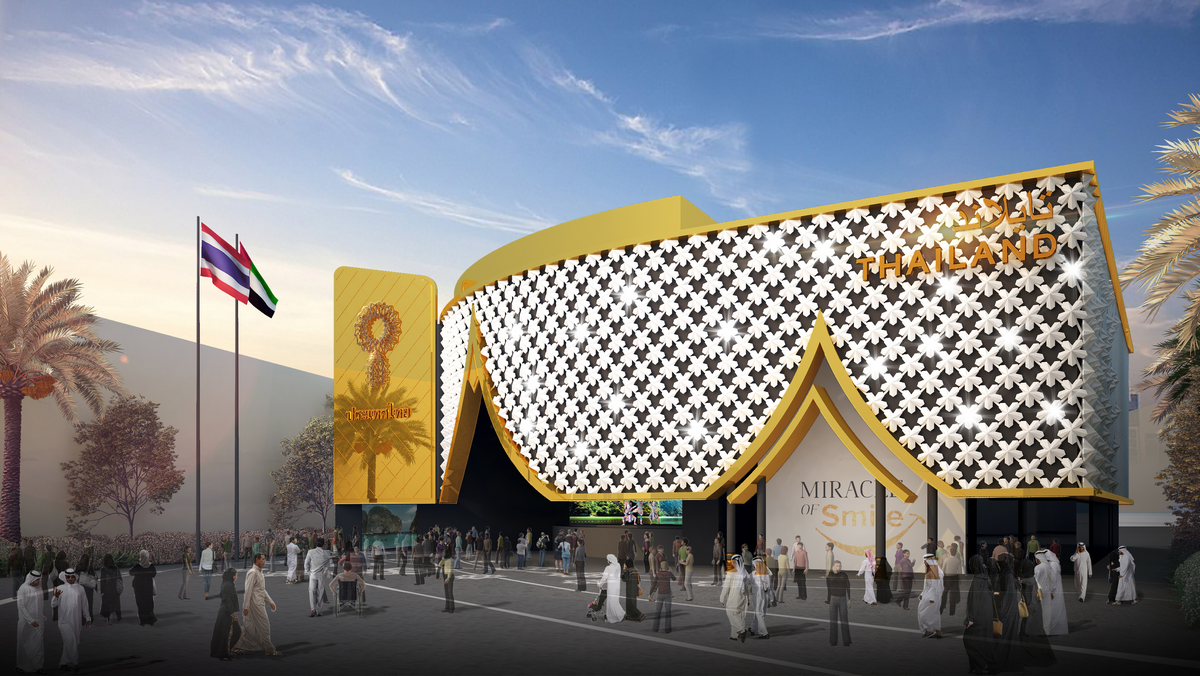 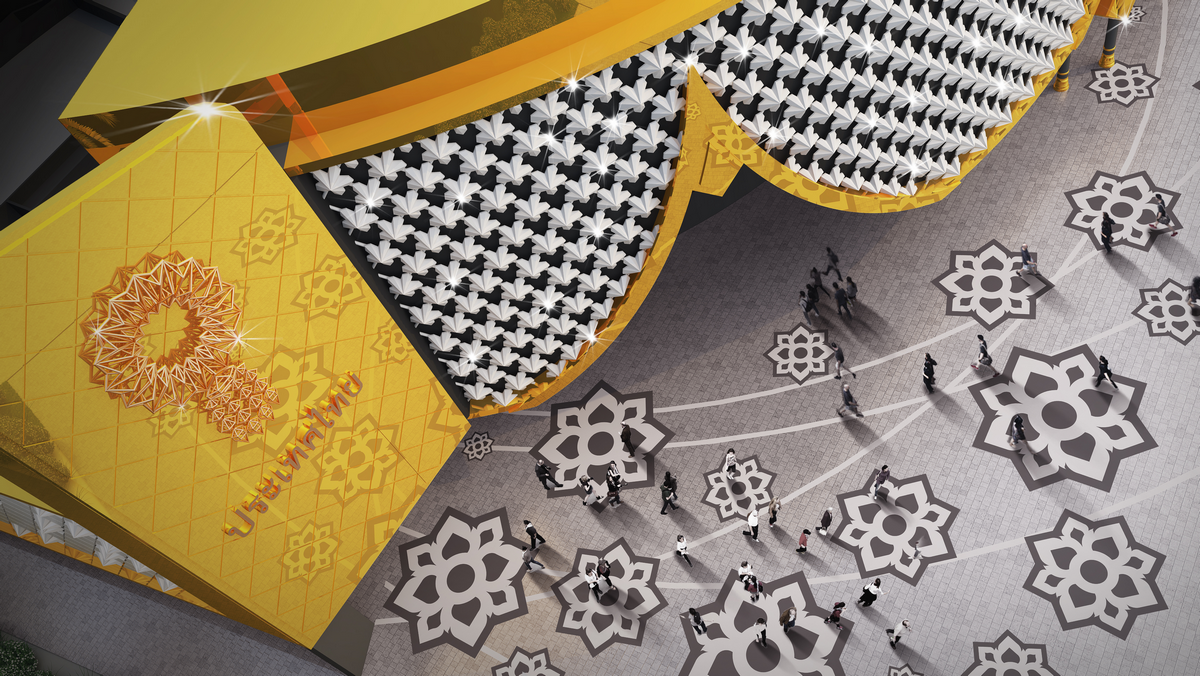 BEIJING: The Chinese province of Henan has ordered its nearly 100 million people to take a Covid test every two days, an unprecedented step as the country grapples with an Omicron-fuelled surge.