The state planning agency National Economic and Social Development Council (NESDC) has downgraded its economic growth forecast for this year to 2.5-3.5% from 3.5-4.5% made in November, mainly because of a fresh wave of infections. 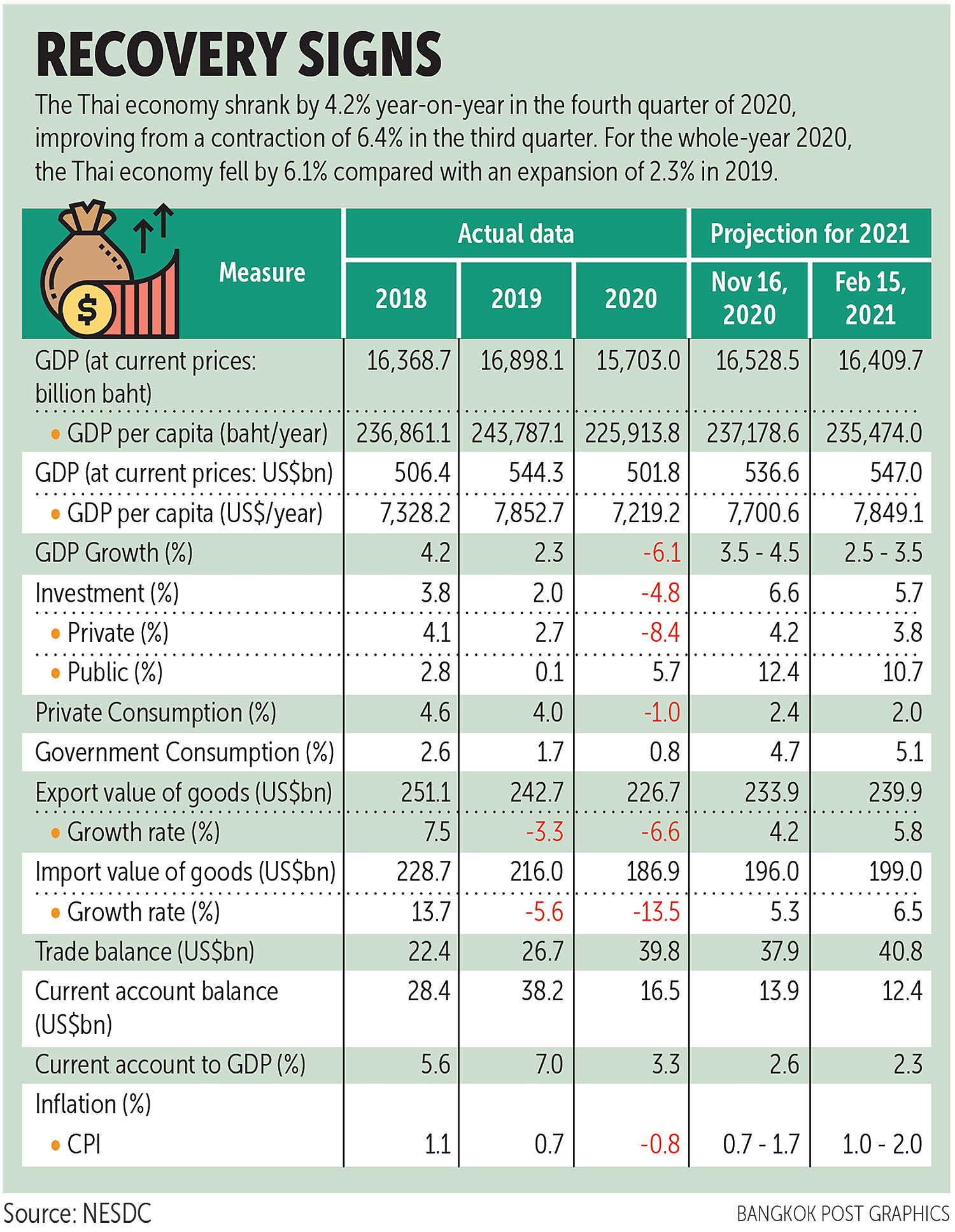 The downgrade comes despite the latest data showing the economy shrank less than expected in the fourth quarter of last year as a result of expansions in private consumption and government expenditure, following the improvements in investment and exports of goods.

"The downgrade is also based on the Thai economy's prospects in the first quarter, which are expected to remain affected by the new infections, particularly in the service and tourism sector," he said.

The government think tank has lowered overall investment to 5.7% growth this year from the earlier-projected 6.6%, with public investment cut to a 10.7% rise from the previous projection of 12.4%.

Private investment was also revised down to 3.8% from 4.2% in the previous forecast.

Private consumption expenditure was expected to grow by 2%, down from 2.4% in the previous estimate. The resurgence of domestic infections since December affected consumer confidence and has led to partial containment and lockdown measures in some areas with highly infected cases.

Nonetheless, the export value of goods in US dollar terms is forecast to grow by 5.8%, up from a 4.2% expansion in the previous projection.

"Exports will return to become one of the key contributors to the Thai economy this year due to the growing economy and global trade," said Mr Danucha.

He said the NESDC is calling on the government to speed up containing the outbreak and acquire sufficient vaccines for mass distribution in order to build herd immunity, as well as prioritising vaccinations in key tourism destinations and manufacturing production bases.

The government is also being urged to preserve the domestic political environment, support sectors experiencing limitations in recovery (particularly tourism and related services that are still hamstrung by international travel restrictions) as well as provide additional measures for small and medium firms, maintain economic growth momentum by supporting from public consumption and investments and stimulate export of goods.

Lastly, the government is advised to prepare for re-opening to foreign tourists, arrange preemptive measures for risks of drought and the resulting impact on farmers' income and monitor and prepare to cushion against the impact of global economic and financial fluctuations, which remain highly volatile and may affect the economy, along with maintaining domestic economic stability.

The NESDC reported yesterday the economy in the fourth quarter of 2020 declined by 4.2% year-on-year, improving from a contraction of 6.4% in the previous quarter, the 12.1% fall in the second quarter and the 2.1% drop in the first quarter.

After being seasonally-adjusted, the economy grew 1.3% quarter-on-quarter from the third quarter. For the full year 2020, the economy shrank 6.1%, compared with growth of 2.3% in 2019.

Last year's 6.1% contraction was the worst full-year performance in 22 years since the 7.6% decline in 1998 as a result of the Asian financial crisis.

"Domestic vaccination rollout should support the outlook, [but] Thailand has yet to start vaccinations," said Mr Tim.

Thailand recently announced plans to inoculate 1 million of its most vulnerable people by May and start mass vaccinations in June, with the aim of administering 10 million doses a month. A further fiscal stimulus to resuscitate the lethargic economy could face hiccups because of limitations related to the public debt ceiling.

"While the Bank of Thailand has clearly called for further government stimulus, we believe room for further fiscal policy is shrinking as public debt approaches the legal ceiling. This could further complicate Thailand's economic recovery, in our view."