Thai Airways International aircraft are parked at Suvarnabhumi airport after most of the fleet was grounded last year. (Photo by Wichan Charoenkiatpakul)

THAI and its subsidiaries earned combined revenue of 48.3 billion baht with expenses totalling 96.4 billion baht between them.

That resulted in an operating loss of 48.1 billion baht and translated into a net loss of 141.1 billion baht last year, said Chai Eamsiri, executive vice president of THAI's Finance and Accounting Department.

Last year, THAI and its subsidiaries recorded a 73% drop in Available Seat Kilometers (ASK) and a 78% fall in Revenue Passenger Kilometres (RPK). 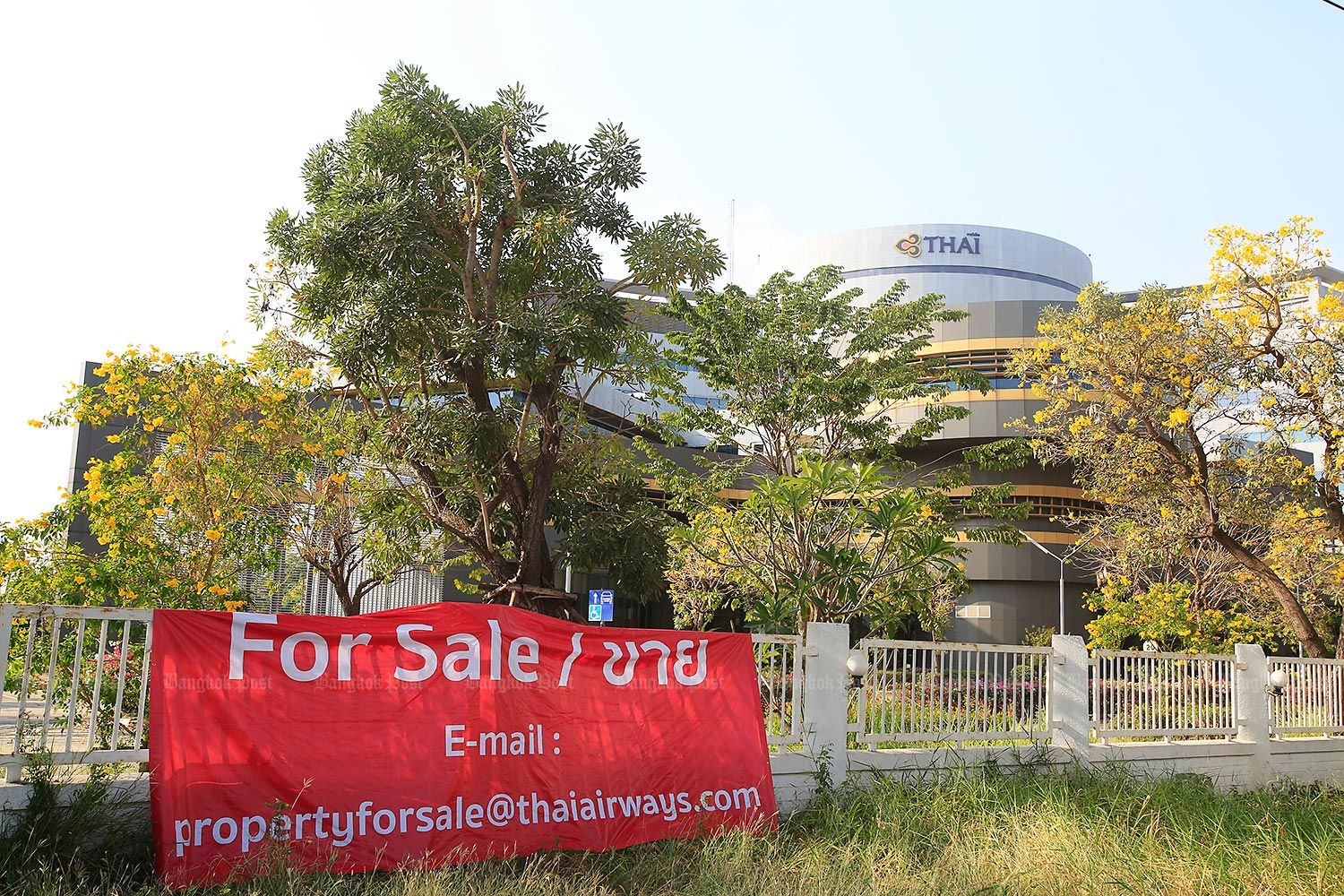 Looking for new owners: A sign hangs from a fence advertising the sale of the Thai Airways International crew training centre in Laksi district. The struggling airline is selling the property to raise cash to shore up liquidity. (Photo by Pornprom Satrabhaya)

According to aviation website airlinegeeks.com, ASK refers to "the total number of passenger kilometres that could be generated to determine the amount of revenue", while RPK "shows the number of kilometres travelled by paying passengers".

Most passengers were flown before the Covid-19 outbreak caused the airline to ground its entire fleet in April last year.

Cargo transport, one of the few remaining generators of revenue for the airline, reported an average freight load factor of 58% last year, an improvement from 53% in 2019.

Mr Chai also outlined one-time expenses totalling 91 billion baht, which he insisted were "accounting figures" with no impact on the airline's cash flow.

Representing the lion's share of the expenses were the impairment losses on aircraft and rights-of-use for assets and aircraft spare parts. This portion of the expenses alone cost 82 billion baht.

The airline has introduced aggressive cost-cutting measures to keep it afloat, including the leave-without-pay and retrenchment schemes.

The programmes are proceeding as the airline works to submit its debt rehabilitation plan to the Central Bankruptcy Court (CBC) before its March 2 deadline.

THAI's rehab plan may be amended after submission to the CBC and it may entail recapitalising the embattled airline to keep it afloat while its debt woes are being fixed, according to Krisada Chinavicharana, the finance permanent secretary.

The rehab plan, even after it is filed with the CBC, is liable for changes that would make it acceptable to all parties and creditors, Mr Krisada said.

The CBC on Sept 14 last year ordered the airline to prepare its rehab plan. THAI's total liabilities stood at 338.9 billion baht against total assets of 298.9 billion as of Sept 30.

The global airline industry is not expected to turn cash positive until 2022, according to a new analysis by the International Air Transport Association (IATA).

A previous analysis in November indicated that airlines would be cash positive in the fourth quarter of this year. At the industry level, airlines are now not expected to turn cash positive until 2022.

Estimates for cash burn in 2021 have ballooned to a range of US$75 billion to US$95 billion from the previously anticipated US$48 billion.

The gloomy outlook is attributed to governments tightening travel restrictions in response to new coronavirus variants.