main photo  The Fuxin Farm is seen in this aerial photograph taken in Longyan, Fujian province.

The battle to supply 1.4 billion people with fresh fruit and vegetables is taking China's e-commerce companies into the country's hinterlands, where they are attempting to revolutionise centuries-old agricultural practices to secure future supply for their burgeoning online grocery businesses.

Xi Jinping's government has long made self-sufficiency in food a "top state issue" as it seeks to avert a looming food crisis.

The need to modernise China's 200 million largely small-scale farms took on added urgency during the pandemic, when output and logistics disruptions coincided with homebound shoppers turning to Alibaba Group Holding Ltd and other internet retailers for their produce. 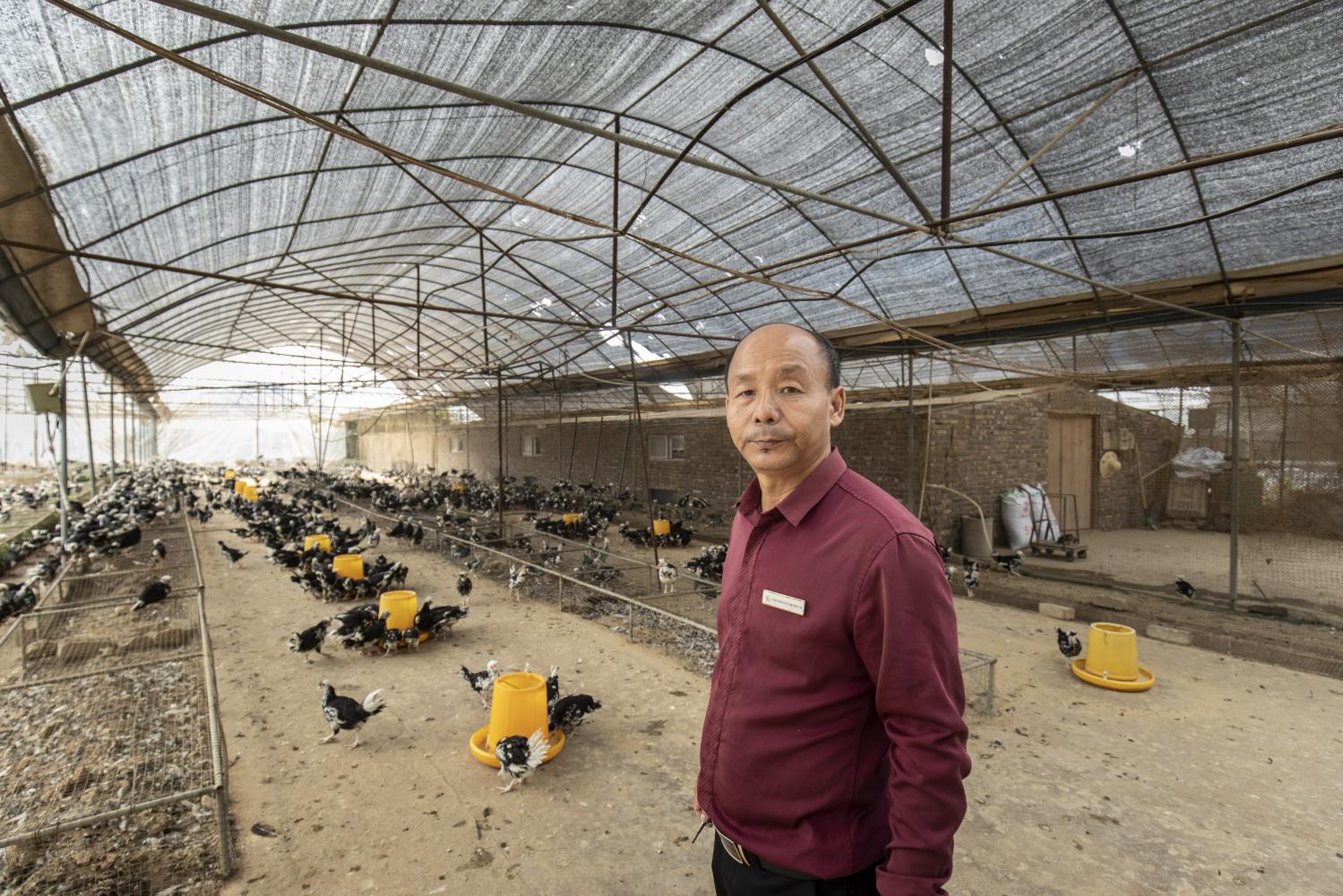 Now, some of the country's largest private companies have joined in with state efforts to help growers boost production, improve food quality and lower prices.

For the e-commerce giants, it's one way of strengthening their foothold in an online grocery market that's expected to be worth more than $120 billion by 2023, without running afoul of Beijing's recent crackdown on monopolistic practices like predatory pricing and forced exclusivity arrangements.

In Fujian along the eastern coast, Alibaba has provided chicken farmers with smart bracelets that track the health of their poultry, while under JD.com Inc's guidance, rice growers in China's arid north have installed smart sensors to gain real-time insights for irrigation. Out west, scientists in Yunnan are teaming up with Pinduoduo Inc to use artificial intelligence to automate strawberry planting. 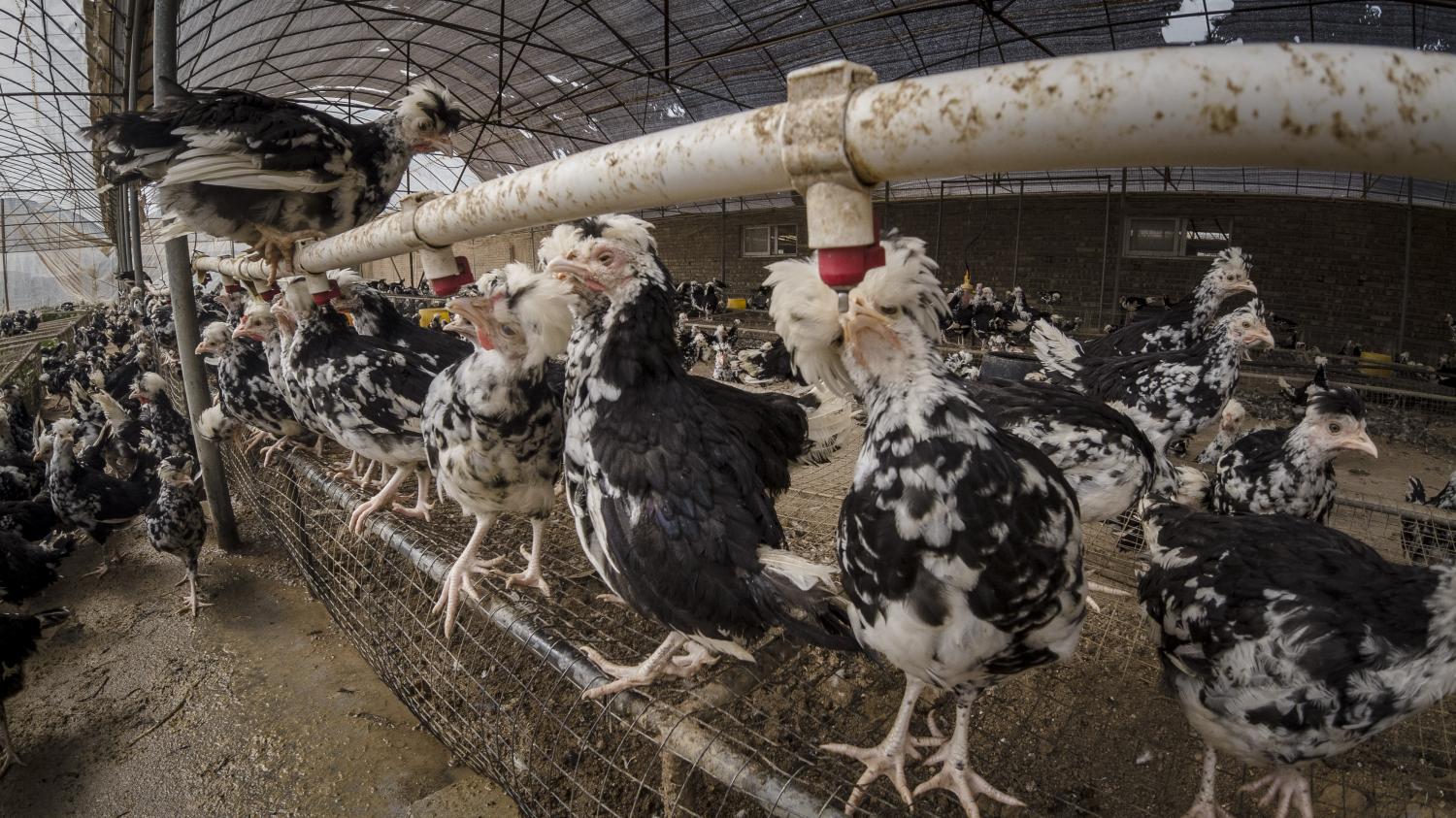 below  Chickens drink from a nipple drinking system inside the shed.

"Agriculture is a critical area supported by the Chinese government," said Liu Yue, an analyst with market research firm EqualOcean.

"With rural youths flocking to cities for better jobs and food safety increasingly threatened by pesticides and outdated farming methods, the country's tech champions are eager to lend Beijing a hand,'' she said.

The driving force behind the e-commerce platforms' push into smart agriculture is the boom in online groceries, which is expected to double to about 820 billion yuan ($127 billion) by 2023 from last year, according to iResearch. 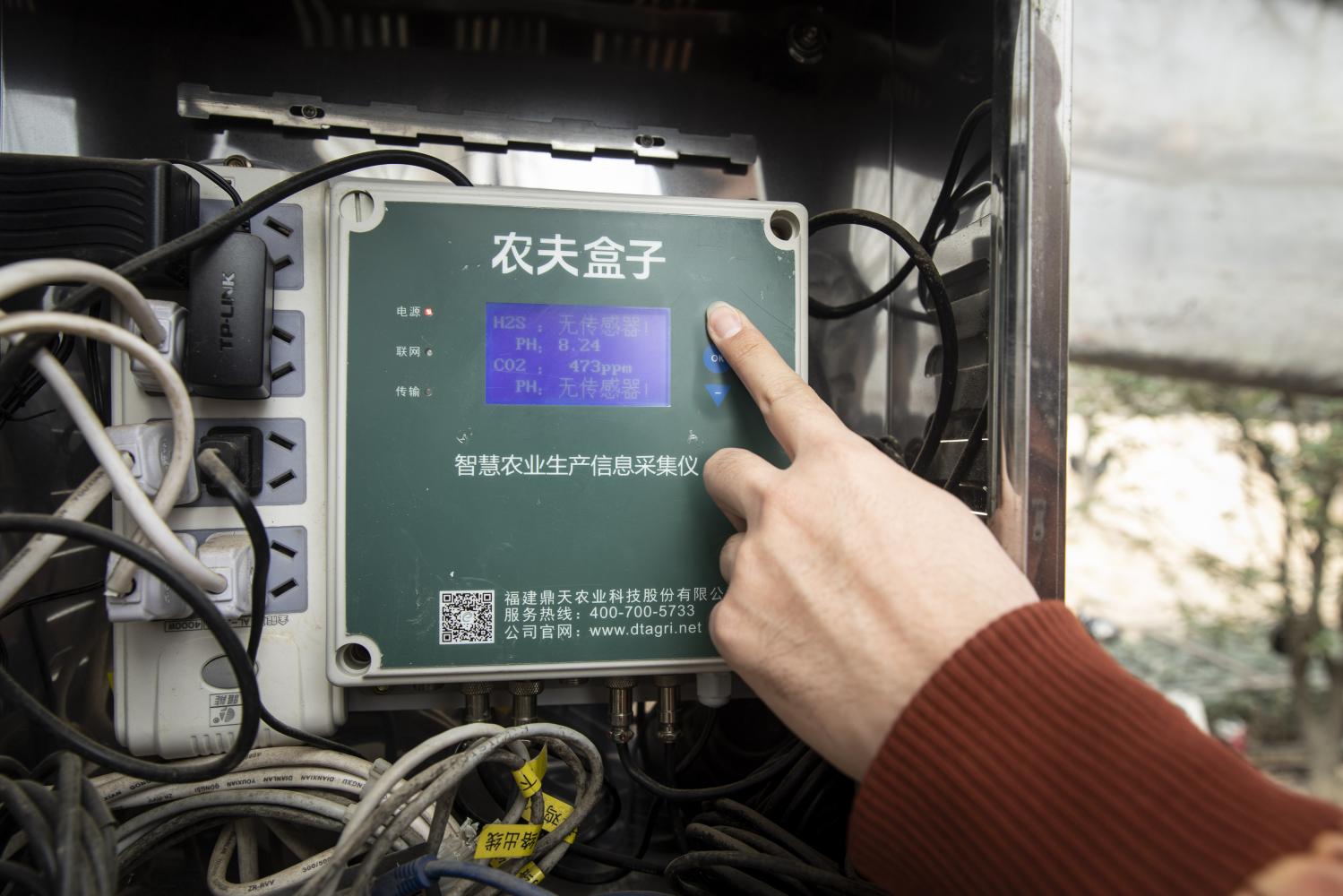 The category overtook consumer electronics as the biggest contributor at JD.com in the first half last year, while Alibaba is making a bigger push into the business by taking a larger stake in hypermart Sun Art Retail Group Ltd.

Meanwhile, a clutch of smaller rivals ranging from Xingsheng Youxuan and MissFresh -- both backed by Tencent Holdings Ltd -- to Dingdong Maicai are in the process of raising billions of dollars to grab larger shares of the online fresh foods distribution market.

That prompted state media to warn in December against overcrowding in the sector, saying instead that internet giants with immense data and advance algorithms should do more in technology innovation.

"Covid-19 has helped accelerate the conversion of such purchases to online channels," said Vey-Sern Ling, an analyst with Bloomberg Intelligence. "It's a large untapped market, and the companies have to participate or be left behind." 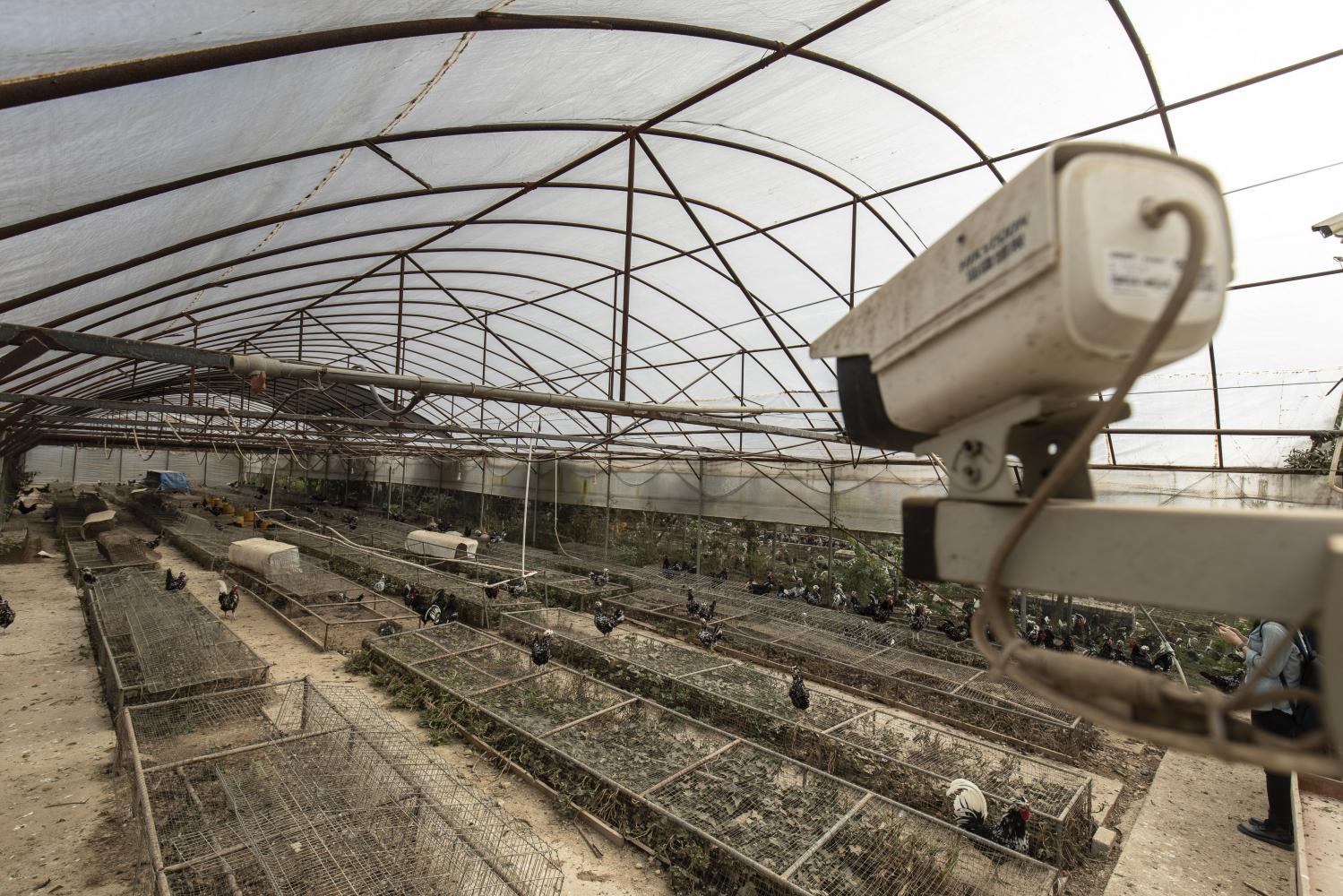 A surveillance camera monitors chickens inside a shed at the farm.

At a time when Chinese leaders are clamping down on monopolies in areas from fintech to e-commerce, smart agriculture is one sphere where the tech giants' commercial interests are aligned with the national agenda.

Breeding and cultivation sciences were also listed as one of Beijing's top tech priorities for the next five years, alongside AI, quantum computing and computer chips.

JD has said its smart farm projects are at least 50% funded by government subsidies.

Despite the efforts, the growing appetite for fresh fruits and vegetables has left most of China's traditionally labour-intensive farms -- roughly 98% of the 200 million operators are families or small businesses -- struggling to keep up.

The country's restrictions on land ownership and diverse terrain spanning the steppes of Inner Mongolia to the tropical shores of Hainan island in the south make it difficult to implement the industrial-scale farming that's commonly seen in the United States and Europe.

Data from the National Bureau of Statistics also show that about a third of farm workers are aged 55 or older, and the birthrate is at record lows, driving labour costs higher.

Lei Jinrong is one farmer who's benefited from partnering with the online retailers.

The owner of Fuxin Farm in Fujian province has equipped 1,000 of his chickens with Apple Watch-style bracelets supplied by Alibaba.

"The devices digitally track the number of steps the birds take each day and anything below 20,000 would be an early sign of illness,'' he said, adding that "he no longer needs to patrol his fields in search of sick poultry.''

The grower has also deployed street lamp-like devices that monitor air temperature, humidity and the level of toxic ammonia gas generated from bird waste, all displayed in real-time on a computer screen at his office.

That has enabled Lei to expand production without hiring more workers -- good news as average salaries in his village have almost quadrupled over the past decade.

In the eastern province of Shandong, peach farmers increased revenue by 50% last year after using JD's blockchain technology to encrypt each step of the planting process and increase trust and transparency, attracting consumers long weary of food scandals from tainted milk powder to imitation eggs.

"The improved efficiency and the economies of scale will drive down costs while higher-quality produce will yield better prices," said Charlie Chen, head of consumer research at China Renaissance in Hong Kong.

"This will benefit both farmers and the e-commerce operators,'' he said.

Pinduoduo, which raised $6.1 billion in November in part to finance its agricultural innovations, is counting on these efforts to help it quadruple sales of farm products to one trillion yuan by 2025.

The company expects the initiatives to help it diversify beyond online retail, as it aims to license cutting-edge farming technology down the road, according to David Liu, vice president of strategy.

Many of these initiatives are still in their infancy and scaling up will take time, as farmers have only recently started to collect data -- the foundation of running AI and other next-generation technologies -- and test new methods of growing.

But the twin drivers of surging demand for online produce and Beijing's push for self-sufficiency in food supplies means the tech behemoths' forays into modernising China's farms have only just begun.

"Smart agriculture is really the way to move forward," said Lei, the chicken farmer. "We all have to innovate."