In line with central bank's requirement 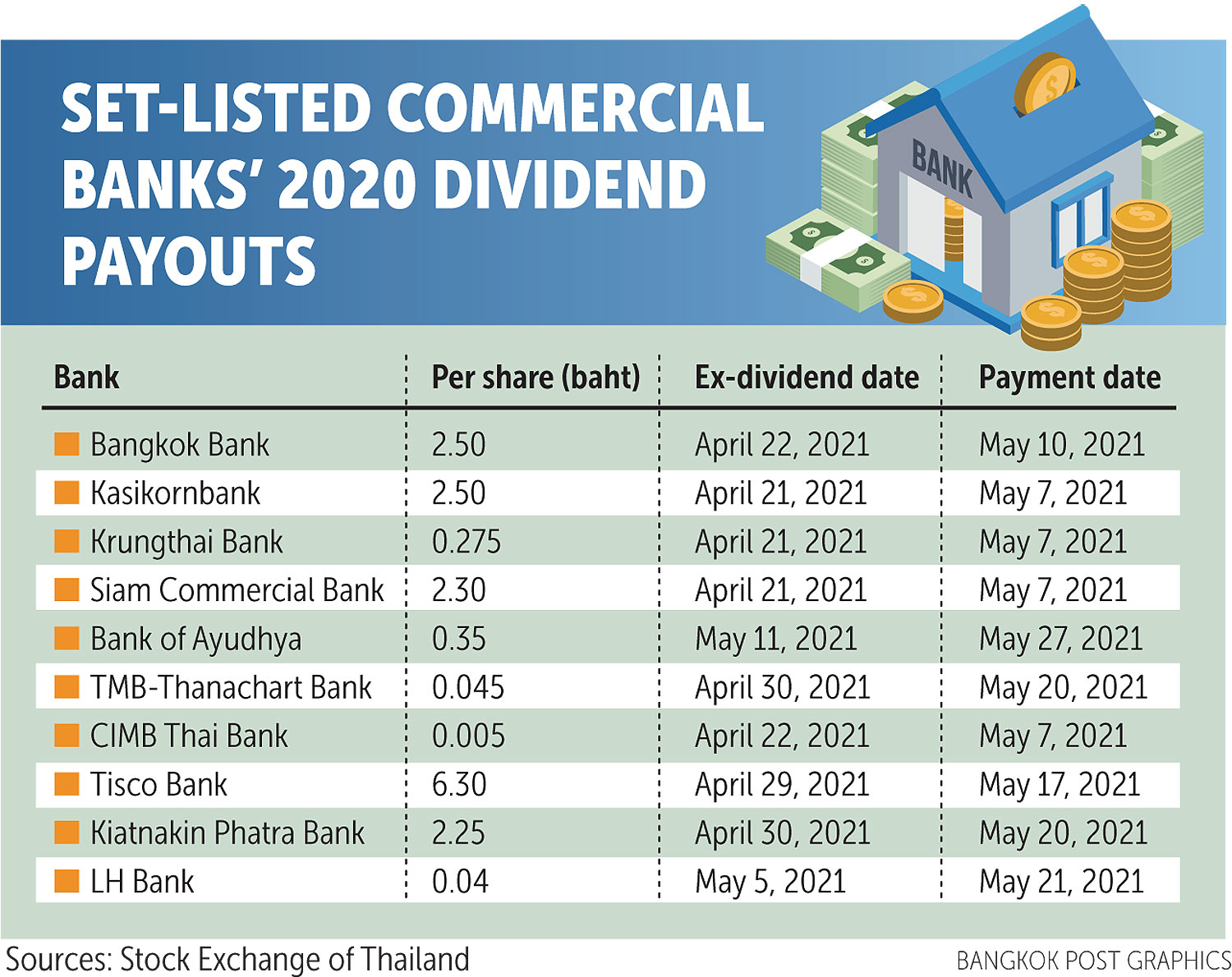 Tisco Financial Group, the holding company that operates Tisco Bank, is reportedly paying a dividend of 6.30 baht per share, which is considered to be the highest among commercial banking industry peers in Thailand.

Bangkok Bank and Kasikornbank have reportedly announced a dividend payment of 2.50 baht a share.

Siam Commercial Bank (SCB), the country's fourth largest commercial lender by total assets, has announced dividend payments for 2020 at 2.30 baht per share, while Kiatnakin Phatra Bank has decided to pay a dividend of 2.25 baht per share.

In June 2020, the central bank required commercial banks to temporarily freeze interim dividend payments to shareholders and suspend stock buybacks to preserve capital in an economy devastated by the pandemic.

The central bank loosened the preventive measures in November by allowing commercial banks to pay dividends for 2020 but not exceeding the previous year's payout ratio and 50% of 2020's net profit.

The central bank announced the commercial banking industry recorded an aggregate net profit of 146.2 billion baht in 2020, a decline from 270.9 billion recorded a year earlier.

This was attributed to the high level of provisioning expenses to cushion against the potential impact of Covid-19 on loan quality going forward, combined with a high base effect from the recognition of extraordinary items from gains on sales of investments in 2019.

Despite lower net profit and other financial data of the Thai banking system, local commercial banks maintained a solid capital base in 2020 with capital funds of 2.99 trillion baht, equivalent to the capital adequacy ratio of 20.1%.

Loan loss provision remained high at 799.1 billion baht, with a coverage ratio of non-performing loans at 149.2% and 179.6% for the liquidity coverage ratio.

With no more than 50% of the dividend payout ratio, commercial banks can strengthen their capital buffers with the remaining amount allotted in preparation for an unexpected situation arising from the pandemic, said Ms Suwannee.

Arthid Nanthawithaya, chief executive of SCB, said given the bank's solid capital base, SCB would be able to provide a dividend payment that aligns with its 2021 earnings, including an interim dividend payment, but this depends on the central bank's dividend payment policy for this year.