Tesla Inc. delivered a record number of vehicles in the first quarter in the face of growing electric-car competition and supply-chain challenges that have hit the global auto industry. 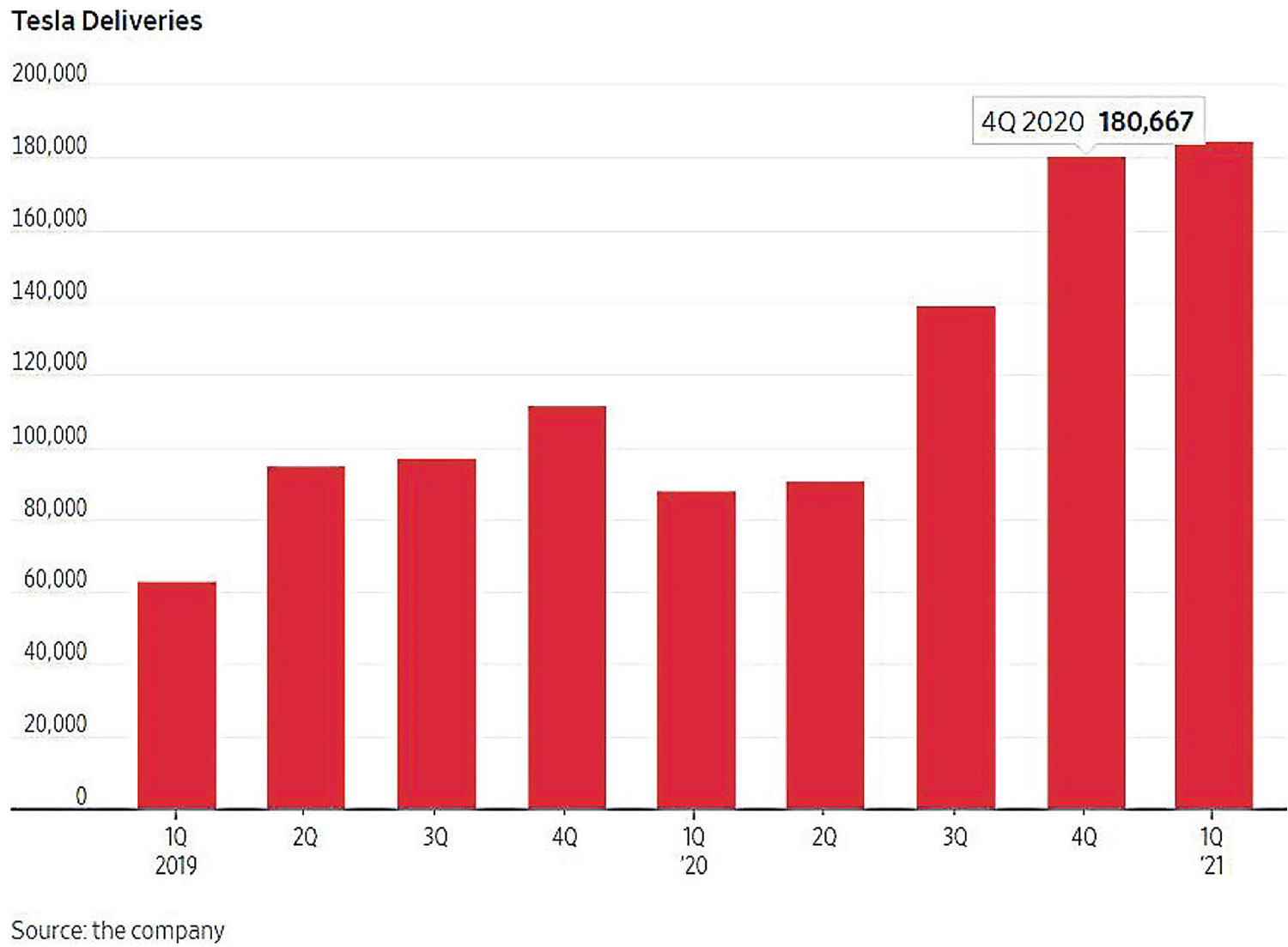 The Silicon Valley auto maker’s roughly 184,800 global deliveries in the first three months of the year eclipsed the high set in the previous quarter and more than doubled from the same period a year earlier, when it idled its lone U.S. car plant in the face of the coronavirus pandemic.

Deliveries, which cruised past analysts’ expectations, were up about 2% from the year-end quarter.

The electric-car maker handed over nearly 500,000 vehicles to customers globally last year — first full year in the black — and expects deliveries to advance more than 50% in 2021, though it hasn’t set a specific target.

Stiffer competition from the likes of Ford Motor Co. and Volkswagen AG, whose all-electric vehicles are making inroads in key markets, is increasing pressure on Tesla to accelerate production growth and bring new models to market.

Analysts surveyed by FactSet on average expected Tesla to hand over about 168,000 vehicles to customers in the first three months of the year, which typically are the company’s weakest for deliveries.

That forecast fell in recent weeks as auto makers contended with a global shortage of semiconductors that forced many companies to scale back output.

Ford, for example, said on March 31 that it was scheduling more downtime for some of its plants because of tight chip supplies.

Tesla in February temporarily shut down its Fremont, Calif., factory because of parts shortages.

The company also had warned of lower first-quarter output of the Model S luxury sedan and Model X sport-utility vehicle as it introduces updated versions.

Deliveries of Tesla Model S and Model X vehicles in the first quarter totaled around 2,020. The company handed over about 182,780 Model 3 sedans and Model Y compact sport-utility vehicles combined.

The company also said it produced 180,338 vehicles in the quarter, all of them Model 3s or Model Ys.

Tesla said the new Model S and Model X have been “exceptionally well received,” adding that it is in the early stages of boosting production after installing and testing new equipment.

The strong delivery numbers are poised to underpin what Wall Streets expects to be robust first-quarter earnings for Tesla, due in a few weeks.

Sales are expected to top $10 billion, helping generate around $470 million in profit, according to a FactSet survey of analysts before the latest delivery figures were posted.

Tesla is aiming to open two new vehicle factories this year, one near Austin, Texas, and the other outside of Berlin. That plant will be the company’s first in Europe, the world’s largest electric-vehicle market as of last year, and is seen as key to improving Tesla’s fortunes in the region.

Tesla registrations in Western Europe slipped roughly 11% last year compared with 2019, as auto makers such as Volkswagen and Renault SA gained traction in the all-electric vehicle market, according to Schmidt Automotive Research.

He said the factory would help Tesla reduce costs and provide a steadier supply of vehicles to the region.

China Increasingly Obscures True State of Its Economy to Outsiders