Songkran without the splash
Business

Songkran without the splash

As the nation gears up to celebrate a muted New Year, state authorities share their views on consumer spend over the holiday period

The atmosphere on Khao San road in Bangkok this year ahead of Songkran. (Photo by  Pornprom Satrabhaya)

Next Tuesday promises to be a different Songkran Festival with laughs and smiles from visiting family and friends rather than water splashing, tourists, and shopping during the scorching heat.

Many people have no plans to spend extra during the holidays, with some even considering cutting their holiday budget. While a number will keep up the Songkran spirit and travel domestically, 26.5% out of 1,000 people interviewed by the University of the Thai Chamber of Commerce (UTCC) said they planned to stay home.

The UTCC expects Songkran to be less enthusiastic, but business leaders and state tourism authorities have said holding the festival with health guidelines in place to prevent the spread of Covid-19 is better than nothing. 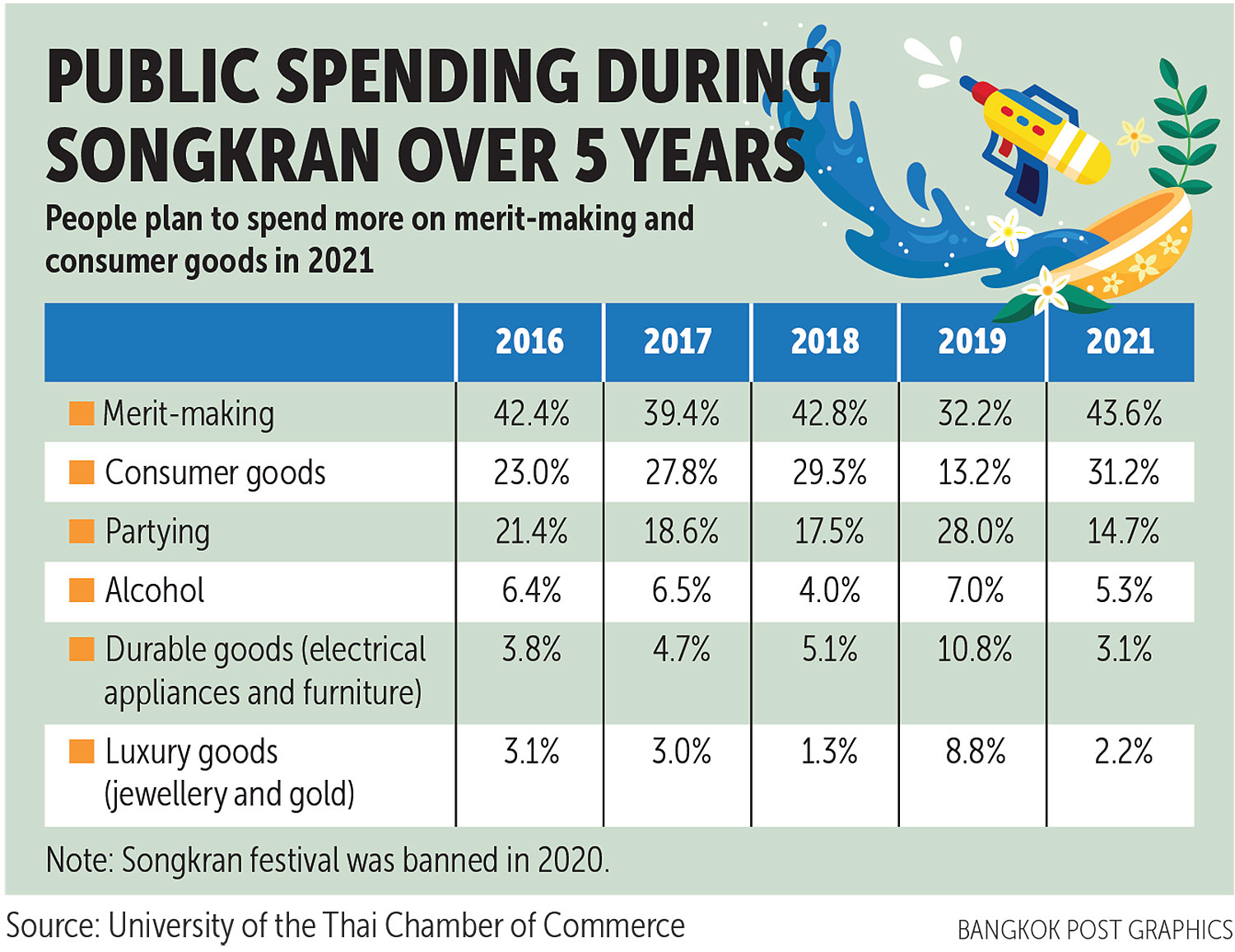 However, FTI vice-chairman Kriengkrai Thiennukul admitted that a ban on water-splashing activities -- the highlight of the festival -- will affect its joyous atmosphere.

Bangkok authorities decided to prohibit celebrations, including water splashing, concerts and foam parties, in one of the popular destinations for Songkran revellers.

The move aims to contain the spread of coronavirus, but could mean less of a party mood for the New Year celebrations.

"We still have a positive outlook. More money will circulate during the festival because people have more time off than in previous years," said Mr Kriengkrai.

The cabinet late last year resolved to add one extra holiday on April 12 to the three-day festival, which usually starts on April 13. When combined with the preceding Saturday and Sunday, the vacation period is six days.

"Long holidays and economic stimulus packages are a good way to encourage people to spend," he said.

The government previously launched the "We Travel Together" scheme to stimulate domestic tourism and help related businesses by paying a share of accommodation cost. Under this scheme, travellers had to pay only 60% of the normal room rate, with the government responsible for the rest.

The scheme is scheduled to end on April 30.

Another scheme is "Section 33 We Love Each Other", which gives eligible recipients a 4,000-baht subsidy via a mobile app.

Participants can spend the money buying goods and services at stores registered in the programme, or pay for tickets for the skytrain or subway until May 31.

Spending under this scheme reached 750 million baht as of March 26, according to deputy government spokeswoman Rachada Dhnadirek. 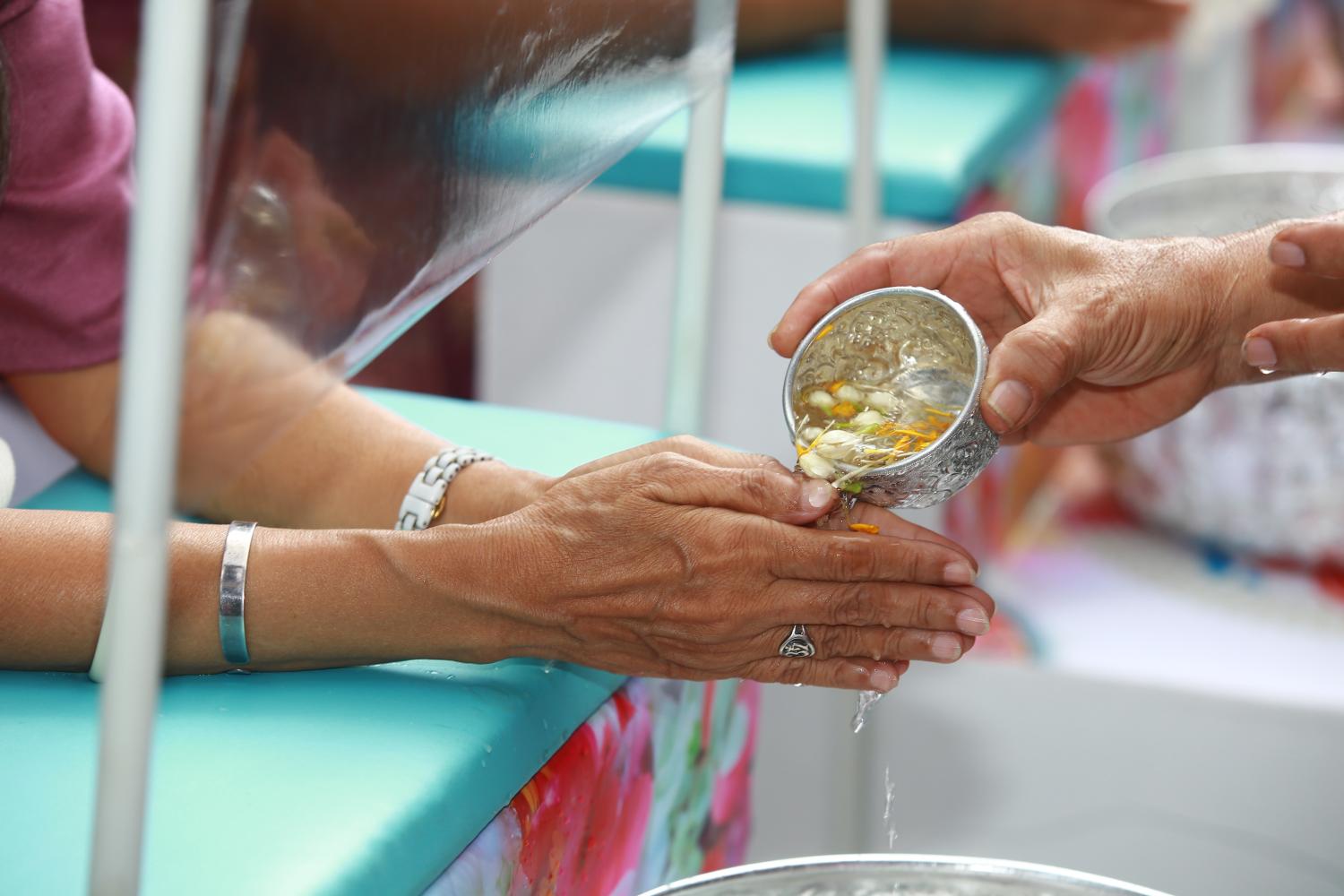 The water festival or Songkran begins on April 13 and marks the Thai New Year. Songkran is Thailand's most famous festival. Somchai Poomlard

Somchai Pornrattanacharoen, president of the Thai Wholesale and Retail Trade Association, said consumer spending during Songkran is expected to be only slightly better than last year when the country was in a nationwide lockdown.

Consumer confidence has improved because some people are vaccinated and Covid-19 cases are declining since the second wave began, while various economic stimulus packages have spurred shopping demand, particularly daily necessities in the early months of this year, he said.

"I am not sure if demand for groceries will be sustained because many people stocked necessary products before the stimulus package benefits ended last month," Mr Somchai said.

The second phase of the co-payment subsidy scheme, in which the government pays for 50% of food, drink and general goods purchases of up to 150 baht per person per day, capped at 3,500 baht per person, also ended on March 31.

As Songkran is an occasion for family reunion, people from rural areas who work in cities usually return home to celebrate. This is an opportunity for restaurants to experience a surge in business at tourist destinations, he said. 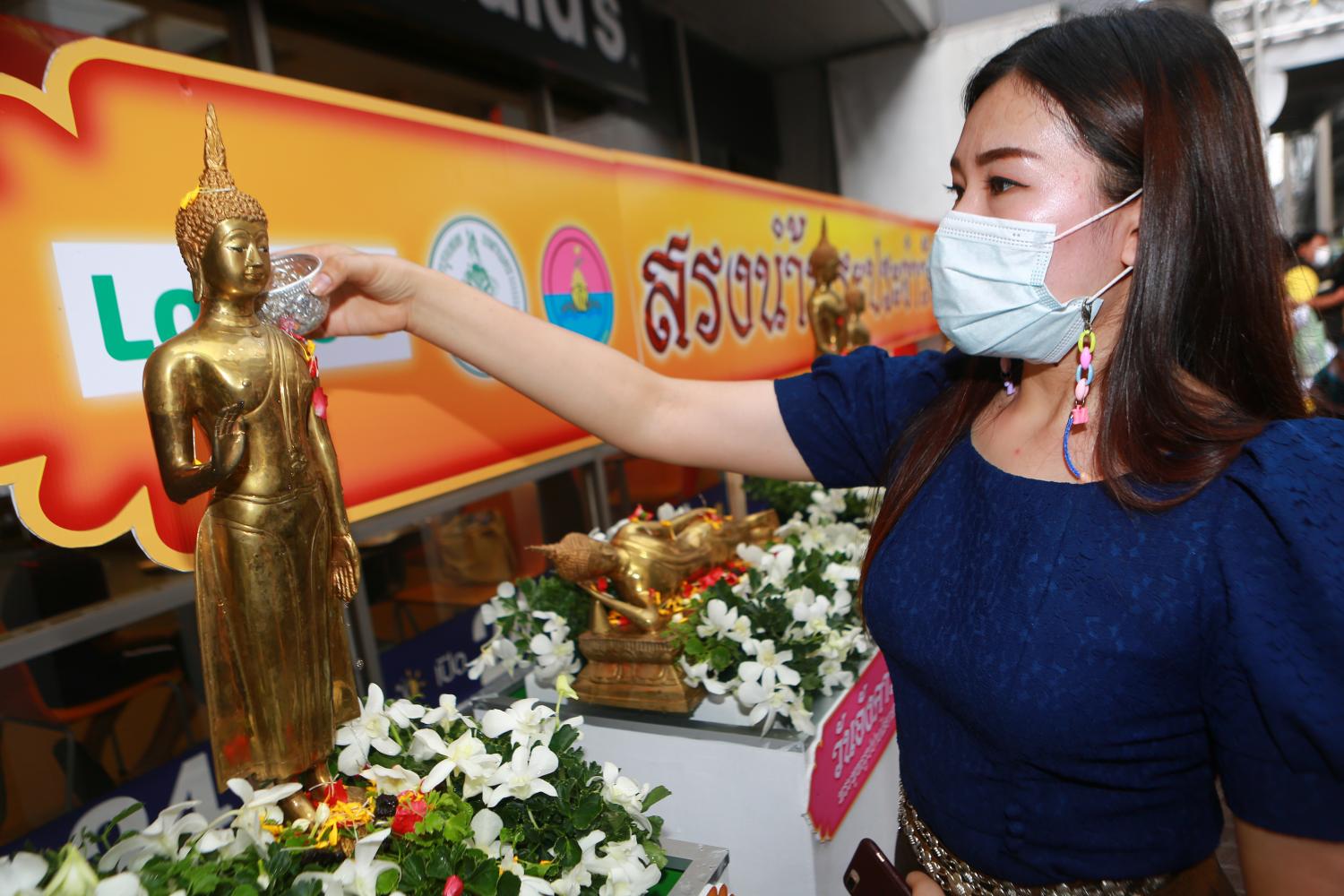 A woman pours water over a Buddha statue as is tradition during Songkran. Somchai Poomlard

More Thais are likely to travel this Songkran holiday than last year, with the festival creating a mood similar to the Chinese New Year and Makha Bucha holidays in February, said the Tourism Authority of Thailand (TAT).

TAT governor Yuthasak Supasorn said Songkran is a time when people travel to tourist destinations across the country, with the government's stimulus measures such as We Travel Together for hotels and lodging as well as Rao Chana cash handouts supporting locals taking more trips.

During Songkran, tourists are expected to flock to the northeastern and southern parts of the country, he said.

Mr Yuthasak said Songkran celebrations in eight provinces will highlight traditional aspects and comply with guidelines from the Centre for Covid-19 Situation Administration as well as the Public Health Ministry to ensure safety. 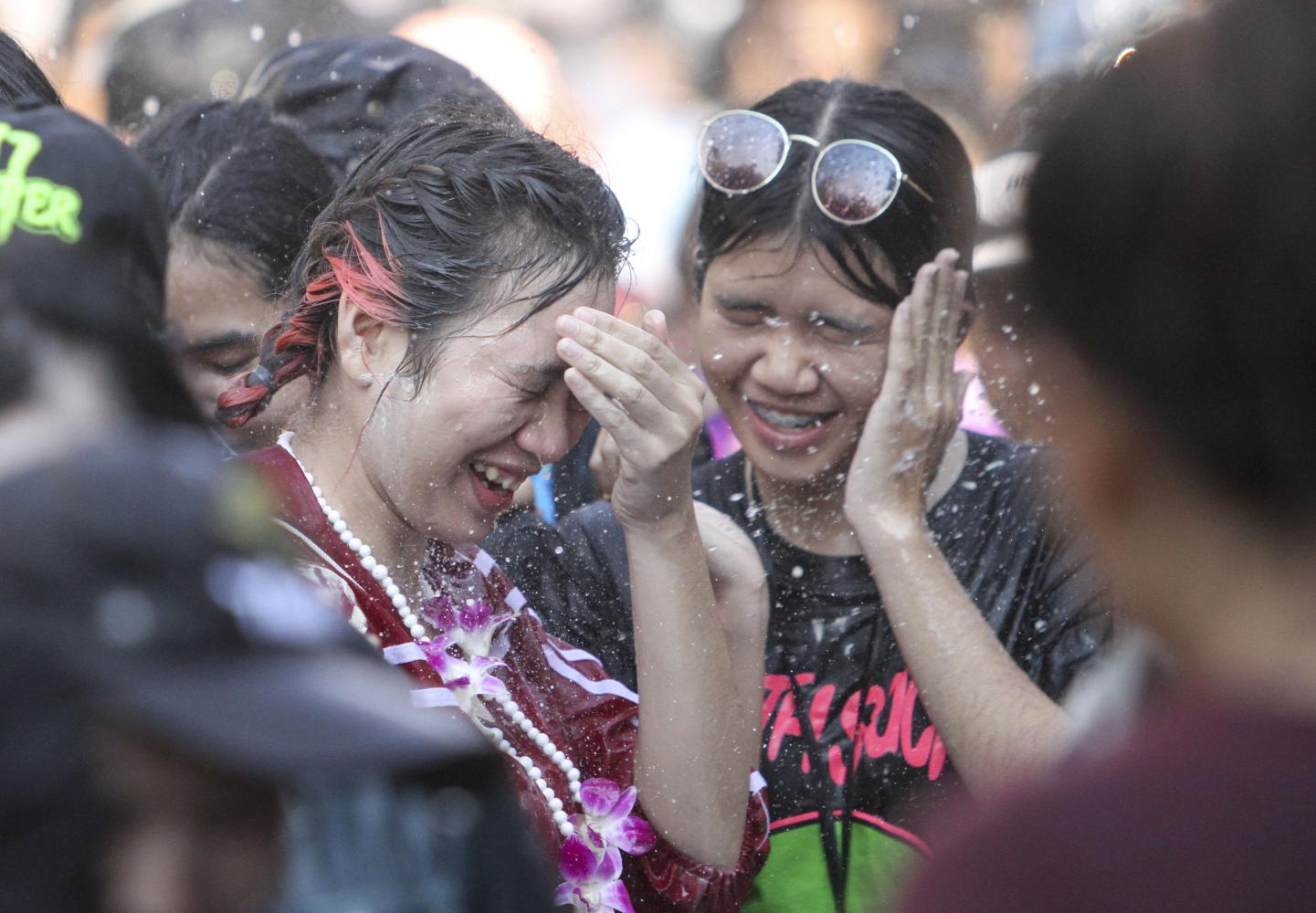 The water festival or Songkran begins on April 13 and marks the Thai New Year. Songkran is Thailand's most famous festival. Pattarapong Chatpattarasill

The UTCC sees it differently, arguing the special occasion will fail to stimulate big spending because of the prolonged impact of Covid-19.

With daily reports of infections circulating since the outbreak in Samut Sakhon in mid-December last year, people are still in fear of the virus and worried over economic uncertainty affecting their income.

"They are afraid of spending and are choosing to save," said UTCC president Thanavath Phonvichai.

Even economic stimulus measures, including the "We Win" (Rao Chana) scheme, have not changed people's lacklustre mood.

Approved in January, the We Win scheme aims to provide 210 billion baht in financial handouts to 31 million people.

However, with continuing health and economic problems, April may not be the right time for tourism and shopping, said Mr Thanavath.

"We have not seen signs of economic recovery," he said.

"The economy may likely grow less than 3% this year."

The UTCC expects people's spending during Songkran will dive by 17% from 2019 to 113 billion baht, the lowest in nine years.

The university based its prediction on its survey of 1,256 people across the country between March 22-29.

Mr Thanavath believes the speedy distribution of Covid-19 vaccines and the arrival of foreign tourists will be the real cure for financial ills.

The state's plan to allow vaccinated foreign tourists to visit Phuket from July 1 without being quarantined has also raised hopes regarding a recovery of the tourism sector.

Foreign tourism is likely to remain a key driver for economic restoration, he said.

"The government has made injections worth 300-350 billion baht, but these cannot compare with foreign tourism revenue valued at 200 billion baht a month," said Mr Thanavath. 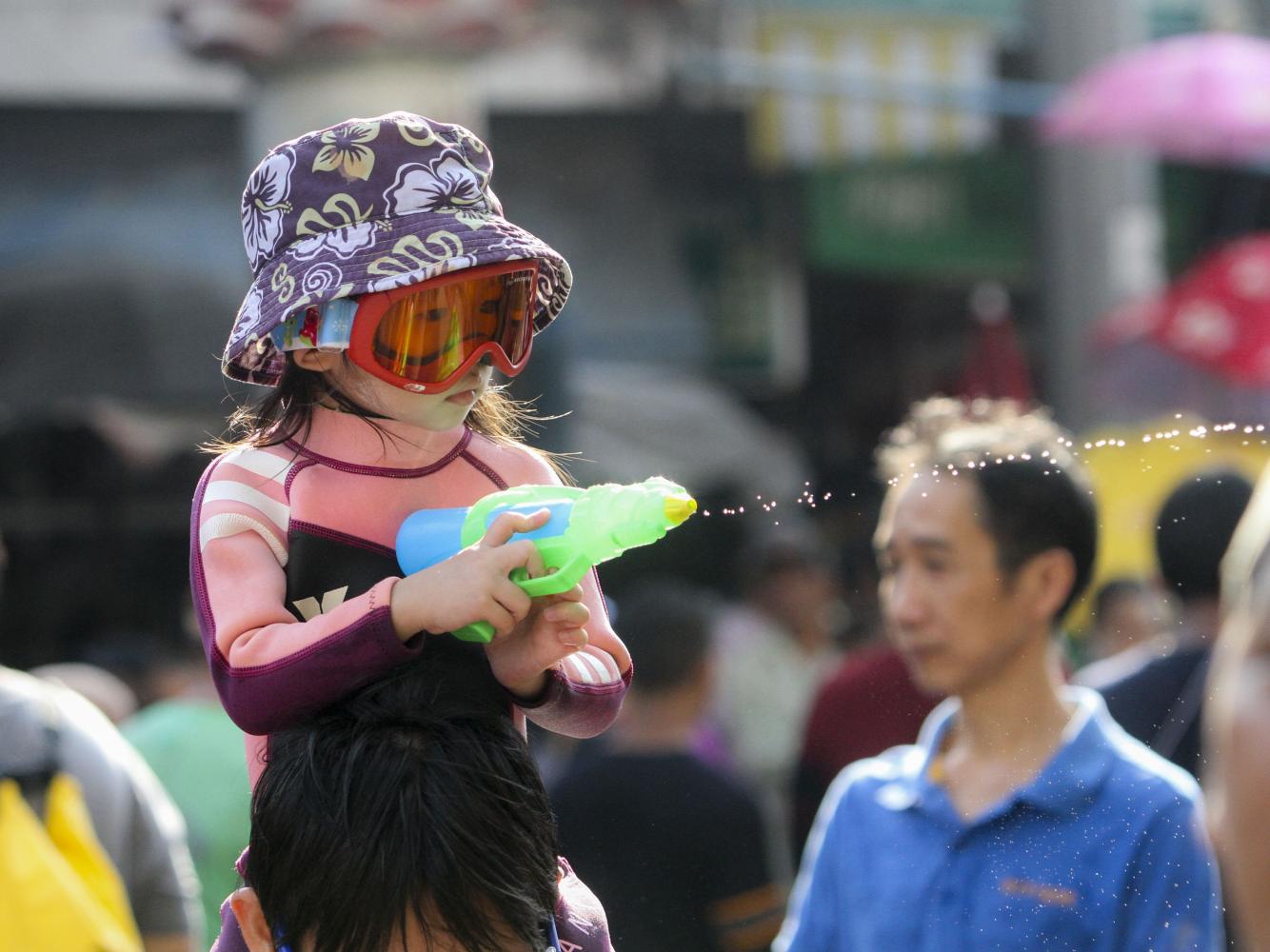 Locals at a foam party during Songkran 2017 in Bangkok at CentralWorld. Wisit Thamngern