A security guard outside a bar located in Covid-19 stricken Thong Lor. (Photo by Somchai Poomlard)

A fresh round of Covid-19 infections in Bangkok has sparked fears of a prolonged lockdown, causing the SET Index to plunge 1.46% or by 23.10 points, closing at 1,556.56 points in trade worth 108 billion baht on Wednesday, propelling investors towards safe-haven assets like gold.

However, Asia Plus Securities executive vice-president Therdsak Taveeteeratham said the government would not announce a curfew. The brokerage expects authorities to control the situation.

Mongkol Puangpetra, executive vice-president of KTBST Securities (Thailand), said despite the surge of infections in Bangkok, the city's governor has already issued several measures to control the zones with high infections.

Mr Mongkol believes the measures should be adequate to prevent a new outbreak. However, if the outbreak grows out of control, there is a chance the government will impose a curfew, he said.

"I think the current measures to curb the outbreak are enough without declaring a curfew. The outbreak in Samut Sakhon was also quite severe, but the government was able to manage it. Moreover, providing vaccines to people in high-risk areas will also help decelerate the spread," said Mr Mongkol. 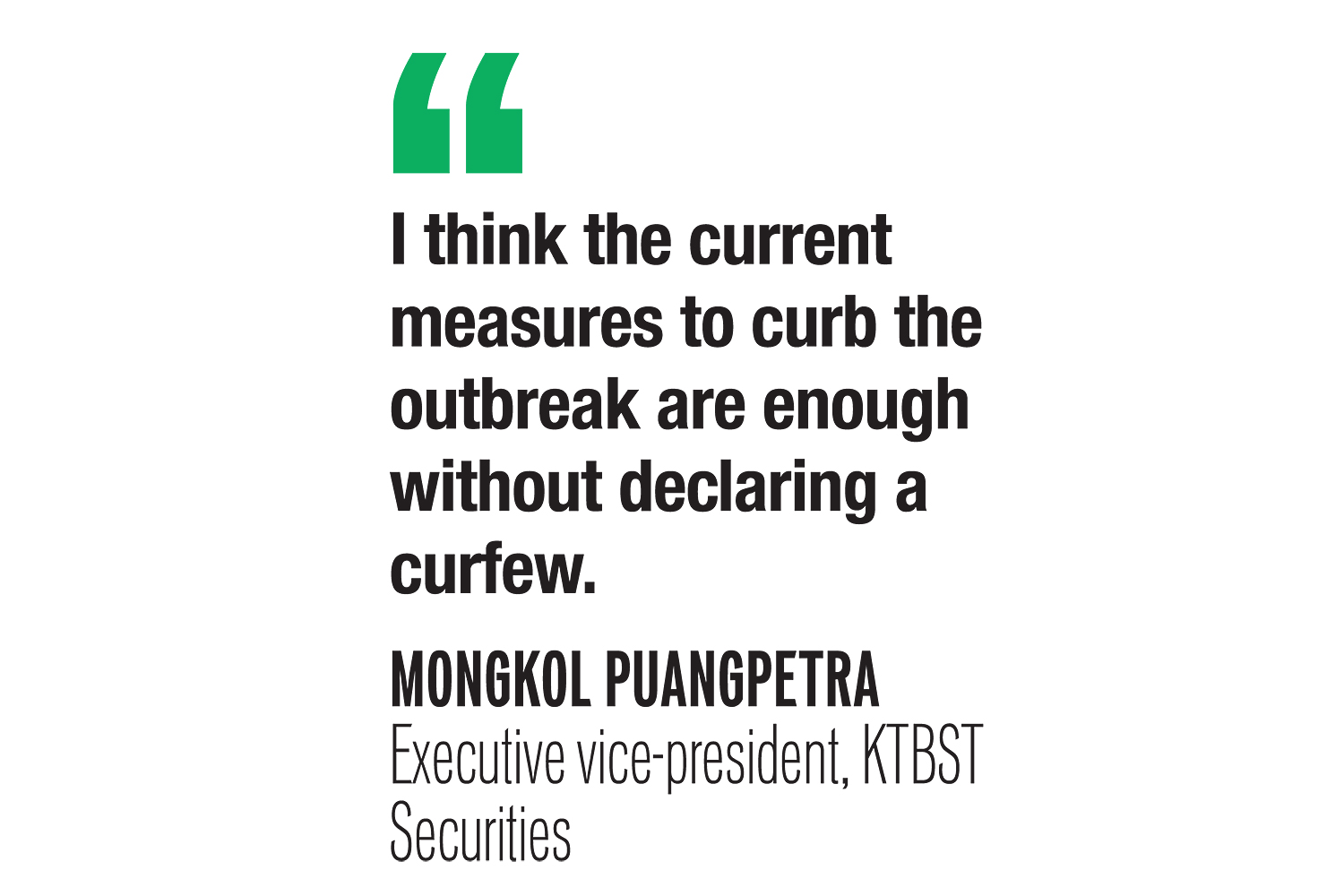 During each round of outbreaks, the stock prices of Sri Trang Gloves (Thailand) (STGT), Thailand's largest rubber glove producer, and its parent company Sri Trang Agro (STA) always rally. Stock prices of tourism-related companies such as airlines and hotels plunge.

"The stock market falls for a short duration immediately after news of an outbreak is published," he said.

"However, when the government announces clear control measures, the market will bounce back."

Mr Therdsak said the government would not announce a curfew as the situation is not yet severe. Instead, he expects the government to force closures in some areas where infections have been found.

Trinity Securities' research stated STGT and STA will benefit from the new surge in infections as both stocks have several positive factors supporting their prices.

They are expected to report strong performances in the first quarter this year and will be added to the SET50 Index in the next round of selection, said the research.

Trinity projects STGT and STA's dividend payments will rise to 4.8% and 3.7% respectively, with both stocks to be marked with an XD (excluding dividend) on April 12, 2021.

Meanwhile, global gold prices reached an intra-week high on Monday thanks to an upgrade of the 2021 global GDP forecast to 6%, up from 5.5%, while the 2022 outlook is 4.4% growth, up from 4.2%. Both figures were revised following the weakening of the dollar and a decline in the 10-year US government bond yield curve.

Furthermore, the local gold bullion purchase and sale prices announced by the Gold Traders Association rose slightly to 25,650 and 25,750 baht, respectively, from 25,600 and 25,700 baht on Monday.

The market cap for cryptocurrencies surpassed $2 trillion for the first time on Monday, spurred by demand from retail investors and corporates for the new asset to hedge against inflation.

Ethereum, the world's second largest cryptocurrency, hit a new record at $2,140 on Monday, followed by a correction. Bitcoin climbed to about $58,000, but failed to surpass the $60,000 mark and break its previous record of $61,200 last month.

The Securities and Exchange Commission (SEC) approved Bitkub, the largest local digital exchange, resuming its application process for new customers from 9am. The SEC found the exchange made several changes to its system in compliance with its orders.