CEO pay surged in 2020, a year of historic business upheaval, a wrenching labor market for many workers and unprecedented challenges for many leaders.

Median pay for the chief executives of more than 300 of the biggest U.S. public companies reached $13.7 million last year, up from $12.8 million for the same companies a year earlier and on track for a record, according to a Wall Street Journal analysis.

Pay kept climbing in 2020 as some companies moved performance targets or modified pay structures in response to the Covid-19 pandemic and accompanying economic pain. Salary cuts CEOs took at the depths of the crisis had little effect. The stock market's rebound boosted what top executives took home because much of their compensation comes in the form of equity.

In some cases, investors have responded by withholding support for company pay practices in annual advisory votes, increasing pressure on corporate boards. With the annual-meeting season only just beginning -- 80% of the S&P 500 have yet to hold their votes, according to pay data firm Equilar -- shareholders have given a thumbs down to pay arrangements at a dozen big companies, including Starbucks Corp. and Walgreens Boots Alliance Inc.

"I don't think we've ever seen anything like this before in terms of the number of changes we've seen in incentive plans" during the pandemic, said Shaun Bisman, a pay and corporate-governance consultant at Compensation Advisory Partners in New York.

Pay rose for 206 of the 322 CEOs in the Journal's analysis, which uses data for S&P 500 companies from research firm MyLogIQ. The median raise was nearly 15%.

The Journal uses figures reported by companies in their regulatory filings, which value equity awards on the date granted.

The leaders of Exxon Mobil Corp., ad giant Omnicom Group Inc. and Intel Corp. made less in 2020 than they did in 2019. Those companies generated total shareholder returns, a measure of share-price changes and dividends, between -36% and -15% in 2020.

Compensation jumped for some executives at battered companies.

At Norwegian Cruise Line Holdings Ltd. -- which recorded a $4 billion loss last year after sailings stopped and revenue fell 80% -- CEO Frank Del Rio's pay doubled to $36.4 million, in part with bonuses tied to a three-year contract extension, according to the company's proxy.

A Norwegian Cruise spokesman said Mr. Del Rio's pay included amounts related to the effects of the pandemic, a U.S. government decision to halt travel to Cuba and an employment-agreement extension.

"We believe these changes were in the best interests of the company and secured Mr. Del Rio's continued invaluable expertise," the spokesman said. "Our management team took quick, decisive action to reduce costs, conserve cash, raise capital and is executing a plan to relaunch its ships.''

As the pandemic unfolded and whole industries slowed or nearly froze, many CEOs gave up some or all of their salaries, often to great fanfare. But salary makes up less than 10% of total compensation for most big-company CEOs. 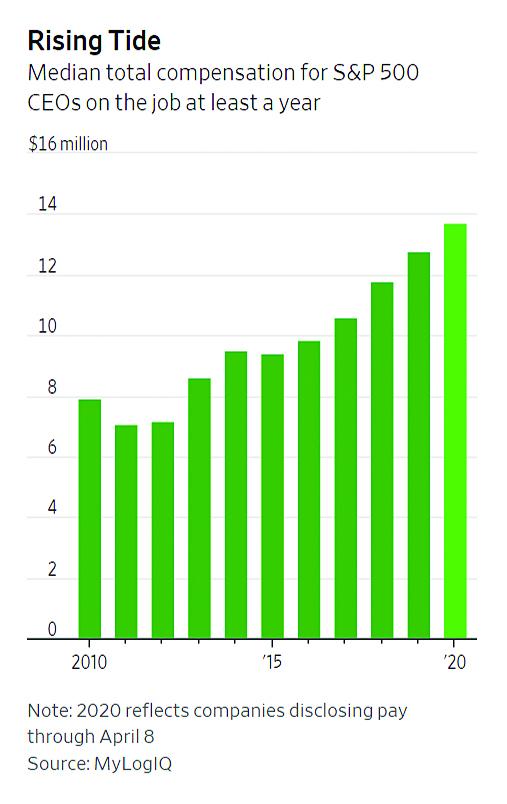 The equity awards and cash bonuses that make up the bulk of the rest have generally remained high, the Journal analysis shows.

The biggest pay packages reported so far went to leaders who received special stock awards during the crisis.

At Aramark, the institutional catering and uniform provider, the board bumped executives' annual incentive payments up to 40% of initial targets instead of the 10% that pay-program formulas would have dictated.

Aramark also made a special one-time options grant and adjusted performance targets for a three-year award established in 2018.

For CEO John Zillmer, 2020 pay totaled $27.1 million, instead of closer to $11 million without the changes.

In its proxy statement, Aramark said some changes were meant to retain executives and other employees receiving stock compensation, and to recognize the "extraordinary circumstances" of the pandemic.

The company said the executives aren't expected to receive annual equity awards in 2021, and the additional options will only provide value if the company's share price rises.

Most companies didn't modify annual or long-term incentive plans, but those hard-hit by the pandemic were more likely to, consulting firm Pay Governance found in an analysis of S&P 1500 companies filing early proxy statements.

When boards intervened to adjust calculated payouts, they were more likely to increase them than lower them, Pay Governance found.

He said investors are displeased with boards issuing retention awards and some Covid-19-related changes to executive pay plans.

TransDigm allowed vesting for option awards made during the fiscal year even though the performance criteria wouldn't be met, benefiting 85 employees, including directors and some top executives.

In its proxy, TransDigm said directors concluded existing performance criteria weren't attainable, cited good performance ahead of the pandemic, and said not making the change would have put some employees at a disadvantage, because the company awards equity every other year.

TransDigm executives also gave up pay, including CEO Kevin Stein who turned down $1.08 million in cash bonus and about $117,000 in salary.

"TransDigm's executive compensation plans, along with the board's decision to vest certain options in 2020, are designed to incentivize leaders to act like business owners and align their interests with shareholders over the long term," said Jaimie Stemen, the company's head of investor relations.

About 1 in 6 companies holding shareholder votes since Sept. 1 have gotten less than 70% support for say-on-pay votes, according to an analysis of S&P 500 companies by Equilar. Among the same companies last year, by contrast, about 1 in 12 had such stiff opposition.

Although only advisory, a poor showing in a say-on-pay vote often prompts boards to restructure pay packages -- or more. About a quarter of boards replace the compensation-committee chairman and nearly half replace at least one committee member after losing a vote, consulting firm Willis Towers Watson found.

Getting 70% to 80% shareholder support for a pay package is worrisome for boards, said Don Delves, executive-pay-practice leader for Willis Towers Watson. "Below 70% they consider almost like a failure."