Migrants protesting against the military junta in Myanmar hold a picture of leader Aung San Suu Kyi, during a candlelight vigil at a Buddhist temple in Bangkok. (Photo: Reuters)

The Myanmar junta's brutal military repression against anti-coup demonstrators and airstrikes against innocent villages near the Thai border between March 27 and 30 has prompted acute rebukes and trade sanction threats from the international community.

Concerns of civil war risks loom as pro-democracy protesters and ethnic armed groups vow to fight back, putting Myanmar on the verge of an economic collapse after enjoying economic growth of between 5.9% to 7.3% from 2015 and 2019.

The World Bank late last month slashed Myanmar's economic outlook this year to a contraction of 10%, a sharp reversal from the bank's previous economic update in October of 5.9% growth in 2021, one of the strongest rates of expansion in the region.

Earlier in February, a report by Fitch Solutions warned the political instability in Myanmar could make a "significant impact" on Myanmar's economy, particularly if foreign direct investment (FDI) is delayed or cancelled due to sanctions from the West.

Thailand and Asean as a whole could be affected if the repression in Myanmar continues unabated.

The situation has caused Thai businesses to plead for state financial assistance and prompted the 10-nation Asean bloc to do something unknown in its existence -- take a stand on a member country's internal affairs.

Economic expansion in Asean is expected to dip by 0.5% on average this year, with the political unrest in Myanmar believed to decrease the GDP growth forecast in that country to 0-1% from 6%, said Aat Pisanwanich, director of the Center for International Trade Studies at the University of the Thai Chamber of Commerce. 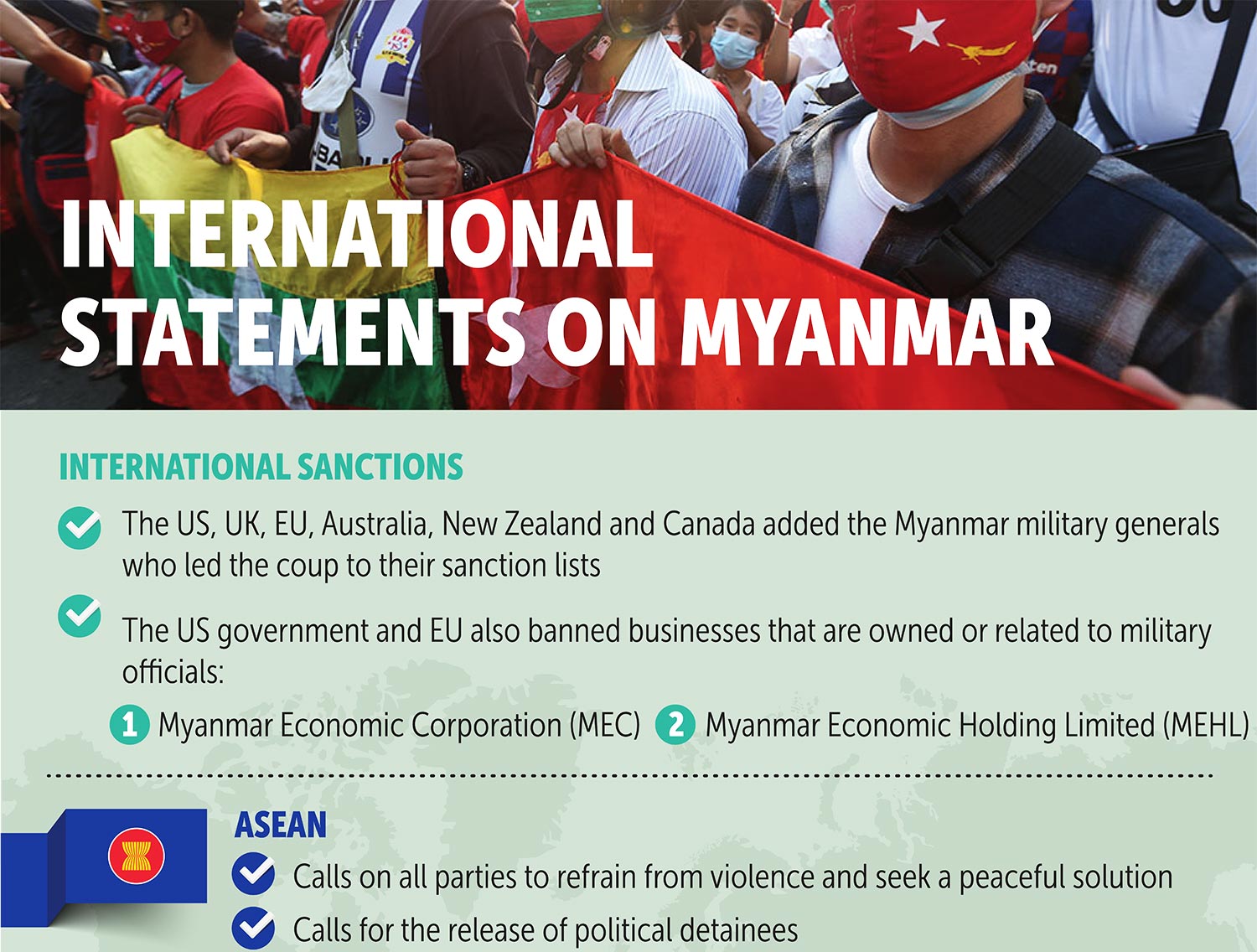 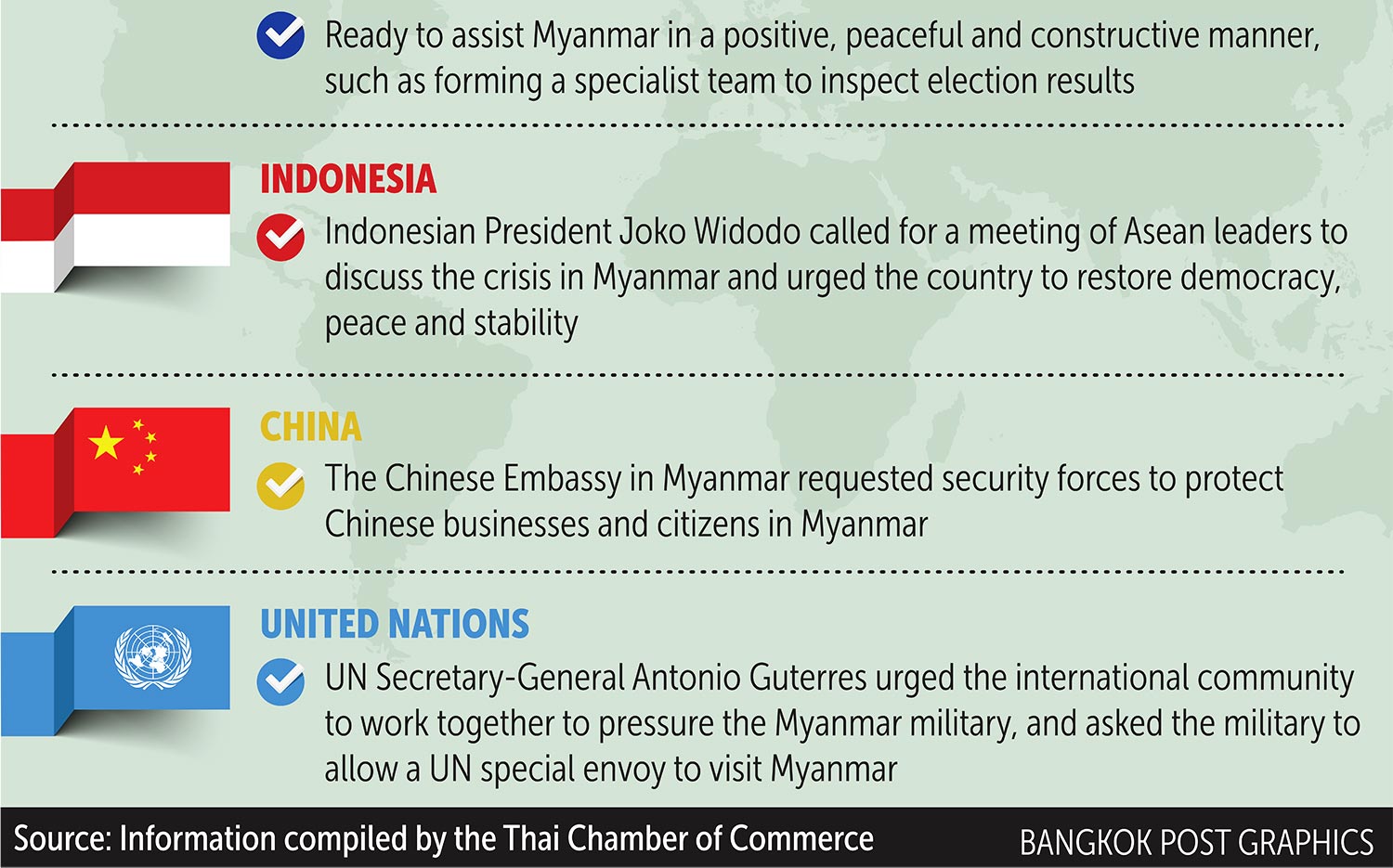 This political uncertainty will certainly affect the investment atmosphere in Asean as foreign companies may lose confidence in their business security in the region, he said.

An arson attack on a Chinese factory in Myanmar during a confrontation between the military regime and protestors displayed the difference between Asean and the European Union.

Asean failed to enforce its rule protecting foreign investors' assets in a member country, and as a result, Beijing may send troops to protect Chinese assets in Myanmar if the political conflict escalates, said Mr Aat.

This will eventually affect trade and investment in Asean, he said.

Singapore is the largest investor in Myanmar, followed by China and Thailand, but their investment will be subject to changes in the future, he said.

Foreign investors may switch to Vietnam or Cambodia, while Thai businesses need to look for alternative markets because nobody knows how long the standoff in Myanmar will last, said Mr Aat.

"Thai businesses in Myanmar have abruptly stopped their operations and brought Thai staff back to Thailand because they believe the conflict will be prolonged," he said.

"Myanmar lost a golden opportunity to be an investment destination."

Kich Aungvitulsatit, chairman of Thai-Myanmar Business Council (TMBC), believes the political turbulence will not significantly affect the Asean economy as long as Naypyitaw does not encounter complete economic sanctions from the international community.

He said many countries selectively impose sanctions on individual military figures and businesses related to the regime, while the US said it would consider suspending the Generalized System of Preferences programme for Myanmar, making the country lose tariff-free access to the US market for certain goods.

The ongoing sanctions have not had an effect on political violence in Myanmar because the military regime previously survived past sanctions, hanging on even as GDP contracted by 11% in 1988, said Mr Aat.

"That is why it is hard to predict when the conflict will end because Myanmar seems to turn a deaf ear to international pressure, along with a belief that it has 'close allies' in Russia and China," he said.

"Asean is not strongly united and plays no role in solving political problems, making Myanmar appear isolated even though it is an Asean member."

Thailand-Myanmar trade value has decreased by 50-70% as protests across Myanmar are making it hard to continue business there, said Sanan Angubolkul, chairman of the Thai Chamber of Commerce.

Among the protestors are state officials and employees in the private sector, and their participation in street demonstrations had led to their absence at work.

Some employees in commercial banks refuse to work as part of a civil disobedience movement, and they are joined by officials from some agencies, including the Revenue and Customs departments.

Banks were closed for a spell, leading to a cash shortage for some business operators.

This closure makes it difficult for companies trying to remain open during business hours amid the political protests, said Mr Sanan. 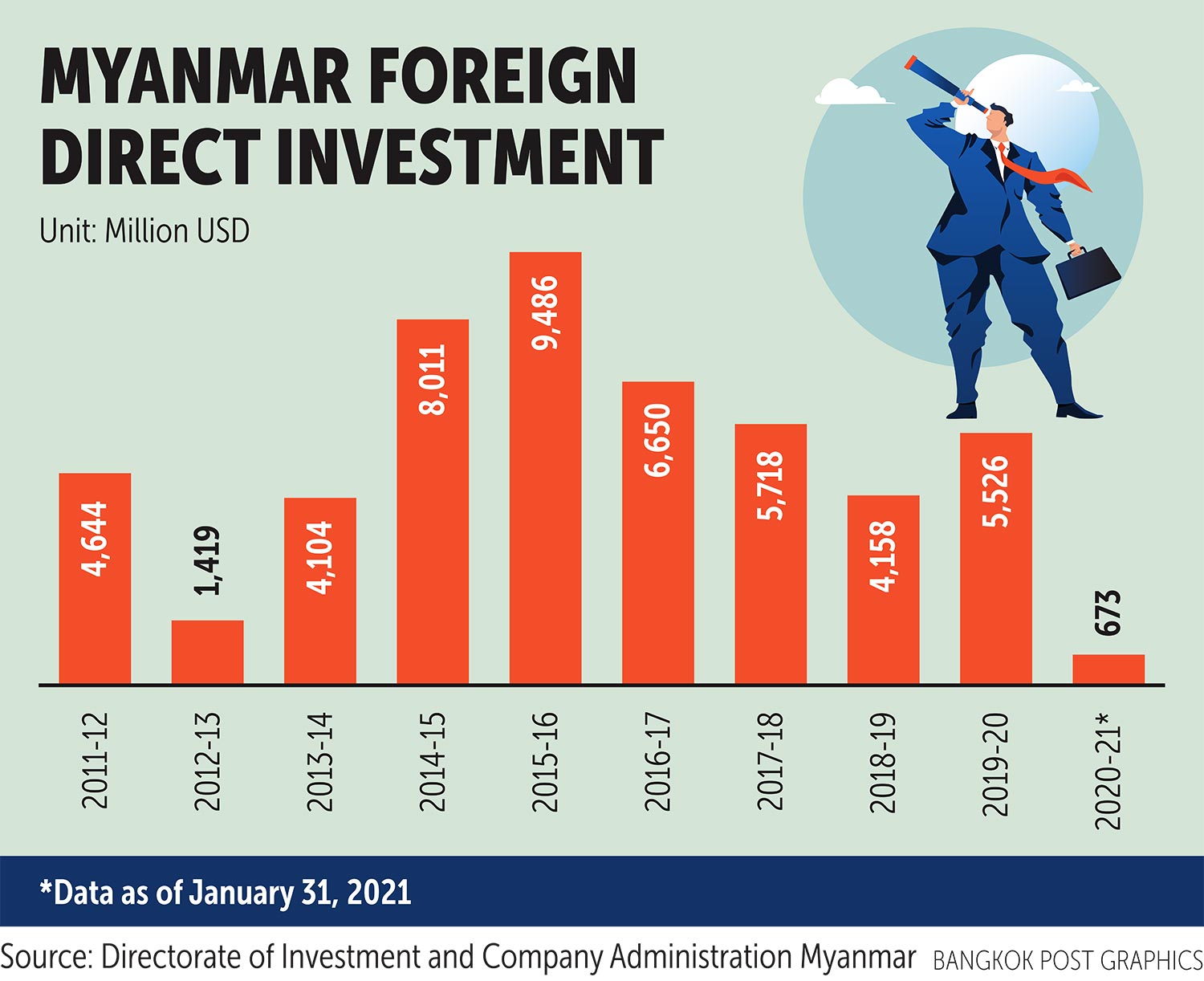 The situation has affected the US dollar-kyat exchange rate, threatening to increase manufacturers' production costs. The weaker kyat is also becoming a new factor crippling the purchasing power of the locals there.

Many Thai entrepreneurs are dealing with a severe liquidity shortage because they had to close their food, spa and massage shops during the political conflict, with some already shuttered for a month, according to Mr Kich of TMBC.

Businesses are increasingly concerned about international sanctions, which are now limited to companies related to the military regime, but could expand to include any entity engaged with Myanmar, said Mr Sanan.

He expects a severe economic impact will be more clearly evident in the third quarter this year.

In the long run, Mr Kich believes FDI in Myanmar will disappear.

Thai investment in Myanmar is worth 7-8 billion baht, spanning from large to small businesses, according to the chamber.

Thai businesses in Myanmar are in desperate need of urgent solutions to help with their sluggish cash flow, eager for any assistance from the Thai government, said Mr Sanan.

"Many businesses are considering reducing work days for their employees or even resorting to dismissal," he said, referring to possible responses to cut fixed costs while businesses remain shut down.

Another problem is Thai entrepreneurs cannot send money back to Thailand and Thai suppliers have not received payment after exporting products to Myanmar. 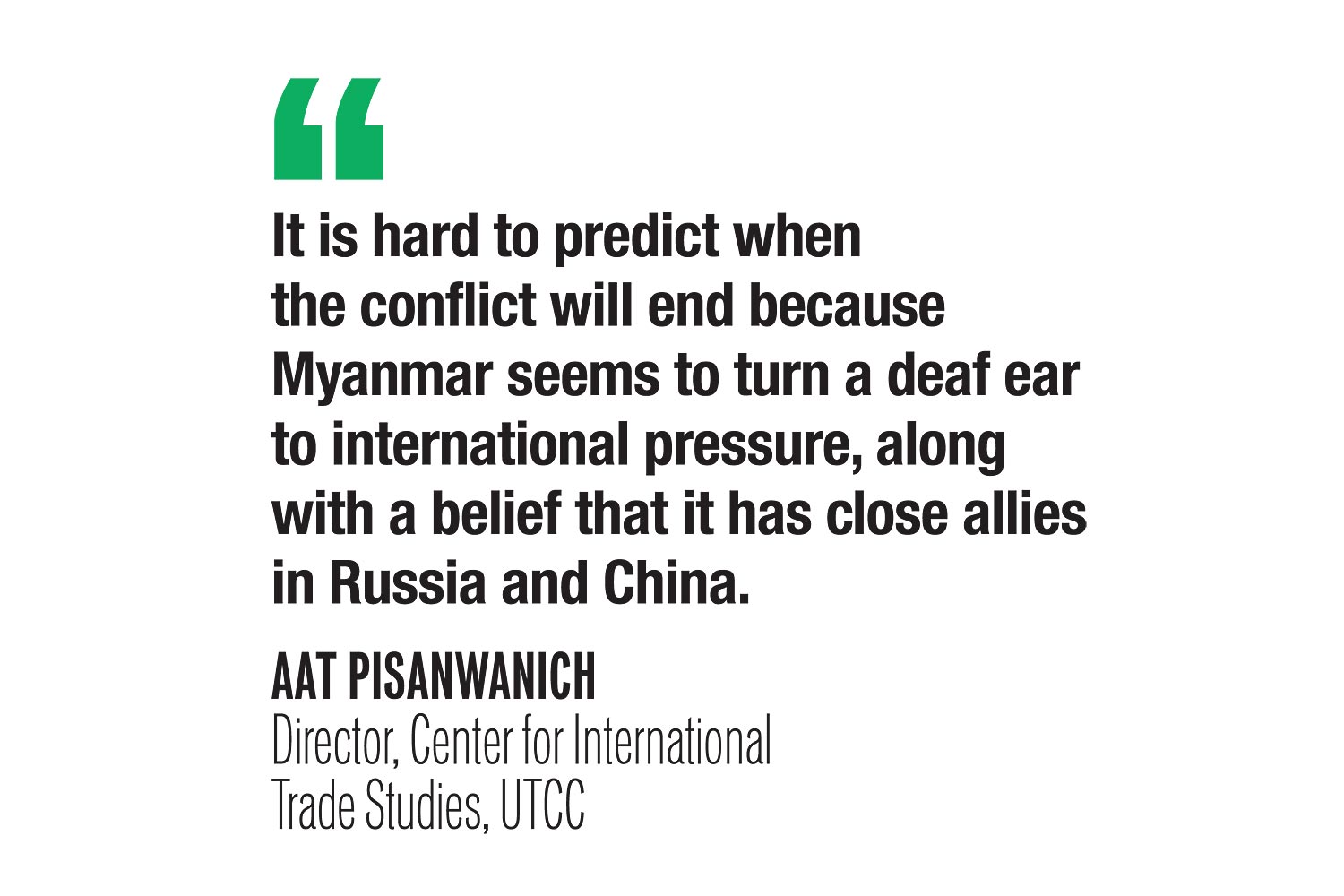 In a recent talk between business representatives and the Thai Commerce Ministry, participants asked the Thai government to consider reducing the corporate income tax as Thai law requires businesses to pay tax on profits generated overseas.

Another proposal was offering low-interest loans for investment in Myanmar.

Rak Vorrakitpokatorn, president of the Export-Import Bank of Thailand, said the bank is looking for measures to help Thai entrepreneurs feeling the pinch from the political chaos in Myanmar.

Affected entrepreneurs comprise both those who have invested in Myanmar and those who conduct business or trade with Myanmar, he said.

The measures are likely to be rolled out soon, said Mr Rak.

A source from the Finance Ministry who requested anonymity said a preliminary survey found Thai entrepreneurs, especially those who do business or trade with Myanmar, face money transfer difficulties as most of the banks in that country are open intermittently, leading many of them to have tight liquidity.

On the investment front, the source said Thai investors in Myanmar have encountered a severe labour shortage because of workers' strikes against the coup, with some companies having their purchase orders revoked.

According to the source, escalating violence in Myanmar was starting to take a toll on Thai exports, with shipments to Myanmar plunging 15.2% year-on-year in the first two months of this year to US$650 million.