Customers wait for service at an AIS shop in Bangkok. (Reuters photo)

Gulf Energy Development has announced it is ready to apply for a short-term loan from 15 local and foreign financial institutions worth 150 billion baht to fund its acquisition of InTouch Holdings.

The so-called "bridge loan" will be made under a lending agreement that financial institutions provide loans to Gulf if the company's debt-to-equity (DE) ratio does not exceed 3.5 times.

However, some industry sources say a full takeover is unlikely with Gulf expected to acquire no more than 30% of total shares, which includes the 18.93% it already owns.

The country's biggest private power producer by market value may also have to issue bonds to fund part of the acquisition, said Smith Banomyong, Gulf's chief of asset management and investments.

Some analysts predict Gulf will later launch perpetual bonds or set up an infrastructure fund and sell some of InTouch's assets to fund the deal, in order to reduce its own high debt ratio if it becomes the majority shareholder.

Mr Smith said InTouch is a large company with a strong financial position and a capitalisation of 40 billion baht, debt of just 8 billion, and D/E ratio of less than 1.

If Gulf can purchase more than 50% of shares, it can file a consolidated financial statement so the D/E ratio of the two companies are combined. 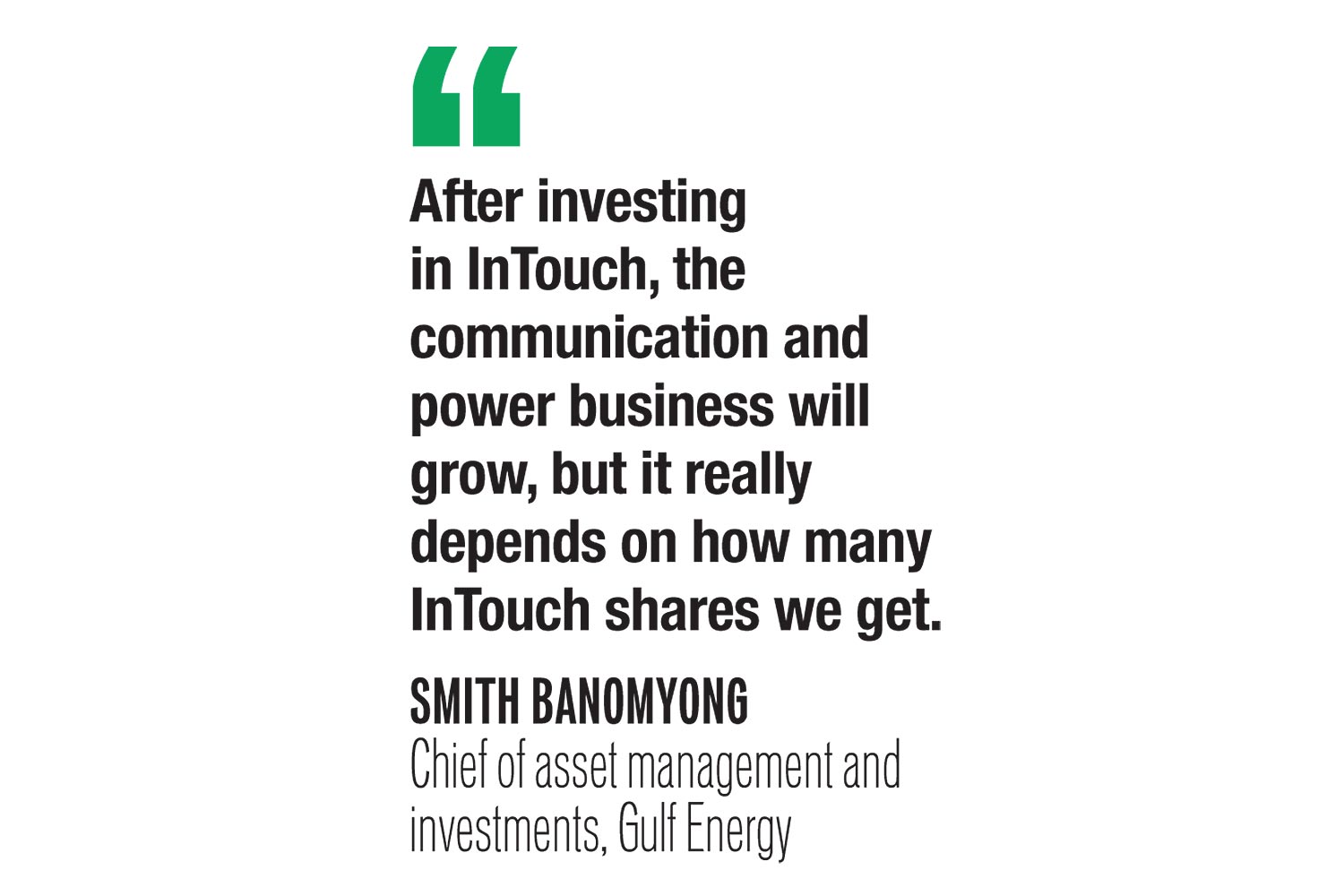 He said based on Thai equities statistics, there has never been a tender offer where a company acquired 100% of shares, so it is unlikely Gulf will spend 160 billion baht to acquire the remaining 81.07% of InTouch.

Moreover, financial institutions accept a maximum D/E ratio of no more than 3.5.

"We believe the tender prices are appealing and are hoping for over 50% of shares," said Mr Smith.

"We gave our existing shareholders a reasonable price for both Gulf and InTouch, and if Gulf becomes InTouch's majority shareholder, we have the opportunity to build a synergy between the two companies."

Investing in InTouch adds digital infrastructure and will prepare Gulf for future business expansion, he said.

"After investing in InTouch, the communication and power business will grow, but it really depends on how many InTouch shares we get," said Mr Smith.

"If we get a lot of InTouch shares, communication revenue might be more than the energy sector in the first year, while in the following years, income from the energy business could continue to increase and overtake the telecommunications business."

The deal is part of the vision of Sarath Ratanavadi, Gulf's major shareholder, to ensure long-term growth, he said.

Pisut Ngamvijitvong, senior director of analysis at Kasikorn Securities (KS), said Gulf will be able to leverage its potential to access more loans because InTouch has very little debt.

InTouch, through its subsidiary AIS, has a mobile subscriber base of 40 million people and infrastructure assets such as telecommunication towers and fibre-optic networks that can earn increasing income and reduce the debt of Gulf in the future if it sells InTouch assets to an infrastructure fund, similar to a move by True Corporation, the nation's second-largest telecom firm.

However, the prospect of buying more than 50% of shares in InTouch is unlikely, he said.

It can hold more shares than Singtel Group, but it is expected that many investors will choose to hold onto their shares as the current market price is close to the tender offer price, he said.

However, the tender period may last until July or August. During that time, if the market sentiment is good, InTouch shares could rise above the tender price, at which point no one would sell, said Mr Pisut.

However, if InTouch's price falls considerably, Gulf may be able to snatch up a larger share of the stock.

He said Gulf may want to hold only InTouch, which provides sufficient control over AIS and Thaicom.

KS has predicted an 80% probability the deal will go through, he said.

KS said Gulf's increasing influence over InTouch will be a positive for AIS's shareholders, rather than a negative.

There is a chance Gulf may become the largest shareholder of InTouch and AIS, replacing Singtel or Temasek, which would remove a political roadblock for the group, he said.

Gulf needs an additional 15% stake in InTouch to exceed Singtel or Temasek as the largest shareholder of InTouch and AIS.

Gulf, said Mr Pisut, will not only bring better B2B and vertical business opportunities to the group, but also in the B2C segment.

Additionally, Gulf will push for more aggressive capital management or even an asset monetisation exercise from AIS to beef up the dividend for Gulf's deleveraging, he said.

Sornchai Pitthayaprug, the senior analyst at Capital Nomura Securities, said another option to finance the deal is to launch a perpetual bond, which is a type of financial instrument that can be counted as equity without increasing the D/E ratio. The company wishes to keep its D/E under 3.5 or else its credit rating will drop.

A source associated with InTouch who requested anonymity said talks between Gulf chief executive Sarath Ratanavadi and representatives from Singtel began in mid-2020 when Temasek gradually sold its shares in InTouch. Singtel is the major shareholder at InTouch.

Mr Sarath was keen on acquiring InTouch shares for investment and began connecting with representatives of Singtel through the chief executive of AIS, the source said.

The source, however, said Gulf's tender offer to all shareholders of InTouch is an "unexpected" move in the eyes of Singtel.

Moreover, there are still talks to be held between Gulf and Singtel, but both have a positive outlook for this long-term investment plan.

"I believe Gulf may acquire an additional 12-15% stake in InTouch, which would increase its shareholding proportion to around 30%," the source said.