Export growth for March seen at 8%

Minister anticipates target may be beaten

Commerce Minister Jurin Laksanawisit expects 8% growth of exports in March, driven partly by a squad of national and provincial "salesmen" who are helping arrange online business matching between Thai exporters and foreign buyers to boost trade. 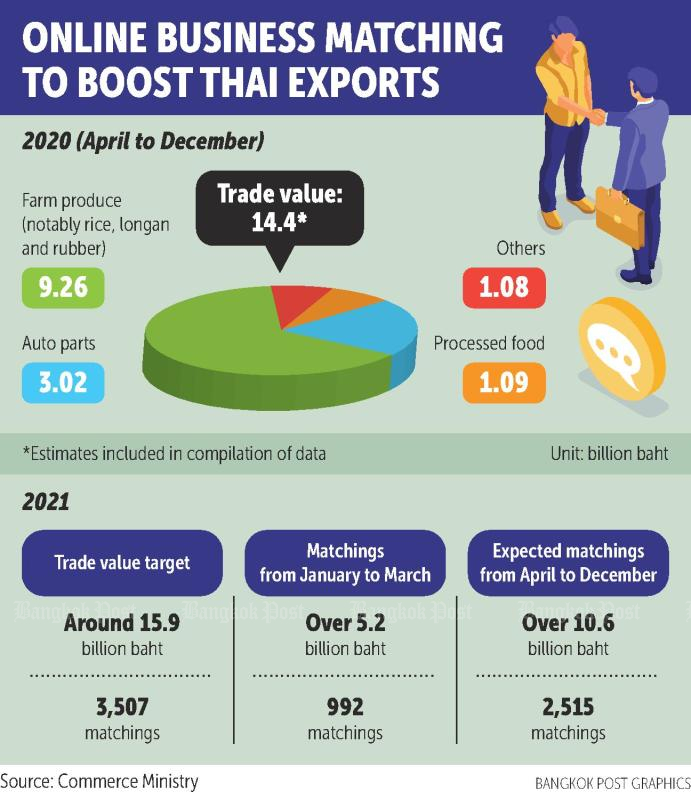 The forecast, which followed the latest assessment of export markets by the Commerce Ministry and key business groups, comes ahead of the release of official export figures by the Trade Policy and Strategy Office tomorrow.

"Thai exports bottomed out of their lowest point and will be on the rise now," said Mr Jurin.

In May and June last year when the world was first gripped by lockdown measures to stem the pandemic, Thai exports ended up in negative territory, contracting by 22% and 23%, respectively.

However, the country's exports experienced less severe contractions over following months until December, when they grew by 4.7%.

Exports edged up 0.35% in January this year before contracting 2.59% in February due mainly to a drop in industrial products and gold shipments.

But if factors such as gold and oil trade had been removed, February exports would have stood in positive territory, said Mr Jurin.

"We want to assure Thai people our exports are rising. While the tourism sector remains seriously hit, exports continue to move forward," he said.

The minister attributed the success to the private sector and teams of salesmen, or officials working to promote Thai products overseas.

"We set a target to reach nearly 16 billion baht in value this year, but we expect the actual number will be greater than this," said Mr Jurin.

More business matchings are anticipated, including the facilitation of talks between Thai businesspeople and US-based multinational retailer Walmart Inc.

In another development, the Business Development Department recorded 8,841 new companies and partnerships in March, with registered capital of 19.4 billion baht, mostly in building construction, followed by real estate development and restaurants.