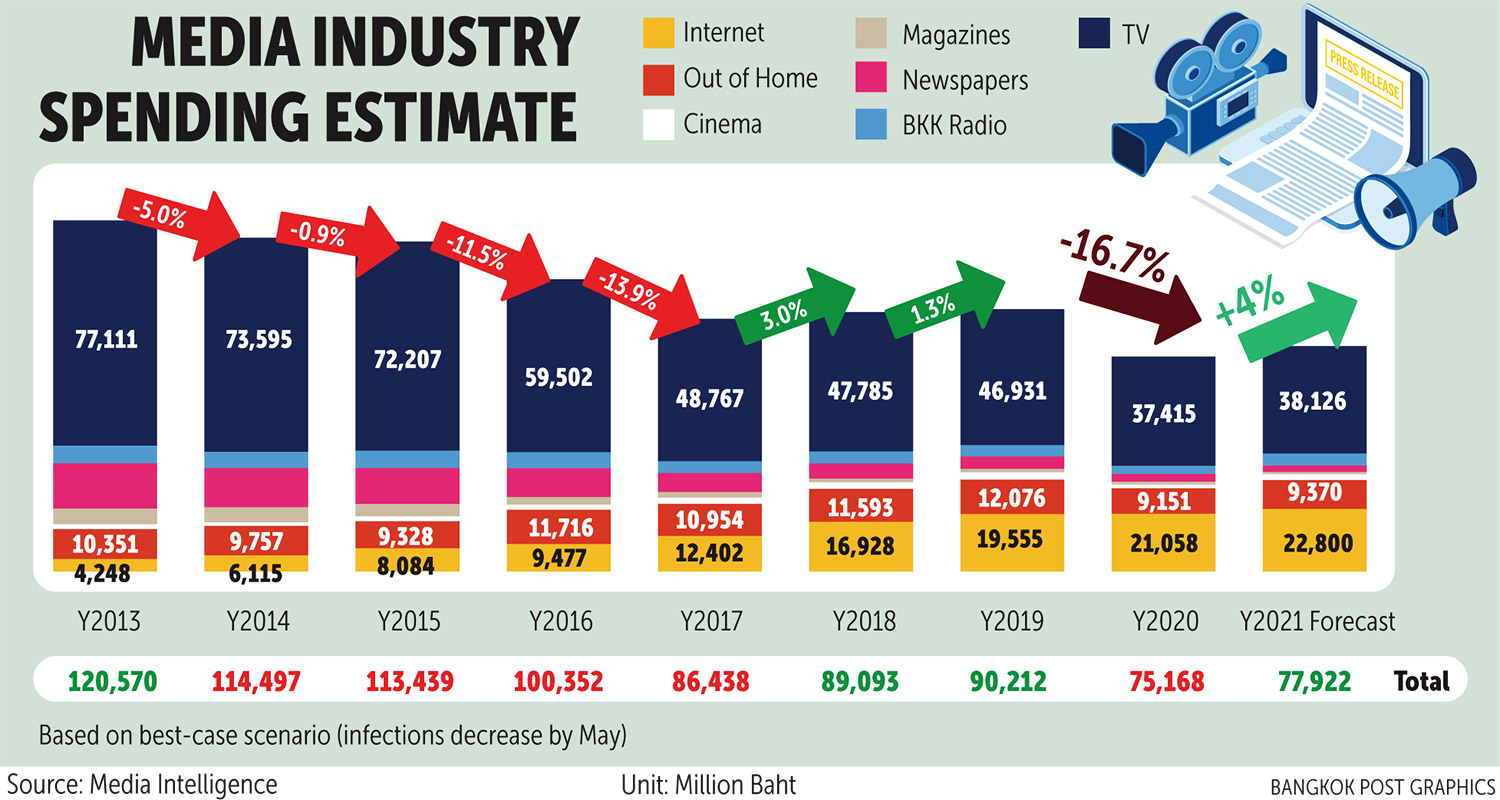 "In April we witnessed about 50% of customers postponing campaigns because of the outbreak, which is forcing people to stay home," said MI president Pawat Ruangdejworachai in a virtual media briefing about the country's media spending outlook.

"This outbreak will affect overall media spending in the second quarter."

In mid-March, spending bounced back, which created confidence that spending this year would see a growth of 8-10%, but the situation has changed with the fresh wave, said Mr Pawat.

In the first quarter of 2021, spending shrank 2.3% year-on-year to 18.6 billion baht due to the second wave that started around Christmas.

The major spenders in that quarter were auto, non-alcoholic drinks, dietary supplements, health products and e-commerce, he said.

In the second quarter, out-of-home and TV media are expected to be hardest hit by the pandemic while auto and non-alcoholic drinks are reducing their spending.

For 2021, the media spending outlook has been revised from a yearly growth of 8-10% to 4% with spending of 77.9 billion baht in the best-case scenario, based on the assumption that the government's restrictions bear fruit with infections dropping by May.

In the worst-case scenario with the infection cases soaring and the situation recovering in the second half of this year, spending is likely to see either flat growth or only a 1% rise to 75.9 billion.

In this worst-case scenario, spending on TV remains at the top, followed by internet and out of home.

According to Mr Pawat, the internet is expected to surpass TV in terms of media spending within two years.

"At present, internet shares 30% of the spend and TV makes up 50% and now we are seeing customer behavior changing towards online engagement."

Mr Pawat said the return of influential news anchor Sorrayuth Suthassanachinda to Channel 3 in May is expected to spark competition in news TV programmes, particularly with TV 7, Amarin and Thairath TV, which could offer promotions and attractive prices to marketers.

The newsman, sentenced to eight years in January 2020 in an advertising revenue embezzlement case, was released from Bangkok Remand Prison in March.

His return, according to Mr Pawat, is unlikely to make a significant impact on spending on news TV programmes as the TV audience has declined by 25% since 2017 due to behavioural changes.

Usually, marketers spend around 30% of their budgets on drama programmes and 20-25% on variety and entertainment.