People wait their turn to be tested for Covid-19 behind a mobile medical unit stationed at Khao San Road. (Photo by Pornprom Satrabhaya)

The third wave of the pandemic is the biggest in Thailand and threatens to reduce GDP growth in the country by 1.2 percentage points this year, forcing the state and private sectors to cooperate to survive the crisis.

More powerful measures to stop the spread of the virus and improve the tepid economy are needed and must be administered quickly.

Armed with a shield

The Federation of Thai Industries (FTI) and the Thai Chamber of Commerce are insistent on building herd immunity in the country this year because it is the best way to escape the cyclical outbreaks that have battered the economy for over a year.

Their umbrella group, the Joint Standing Committee on Commerce, Industry and Banking (JSCCIB), hopes to activate plans to speed up the national vaccination campaign after talks with Prime Minister Prayut Chan-o-cha scheduled for April 28.

JSCCIB wants the government to allow the private sector to import vaccines and inoculate employees affiliated with FTI, the chamber and the Thai Bankers' Association, another committee member.

"They should receive vaccines without waiting for the state inoculation programme."

Thailand has been very slow in distributing vaccines, with only 0.4% of 69 million people receiving jabs since late February, said Sanan Angubolkul, chairman of the Thai Chamber of Commerce, after a meeting on April 19 with 40 chief executives on the joint effort to increase vaccine distribution.

Among participating companies are Google, Line and Facebook, which are expected to keep the public informed about vaccines in order to encourage them to receive jabs, said the chamber.

Facebook is awaiting clear guidelines from the government about its vaccine rollout.

"In Thailand, we are focusing on collaborating with authoritative partners like the Department of Disease Control and Thai Health Promotion Foundation to educate and keep our community informed with credible health information."

Phichet Rerkpreecha, chief executive of Line Thailand, said its platform can serve as a source for information about the pandemic, with Covid-19 updates including vaccine information.

The Public Health Ministry is introducing the "Mo Phrom" (Doctors are ready) Line official account (OA) to enable people to register for vaccination and reserve a queue for inoculation. The system is scheduled to open for booking from May 1, the ministry said.

State agencies need to have a team to customise the features on Line OA to cater to the public's needs in terms to vaccination. 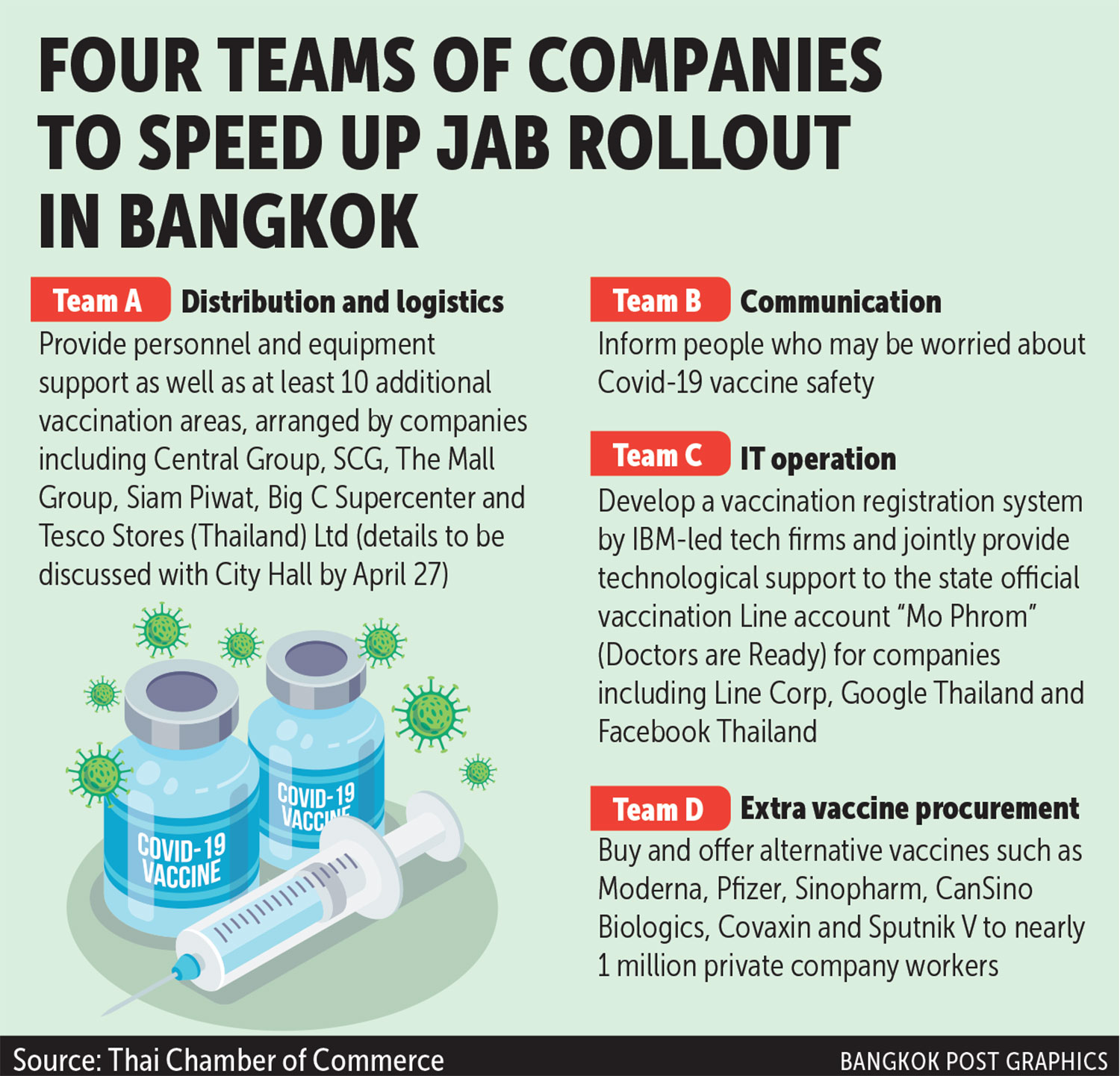 The government must continue its economic stimulus packages, renewing existing measures and launching new ones, as soon as mid-May to entice consumer spending, said Thanavath Phonvichai, president of the University of the Thai Chamber of Commerce.

One effective scheme is co-payment subsidies, in which the government pays for 50% of food, drink and general goods purchases of up to 150 baht per person per day, capped at 3,500 baht per person, he said.

If the government spends 50-100 billion baht on the scheme, it can bolster economic activities by 100-200 billion, said Mr Thanavath. 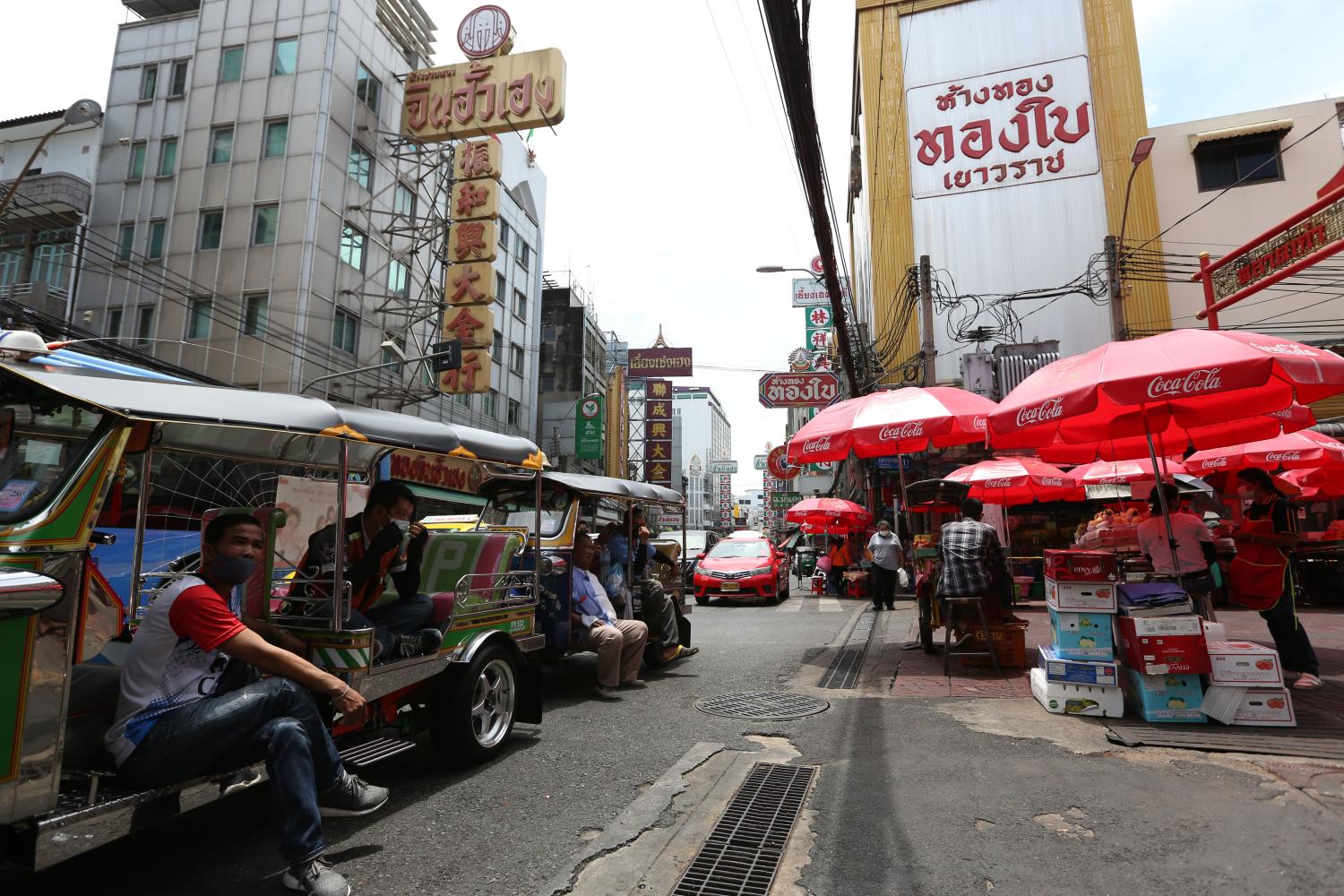 Traffic at Yaowarat Road and Sampeng Market is sparse during the third wave of Covid-19 in Bangkok. Wichan Charoenkiatpakul

"The scheme should last four months so people do not feel the need to spend money in a rush," he said.

Mr Supattanapong said the third phase of the co-payment subsidy scheme is likely to go before the cabinet for approval next month, allowing registrants to participate in the scheme by June.

The second phase of the co-payment scheme ended in March.

The scheme, which targeted high-income earners, allowed them to deduct up to 30,000 baht spent on certain goods and services.

The deduction should increase to 50,000 baht to urge people to spend more, he said.

Though the government would lose around 10 billion baht in tax revenue, it could stimulate spending worth up to 50 billion baht, said Mr Thanavath.

According to Mr Supattanapong, the government also plans to roll out tax incentives to encourage cash-rich depositors to spend more.

The Finance Ministry and the National Economic and Social Development Council have been tasked with designing the tax measures, he said, adding the government remains adamant about its plan to reopen Phuket to vaccinated foreign tourists on July 1.

On the other hand, Pipat Luengnaruemitchai, chief economist and deputy head of research at Kiatnakin Phatra Financial Group (KKP), said he does not expect aggressive policy stimulus, given the conservative stance of policymakers.

On the fiscal side, the government still has about 250 billion baht of the 1-trillion-baht fiscal stimulus available.

The Bank of Thailand's Monetary Policy Committee is also reluctant to lower the policy rate beyond what seems to be an effective lower bound at 0.5%. Apart from procuring more vaccines to create herd immunity, which is the main method to convince foreign visitors to return, tourism operators are preparing to rebuild domestic travel sentiment as soon as the third wave is controlled, said Chamnan Srisawat, president of the Tourism Council of Thailand.

Tourism operators such as hotels, restaurants and transport firms have received tourism safety standards from the Safety and Health Administration, and must work to maintain a high level of safety and hygiene, he said.

Following these guidelines means tourists used to living with the pandemic can feel confident about travelling safely, without risking infection, said Mr Chamnan.

He acknowledged the third wave affected domestic travellers' confidence, but said many of them still crave to make trips.

The government's tourism subsidy schemes also support domestic travel, such as the extension of the We Travel Together programme and the novel Tour Teaw Thai, which has yet to be unveiled.

It is essential for exhibitors to strictly follow health and safety guidelines to prevent virus transmission, he said.

Mr Pravit said organisers have to build confidence that exhibitions can proceed as scheduled to boost the overall economy and allow the country to recover from outbreaks faster. 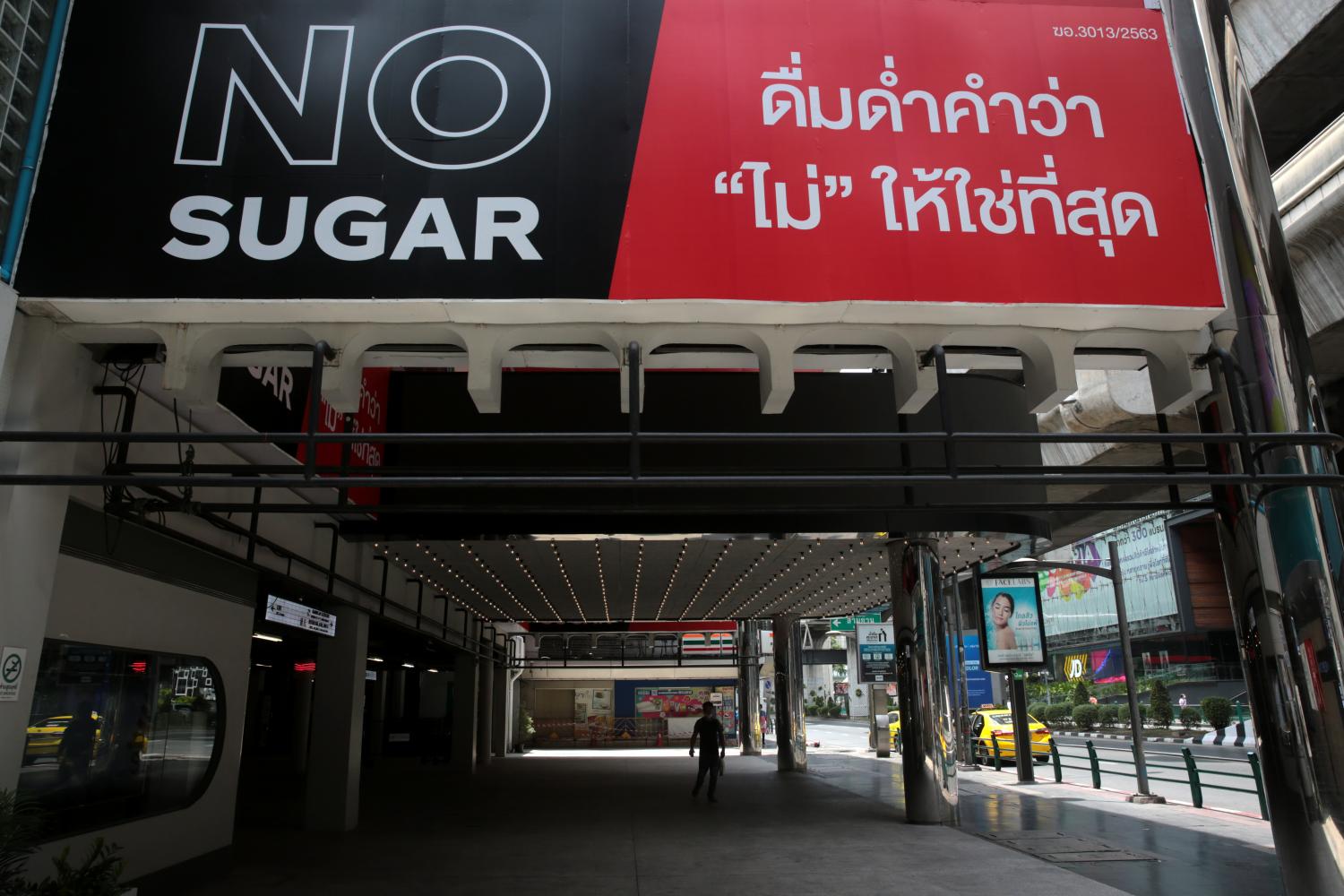 Shopping area in Pathumwan district is almost deserted as many shoppers choose to stay away from public places amid the third wave of Covid-19, which has dealt yet another blow to retailers still struggling as a result of previous outbreaks. Chanat Katanyu

Mr Supattanapong remains optimistic the rate of infections will improve over a couple of weeks, saying government agencies and the private sector are experienced in handling infections.

"Many forecasting agencies downgraded their economic growth projections, but the government remains upbeat about the country's overall economic prospects," he said.

"If the infections can be kept under control within a month, the impact on the economy is likely to be insignificant. The government is rolling out additional aid measures to mitigate the impact and rehabilitate the economy."

Mr Supattanapong insisted the government has no need for additional borrowing to cope with the latest infections or to stimulate the economy. The country still has about 380 billion baht available in funds to implement additional economic stimulus measures, he said.

Such funds stem from an estimated 250 billion baht left over from the 1-trillion-baht loan decree, 98 billion from the central budget reserved for emergency purposes, and 36.8 billion allocated to fight Covid-19 outbreaks in fiscal 2021.

"Nonetheless, if new infections break out in the future, additional borrowing and more funds will inevitably be needed to shore up the economy and ensure people's health," said Mr Supattanapong.

He reported to Gen Prayut foreign investors remain confident in Thailand's overall investment climate, and new investment measures are set to be announced soon after the fresh wave of infections ease.

Thailand had an excellent record in controlling the first two waves of Covid-19 compared with other countries, said Mr Pipat of KKP.

Thailand has only had three outbreaks in the past 16 months.

"In retrospect, the first two outbreaks were relatively mild and the situations were brought under control relatively quickly. However, the economic impact was severe, given the loss of foreign tourism revenues," he said.

During the third wave, the number of daily new cases and active cases have exceeded the previous peaks, and the virus has spread quickly throughout the country in less than two weeks, said Mr Pipat.

"The economic impact will be more severe and last longer than the second wave in January," he said.

Yet the government has refrained from announcing strict lockdown measures across the country and focused on risk-based and area-based measures, which are likely to be less disruptive, said Mr Pipat.

However, KKP expects the current outbreak will lead to restriction measures in place for as long as two months, longer than the previous outbreak.