Containers washed overboard from Maersk Eindhoven which experienced an engine stop in harsh weather near Japan on Feb 17 while en route from Xiamen, China, to Los Angeles, California.

SINGAPORE: Containers piled high on giant vessels carrying everything from car tyres to smartphones are toppling over at an alarming rate, sending millions of dollars of cargo sinking to the bottom of the ocean as pressure to speed deliveries raises the risk of safety errors.

The shipping industry is seeing the biggest spike in lost containers in seven years. More than 3,000 boxes dropped into the sea last year, and more than 1,000 have fallen overboard so far in 2021.

The accidents are disrupting supply chains for hundreds of US retailers and manufacturers such as Amazon and Tesla.

There are a host of reasons for the sudden rise in accidents. Weather is getting more unpredictable, while ships are growing bigger, allowing for containers to be stacked higher than ever before. But greatly exacerbating the situation is a surge in e-commerce after consumer demand exploded during the pandemic, increasing the urgency for shipping lines to deliver products as quickly as possible.

“The increased movement of containers means that these very large containerships are much closer to full capacity than in the past,” said Clive Reed, founder of Reed Marine Maritime Casualty Management Consultancy. “There is commercial pressure on the ships to arrive on time and consequently make more voyages.”

After gale-force winds and large waves buffeted the 364-metre One Apus in November, causing the loss of more than 1,800 containers, footage showed thousands of steel boxes strewn like Lego pieces onboard, some torn to metal shreds. The incident was the worst since 2013, when the MOL Comfort broke in two and sank with its entire cargo of 4,293 containers into the Indian Ocean.

In January, the Maersk Essen lost about 750 boxes while sailing from Xiamen, China, to Los Angeles. A month later, 260 containers fell off the Maersk Eindhoven when it lost power in heavy seas.

The need for speed is creating precarious conditions that can quickly bring disaster, according to shipping experts. The dangers range from stevedores incorrectly locking boxes on top of one another to captains not deviating from a storm to save on fuel and time as they face pressure from charterers, they said.

One wrong move can put cargoes and crew at risk.The chances for mishaps are increasing as exhausted seafarers face deteriorating conditions during the pandemic.

Allianz Global Corporate & Specialty estimates that human error contributes to at least three-quarters of shipping industry accidents and fatalities. Almost all the recent incidents have occurred in the Pacific Ocean, a region where the busiest traffic and the worst weather collide. 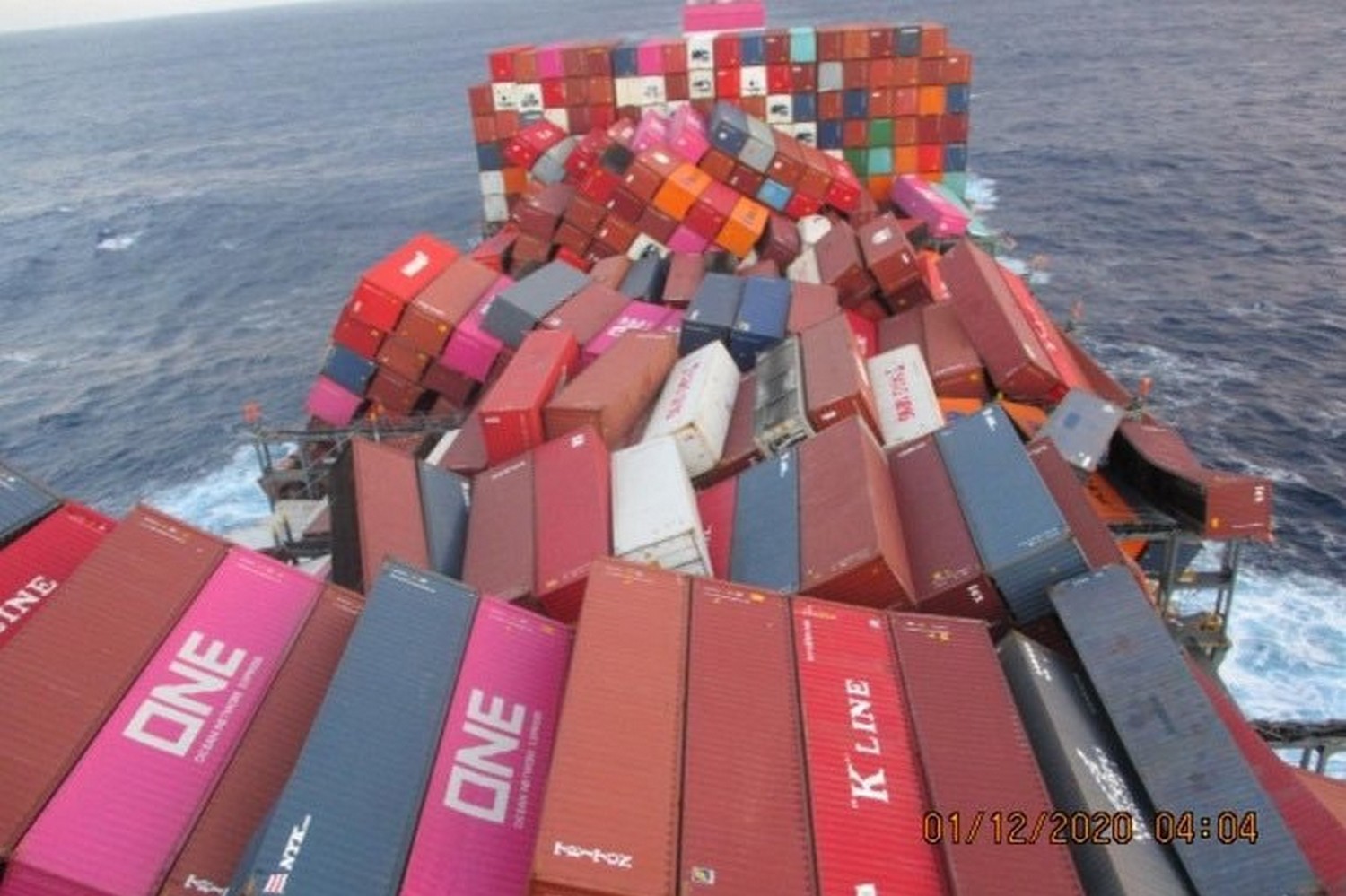 An estimated 1,816 containers were lost from the One Apus, a 14,052 TEU containership, after a multiple stack collapse on board due to severe weather conditions while the vessel was enroute from Yantian in China to Long Beach in USA. (Image: https://twitter.com/connorhelm/status/1334268904886194182)

The sea route connecting Asia’s economies to consumers in North America was the most lucrative for shipping companies last year. China’s exports have gone on a tear as the pandemic fuels demand for all the stuff people need to work, learn and entertain from home.

The journey has always been rough, but it has become more perilous due to changing weather patterns. The rise in traffic from China to the US this past winter coincided with the strongest winds over the Northern Pacific since 1948, increasing the likelihood of rougher seas and bigger waves, said Todd Crawford, chief meteorologist at The Weather Company.

“That’s a very small percentage lost,” said Jacob Damgaard, associate director of loss prevention at Britannia P&I at a conference in Singapore on April 23. “But it’s almost 60% of the monetary value of all container incidents.”

At an average of US$50,000 per box, the One Apus was estimated to have lost $90 million in cargo alone, the highest in recent history, according to Jai Sharma, a partner at maritime law firm Clyde & Co in London. Losses so far this year have totaled an estimated $54.5 million, Bloomberg data show.

The issue is also gaining attention as last month’s grounding of the 400-metre vessel Ever Given in the Suez Canal threw a spotlight on the vulnerability of the shipping industry. The mega ship blocked traffic through the vital waterway for nearly a week, and the impact on global trade is still being felt.

So far, none of the recent container accidents has been directly attributed to safety lapses. The International Maritime Organization said it is still awaiting results of investigations into the latest incidents, and cautioned about making any conclusions before that.

However, many experts say the situation has grown more dangerous because of pressure on supply chains since the pandemic. When ships approach heavy weather, captains have the option to steer away from the danger.

But the attitude is “don’t go around the storm, go through,” said Jonathan Ranger, head of marine Asia Pacific at American International Group Inc.“When you combine that with potentially poor maintenance of twistlocks and cabling required to secure these boxes, then it’s an accident waiting to happen,” he said at the industry conference in Singapore.

With boxes stacked ever higher, a ship can become more unstable in a storm -- wave after wave can cause the vessel to roll at steep angles, putting strain on the securing of containers. The situation becomes even worse if the stack is top-heavy. That can happen when there’s incorrect weightings on the bills of lading for containers, which many in the industry say happens too often.

"You cannot see inside the containers,” said Arnaldo B. Romero, a captain who sailed from Japan to South America late last year. “So when the cargo is heavy and the officer in charge of cargo planning puts it high up, during the rolling of the ship, we may not have control anymore.”

There is also the health and safety of the seafarers at stake. The toppling of multiple tiers of 40-foot containers during a raging storm is one of the most terrifying experiences for a captain and crew. Post-traumatic stress disorder among crew members is common, according to Philip Eastell, founder of Container Shipping Supporting Seafarers.Concern is growing for the industry to address the situation.

“Traffic on the seas is different from what it was 10 years ago,” said Rajesh Unni, founder of Synergy Marine Group, which provides services to ship owners. “How do we adapt as an industry? It’s convenient to blame the captain, but we need to look at how the port infrastructure needs to change, how ships transit.”

The agency said its sub-committee on the carrying of cargoes routinely looks at container issues, and has scheduled its next meeting for September. AIG’s Ranger says companies should be prepared to go around storms and maintain vessels properly.

“These vessels are designed to carry the boxes, and to have these losses is -- dare I say it -- unacceptable.”

KYIV: The renewed Russian offensive in Ukraine's Donbas has turned the eastern region into "hell", President Volodymyr Zelensky said, as the United States approved a gargantuan US$40-billion aid package for the country.