The performance of securities firms this year will improve significantly because the daily trading value on the Stock Exchange of Thailand (SET) has increased to nearly 100 billion baht per day, says SCB Securities (SCBS). 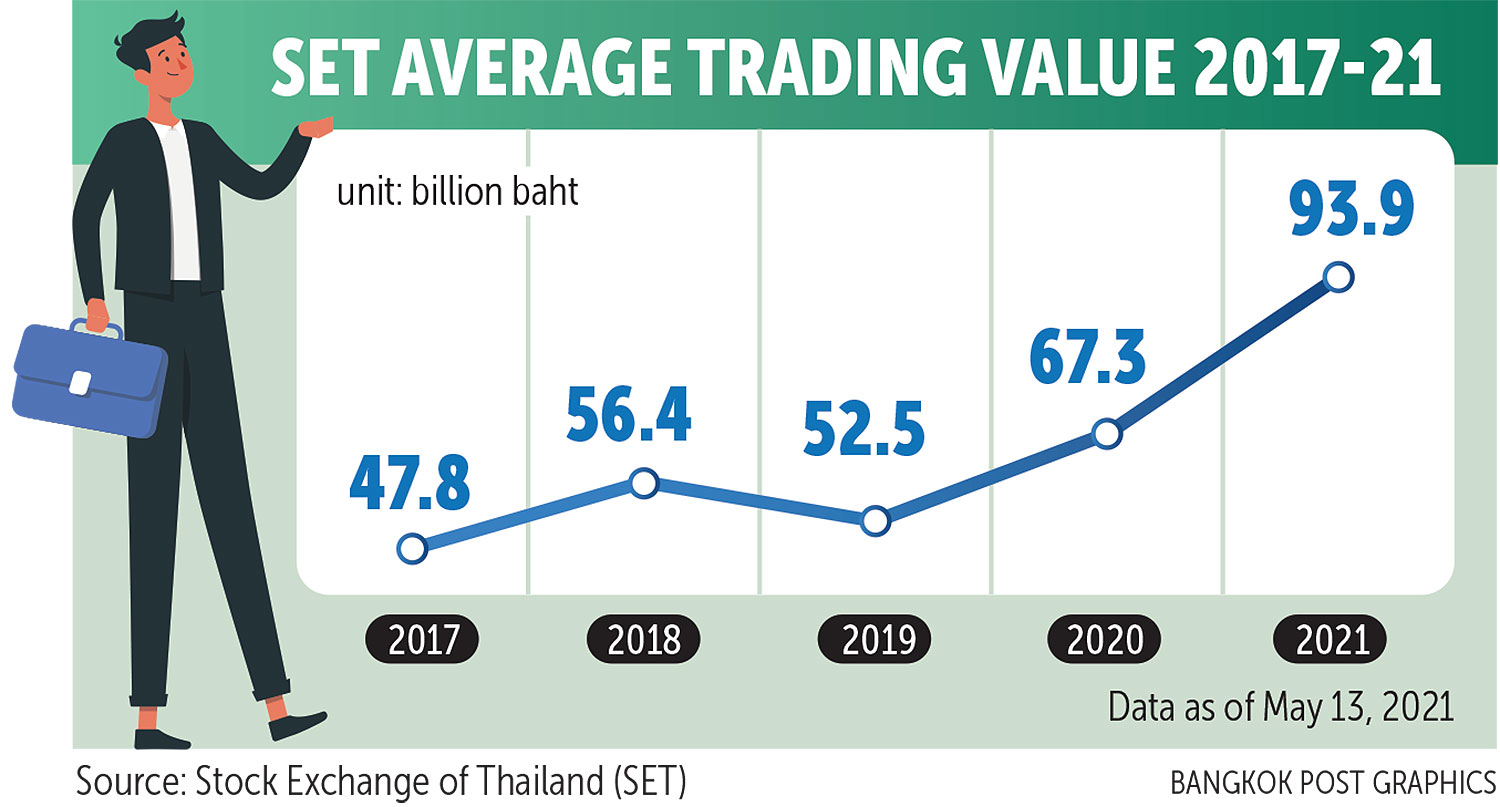 The SET reported the average trading value on the SET and Market for Alternative Investment (MAI) for the first four months this year was 96.1 billion baht.

Moreover, the number of new investors has increased by roughly 700,000 trading accounts in the first four months, totalling over 4 million accounts at present.

According to SCBS, the trading value on the SET continues to rise thanks to positive market sentiment ramped up by vaccine rollouts and a prospective economic recovery. This year's average daily trading value is expected to increase by 30% to 80 billion baht per day, excluding brokers' proprietary trading.

In addition, securities companies expect increased profits from their investments as well as a rise in share prices. Securities firms should have strong earnings growth in their core brokerage business, which offers good dividends this year, said SCBS.

SCBS named the most attractive securities business stocks as Maybank Kim Eng Securities Thailand (MBKET) and Asia Plus Group Holdings (ASP), which both have the ability to pay high dividends and are likely to see capital gains.

ASP, a leader in the financial advisory business, is expected to be the adviser for four initial public offering (IPO) deals this year. The IPO advisory services will help support the company's fee-based income, excluding brokerage fees, said SCBS. The company's investments in various securities in both domestic and foreign markets will also generate more returns to support ASP's income this year.

Meanwhile, MBKET, a leading retail brokerage firm, is also expecting to earn more income from securities trading commissions, based on its core business.

SCBS expects securities firms to offer a higher rate of dividend payments in 2021 than the previous year. MBKET expects to pay a dividend yield of 8.3% and ASP to pay 8.9%.

SCBS upgraded the rating of MBKET and ASP from "neutral" to "outperform" thanks to prospects of higher dividends. SCBS also adjusted the target share price of MBKET from 10 baht to 11.30 baht and ASP from 2.40 baht to 3.60 baht. The upgrade is backed by a large average daily turnover.

Arapat Sangkharat, deputy chief executive of MBKET, said in the midst of the pandemic, the company has expanded into additional non-brokerage businesses such as debt instrument deals. MBKET is also seeking opportunities to provide trading services in global markets such as the US, UK and Japan to find other ways to generate returns in the future.

Wijit Arayapisit, a strategist at MBKET, said Thai stocks in the second half of the year should be more active than the first half. Economic and investment conditions should recover more after the world has been widely vaccinated, said Mr Wijit.

In addition, shares associated with cannabis and hemp have high potential for growth in the second half because it is believed some products from this group will be launched by the end of this year, generating revenue for companies in 2022, he said.

"The outlook for securities investments in the medium and long term is positive. If the global economy recovers, investing in the stock market should continue with an uptrend for at least another 1-2 years," said Mr Wijit.