Thai stocks are continuing to plunge based on a multitude of domestic and international factors, while the MSCI is expected to weigh down the Thai stock market by 0.1% to 1.73% as daily Covid infections spiked to a new all-time high yesterday. 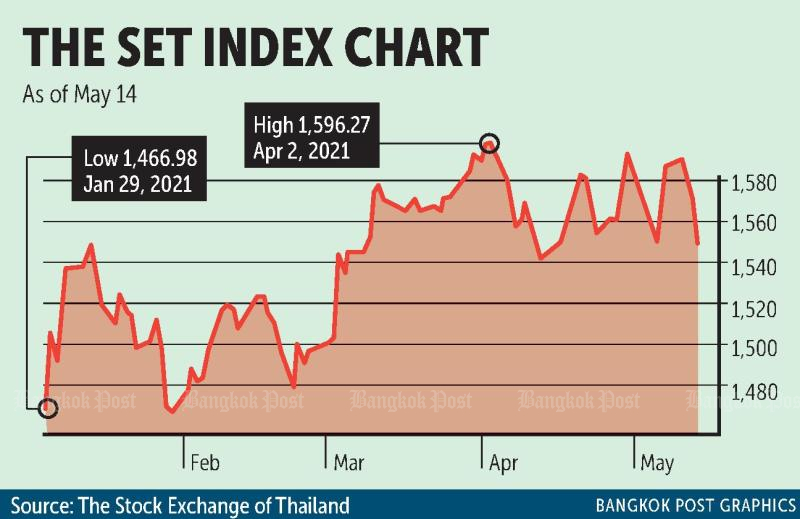 CNS said the GDP will increase by 2.5% and 3.9% in the third and fourth quarters, respectively.

The escalating Covid situation domestically is a factor that needs to be monitored, CNS stated, as the daily number of infections remains high as cases from prison clusters raised the number to a new record daily high of 9,635 yesterday.

In addition to the pandemic, the government's relaxation and tightening of control measures is another factor to follow as the domestic vaccination rate is currently 2% and is lagging behind the government's target to inoculate 70% of the population by this year.

Another negative factor is the MSCI Index's weight rebalancing in the second half of this year as Thai stocks in the Index are expected to be downgraded by 0.1% to 1.73%, representing a loss of approximately US$341 million in value.

Meanwhile, the SET Index slipped in the morning session before rebounding to close at 1,549 points, or down by 0.02% yesterday, pressured by fears over the surge in Covid cases while global gold price reached a three-month high amid inflation hedging.

Mr Natapon expects the MSCI Index rebalancing to have a significant impact on the large and mid-cap shares in the Index. These share prices would be more stable after the rebalancing.

"The index has a chance to touch 1,480 points with external pressures from the US and European bourses and fears over the 'sell in May' phenomenon," he said.

He said another factor to monitor is geopolitical conflict as it is likely to resume when the outbreak in many countries improves.

"Many safe assets such as gold and commodities have recovered as global shares became volatile amid corrections of digital assets," said Mr Natapon.