Unemployment is likely to soar this year because of the severe impact being felt by the third wave of Covid-19, warned a government planning unit.

Danucha Pichayanan, secretary-general of the National Economic and Social Development Council (NESDC), said the third wave of the pandemic is likely to be a prolonged affair and prevent the economy from reaching its goal due to a slow down in activity.

"Workers in micro, small and medium-sized enterprises [MSMEs] might experience the most loss or have to accept reduced hours as these businesses have been hit hard since last year. The GDP of MSMEs has contracted by 9.1%," said Mr Danucha. "If the outbreak is not quickly contained, these businesses may be unable to continue operations, resulting in the permanent termination of employees and delaying recovery."

Mr Danucha said workers in the tourism industry will also be laid off more frequently.

He cited the Tourism Marketing Research Center of TAT which has predicted that tourism will likely return to normal in 2026. The effects of Covid-19 will delay the resumption of normal tourism services and this will affect more than seven million tourism workers. If the workers are laid off, they will be unable to return to work in the same field in the near future and may have to change their careers altogether.

Mr Danucha also warned there may not be enough job openings to accommodate recent graduates. With an economy that is growing at a slower rate than expected, entrepreneurs will postpone hiring new employees and this will affect 490,000 new graduates. Meanwhile, last year's graduate and worker programme under the loan decree, which had a 12-month employment period, is coming to an end and this may affect approximately 140,000 workers.

Mr Danucha said workers' quality of life will be also affected as their working hours have been reduced for six consecutive quarters. 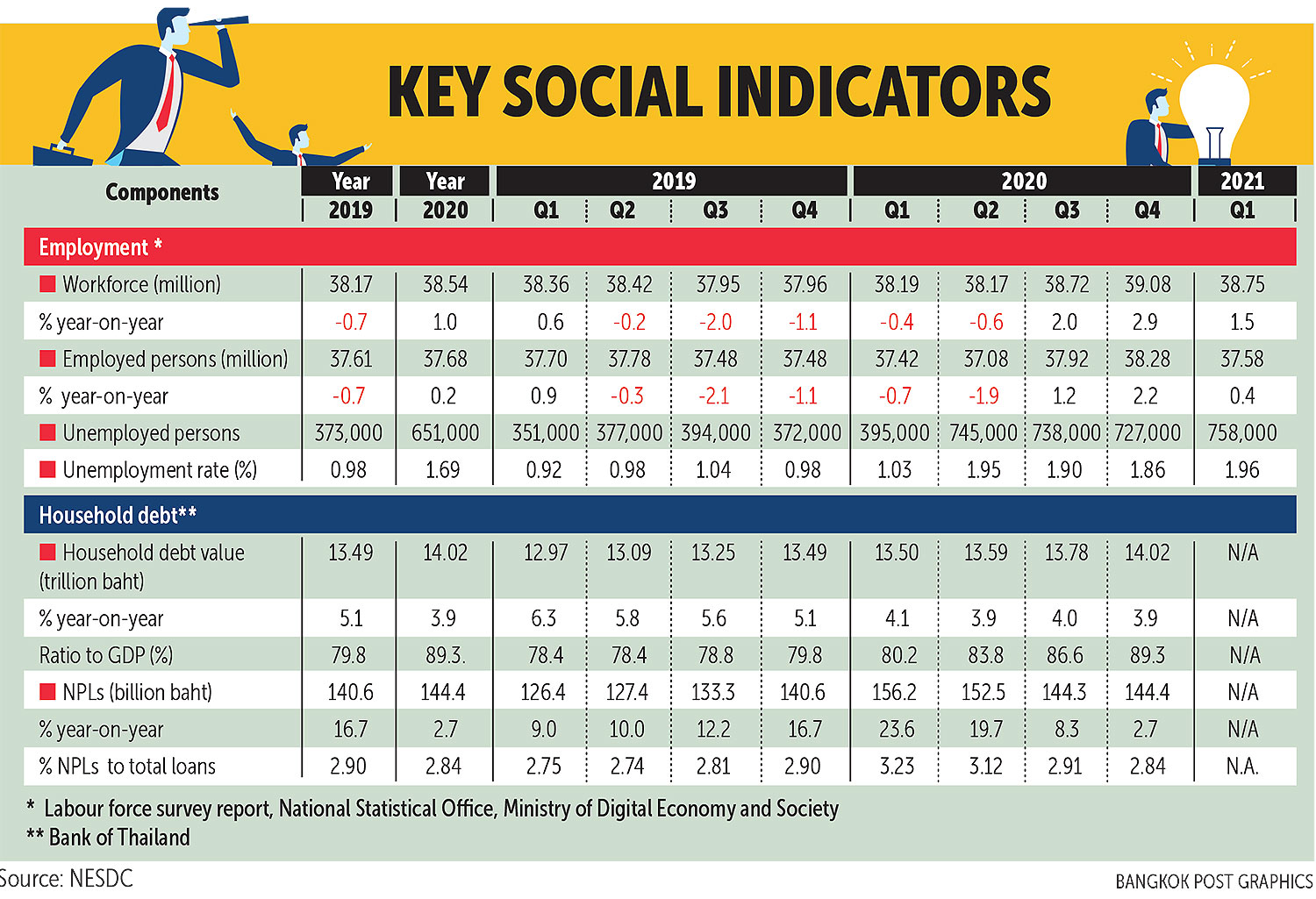 Those who are unemployed due to Covid-19 are more likely to be unemployed in the long term. Since the outbreak began in 2020, many laid-off formal workers have become informal workers, a group that has not been protected and lacks social security.

The NESDC reported on Monday that the unemployment rate hit a 12-year high in the first quarter of this year due to the fresh waves of Covid-19 outbreaks.

The rate is the highest since 2.08% was recorded in the first quarter of 2009 during the global financial crisis.

The total amount of working hours was also down to 40.1 hours per week in the first quarter, a 1.8% decrease from the same period last year and a decline for the sixth consecutive quarter.

The number of people in the labour force stood at 38.8 million in the first quarter of 2021, up by 1.5% from the same period in the previous year due to the entry of people who were previously not in the labour force. Meanwhile, the total number of employed workers reached 37.6 million, up 0.4% due to an increase in employment in the agricultural sector, which has absorbed some of the workers laid off in other sectors. The price of many agricultural products has risen considerably and this has attracted more workers to enter this sector.

In a separate development, the NESDC reported on Monday that household debt was 14.02 trillion baht in the fourth quarter of 2020, a rise of 3.9% compared to 4.0% in the previous quarter and accounted for 89.3% of GDP.

Household debt continued to rise as a result of the economy's contraction.

According to the NESDC, the household debt to GDP ratio is expected to remain high in 2021. The economy has not yet recovered to pre-Covid-19 levels and the labour market could be hit even harder and this will have an impact on income and cause households to have more liquidity issues.

"Low-income households, in particular, will be cautious with their spending in 2021, especially for durable goods. As a result, demand for homes and automobiles has slowed considerably. Meanwhile, credit card and personal consumption loans may see an increase in demand due to liquidity issues as well as low-interest loans for citizens of government-owned financial institutions such as the Government Savings Bank," the government's think tank said.