Exports are maintaining healthy growth momentum, fetching more than US$20 billion for three consecutive months and recording the highest growth rate in 36 months in April. 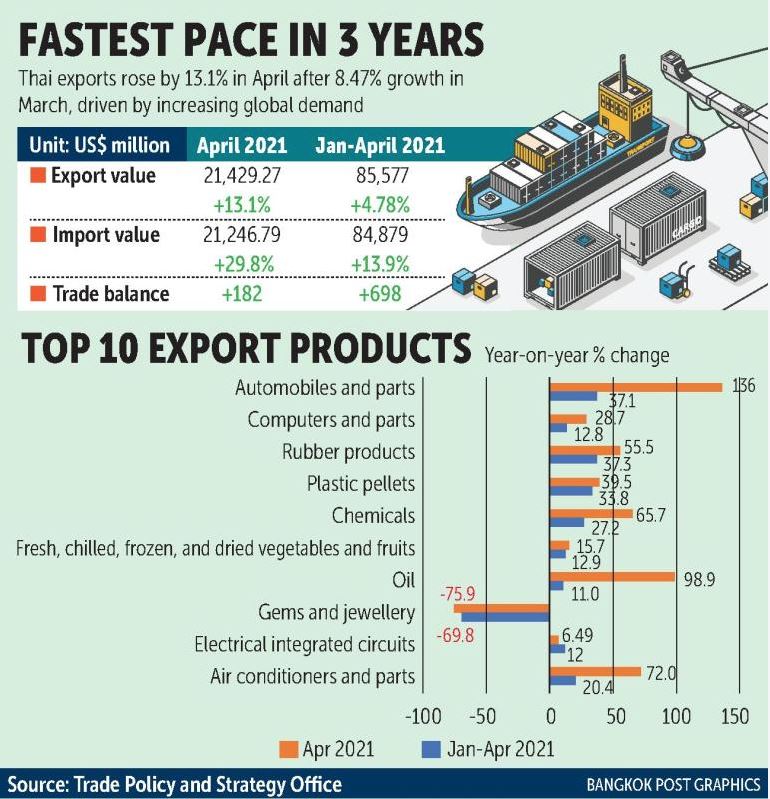 The Commerce Ministry reported on Tuesday exports rose for a second consecutive month, jumping by 13.1% year-on-year to $21.4 billion in April, after 8.47% growth in March and a 2.59% contraction in February.

Shipments in the real sector (excluding gold, oil-related products and weaponry) continued to soar with a 25.7% expansion in April after a 12% rise in March. Imports also increased by 29.8% last month to $21.3 billion, resulting in a trade surplus of $182 million.

Other gainers comprised: products related to work at home and home appliances such as computers, furniture and parts, air conditioners, microwave ovens, refrigerators and freezers, washing machines and parts, radio and TV receivers and parts, and cell phones and parts.

Covid-related products such as rubber gloves, medical equipment and parts also grew during the month.

Products related to manufacturing such as steel and parts, chemicals, plastic resins, and electronic circuit boards, as well as durable goods or luxury goods such as automobiles and parts, and gems and jewellery (excluding gold) also saw robust growth in April.

Industrial product exports grew for the second straight month, up 12.4% year-on-year to $16.6 billion.

Commerce Minister Jurin Laksanawisit said the uptick in overall exports was attributed to close cooperation between the ministry and the private sector through the Joint Public and Private Sector Consultative Committee on Commerce to eliminate export obstacles and speed up reopening of border trade checkpoints. This teamwork increased border trade volume and solved inland transport problems with important partners such as China and Vietnam, especially at Youyiguan and Dongxing border checkpoints, he said.

He ordered the International Trade Promotion, the Trade Negotiations and the Foreign Trade departments to carry on working with the private sector to open up new markets such as Russia and the Middle East.