Thai outbound tourism was considered to be a lucrative market with over 10 million trips recorded per year prior to the Covid-19 outbreak. (Photo: Seksan Rojjanametakul)

While local residents are feeling anxious over long-awaited vaccinations that the government has promised to roll out from next week, contrasting scenes have been seen in recent weeks as wealthy people have chosen not to wait but fly across the world to the US to get Covid-19 vaccines.

Last week, a controversial debate sprang up on social media when popular Thai travel vlogger known as "Mint -- I Roam Alone", who has 5 million subscribers, faced criticism for sharing her opinion that the one positive thing she has learned from Covid-19 is how much travel should be cherished now that the pandemic has shattered dreams of foreign trips for over a year.

It became a heated topic of discussion as she shared her thoughts about travel experiences in the pandemic era -- while residing in New York -- of the extra costs tourists have to pay for Covid-19 tests, having to wait almost a month to get two jabs, the increased costs of long-haul airfares and the requirement to stay in alternative state quarantine (ASQ) upon return.

Even though Thai outbound tourism was considered a lucrative market with over 10 million trips recorded per year prior to the outbreak, the pandemic has revealed that the real purchasing power was nothing but an illusion as income inequality becomes a bigger problem in the country.

"In the past, the outbound market was mainly driven by two groups -- the middle and upper- class. The size of the market may have been grandiose but expenditures were not high when compared with travellers from other countries," said Suthiphong Pheunphiphop, president at Thai Travel Agents Association (TTAA) -- a private body in charge of outbound tourism in Thailand. 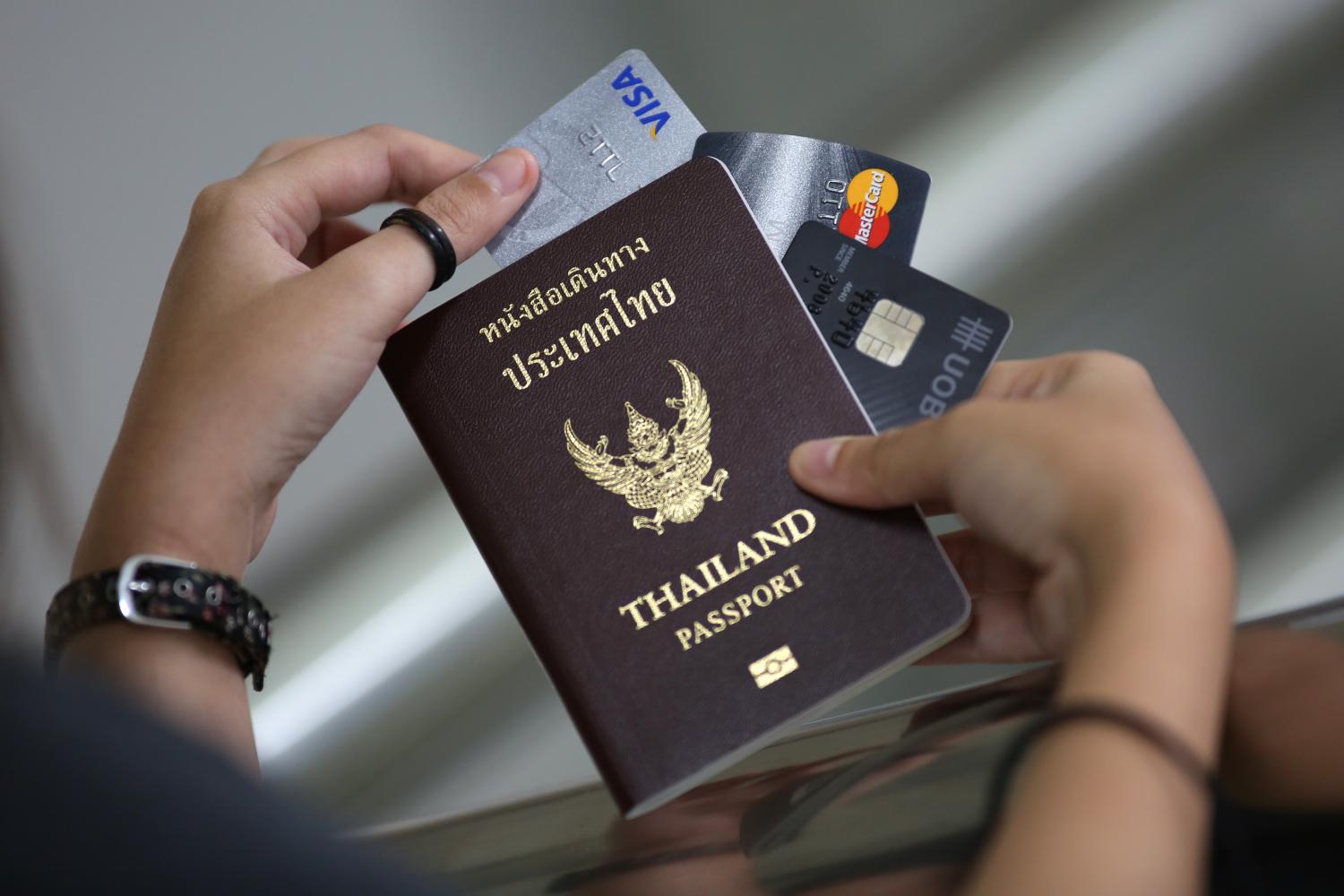 Thai Outbound tourism was considered as a lucrative market prior to the outbreak. (Photo: Pattanapong Hirunard)

He said 65% of Thai tourists travelled with tour companies and could afford to pay for outbound packages because of price distortions in the market. The cost of some of these packages was extraordinarily cheap as tour companies eagerly competed for headcount instead of profit.

"Being able to travel abroad did not mean Thai people were financially stable. They just received windfall from intense price wars. The arrival of the pandemic has revealed just how fragile this market is," said Mr Suthiphong. "Most people are struggling to survive, which has left only a small number of wealthy people that can afford to take expensive vaccination trips which cost at least 200,000 baht per person or up to 5-7 million baht for a whole family,"

Even though outbound tourism will be possible again from next year with countries gradually reopening borders without restrictions, the outbound market could see just 1 million trips, most of them from high-income individuals.

"Forget about overseas trips like in the past. The outbound market will not get back to normal before 2022" he said.

The low expenditure of the Thai outbound market has been proven by information from the Japan National Tourism Organization (JNTO).

Despite Japan being a top destination for Thai tourists in terms of spending of around US$1.37 billion (42.7 billion baht) in 2019, Thai tourists had a lower average expenditure when compared with other Southeast Asian countries.

"Expenditure of Thai tourists was below the average and the market will not likely come back soon because of travel restrictions. While waiting for future demand, we have to work with travel agents to boost premium packages and try to stimulate spending in the Thai market by targeting more specific groups," he said. 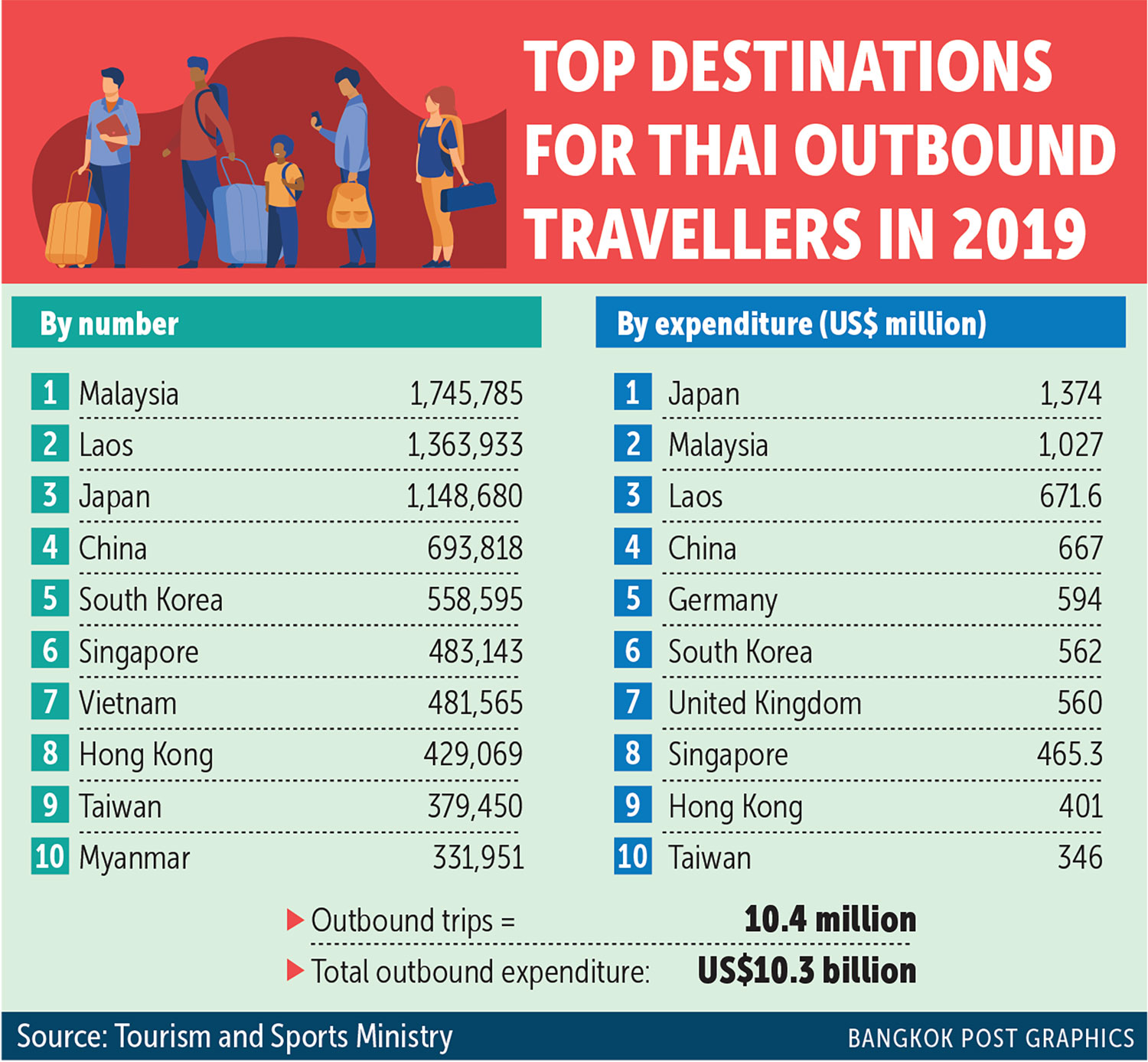 The problem of wealth inequality can also be seen in the domestic market as tour operators in the past year have returned to local packages to stay afloat as outbound activities have not resumed.

Unfortunately, not many of them can capture the local market as the only remaining segment with purchasing power is the high-end market.

Mr Suthiphong said premium tour packages in the country recorded good sales but the number was relatively small and could not save most tour companies from closure.

Moreover, tourists now prefer individual trips that they can manage themselves, which helped five-star hotels, due in part to a stimulus campaign from the government or hotel room subsidies.

However, many five-star hotels in beach destinations still had to close temporarily as there was insufficient demand to meet operational costs.

The low-income level of many Thais also made local trips in Thailand impossible as many routes require high transport costs, making it inconvenient to visit.

This situation is a stark contrast when compared with countries with healthy domestic tourism like Taiwan which the Tourism Authority of Thailand has set as the benchmark since it has an average trip count of five per year per person.

Taiwan has relative equality in income distribution as the Gini coefficient index showed the result last year was 33.9 points, around 0.6 percentage points lower than in 2009.

Watsamon Kosawiwat, a Thai blogger who also works in an application development company in Taipei, said prior to the pandemic, Taiwanese could spend more on domestic travel because public transportation is convenient and there are plenty of price options with punctual timetables and nationwide coverage.

"Besides a higher per capita income, Taiwanese take more domestic trips because public transportation can take them to almost every destination, even to mountains, unlike Thailand where most of the places are accessible via private cars only," she said.

She said Thailand has more striking nature and many locals tourists want to explore these destinations.

However, inconvenient infrastructure does not allow people with a low budget to take part and this gives only foreigners with higher incomes the chance to enjoy these places.

"A country with a stronger economy like Taiwan can hope for higher expenditures in travel but in Thailand where the working class still has to struggle to earn a basic income, it's hard to imagine a better scenario for tourism here," said Ms Watsamon.