CPI rises again in May
Business

CPI rises again in May

Inflation is 2.44% led by higher energy and food prices

The consumer price index (CPI), a gauge of headline inflation, rose for a second straight month in May, though the government insists the rate is still manageable and is expected to decelerate later in the year in part because of state subsidy measures. 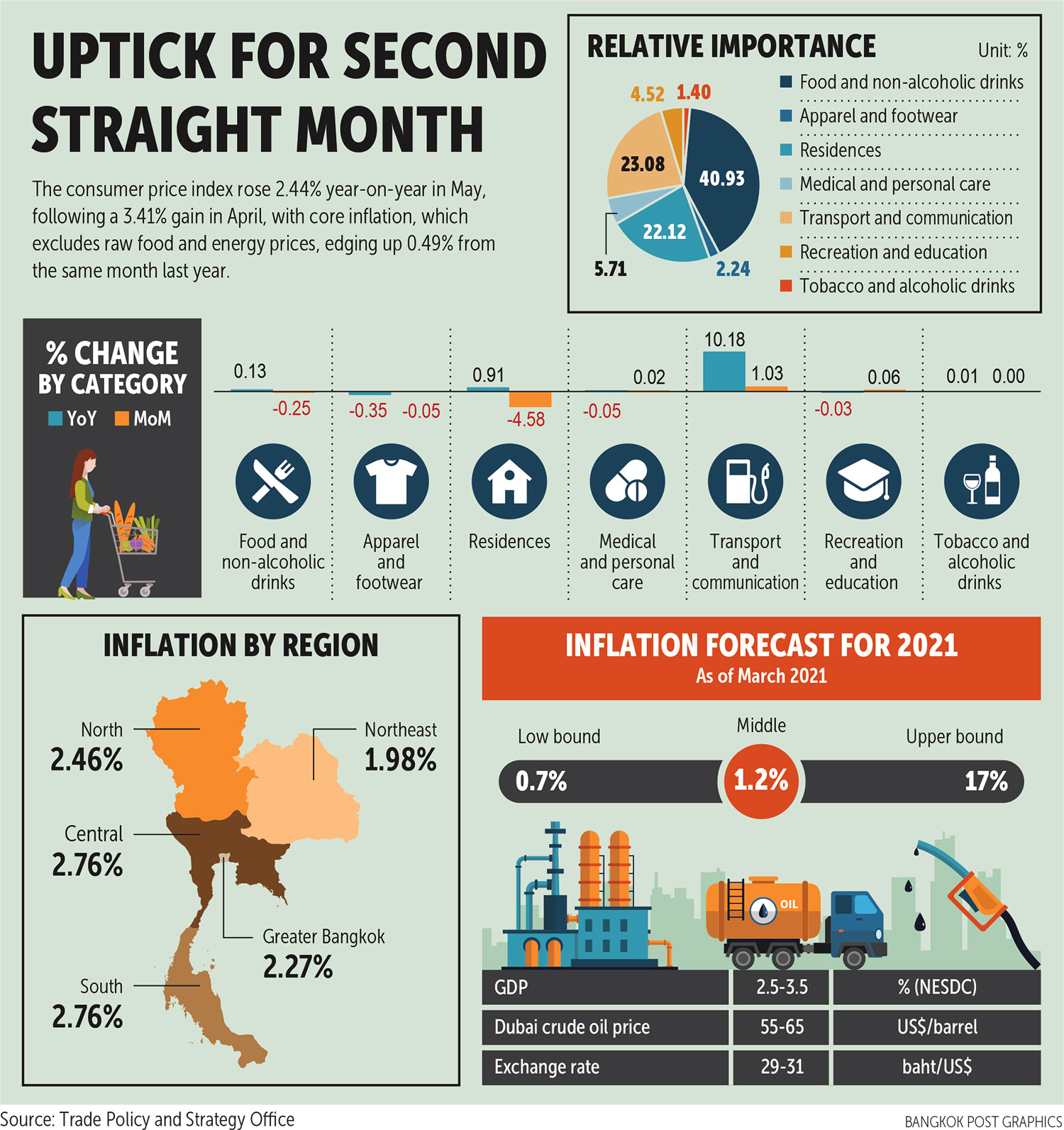 The Commerce Ministry reported yesterday inflation was 2.44% in May after tallying 3.41% in April, which was the first uptick since March 2020 and the highest jump in eight years, led by higher oil and food prices as well as the end of government subsidies on utility bills.

Wichanun Niwatjinda, deputy director-general of the Trade Policy and Strategy Office, attributed the rise to an increase in energy prices, as fuel prices gained 36.5%, while the cost of fresh foods such as pork, seafood, and fruit have been driven up by demand in the domestic and international markets.

Government measures helped slow the inflation rate, such as reduced power and water bills, as did lower prices for white and glutinous rice, chicken, and eggs and fresh vegetables.

"Inflation is primarily influenced by higher energy prices this year, while the fluctuating prices for fresh food will drive cyclical inflation. Periodic government measures are expected to help pull down inflation from rising too quickly," said Mr Wichanun said.

Core CPI, which excludes raw food and energy prices, rose 0.49% year-on-year in May, but fell by 0.11% month-on-month from April.

For the first five months this year, average headline inflation was 0.83% year-on-year and core inflation 0.23%.

He said headline CPI is expected to rise again in June, but at a slower pace because of state subsidies.

The CPI is expected to tally 2.3% year-on-year in the second quarter, before slowing to 1.59% in the third quarter and 1.35% in the fourth quarter due to energy prices and base effects. However, the pace may be lower than forecast if the government extends utility subsidies beyond June, said Mr Wichanun.

Thanavath Phonvichai, president of the University of the Thai Chamber of Commerce, said the higher inflation in May was driven largely by the supply side, with increased costs from higher oil prices and some fresh food items.

Higher headline and core inflation rates in May indicate a mild economic recovery, he said, in part due to inoculations and government stimulus.