Less than a century ago, most products in Asia were made mainly from natural materials, and were built to last or to biodegrade easily. People wrapped food in leaves or paper and carried it in reusable containers, returned glass milk bottles so that they could be sterilised and used again, and ate in restaurants using ceramic plates and stainless-steel cutlery. 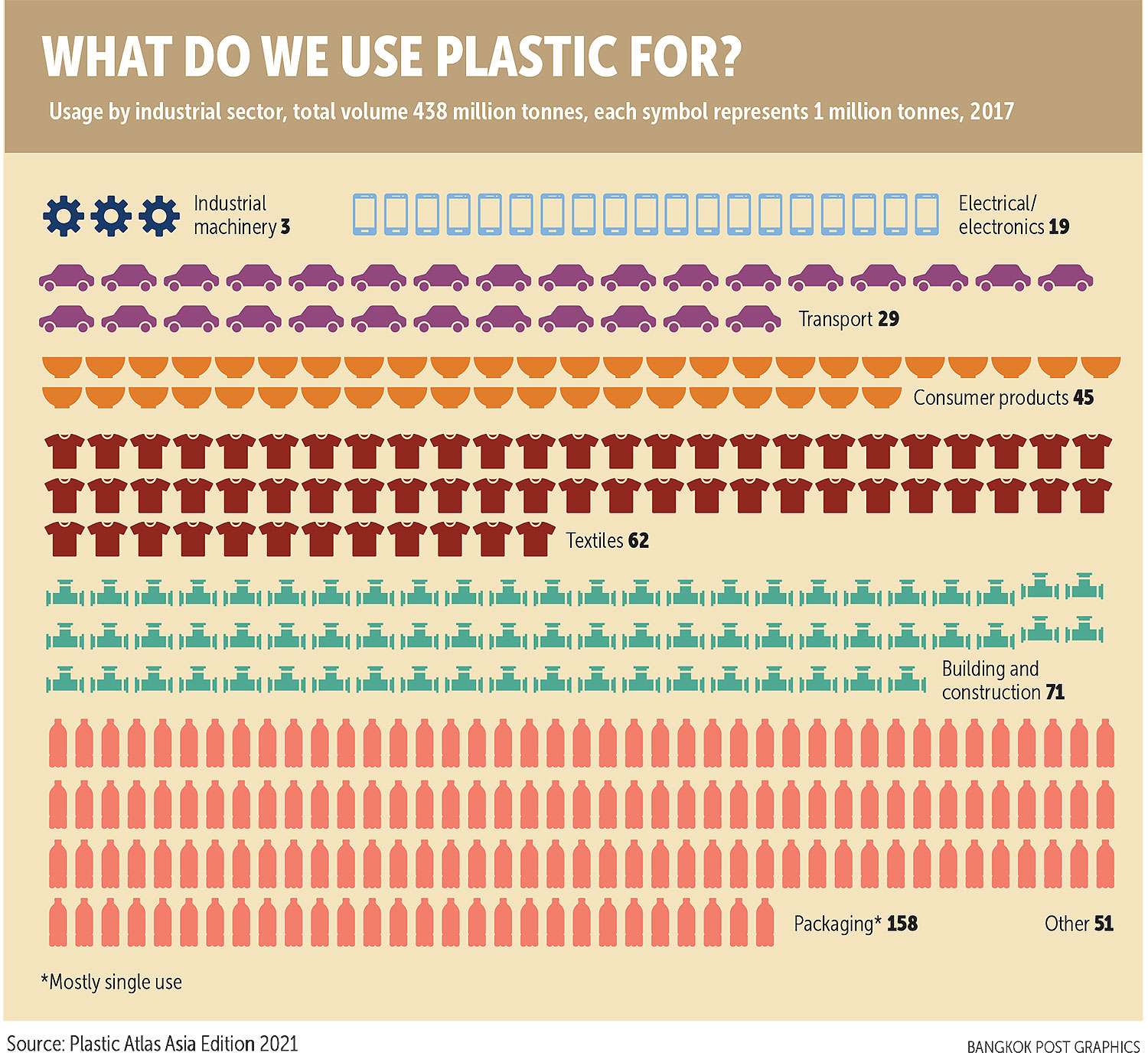 Low-income communities in particular embraced a prevalent micro-retail culture of buying small quantities of condiments and other household kitchen needs. The plastic bag had yet to be invented.

All this changed dramatically after World War II, when many parts of Asia underwent rapid industrialisation and urbanisation. The introduction of single-use plastics appealed to an ideal of convenience and hygiene, nurturing a mindset that ushered in disposability on an unprecedented scale.

Plastic has thus been the most popular and ubiquitous material in Asia for decades. More than half of the world's plastic is now produced here. But the increasing use of plastic is having adverse environmental effects that extend far beyond the vast quantities of it that litter land and clog bodies of water across the region.

To gauge the nature and scale of this pollution crisis and identify possible solutions, the Heinrich Böll Foundation and Break Free From Plastic Asia Pacific recently collaborated with the Institute for Global Environmental Strategies Japan to produce the Plastic Atlas Asia Edition.

The atlas includes facts and figures about the toxic world of synthetic polymers and shows how pervasive plastics have become in nearly all aspects of our lives, from clothing, food and tourism to human and environmental health. For example, we may not realise how much plastic we wear, in the form of polyester and other synthetic fibres made from petroleum or natural gas.

In fact, making a polyester shirt may emit between 3.8 and 7.1 kilogrammes of carbon dioxide. Plastic waste and microplastics in the oceans are a much-discussed problem. But few realise that plastic pollution of agricultural lands can be between four and 23 times higher.

The atlas provides comparative regional data as well, especially on grassroots issues such as illegal dumping of waste from more developed countries, the unequal gender impact of exposure to plastic, and the plight of waste pickers and workers who play a critical role in diverting plastic from open dumps, incinerators and the environment. It also outlines the responsibilities of governments and corporations in tackling the threat.

Although plastic pollution was bad before Covid-19, the pandemic has exacerbated the problem. Plastic production and pollution have accelerated as demand for single-use plastics -- including for merchandise and food delivery during lockdowns -- has surged.

This has jeopardised previous hard-fought gains, with the oil and gas industry planning to ramp up investments in production of plastic products and by-products -- more than 99% of which come from fossil-fuel feedstocks. As a result, the environment will likely become a long-term casualty of this public-health crisis.

But at the same time, a rising tide of grassroots-led initiatives across Asia could lead to the emergence of a more inclusive, sustainable and just economic system that can address the entire life cycle of plastic pollution.

Members of the #breakfreefromplastic movement believe that decentralised, community-led innovation represents the way forward in addressing the plastic pollution crisis. These groups have demonstrated how an approach involving ecological resource management and at-source use reduction can help to counter the growing environmental threat posed by plastics. The emphasis is on product redesign as well as systematic waste separation and collection.

In some cities, such as San Fernando in the Philippines and Kamikatsu in Japan, and in Kerala state in India, Break Free From Plastic member organisations are carrying out zero-waste management programmes that divert huge amounts of waste from landfills, thereby preventing it from polluting land and entering waterways.

Such initiatives have shown that the "solutions" being pushed by industry groups and corporations, including chemical recycling, plastics-to-roads, ecobricking, plastic credits and plastic collection in exchange of basic goods for low-income families, are merely greenwashing.

Their methods require ongoing extraction of resources, because they fail to keep valuable materials within a circular economy, and generate harmful emissions of heavy metals, organic pollutants and greenhouse gases.

Asian governments must now enact and properly enforce policies and regulations to help scale up grassroots initiatives and hold plastics producers accountable. The latter could include filing lawsuits and demanding remediation of pollution and its impact on health, human rights and the environment.

Companies urgently need to abandon their aggressive growth targets for plastic production and use, and offer credible alternative delivery systems and reusable packaging.

This year's Earth Day theme was "Restore Our Earth". To do that, we need to foster innovative ideas and solutions that can repair the world's ecosystems. With the publication of the Plastic Atlas Asia Edition, we hope to shine additional light on a complex crisis and spur further efforts to combat it.