While the price of older used jets has stabilized, modern wide-body models keep getting cheaper. This may force plane makers to discount more aggressively.

It is hard to compete against your own products. 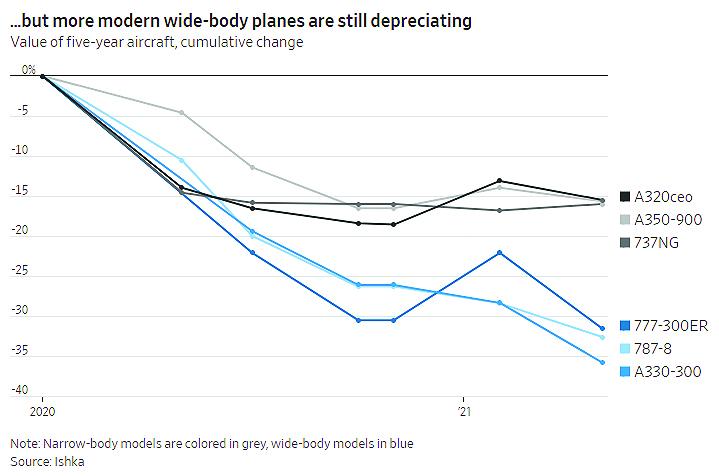 Vaccination campaigns are finally giving airlines the visibility they need to buy jets again. This is of particular relief to Boeing Co, which back in July had about 100 of its 737 MAX planes in storage without an owner. Now the number is only about 10, thanks to a wave of orders from major carriers like United Airlines and Alaska Airlines.

It confirms one of the cornerstones of aviation economics: There are always buyers of new, more efficient aircraft. With fuel accounting for a third of airlines' operating expenses, the cost of the latest jets is small compared with the savings they provide.

The question is at what price. Carriers' haste to purchase the MAX suggests that Boeing is offering generous discounts. Irish low-cost carrier Ryanair, which is known for scooping up cheap planes at moments of crisis, ordered 75 units last December.

The MAX's tarnished reputation gives Boeing a particular reason to prioritize sales over margins. But a broader factor also is at play, including for European manufacturer Airbus SE: It is extremely cheap to buy their planes -- particularly bigger models -- in the secondhand market.

The book values of planes often take between 12 and 24 months to fully reflect the impact of a crisis. The data suggest that these older planes, which have been the biggest victims of airlines' moves to shrink their fleets, have already found their footing in the used market, and may even be revalued higher from here.

When it comes to more modern wide-body planes, though, valuations haven't stopped falling. Aircraft investors still seem to be gloomy about international routes, which are more dependent on business travelers. Plane makers should be worried, because cheap used jets can pose heavy competition.

"Those conversations will become easier when long-haul travel eventually resumes in earnest, but that is still likely to take months, which adds further pressure on the [manufacturers]."

New airline startups like Britain's Flypop and Pragusa and Spain's World2Fly are opting to lease used Airbus A330s. At discounts of more than 35%, even a five-year-old plane from an unloved model series can offer superior economics.

Boeing has a big worry when it comes to the 787 Dreamliner, which has recently suffered from production problems. Only two were delivered in May, the company said last week, which means that around 100 remain in stockpile.

As it turns out, the 787 has also lost more than 30% of its secondhand value despite being a state-of-the-art, leaner wide-body plane. Its main competitor, the Airbus A350, is only down 15%.

The problem for profit margins at Boeing and Airbus is that, when it comes to aviation, few buyers have qualms about used-vehicle salesmen.