Though it would cause short-term pain for companies, controlling virus spread is the priority

Officials recently inspected a construction workers' camp on the outskirts of Bangkok where clusters of Covid-19 infections among migrant workers have been reported.

The Federation of Thai Industries (FTI) is disappointed with the government's decision not to lock down virus-hit Bangkok to curb high daily infection rates after it ordered a one-month shutdown for stricken construction camps.

The FTI raised doubts about whether the latest measure will be strong enough to stop the virus spread, following an announcement by the prime minister following a meeting of the Centre for Covid-19 Situation Administration.

Other business groups voiced concerns over the inability to control the third wave, which started in April.

Supant Mongkolsuthree, chairman of FTI, said he is afraid the new measure will not reduce the infection rate, leaving the situation unchanged. The only thing people can do now is take better care of themselves, he said.

"We have to admit closing the construction camps will not solve the problem at its root," said Mr Supant. "The most crucial effort at this moment is to speed up mass vaccination of the public."

However, given the reeling economy, he understands why the government made the choice not to lock down Bangkok.

"This is a critical situation with soaring daily cases and a hospital bed shortage for Covid patients in Bangkok. A strict lockdown is needed, similar to what was used during the first wave last year to help flatten the curve," said Chamnan Srisawat, president of the Tourism Council of Thailand.

He said tourism businesses have been suffering because every tourism activity, especially in Bangkok, is on hold indefinitely amid the new wave.

The government has to implement decisive lockdown procedures, using clear communication to contain the virus in order to have an effective result in the shortest time possible, said Mr Chamnan. 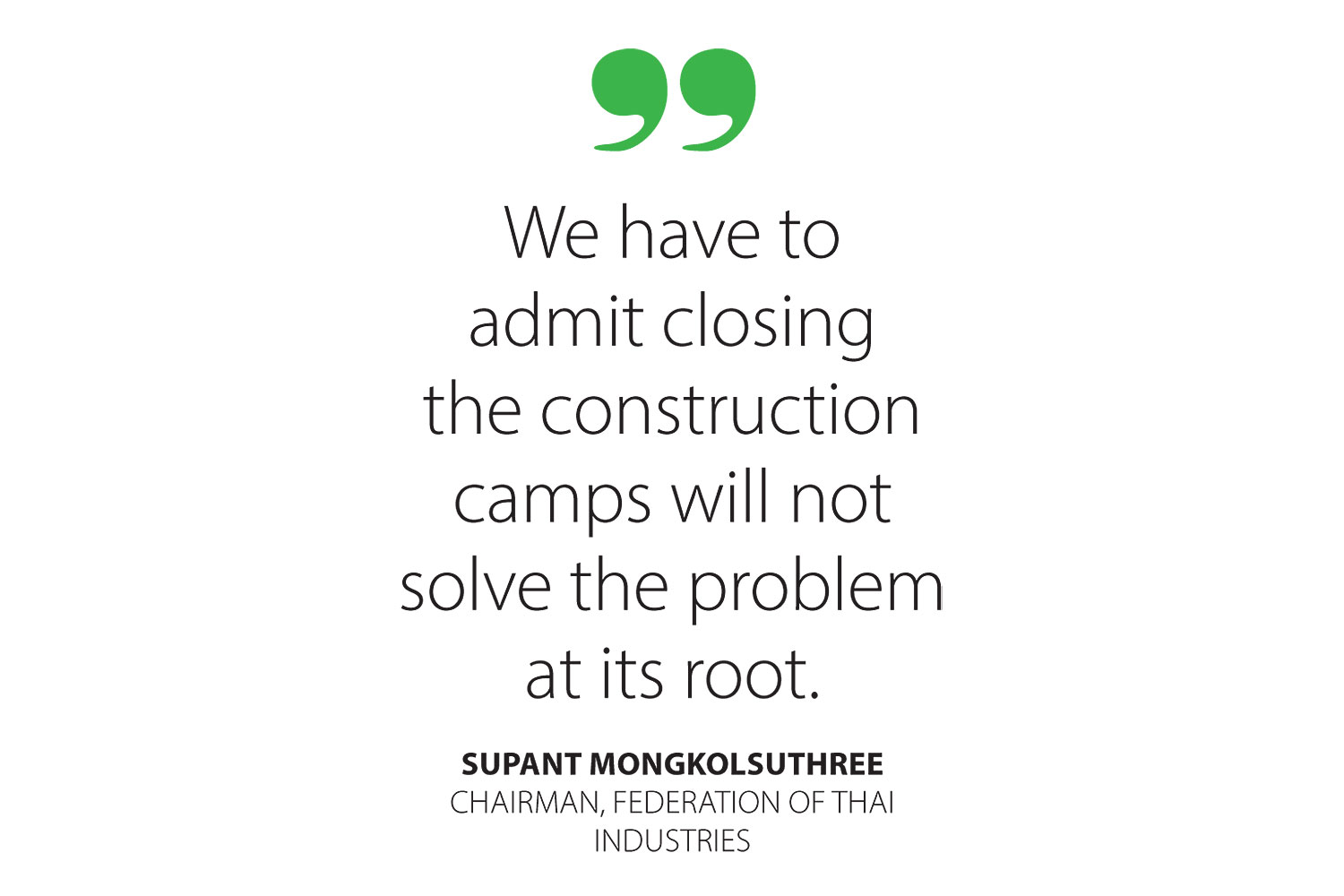 Mass vaccination needs to continue because that leads to positive momentum, while the government must be active in finding high-risk clusters at factories and construction camps, he said.

Mr Chamnan said operators affected by the closure order need to access financial aid, such as using the Social Security Fund to pay for 62% of a 15,000-baht monthly salary to make up for losses from the temporary suspension of economic activities.

The Employers' Confederation of Thai Trade and Industry (EconThai) wants the government to enforce a lockdown for all of Bangkok lasting seven days, believing it would be good for public health and the economy in the long term.

Tanit Sorat, vice-chairman of EconThai, said the government should listen to doctors and hospital personnel, who say they are unable to deal with rising infections.

"It's true a lockdown will cause further harm to the economy, but it will allow the government to get infections under control," he said.

Retail and services associations issued a joint statement that even a lockdown would not be enough.

An action plan to contain infections and remedy measures to help small businesses, such as water and power bill subsidies for three months, co-payment subsidies to retain staff and compensation for lost revenue from the outbreaks are desperately needed, said the associations.

"If lockdown measures have to be implemented to curb infections, the lockdown should be applied only to Bangkok and surrounding provinces," said the group.

"Some people in Bangkok are thinking about temporarily relocating to other provinces," he said.

"The prolonged third wave is more negative for the property sector than the first two waves last year. A lockdown would not have a great impact on the property market as it is already sluggish."

Therdsak Thaveeteeratham, executive vice-president of Asia Plus Securities, said uncertainty remains about whether the government will announce a Bangkok lockdown because it would deal a heavy blow to the economic recovery and may push workers to other provinces, worsening the spread in those areas.

Despite the great cost, if the government doesn't impose a lockdown now, the country's public health is at risk, he said.

Hospitals may not have enough beds to accommodate Covid patients. Failure to impose a lockdown now may delay the city fully reopening, said Mr Therdsak.

Delayed vaccine distribution is another factor limiting control of the pandemic. The government must expedite vaccine rollouts and inoculate the population as fast as possible, he said.

Mr Therdsak expects the investment climate next week to be negative because of growing concern that the increase of infections in Bangkok may affect the economic recovery.

The SET Index will likely decline to a support line of 1,550 points, he said.