A line in the sand
Business

A line in the sand

While many leaders applaud giving the country a timeline for reopening, some question whether Thailand is equipped

Yaksa statues at Suvarnabhumi airport are adorned with face masks to remind the public to remain vigilant during the pandemic. (Photo: Varuth Hirunyatheb)

The government's recent announcement of an ambitious plan to reopen the country by mid-October and curb household debt amid a battered economy has drawn mixed views from the business world, given the challenges ahead.

The plan to reopen Thailand holds the promise of more bustling economic activity, but it carries a fear the public health system could be overwhelmed if the country is unable to control virus outbreaks, according to the Federation of Thai Industries (FTI).

While the FTI welcomes the mid-October deadline because it sets a goal to achieve, the group is worried if the country reopens before it is ready it could risk more outbreaks.

The international standard for reopening seems to be after a majority of the population has received two doses of vaccine, said Kriengkrai Thiennukul, vice-chairman of FTI.

Given projected vaccine supplies in Thailand and the October deadline, it seems the Thai government plans to reopen the country after 70% of the population have received just one dose of Covid vaccine, said Mr Kriengkrai.

"Thailand is taking a big risk in that case," he said.

"We could reopen the country just to close it again because of a new outbreak."

The government previously announced a plan to provide 100 million Covid vaccine doses for 50 million people, or 70% of population, this year.

This implies the government would reopen the country after it achieves this target, said the FTI. But to meet its self-imposed mid-October deadline, the government must speed up vaccination to ensure 70% of the population receive two doses before the reopening, said Mr Kriengkrai.

Thai hospitals are equipped to administer roughly 400,000 doses a day.

The pace must increase to 800,000 shots a day, including second doses, he said, if the government wants to meet its deadline. 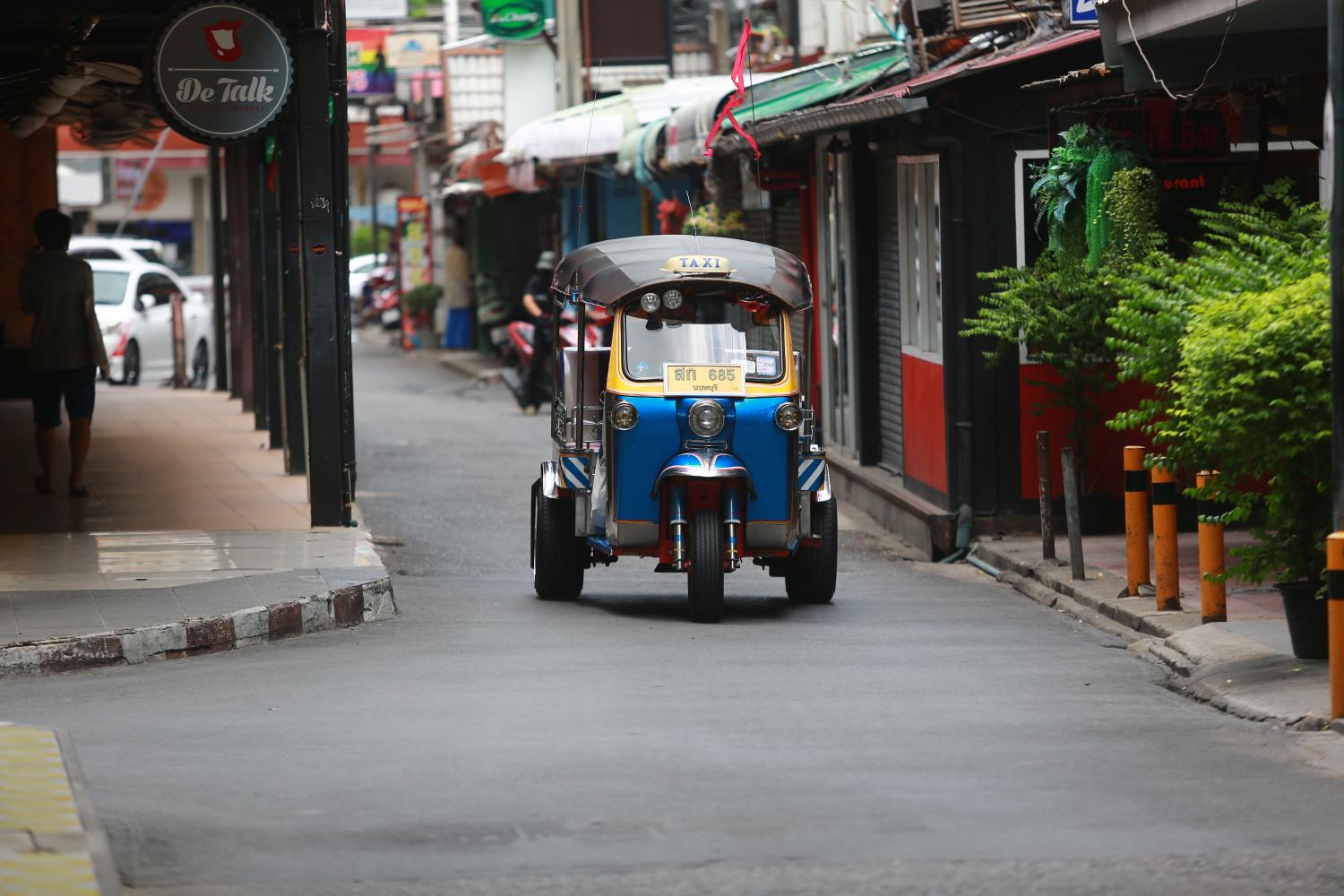 EVERYONE PLAYS A PART

Sanan Angubolkul, chairman of the Thai Chamber of Commerce, hailed the mid-October declaration, citing it as a bold move that will help build up the confidence of entrepreneurs and investors.

He predicted the reopening will draw foreign tourists back to the country and provide a boost to the country's economy, increasing growth by 0.3 percentage points this year.

Mr Sanan said the tourism sector should be able to resume operations and lure international tourists, resulting in spending worth 50-100 billion baht between October and December this year.

"Spending by foreign tourists will likely boost Thai economic growth by 0.3 percentage points to 0.8%-2.3% this year, up from 0.5%-2.0% projected by the Joint Standing Committee on Commerce, Industry, and Banking," he said.

"The reopening would help resuscitate the domestic economy faster as tourists no longer travel only on weekends because now they can work from anywhere."

Mr Sanan said the Thai economy is in a rehabilitation period.

"I think the most important thing is for us to have faith," he said. "Once the leader makes a decision, the private sector should push to build confidence in that choice."

If the Phuket tourism sandbox scheme scheduled to start on July 1 is a success, it will enhance the country's safety image, said Mr Sanan.

The return of foreign tourists will help generate income for businesses and create jobs for people in the third quarter.

"In contrast, if we do not reopen the country, Thailand will lose income and more businesses that are related to tourism will continue to suffer and lay off workers," said Mr Sanan.

He said to meet the premier's mid-October deadline to reopen the country, all sectors need to cooperate.

"The country's reopening plan belongs not just to the prime minister, but to everyone in Thailand," said Mr Sanan.

"It is everyone's duty to team up with one another to reach that goal."

The chamber is ready to work to achieve the reopening goal through vaccine distribution and communication with entrepreneurs, he said.

As the pandemic is expected to linger in Thailand for some time, the country should use this opportunity to restructure its economy so it is not as reliant on tourism, said Mr Sanan.

Somchai Pornratanacharoen, president of Thai Wholesale and Retail Trade Association, said he agreed with the government's reopening plan, hoping it leads to a faster rehabilitation of the economy.

"The number of Covid-19 infections is unlikely to change much whether the country reopens or stays closed. The most important factor is strict measures to contain the pandemic," Mr Somchai said.

He said one cause that could trigger a spike in infections is foreign workers.

Mr Somchai said he has yet to see the Labour Ministry tackle this problem. 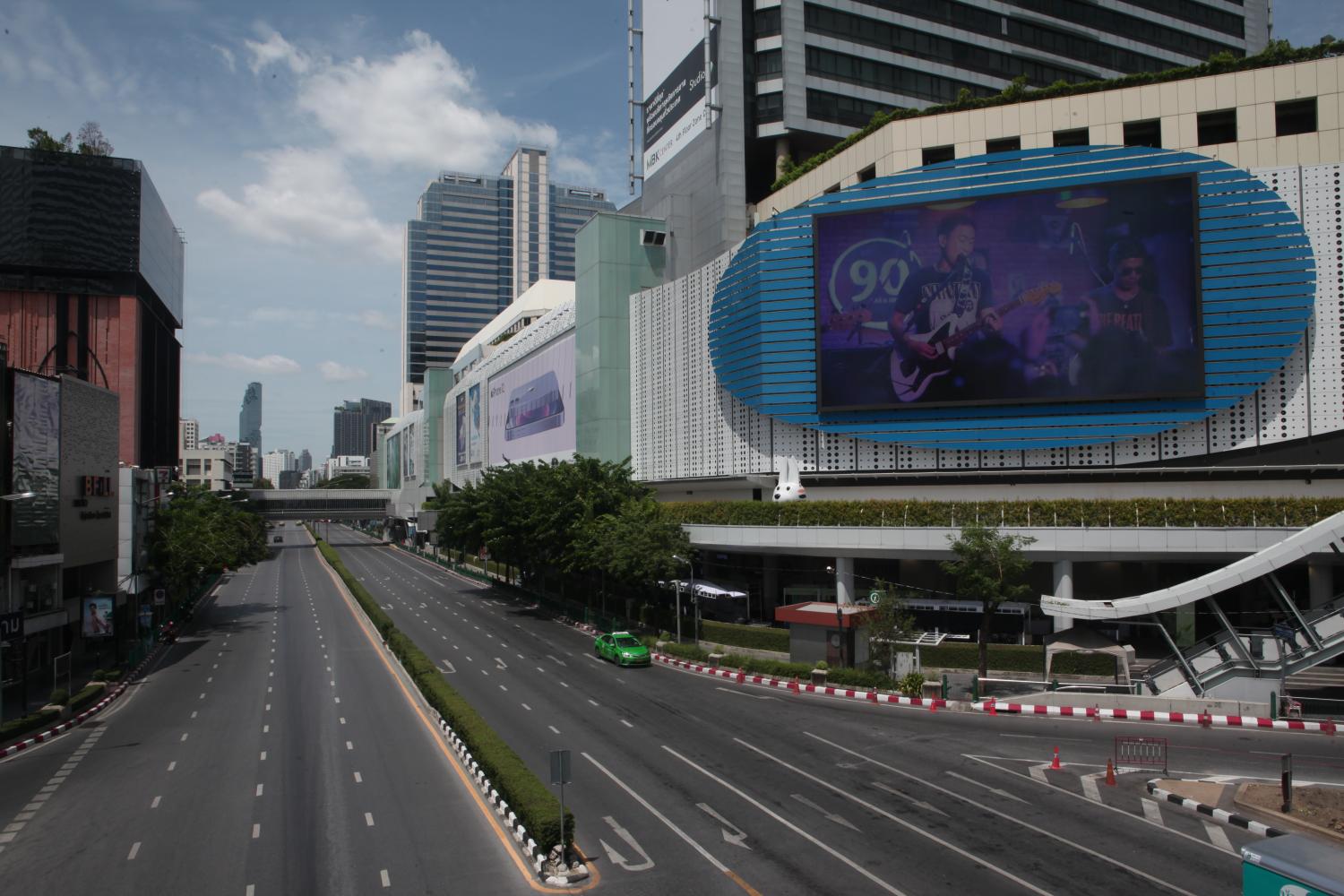 William Heinecke, founder and chairman of Minor International, said the most crucial part of any journey is the first step.

To reopen Thailand, that first step is the Phuket sandbox scheme for vaccinated arrivals.

Once the Phuket sandbox model proves successful, the concept and practices should be promptly implemented in other provinces eager to reopen to tourists, said Mr Heinecke.

He said a shortened quarantine period is not sufficient to revive tourism.

Nationwide quarantine-free entry is crucial to the success of the country's reopening to tourism, which should not be limited to specific sandbox areas, said Mr Heinecke.

Vaccinated tourists from safe countries have a lower risk of virus transmission and should be allowed to travel freely as long as they comply with the country's health and hygiene requirements.

"Any quarantine requirement will make Thailand uncompetitive against other tourism destinations that allow convenient and hassle-free entry," he said.

All national, provincial and local officials have to recognise the importance of the prime minister's declaration and work to make the reopening happen safely, said Mr Heinecke.

It is imperative the Phuket sandbox scheme launch as scheduled on July 1 because that is the date travellers expect, he said.

Mr Heinecke said the government should also consider easing entry requirements, particularly discontinuing the certificate of entry for all international arrivals, restrictions on movement and quarantine rules for minimum durations of stay.

He said if these entry rules can be eased before Oct 1, hoteliers can work to build bookings from traditional markets during the year-end holidays, which would serve as a stepping stone for a strong tourism rebound in the first quarter of 2022.

"Opening Phuket alone is not sufficient for a full-scale recovery of Thai tourism," Mr Heinecke said. 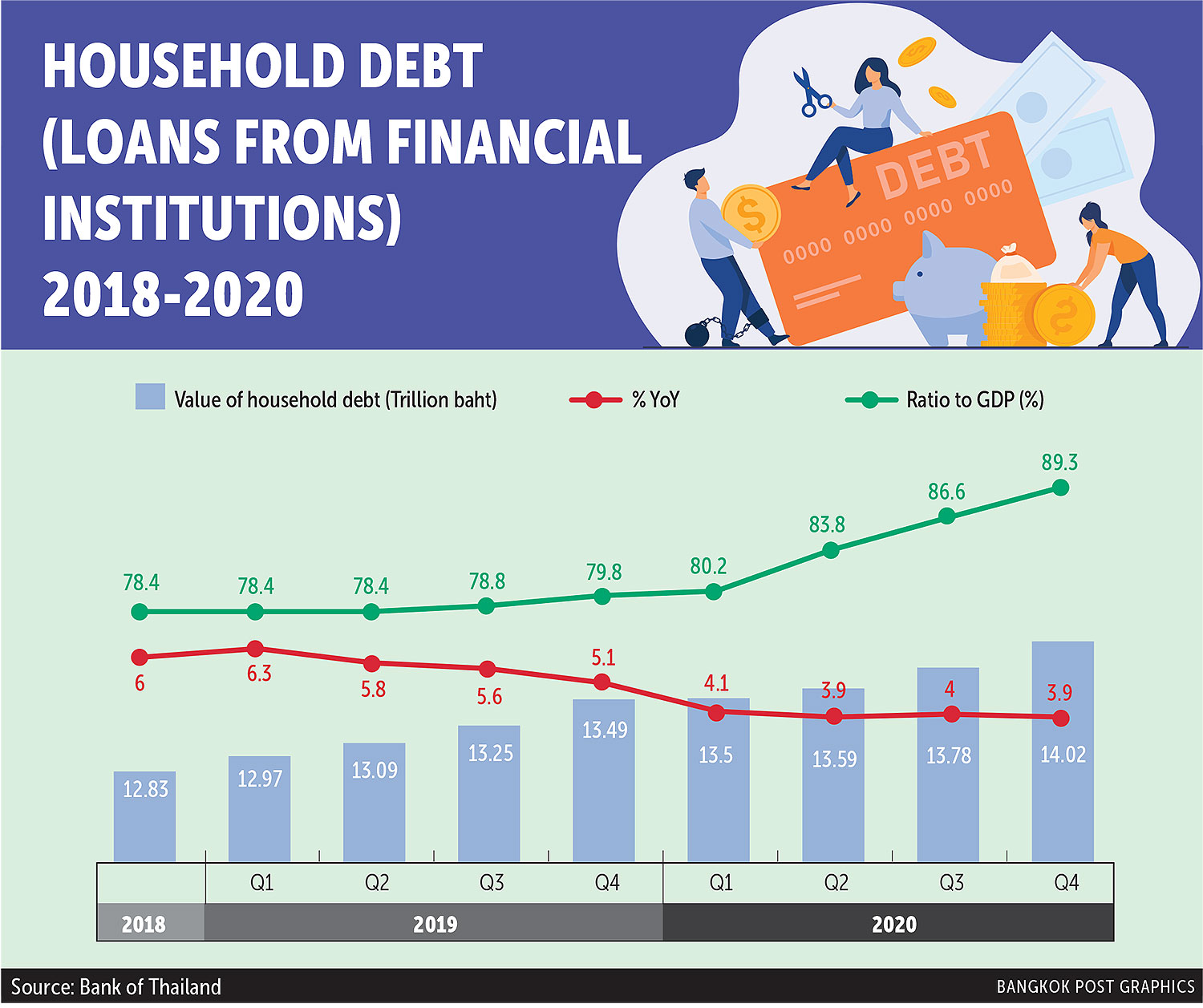 Adisak Sukumvitaya, chief executive of SET-listed Jay Mart, a holding firm focusing on technology and IT product distribution, said he agrees with the mid-October timeline as it provides an exact target for the country to drive towards and reflects the government's intention to tackle economic hardship.

However, current state mechanisms and capacity might not be up to the task, he said.

"There is good intention, but the government, led by the prime minister, should hurry to address all related elements before we approach his deadline," said Mr Adisak.

"The timeline of 120 days is counting down, but new infections are rising."

He said one critical factor hindering efforts to fight the spread of Covid-19 is illegal workers being smuggled across borders, which should be dealt with seriously, with punishment for the people involved.

Somchai Lertsutiwong, chief executive of Advanced Info Service, the country's biggest mobile operator by subscribers, said the reopening timeline is good because economic and healthcare elements can be addressed simultaneously before mid-October.

He said an action plan is needed to meet the deadline as the number of new infections is not decreasing.

Mr Somchai said two issues are paramount: a determined vaccination effort and methods to lower the rate of new infections.

"There is still doubt as to whether the government will impose a temporary lockdown for businesses in Bangkok," he said.

"If that happens, it must be in parallel with proper remedy measures for all affected sectors."

Somprawin Manprasert, head of Krungsri Research, a unit under Bank of Ayudhya, said the government could achieve its reopening targets, starting from the July 1 Phuket sandbox scheme.

Foreign tourist arrivals remain the critical challenge with the spread of the Delta variant worldwide, known to be more contagious than other iterations of the Covid-19 virus, he said.

Chinese and European tourists are the key targets for the Thai tourism sector after reopening, but China and the EU have been supporting domestic tourism rather than offshore travel, said Mr Somprawin.

Setting a reopening deadline is a positive because it puts the sector in preparation mode, he said. 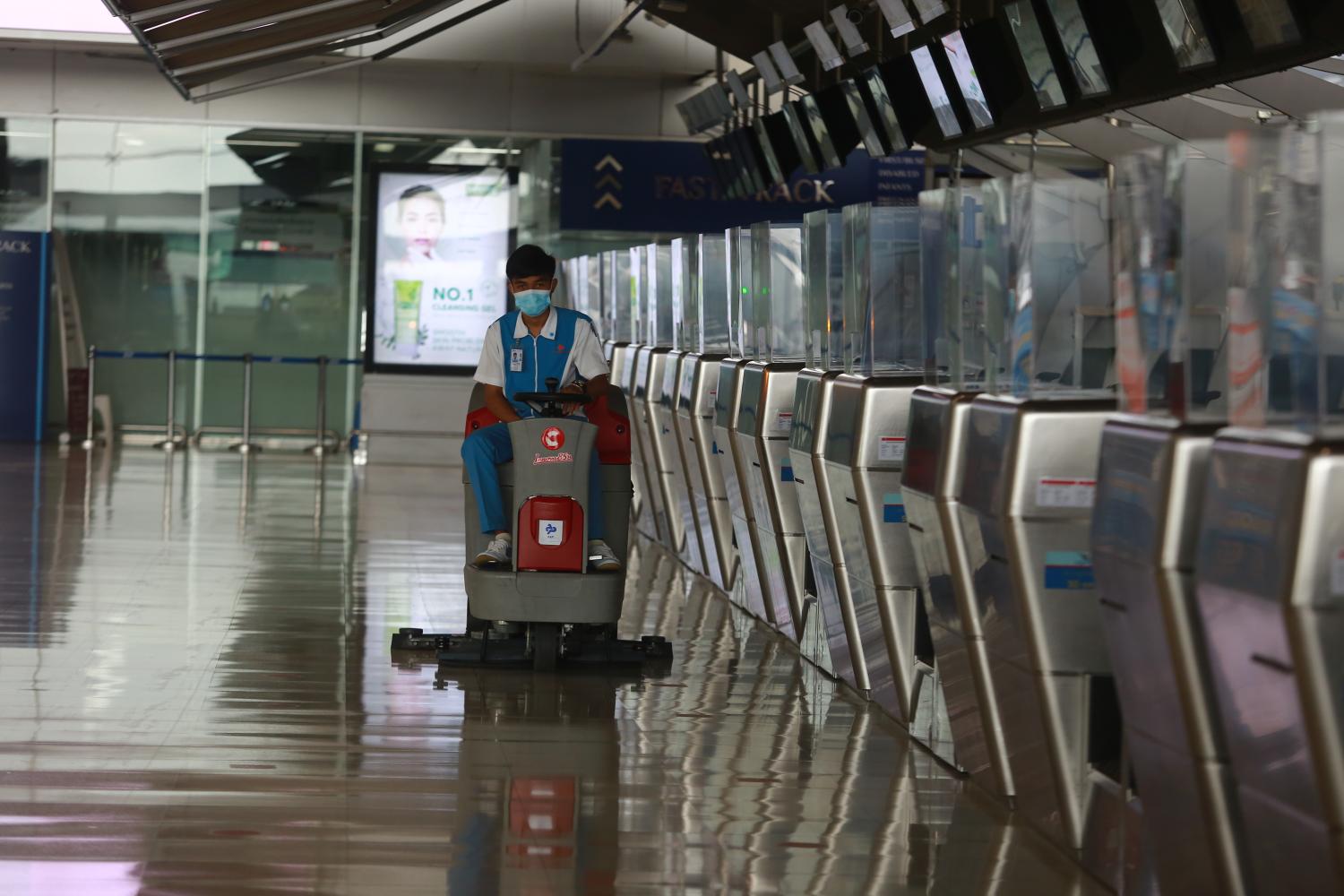 The atmosphere at Suvarnabhumi airport as airline check-in counters remain closed due to a restriction in international flights due to the Covid-19 pandemic. Somchai Poomlard

In addition to reopening the country, the government recently vowed to tackle household debt, which is expected remain elevated this year because of the impact of the pandemic on the economy.

The Finance Ministry plans to table before the cabinet this week measures to curb household debt.

A quick and even distribution of wealth to a majority of people would help bring down household debt, said Mr Nonarit.

To achieve this goal, Thailand needs to tally economic growth of more than 4%-5% per year, he said.

In addition, promoting financial literacy would help the population better plan how much money is needed in retirement, said Mr Nonarit.

Pipat Luengnaruemitchai, chief economist at Kiatnakin Phatra Financial Group Research, concurs with Mr Nonarit, noting the ceiling rate cuts for some consumer loan products, as mandated by the government, are not a sustainable solution for household debt.

If consumers are rejected based on stricter lending criteria, it may push some to opt for loan sharks that charge unreasonable interest rates, leading to higher household debt in informal financial system, he said.

Recently a central bank economist forecast the country's household debt was at a crossroads over the next four years, either rising to 92.8% of GDP or declining to 79.1%.

If Thai household debt grows at 1.2 times GDP, which is the average over the past five years, the figure will increase to 18.1 trillion baht or 92.8% of GDP by 2025, up from 14 trillion in 2020 or 89.3% of GDP, said Don Nakornthab, senior director of the financial stability department at the Bank of Thailand.

The central bank began a debt restructuring programme during the first wave of Covid-19 in March 2020.