The 50 richest Thais added US$28 billion (908 billion baht) in combined wealth over the last 15 months, with the Chearavanont brothers of Charoen Pokphand (CP) Group growing their wealth by almost $3 billion despite the pandemic, according to an annual tally by Forbes. 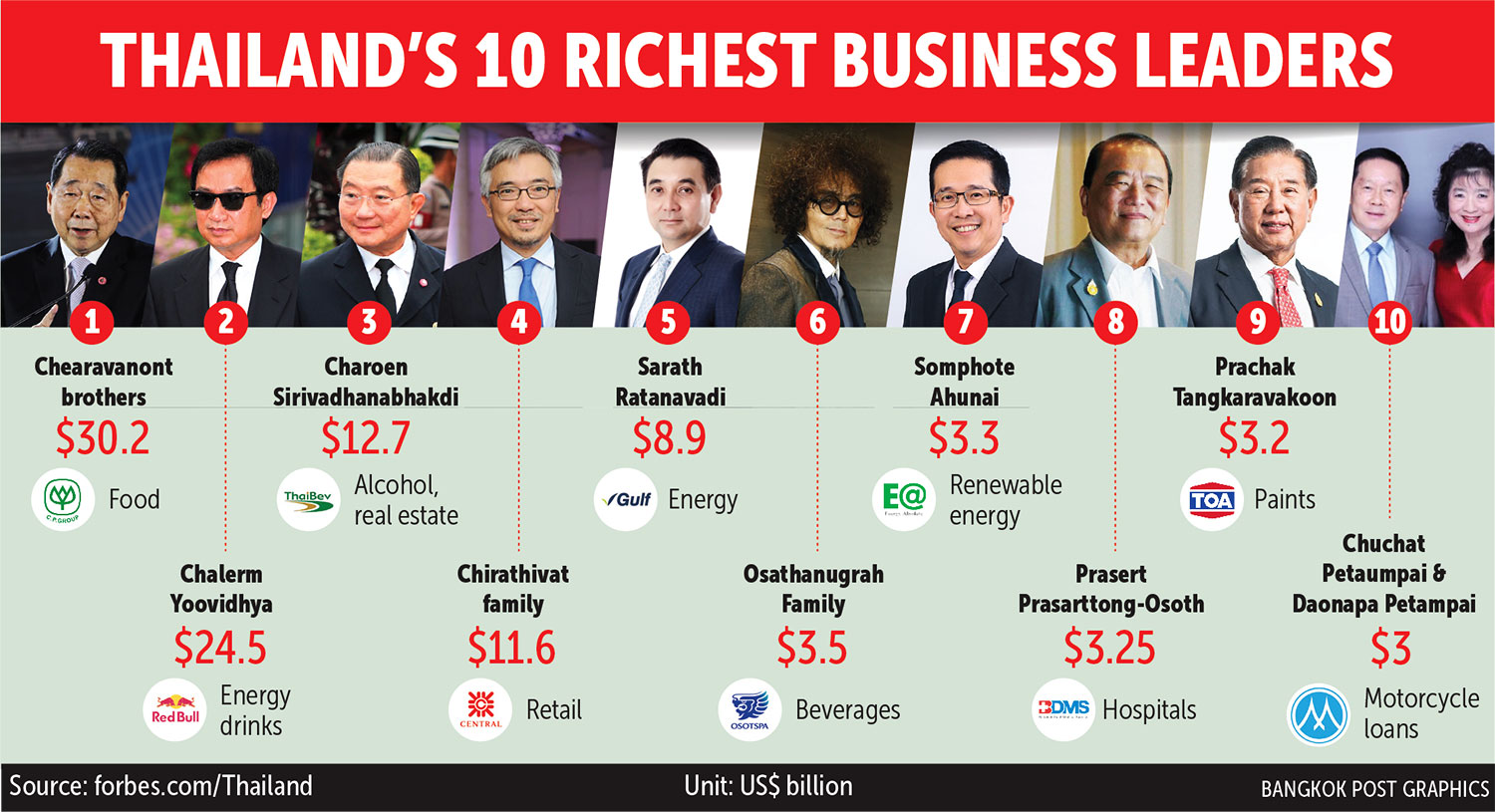 The benchmark rose 43% since the last measurement was conducted 15 months ago, driven primarily by the prospects of economic recovery and an uptick in exports. The total wealth of the top 50 stood at $160 billion.

At the top of the list, the Chearavanont brothers added almost $3 billion in net worth to $30.2 billion, up from $27.3 billion last year.

Chalerm Yoovidhya, who shares a $24.5-billion Red Bull fortune with his family, added $4.3 billion, the biggest increase of any Thai tycoon this year.

Charoen Sirivadhanabhakdi of Thai Beverage remained in third, with his fortune rising to $12.7 billion from $10.5 billion last year.

In fourth place was the Chirathivat family at $11.6 billion, whose fortune grew by $2.1 billion, followed by energy tycoon Sarath Ratanavadi, who made headlines in April with a $17 billion bid for InTouch Holdings and its wireless firm Advanced Info Service, Thailand's biggest mobile operator by revenue.

Mr Sarath's wealth was up by nearly a third to $8.9 billion.

Overall, 38 of the 50 listees saw wealth gains, including eight who added more than $1 billion each. Energy drinks magnates Sathien Setthasit (No.20, $1.9 billion) and Nutchamai Thanombooncharoen (No.28, $1.3 billion), co-founders of SET-listed Carabao Group, were the biggest percentage gainers this year after more than doubling their respective fortunes.

Chartsiri Sophonpanich (No.32, $1.15 billion), president of Bangkok Bank, saw his fortune, which he shares with his family, rise by $430 million from last year.

Mr Chartsiri, the third-generation head of Thailand's largest bank by assets, is featured on the cover of the latest issue of Forbes Asia.

The wealth of all five healthcare tycoons on the list was also up, including that of Pongsak Viddayakorn (No.43, $870 million), whose son Satit acquired a significant stake in Bumrungrad Hospital for close to $600 million.

There were three newcomers on this year's list, each hailing from a different sector. They include husband and wife Adisak and Nattaya Tangmitrphracha (No.29, $1.27 billion), who co-founded construction materials and home decor chain Dohome.

Three people returned to the list, including Bancha Ongkosit (No.35, $970 million), whose KCE Electronics, a maker of printed circuit boards mainly for the automotive sector, is benefiting from the electric vehicle boom.

Half a dozen listees saw their fortunes drop, notably King Power's Aiyawatt Srivaddhanaprabha (No.16, $2.15 billion), whose duty-free fortune, which he shares with his family, took a hit as travel froze.