Dip due to outbreak, slash in budgets

The worsening pandemic situation and plunge in advertising budgets are expected to drive down media spending this year with a 4% year-on-year contraction to 72.1 billion baht -- a critical situation for the industry, according to Media Intelligence (MI), a creative and media planning agency. 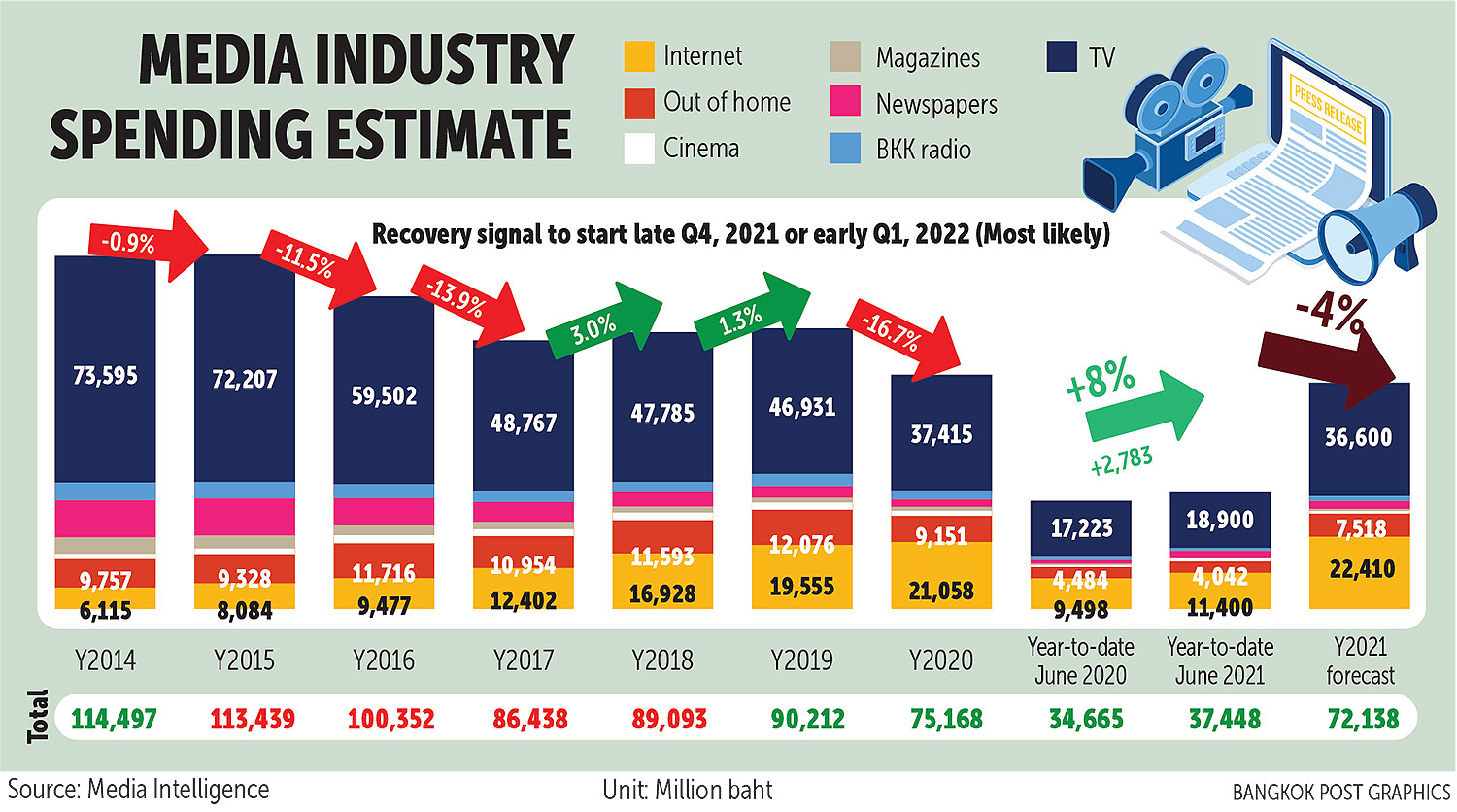 "The government's tough measure to curb Covid-19 infections and a decline in advertising budgets are likely to mark a new low for the country's media advertising," said Pawat Ruangdejworachai, chief executive of MI, at a news briefing.

In the first quarter, the company forecast 2021 media spending growth of 8%, but later slashed it to an increase of almost 1% in April following the third wave of the outbreak.

"We are in a coma situation throughout the media ecosystem which encompasses advertisers, media agencies, media and event marketers," he said.

"We think the situation could get better with signs of recovery either in the fourth quarter or early 2022," he said.

He said the majority of advertisers have postponed new campaigns and reduced spending budgets, except for global launches of new models of cars or motorcycles.

The Tokyo Olympic Games, which kick off later this week, is unlikely to help shore up sentiment as advertisers are concerned about the lack of purchasing power, he said.

In the third quarter, which is the low season, major ad spenders are consumer products, washing machines, e-marketplaces and food delivery platforms. The fourth quarter is normally the time for healthcare and cosmetic products.

In the worst-case scenario, various print media and digital TV channels, which are in the second or third tiers of ratings, are likely to disappear.

If recovery is on track in 2022, the media market is expected to bounce back with TV, out of home and the internet gaining the major share of the market.

According to Mr Pawat, the situation was gloomy in the second quarter and will continue to worsen in the third quarter.

Brands are tightening their budgets despite people spending more time with TV and online channels, he said, adding that advertising spending has not grown.

Mr Pawat urged the government to be more efficient in communication with clear measures. It must also seek the right remedy for affected people.

The Cabinet on Tuesday approved new borrowing of 1.34 trillion baht in the 2022 fiscal year starting in October, a government spokesperson said.