Markets at the tip of your fingers
Business

Markets at the tip of your fingers

Robowealth seeks to bring investment to the mass market through apps, with a focus on the younger generation

For Chonladet Khemarattana, chief executive officer and co-founder of Robowealth, a Thai wealth tech startup and mutual fund brokerage, it's always the small pieces that make the big picture.

He said the company was formed from two critical moments in his career.

The first was an Excel VBA file emailed to him by a senior colleague at the business development department of Siam Cement Group (SCG), suggesting he be open-minded and harvest experiences in programming and finance, which are his fields of interest.

Mr Chonladet, aged 23 at the time, was at a crossroads in his professional life, deciding whether to pursue the career path of his colleague and earn a master's degree under the company's scholarship, or take a chance and chase his dream.

Following the advice of his friend, he resigned from SCG to work with an investment development and risk management software developer for three years in the fintech sector, including labour on online trading through various brokers.

Mr Chonladet's inspiration for fintech grew during his time with the fledgling company, which nurtured his knowledge of online and algorithmic trading even before fintech startups began to proliferate in Thailand.

"When the term 'fintech' become known in Thailand in 2014, I told myself this is the right career path for me. Technology is the key to help the public access better investment services," he said.

Mr Chonladet believes technology can help all investors, not only the rich, access high-quality and curated investment products. This belief was affirmed by the second turning point in his career, when his customers asked two questions that reflected huge demand from the mass market seeking investment advisory services, which at the time were designed to serve only millionaires. 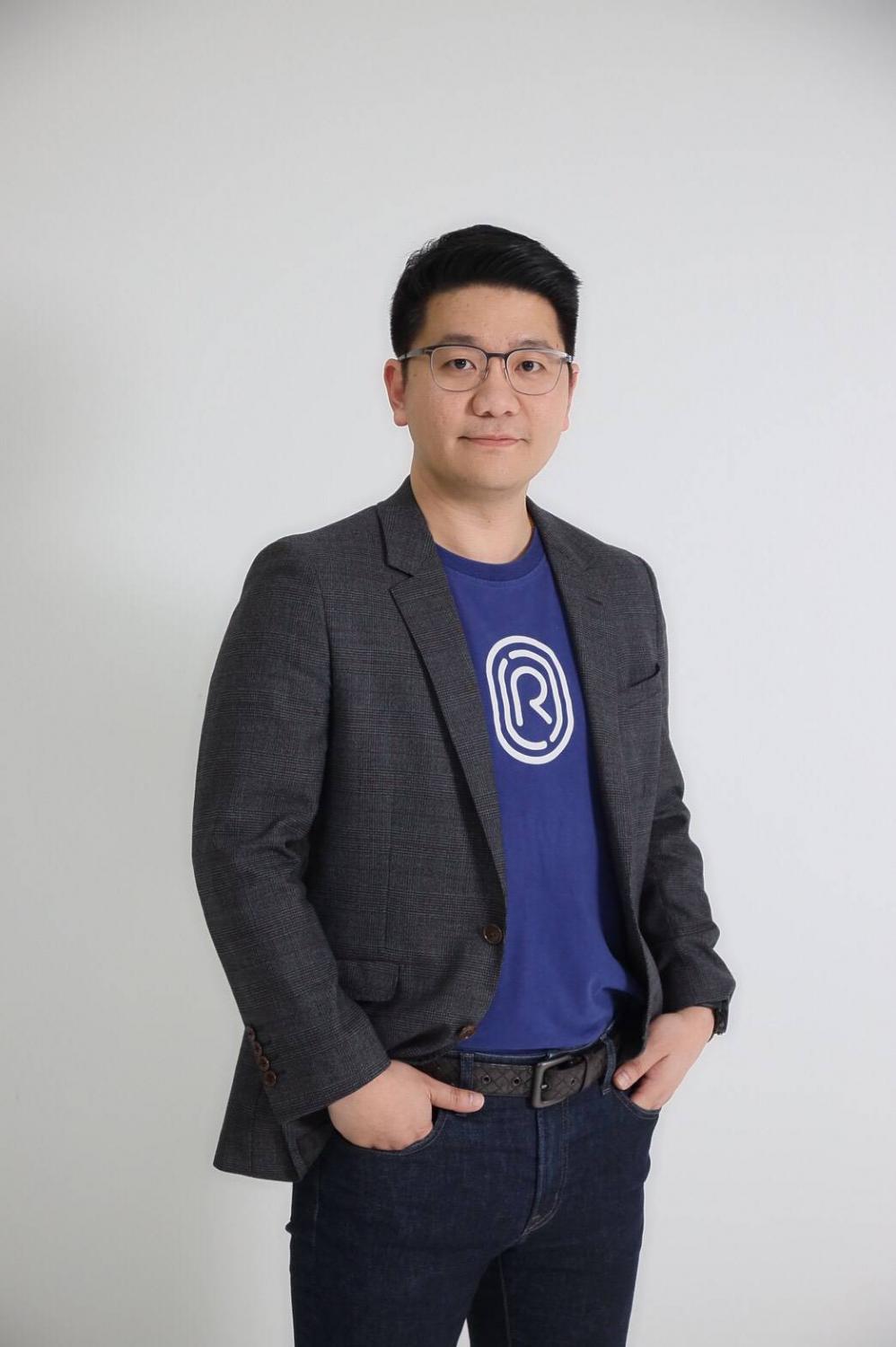 "I want to help, but the questions were hard to properly answer," said Mr Chonladet. "How can I tell them which stocks or mutual funds best suit their objectives when good stocks can turn bad in a short matter of time? What if I found a better mutual fund after the suggestion? It would be ideal if I can help them update their investment portfolios when the environment changes."

In his opinion, technology is the key to lower operating costs.

Mr Chonladet and two co-founders, Pasu Liptapanlop and Chaipakorn J. Kunapakorn, created Robowealth in 2017 with the goal of making Thailand's investment ecosystem more inclusive. The next year they launched Odini, a robo-adviser app for mutual funds with a minimum initial investment of 1,000 baht, designed for the mass market.

To use the app, customers are required to complete a survey to determine their risk preference, which suggests an investment plan to fit their risk profile. The investment and asset allocation can be diversified in accordance with their risk tolerance.

There are three well-known wealth tech startups in Thailand, including Robowealth.

While the market may be saturated for securities investment, Mr Chonladet said mutual funds remain an untapped market with huge growth potential as the investor base is less than 5% of the Thai population. 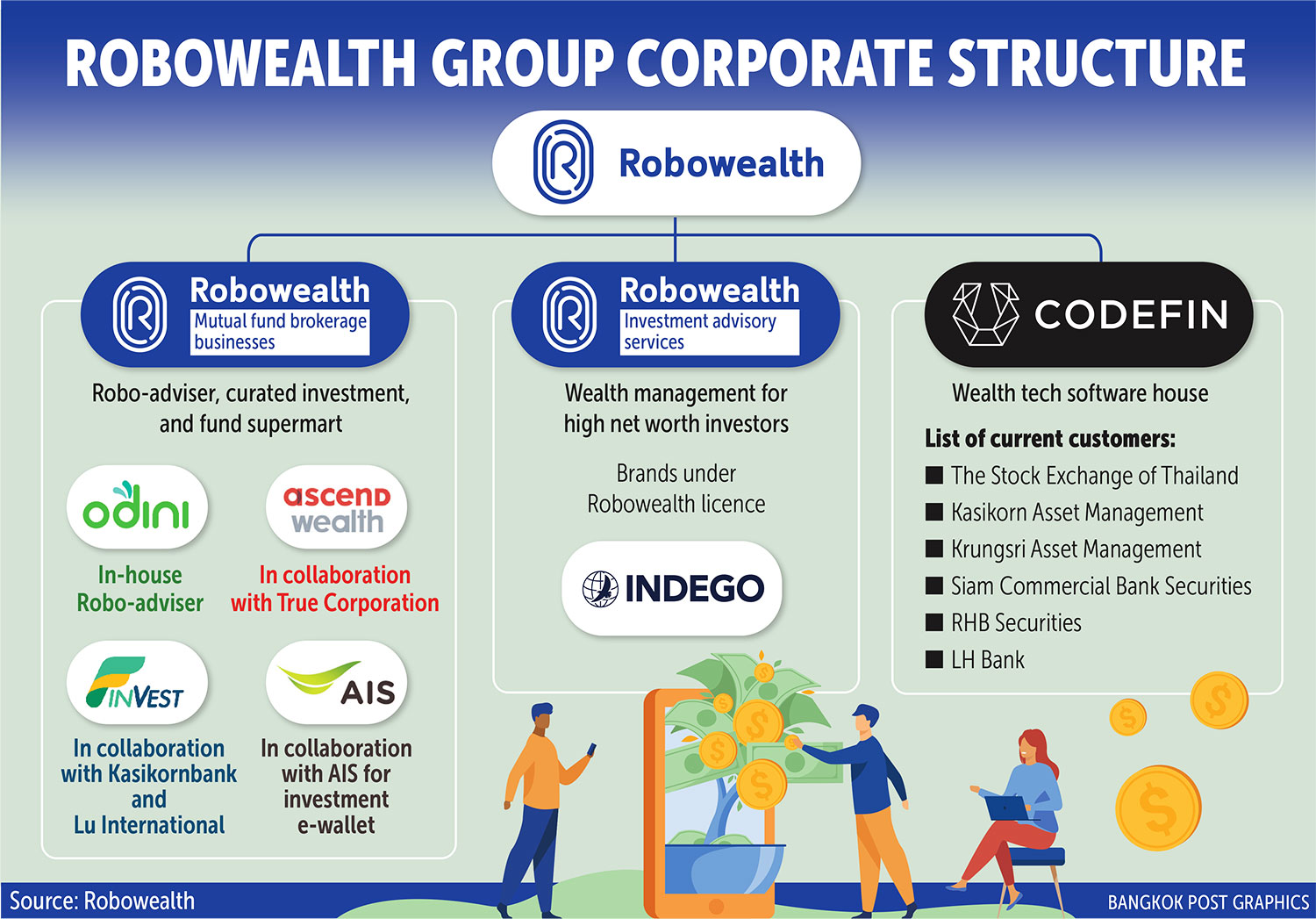 He said 10% of Thais are aged above 65, with the life expectancy at 78, which is significantly higher than the global average of 73. The country is becoming a so-called "ageing society" as people live longer, but Thais have less savings.

As of June this year, the value of the Thai mutual fund market is 5.3 trillion baht, comprising 2.3 trillion from fixed income funds, 1.7 trillion from equity funds, 0.8 trillion from real estate and infrastructure funds, and 0.5 trillion from mixed funds and others, according to data from the Association of Investment Management Companies.

"The mutual fund market has huge growth potential compared with other Thai financial assets. The total combined valuation of financial assets from Thai capital markets, comprising the Stock Exchange of Thailand (SET) and the Thai Bond Market Association, is 47 trillion baht, while the global financial markets are worth 9.6 quadrillion baht in total," said Mr Chonladet.

The proliferation of smartphones and daily online activities are crucial factors to support mutual fund businesses in the long term, he said.

About half of new accounts were opened online. Customers living outside Bangkok and its vicinities make up roughly 50% of total customers.

Moreover, more than 60% of new accounts are millennials or people aged below 35 years, Mr Chonladet said.

The influx of young investors from outside the capital is a result of the company's strategy to join hands with other market leaders with large customer bases.

Robowealth has three business pillars: mutual fund brokerage; trading platforms for corporate customers such as Finvest, which was established in collaboration with Kasikornbank (KBank) and Lu International, while a mutual fund tie-up with True Corporation is offered via Ascend Wealth; and an investment e-wallet service with Advanced Info Service.

Robowealth also provides an investment advisory service for high net worth customers. In addition, the company partnered with Codefin to provide wealth tech software development services to both governmental entities and private companies including the SET, Kasikorn Asset Management and Krungsri Asset Management.

The company's total assets under advisement (AUA) stand at 12-13 billion baht, he said.

With a flat organisational structure, Robowealth's decision-making is performed by an investment committee.

Robots and algorithms analyse big data and check all customers' portfolios once a month to determine if the asset allocation matches the customer's proportion previously customised by the system, said Mr Chonladet. It rebalances the portfolios if such a move is needed, he said.

If there is an inflow to the portfolio, robots automatically invest the amount in mutual funds that match the customer's investment plan and his or her capacity to tolerate risk, said Mr Chonladet.

"Staffing is a challenge for a wealth tech company as we need people who are experienced and knowledgeable in both program development, the financial markets and investment products," he said.

The company has about 140 employees, of which 10 are public relations managers and investment advisers, while more than half are tech workers specialising in financial engineering and front-end and back-end processes such as cloud capacity preparation.

"The management style of most small companies is still a flat organisational structure under the Chinese yin-yang philosophy of balance and the Japanese Ikigai philosophy that encourages employees to do what they are good at and build their skills from practice," said Mr Chonladet.

"When delegating a task to employees, managers must give some authority to workers, using balanced oversight as the company could face losses from undermanagement. I encourage my workers to be ambitious, but also humble. Confidence is fine, but not to the point of being rude and self-righteous."

He said the past three years were a pioneering phase for Robowealth as it received funding from major partners such as Beacon Venture Capital, an arm of KBank.

Next month the company plans to launch a service allowing customers to directly invest in foreign mutual funds.

The next three years are a "growing" phase for the company in terms of AUA, customer base, and business collaboration network, Mr Chonladet said.

The company's next milestone is expansion to other emerging markets, especially Indonesia and Vietnam, where there is a large amount of young adults, he said. Vietnam reportedly enjoyed the highest amount of foreign direct investment in the region last year, with a well-managed centralised economy under the government.