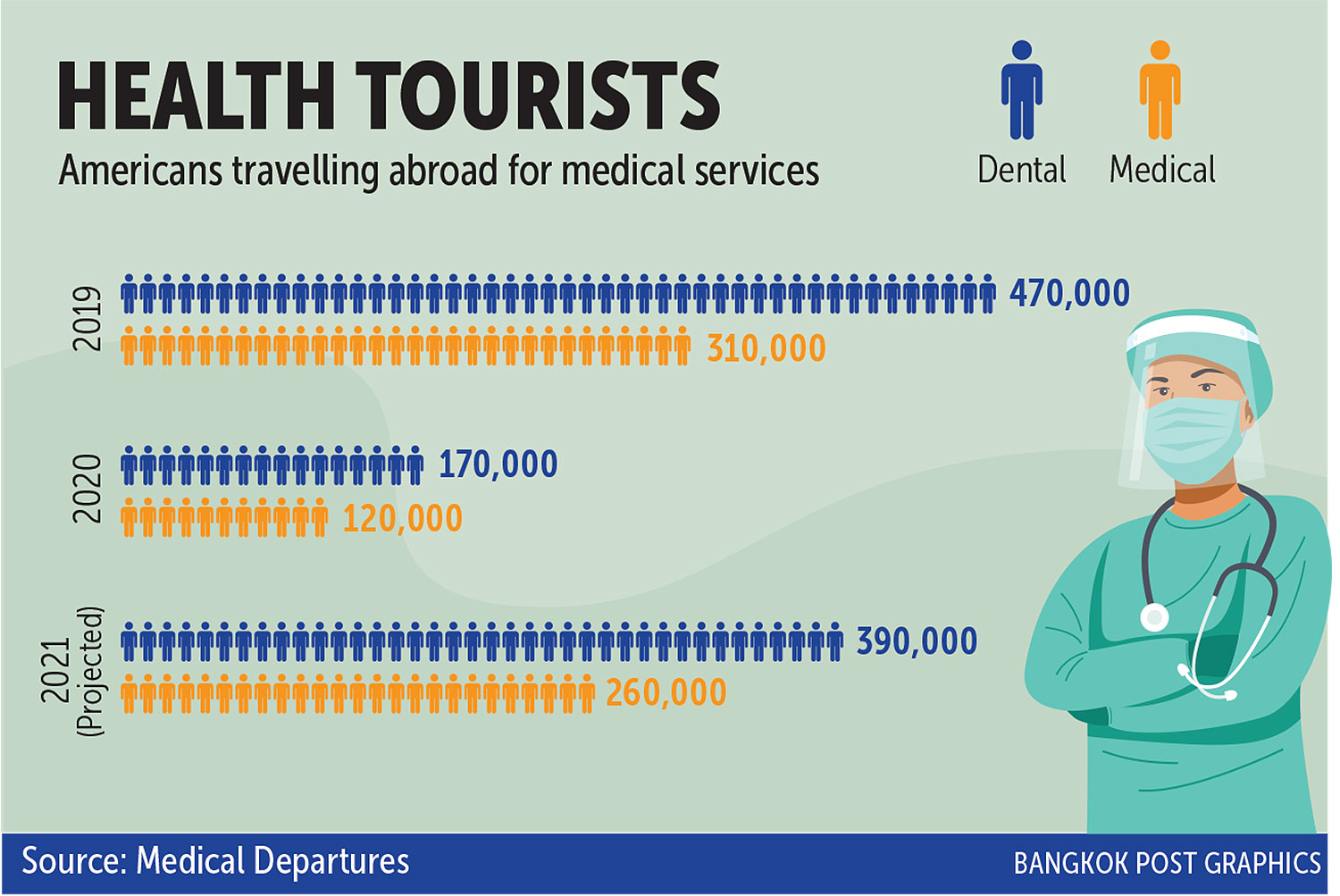 The conclusion was based on an analysis of data from Medical Departures, an "Expedia for medical travel", which showed that even during the pandemic, Americans continued to go abroad for care.

Medical travel has largely rebounded to pre-pandemic levels while spending has increased 20% to 50%, Medical Departures said.

And while nearby Mexico is overwhelmingly the destination of choice for dental treatment, Americans are willing to travel to Asia, mainly Thailand and the Philippines, for other medical services.

Bangkok is their favourite destination for cosmetic procedures such as botox/fillers, breast augmentation, hair transplants and rhinoplasty. The Thai capital also ranks first for bariatric and laser eye surgeries, and is second behind Tijuana, Mexico for in vitro fertilisation.

Like any travel-dependent industry, medical travel was deeply affected by the Covid pandemic. But the US outbound market for health tourism never shut down completely and is now experiencing a rebound, said Jacob Pope, chief operating officer of Medical Departures.

"Even in March last year the US market was still at about 5-10% of normal. We were still seeing activity in the drive-to-Mexico market," he said.

But Medical Departures has since enjoyed a large-scale recovery. "US traffic of patients at this point is roughly the same as it was before the pandemic," said Mr Pope. "And in dollar terms it's actually up by 20% to 50%, depending on who you ask. It's people who've deferred larger treatments."

Judging the size of the US outbound medical travel market is difficult. Experts cite figures ranging up to one million as the number of Americans travelling abroad for medical services each year.

Mr Pope says Medical Departures has a 15% share of total US outbound business and sends 100,000 or more Americans each year to Mexico alone.

One factor industry participants agree on is that medical travel is a growing, multibillion-dollar worldwide market. Some say the rate of growth is as much as 15-20% each year.

When many Americans think of medical travel, they might imagine pricey cosmetic surgery in an "exotic" destination like Bangkok. But for a growing number, medical travel means heading south of the border to Mexico for dental treatment.

"Most US outbound traffic today is border travel by car," said Josef Woodman, author of Patients Beyond Borders. "People feel safer and there are many repeat customers. Many have been going for years -- all the way from Texas to California."

The reason Americans seek dental treatment in Mexico boils down to cost and poor insurance coverage in the US.

"If you're an American, dental insurance has limited coverage and increasingly high copays," Mr Pope said.

Major medical treatments sought by Americans overseas tend to be pricey procedures such as in vitro fertilisation and orthopaedic surgery.

There are also specific markets for certain procedures that Americans pursue due to their connections with a given country.

"For example, India is a destination for heart surgery," said Mr Pope, "but mostly among people with a South Asian connection."

Whether people travel for dentistry, cosmetic or major medical procedures, they should keep in mind that most US health insurance will not cover procedures outside the country.

"Patients should balance their US costs against the total cost of overseas procedures and travel, and keep safety as their first priority," said HealthCare.com co-founder Jeff Smedsrud.

The pandemic may ultimately provide a shot in the arm to medical travel by sparking a surge in telehealth.

She notes that people will be able to use telehealth for consultations prior to scheduling procedures abroad.

"For a person who has no sense of where they're travelling to, it gives them a sense of connection with their caregiver," she said. "If you're seeking something complex, this allows you to get comfortable."

Experts agree that as long as medical treatments remain cheaper abroad than in the US and the quality good, the medical travel market will continue to grow.

But in the near future, medical travel's prospects depend on the pandemic.

"If vaccinations continue to increase and case counts go down, I expect continued growth," Mr Pope said. "But if a new variant spreads and vaccines aren't effective, then all bets are off."