The government is being urged to step up the introduction of more effective and intensive assistance measures to help maintain employment and create jobs for new graduates, as the fresh Covid-19 outbreak has had a drastic impact on workers. 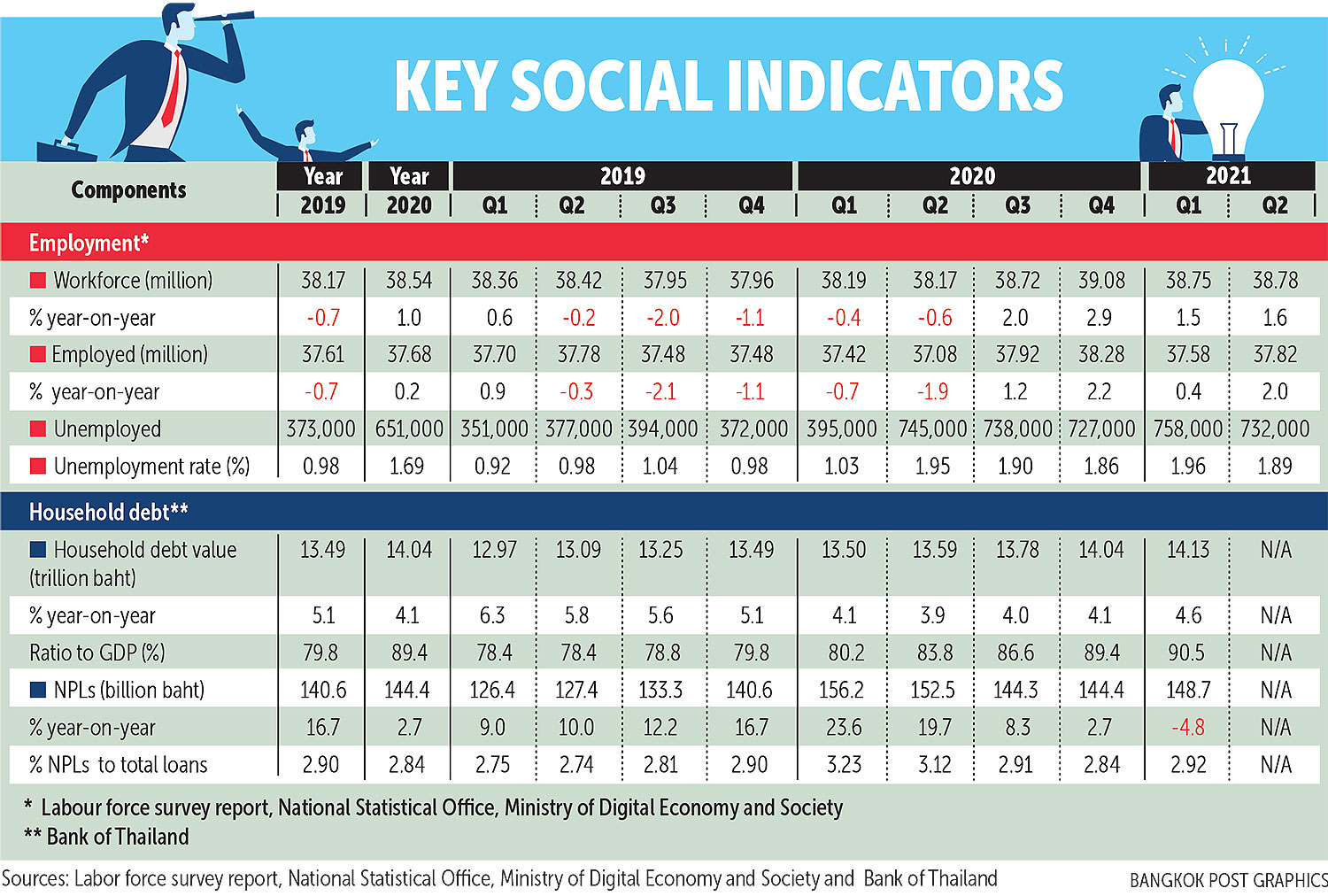 Danucha Pichayanan, secretary-general of the National Economic and Social Development Council (NESDC), said prolonged infections, the latest wave of cases and the government's strict measures to contain the contagion have had drastic effects on the income of workers and households.

According to Mr Danucha, the impact of the outbreak is more severe. Furthermore, outbreak control measures have an impact on workers' ability to earn an income.

The government announced measures to control the contagion in April in response to the new outbreak. As a result, economic activity has declined and is likely to decline further than it did in 2020, affecting employment and income, particularly among those unable to work from home.

"Only 5.5% of private sector employees, or 560,000 million out of 10.2 million, are able to work from home in the strictly-controlled 29 dark-red provinces. In addition, 7.3 million self-employed people are affected," he said.

The government desperately needs to issue additional measures to assist workers and entrepreneurs maintain employment and business operations. Workers as well are likely to become more vulnerable as the outbreak continues, he said.

"The government must implement more intensive assistance measures than in the past, such as helping to support wages for entrepreneurs to maintain employment and providing additional subsidies to self-employed workers who are unable to work normally due to outbreak control measures or must quarantine. This is partly to prevent displacement, which would make it impossible to effectively control the outbreak," he said.

Given the length of unemployment, it was found that jobless people tend to be unemployed for a longer period of time.

The number of people unemployed for more than 12 months was 147,000, an increase of 1.2 times from the same period of the previous quarter.

Moreover, the unemployment rate for vocational and university graduates rose to 3.18% and 3.44%, respectively, indicating that the current unemployment is in the highly skilled workforce.

In terms of unemployment in the formal sector, the number of people receiving unemployment benefit totalled 310,000, a slight decrease from the previous quarter but still higher than the normal situation.

The number of those covered by Section 33 who received unemployment benefits due to force majeure increased jumped from 7,964 in the previous quarter to 32,920.

The number of people in the workforce stood at 38.78 million in the second quarter of 2021, up by 1.6% from the same period in the previous year.

In a separate development, the Thai Chamber of Commerce (TCC) yesterday urged the government to allocate vaccines as fast as possible to all workers in the manufacturing sector, especially in the dark-red provinces to curb infections in the sector and prevent any impact on exports which are steadily recovering.

There are 11 million workers in the manufacturing sector, including 1.3 million registered foreign workers. Of the total, only 2.5 million workers have registered under Section 33 of the Social Security Act and all in nine provinces comprising Songkhla, Trang, Nakhon Si Thammarat, Surat Thani, Lop Buri, Saraburi, Nakhon Pathom, Nakhon Ratchasima and Bangkok have already had the vaccinations during June-August.