Tourism authority tests the water with rules for 7 destinations
Business

Tourism authority tests the water with rules for 7 destinations

Hua Hin is one of the places that can be considered quarantine-free destinations as the country is trying to open up more attractions for foreign tourists. (Bangkok Post photo)

For the upcoming tourism high season, which usually starts in early October, the country is likely to have five destinations taking part in reopening schemes and another two joining extension programmes.

Among those seven destinations, only Phuket has opened entirely to inoculated tourists, while the rest still restrict tourist routes to a few districts and mandate various conditions to maintain a health and safety balance.

Phuket and Hua Hin can be considered quarantine-free destinations as they don't require tourists to remain in their hotels, while Chiang Mai may insist on one day for quarantine, but all trips outside the hotel must be under the tour operator's arrangement. 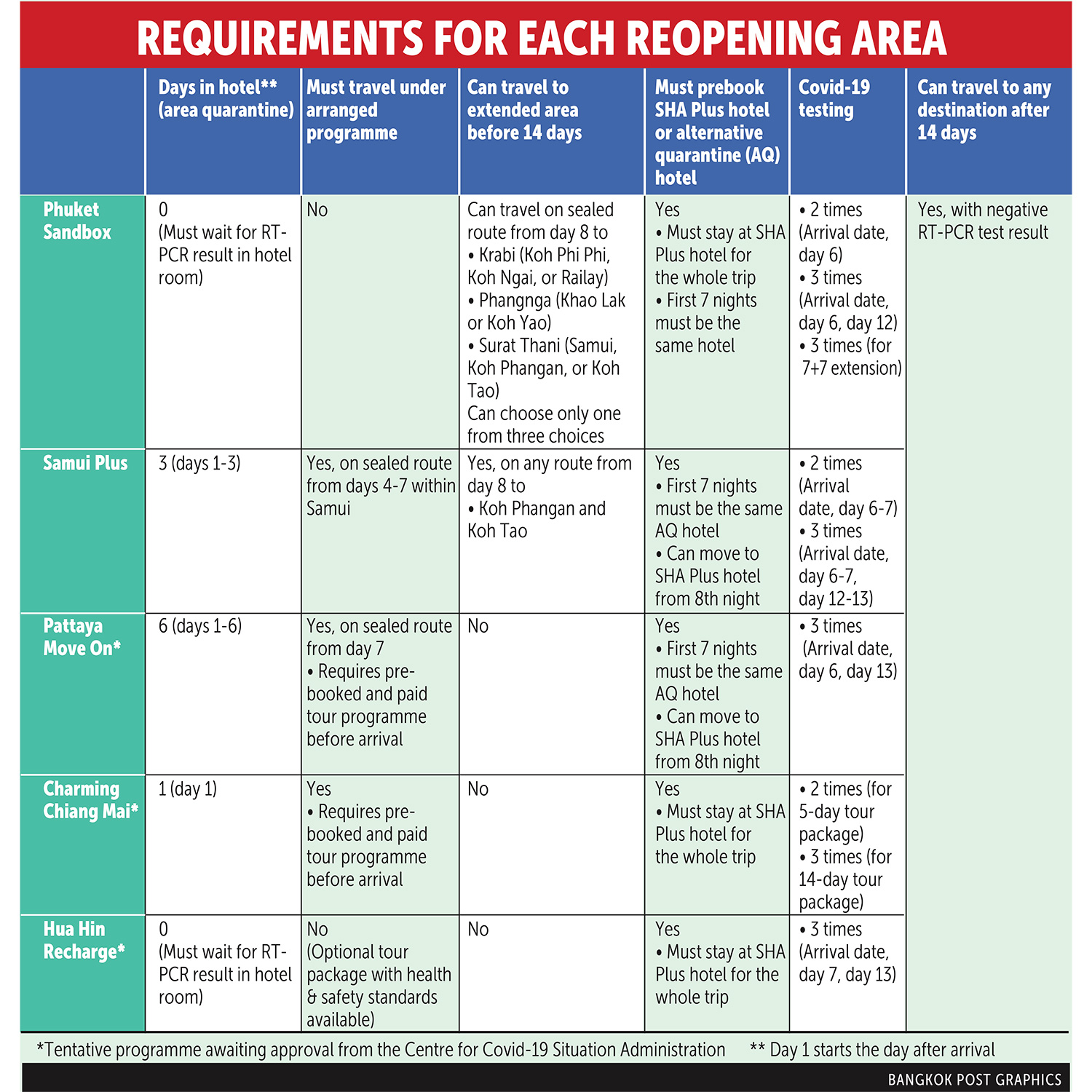 After testing the waters with Phuket and Samui in July, then Krabi and Phangnga as extended destinations in August, the Tourism Authority of Thailand (TAT) is poised to propose three more destinations in September -- Pattaya, Chiang Mai and Hua Hin -- to the Centre for Covid-19 Situation Administration (CCSA) to add to the reopening scheme.

Prior to the pandemic, international tourism receipts from Phuket, Pattaya, Chiang Mai, Samui and Hua Hin accounted for 50% of the total for the country, according to the TAT.

In the timeline previously proposed to CCSA, Chiang Mai and Pattaya planned to cut the ribbon in September, but a shortage of vaccines nationwide meant they had to wait at least one more month.

Even if new areas can be added in time for the high season, this scenario still falls short of the grandiose goal announced by Prime Minister Prayut Chan-o-cha in June to reopen the country by mid-October, embedded with the condition that no quarantine would be required for fully vaccinated tourists in reopened areas.

Krod Rojanastien, president of the Thai Spa Association and chief responsible for planning Hua Hin's reopening, said it will be difficult to lure international tourists as long as there are still mandatory quarantines or compulsory tour programmes. 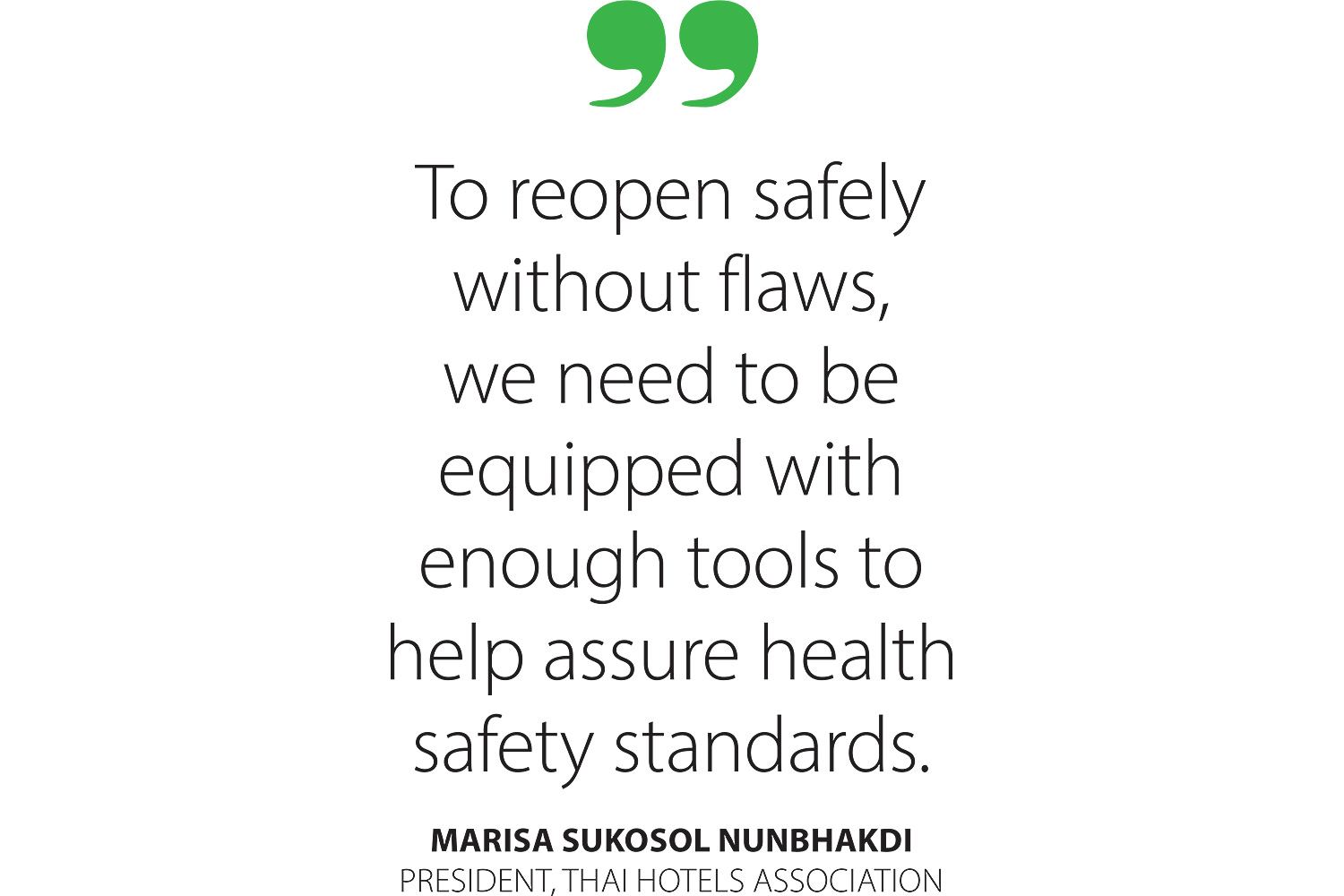 As a result, Hua Hin opted for a similar scheme to Phuket.

Instead of keeping tourists in quarantine, it plans to draw the zone within 86 kilometres of Hua Hin to let them travel freely, using surveillance technology for heath and safety checks and creating attractive optional packages to provide recreational choices during their stay.

After relying on the Phuket sandbox as the sole quarantine-free port of entry, the province itself and other extended areas started to feel the pinch this month as a decline in guests became obvious the past few days.

On Aug 26, there were 156 incoming visitors, below the average of 460 arrivals per day from July 1 to Aug 14, after the pandemic situation in Phuket and the entire country prompted many countries to raise the red flag against travel to Thailand.

The UK is the latest country to place Thailand on its red list, which means tourists are bound for self-paid hotel quarantine upon their return home.

The murder of a Swiss tourist in the Phuket sandbox and resulting media coverage is also attributed for the slower bookings.

With the US and the UK -- the top two markets since the beginning of the sandbox programme -- placing Thailand on their highest risk lists, reopening plans may not be enough to lure back tourists and restart the tourism engine.

"We have to roll back to a seven-day quarantine in October if Thailand still wants to effectively boost the tourism economy," said TAT governor Yuthasak Supasorn.

He said the slow bookings have made tourism operators pin their hopes on the fourth quarter instead.

The CCSA endorsed a seven-day quarantine on March 19 before the abrupt resurgence of the pandemic forced the country to increase the length of to 14 days.

"When the Covid-19 infection rate slows, if we can also speed up the vaccine rollout and push the fatality rate to below 100 per day, the TAT will propose a shorter quarantine to the CCSA," said Mr Yuthasak.

"A quarantine-free programme for fully vaccinated tourists from low-risk countries is also possible if public consensus is not against the idea."

Marisa Sukosol Nunbhakdi, president of the Thai Hotels Association, said the real push for the tourism sector will happen once mandatory quarantine for low-risk countries is totally removed.

"A seven-day quarantine will not stimulate demand, particularly for the short-haul market," said Mrs Marisa.

"What we need is risk management, using a screening process instead of keeping all of them in isolation."

She said this selective method is feasible if the country can administer vaccines to more people by the end of this year.

"We see more promising signs if additional vaccines are delivered from next month," said Mrs Marisa.

"When the local community secures strong protection, further relaxation of restrictions on travel should be put in place to help hotel businesses survive the year-long crisis."

She encouraged the government to prioritise tourism workers in sandbox areas as many places are still waiting for a vaccine allotment.

In Chiang Mai, only 30% of hotel employees are vaccinated.

"To reopen safely without flaws, we need to be equipped with enough tools, such as vaccines and antigen test kits, to help assure health safety standards once we can welcome international tourists again," said Mrs Marisa.