Ms Nithinan says AI allows NextPlay to quickly create animations without requiring a team of animators to develop each one individually.

Thai digital advertising company NextPlay Technologies has made a number of big-money acquisitions this year in a bid to integrate payments and artificial intelligence (AI) into its existing in-game advertising system, its chief executive said.

NextPlay is the recently established parent company of the Thai video game advertising company HotPlay, which inserts ads and coupon codes into gaming "in a less intrusive way" than pop-ups or other methods often employed by free-to-play games.

The company's ads and coupon codes can be displayed on in-game objects such as crates, snacks and walls in its platform.

"Usually for these types of ads, you have to talk to the game developers, sign a deal, and have them manually insert the ads into the game and the whole process can take a year," said chief executive Nithinan Boonyawattanapisut.

"But we can cut this short by having the brands inserted into the game in real time through our system. We are kind of like a mix between Facebook and Google programmatic ads and product placements you see in movies." 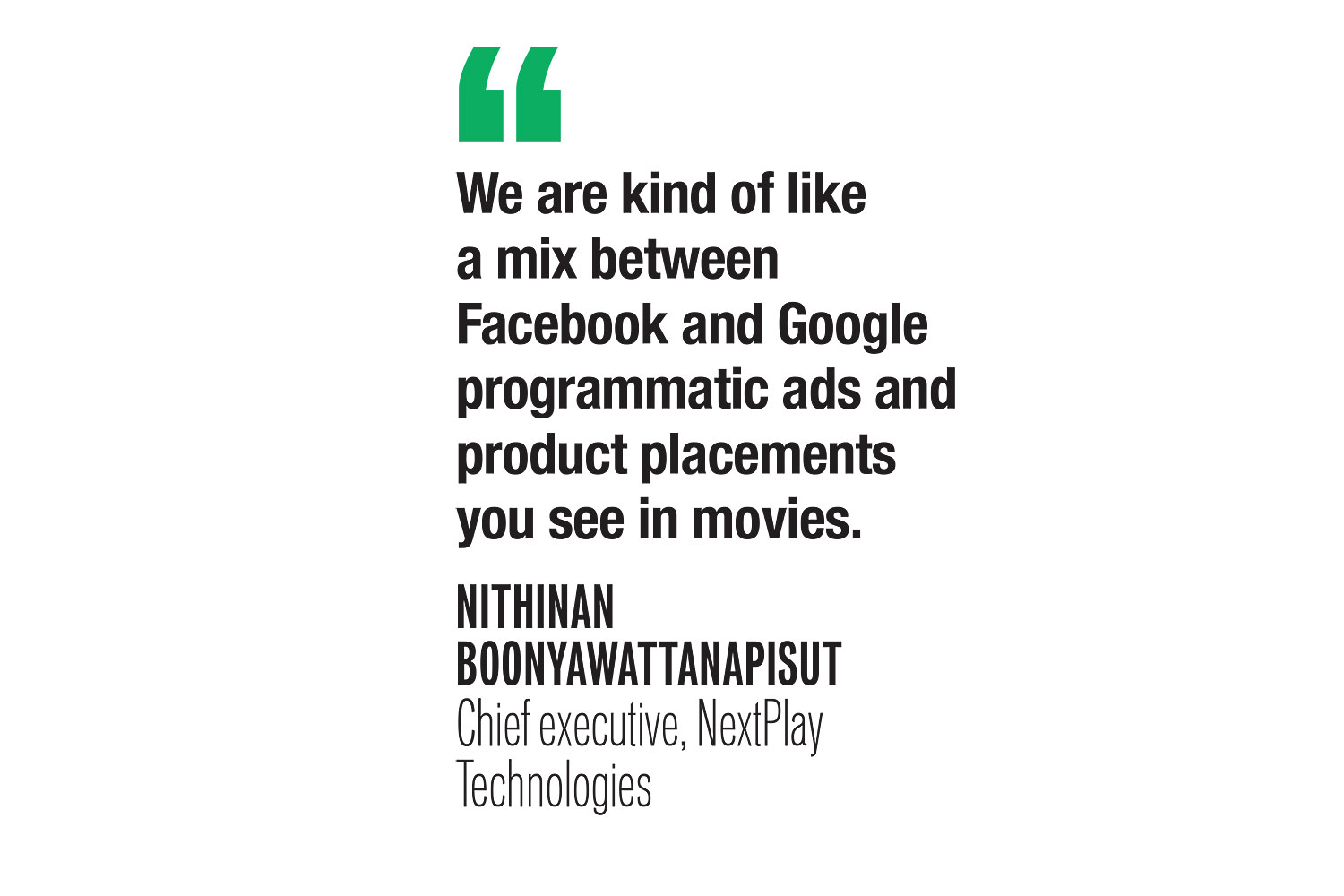 In June, HotPlay secured a listing on the Nasdaq by completing a reverse merger, whereby HotPlay bought 80% of the US-based online travel company Monaker Group, which was already listed on the stock exchange.

It then transferred ownership of HotPlay to Monaker Group and changed the name of Monaker to NextPlay Technologies, which is now the parent company of HotPlay.

NextPlay, listed as NXTP, now has a market capitalisation of about US$177 million and trades at $2.03 per share as of Aug 31, down from $2.24 per share when the merger took place on June 30.

Ms Nithinan said the company must prove to old and new investors how it will transition Monaker from a travel sector company hit by the pandemic-induced travel downturn into a broadly defined digital advertising group with sites on real estate and other sectors beyond gaming.

NextPlay is now on an acquisition spree, recently purchasing for $5 million the company Make It Games, whose technology promises to considerably cut the animation costs of developing video games by utilising artificial intelligence.

"Animations can cost as much as 50-60% of the total cost of making a game and are very labour intensive," Ms Nithinan said. "But with AI you can quickly create these animations without requiring a team of animators to sit there developing each animation individually."

This year the company also purchased a Puerto Rican bank, International Financial Enterprise Bank (IFEB), for about $14 million and will rename it NextBank in order to operate online banking services with a cryptocurrency component.

Ms Nithinan said that due to the broad charter of the bank, NextPlay can shift its focus more towards accepting cryptocurrency payments.

According to a filing with the US Securities and Exchange Commission, NextPlay acquired 51% of Reinhart TV AG, a Zurich-based software company that provides design and software development services to telecoms and digital content owners.

The lavish spending should come as no surprise because NextPlay's largest shareholder is Thippaporn Ahriyavraromp, head of the massive property development company DTGO and heiress of the Chearavanont family, owners of the Charoen Pokphand Group and Thailand's richest family, according to Forbes.

While the Thai economy suffered its worst economic depression in decades, the Chearavanont family patriarchs grew their wealth by $2.9 billion over the past 15 months.

Ms Nithinan used to work as head of the gaming operation at True Corporation, a unit of CP Group, before founding HotPlay in 2016. She attracted the eye and chequebook of Ms Thippaporn, allowing the humble tech firm to rapidly expand through ambitious acquisitions.