Entrepreneur Sittichai Komam didn’t waste time once the government in late August decriminalised kratom, a coffee-like plant native to Southeast Asia that can give users a mild high.

Within hours, Mr Sittichai was on Facebook selling freshly picked kratom leaves, sourced from his neighbourhood in southern Thailand, to local consumers.

Popular in the US, where advocates say it’s an opioid alternative but critics say it’s a dangerous drug, kratom is the latest herb the Thai government has legalised for production. Though producers can only sell domestically for now, there are plans to allow exports, potentially enabling local dealers to become suppliers to the US, the world’s most lucrative market.

“A lot of the older villagers kept kratom trees to harvest and eat their leaves,” Mr Sittichai, 31, said. “After it became legal, I started collecting and buying the leaves to help them earn extra income.”

Already, the domestic response has been overwhelming: One week after Mr Sittichai launched, he stopped advertising because orders were coming in faster than villagers could harvest the crop.

Still, consumers have many options on social media platforms like Facebook or e-commerce outlets like Sea Ltd-backed Shopee, where hundreds of new posts offer stacks of fresh leaves for roughly 100 baht per 100g.

Thailand removed kratom from the narcotics list on Aug 24 and on Sept 8 lawmakers passed a draft law to allow kratom imports and exports. The moves followed easing of rules against cannabis and hemp.

Thailand lags Indonesia as a producer of the coffee-like shrub, which has leaves that advocates say can kill pain, boost energy and treat depression and high blood pressure. Successive governments had banned its cultivation, consumption or sale, and people convicted of possessing any part of the plant faced hefty fines and lengthy prison sentences.

The local kratom market could be worth 600 million baht by next year, based on assumptions that the sector will be smaller than the hemp industry, according to Chaiwat Sowcharoensuk, an analyst at Krungsri Research. Once the government announces rules to regulate trade and large-scale companies join the green rush, though, the export market could be significantly larger, he said.

“Decriminalisation will not only benefit farmers but will create a whole new supply chain from upstream to downstream and will likely attract operators looking to turn it into beverages, health supplements and cosmetics,” Mr Chaiwat said. 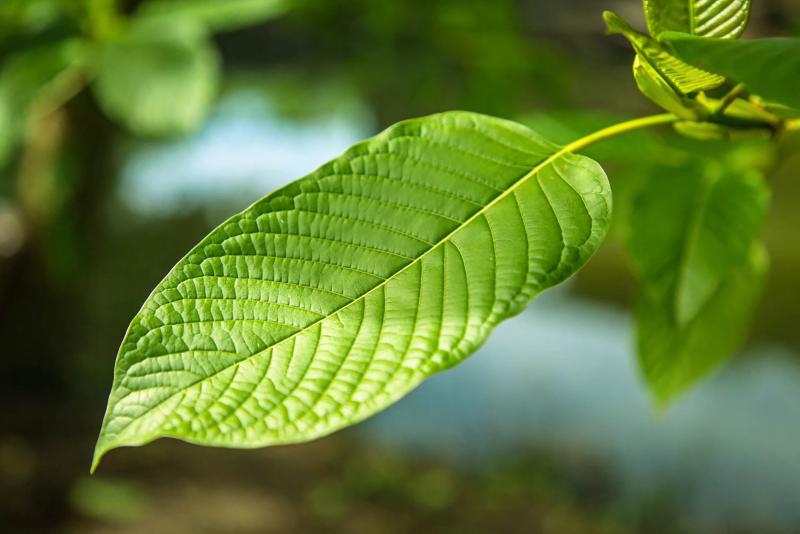 A leaf of a kratom plant on a farm in Nonthaburi, Feb 2, 2021. (Office of the Narcotics Control Board (ONCB) / AFP photo)

The biggest potential export market is the US, where online dealers now sell Indonesian-sourced kratom powder and other products to consumers looking for alternatives to opioids. The US market is estimated to be valued at more than $1 billion annually, with 11 million to 15 million users, according to the American Kratom Association, which based its valuation on imports from Indonesia.

“We expect that the legalisation of kratom in Thailand will lead to more acceptance of this botanical, and, in turn, reasonable regulations for growing and processing in the countries where kratom is cultivated,” said Jenn Lauder, director of marketing and advocacy at Kraken Kratom, an Oregon-based vendor that sells products from strains local to Indonesia and Thailand.

“This means that companies in the US could have greater control over their supply chains, including seed-to-sale tracking and quality assurance standards that start at the source, and more consistent raw plant materials,” she added.

The timing of liberalisation is awkward. The World Health Organization’s Expert Committee on Drug Dependence, which evaluates the potential harm of psychoactive substances, next month will begin what it calls a pre-review of kratom, the first step in a process that could lead to tighter controls.

In the US, the Food and Drug Administration has warned consumers about kratom. “There is substantial concern regarding the safety of kratom, the risk it may pose to public health and its potential for abuse,” Judy McMeekin, the FDA’s Associate Commissioner for Regulatory Affairs, said in a May statement.

Advocates say criticism is unfair. “Kratom may be much more beneficial than harmful to society and if properly regulated can help with certain addictions, help those struggling with acute and chronic pain, and offer those who are trapped in the opioid addiction cycle a safe path away from that,” said Mac Haddow, senior fellow on public policy at the American Kratom Association.

In Thailand, decriminalization is getting good reviews from people like Phatcharaphon Thupaphong, a 47-year-old caddie who chews kratom to get an energy boost while working under the tropical sun.

“Before it became legal, I’d have to hide the leaves under my car seat and they’d shrivel from the heat by the time I got home,” she said. “Now I don’t have to worry.”