We forecast real household spending in Thailand to post growth of 0.2% year-on-year in 2021, following a contraction estimated at 11.8% last year as a result of the Covid-19 pandemic and related lockdown measures.

Total household spending (in real terms) will reach 7.6 trillion baht this year -- still 11.6% lower than the pre-pandemic figure of 8.6 trillion in 2019. While we believe that there will be an uptick in spending in the consumer and retail sector in 2022, with real household spending growing by 1.4%, growth levels will still lag the five-year historical average (2015-19) of 4.5%.

Retail sales in June, the last month for which figures are available, recorded the fifth consecutive month of year-on-year growth. However, the 14% rate reflected the low base effects of 2020, and in absolute value was still below the same period in 2019. Consumer confidence, meanwhile, reached a 23-year low in August, reflecting people's worries about the impact of the third wave, lockdowns and the slow progress of vaccinations. 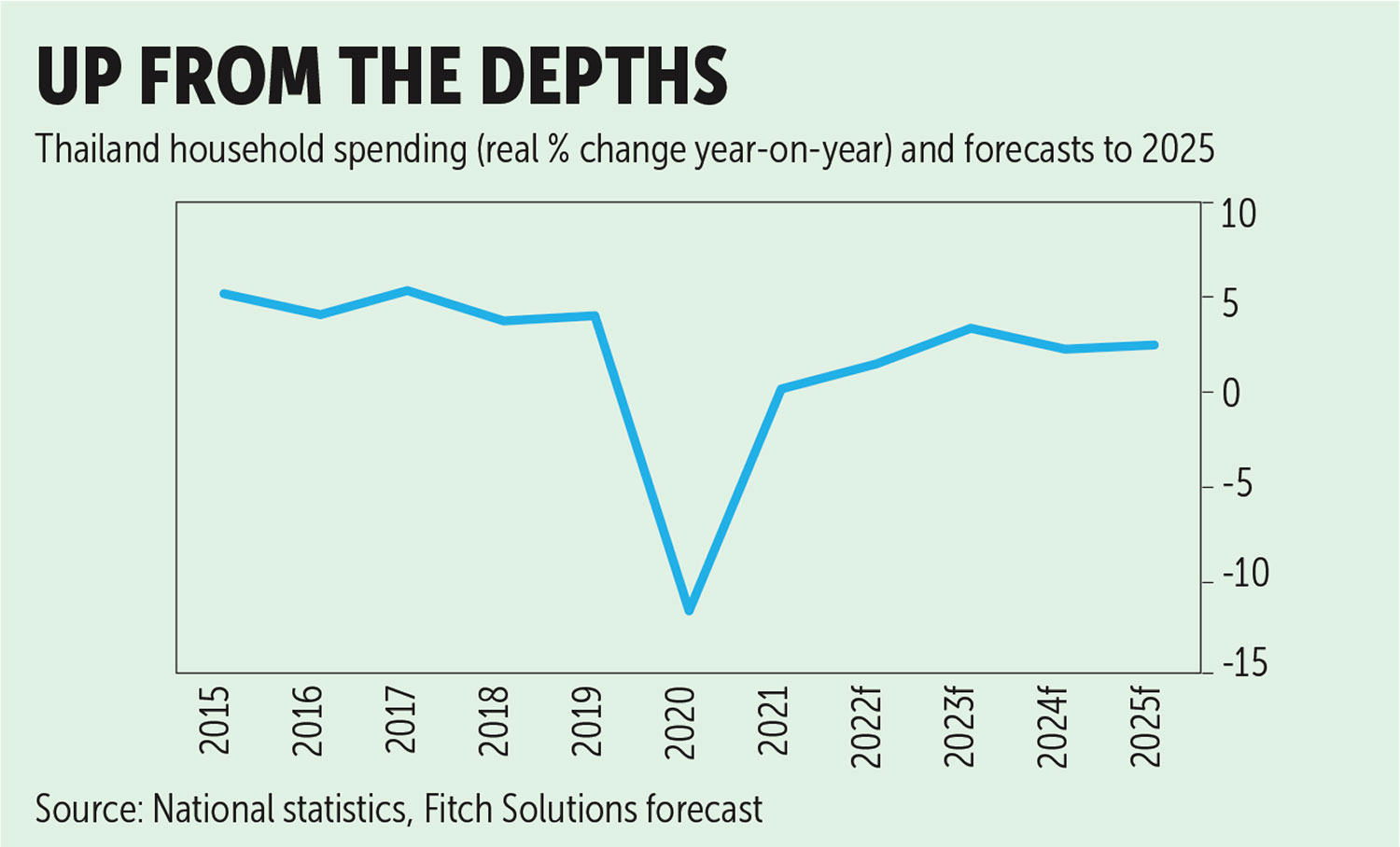 Our forecast for modest growth in real consumer spending in 2021 is in line with our country risk team's forecast that the domestic economy will grow by a real rate of 1.9% year-on-year, compared with a contraction of 6.1% in 2020. The main driver of economic growth is the rebound in net exports, due to improving economic outlooks in the United States and Europe.

However, we note that risks in the GDP forecast are weighted to the downside. Further virus outbreaks would weigh on domestic demand and ultimately private investment. Moreover, the recovery in tourism would be non-existent and we could see greater social unrest as the employment outlook weakens.

As a result, retail sales may stay under more pressure and for longer than we have currently factored into our forecasts.

Inflationary pressures are rising this year in many countries globally as low-base effects, higher commodity prices and supply-chain challenges create localised shortages. As such, we believe a rising consumer price index (CPI) is a key risk to consumer spending over the remainder of 2021, as it has the potential to erode purchasing power. The CPI in Thailand reached 3.4% year-on-year in April but has been declining since then, and was just 0.45% in July, partly reflecting government subsidies to ease people's financial burden.

Our country risk team projects that inflation will average 1.0% for the full year, with the spike proving temporary while soft domestic demand, alongside spare capacity in the tourism sector, will keep inflation below or within the Bank of Thailand's 1-3% target range over the coming quarters.

Government restrictions: Authorities on Sept 1 eased a number of restrictions in the hardest-hit provinces, with restaurants allowed to offer dining in with certain conditions, and most businesses in shopping malls reopening. However, a curfew remains in effect until the end of the month.

According to the Oxford Covid Government Response Tracker (a composite measure of the strictness of curbs in a country), Thailand's restrictions remain moderate, with a Stringency Index score of 55.1 out of 100 (as of Sept 5). We believe, however, that restrictions will ease further as more Thais receive vaccines.

In January this year, the government announced a series of measures, including a 210-billion-baht (1.3% of GDP) cash handout to counter the second wave of the outbreak. Some 30 million citizens, mostly informal sector workers and farmers, who had been hard hit by curbs on businesses and mobility, received 3,500 baht a month in February and March.

To combat hardship during the third wave that started in April, authorities approved disbursements of up to 3,000 baht per person for 31 million eligible citizens between July and December. As well, a royal decree allows the Ministry of Finance to borrow 500 billion baht (3.2% of GDP) to mitigate the social and economic impact of the prolonged pandemic.

On June 1, the government approved a new stimulus package worth 140 billion baht, consisting of cash handouts, co-payments and e-vouchers. All of the measures rolled out since 2020 have shielded consumers from a much tougher economic environment, and form the building blocks of our recovery view for the second half of 2021.

Our global view for a notable recovery in consumer spending relies on the ability of authorities to vaccinate a large enough proportion of their populations and thereby experience a notable drop in Covid infections and a decline in death rates. Both these factors will lead to governments gradually lifting restrictions, which will boost consumer confidence and retail sales.

Thailand belatedly began its mass vaccination drive on June 7, with authorities aiming to inoculate 70% of residents by the end of the year to prepare the tourism-reliant country for a wider reopening next year. As of Sept 13, 40.1 million people or about 58% of the population had received at least one dose, with 12.3 million (18%) fully vaccinated. After a rocky start and problems with supplies, inoculations are gathering momentum with around 800,000 doses being administered daily.

Our forecasts take into account risks that are highly likely to play out in 2021, including the easing of government support.

Other risks include below-target vaccinations, low or disappointing vaccine efficacy and new variants of the coronavirus. These factors could lead to extension of existing restrictions or new curbs, resulting in depressed consumer spending and in a worst case, civil unrest.