With the expiry of its satellite concession, the firm looks to a panoply of opportunities in the space economy

Despite a 30-year satellite operating concession ending on Sept 10, SET-listed Thaicom is still optimistic about the future, indicating the space economy offers a myriad of business opportunities.

The company is considering a synergy of its core value assets and partnerships to provide space-air-ground smart solutions.

"The expiry of the concession is not a disruption for us. The satellite business has been disrupted by innovation for decades," Thaicom chief executive Anant Kaewruamvongs told the Bangkok Post.

The expiry of Thaicom's concession draws the curtain on the concession regime in the telecom sector, following a series of concessions for mobile and fixed-line phone services.

Thaicom 4 and 6 satellites as well as ownership of related assets, such as the control system, have been transferred to the Digital Economy and Society Ministry after Thaicom's concession ended.

Thaicom 4 is a broadband satellite and Thaicom 6 is broadcasting satellite.

Thaicom can continue to operate Thaicom 7 and 8 satellites under a single licence provided by National Broadcasting and Telecommunications Commission (NBTC).

The NT, which was founded through a merger of CAT Telecom and TOT in January this year, is considering hiring Thaicom to handle the satellite control system for Thaicom 4 and 6.

Mr Anant said Thaicom's management and staff still have a positive outlook about the firm.

"The end of Thaicom 4 and 6 satellite capacity is not a threat to the firm. We believe the new space economy is a blue ocean for us," he said. 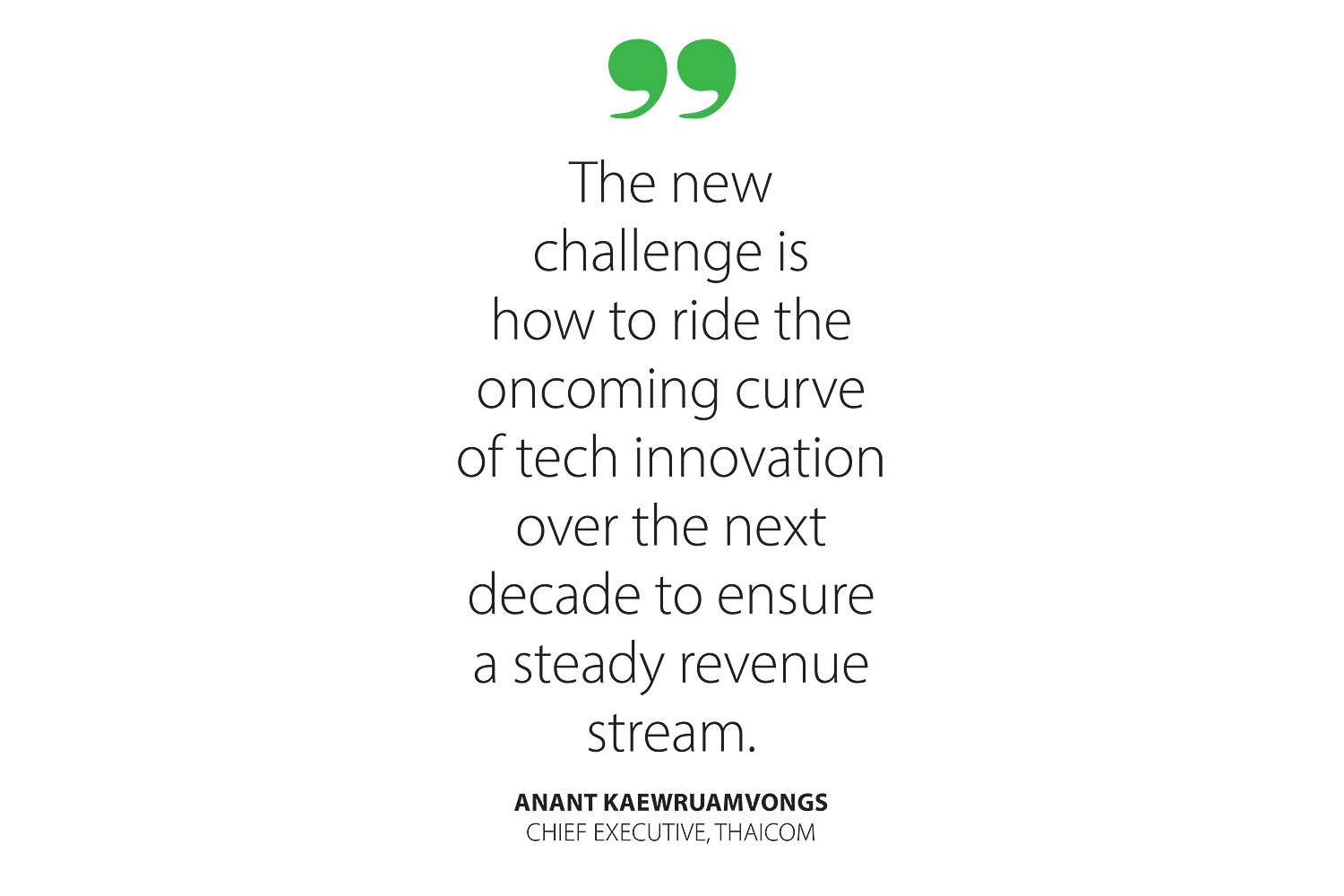 The company has skilled and experienced employees and management who work together effectively on marketing strategies, he said. It also has a strong relationship with state agencies through its operational footprint.

Mr Anant, who has been a company leader for two years, stressed the new challenge is how to ride the oncoming curve of tech innovation over the next decade to ensure a steady revenue stream.

The first lies in new potential businesses in line with the macro-economy, including space-air-ground smart solutions.

Mr Anant said the company can tap into the drone business through the development of flight control systems, unmanned aerial vehicles (UAVs), satellite data analytic services, digital platforms for drones as a service, as well as drone spraying services.

Thaicom may work with partners through a consortium to discuss with satellite makers building a new broadband internet satellite called a software defined satellite (SDS), he said.

SDS can support flexible and fine-grained networks, improve collaboration between satellites and the compatibility of heterogenous space systems, as well as reduce costs, said Mr Anant.

The budget for such projects is undetermined, pending more study of the end-user market, as the technology will compete with fixed broadband and fibre-optic internet services.

LEO satellites operate 500-2,000 kilometres above the Earth's surface, compared with a height of 36,000km for geostationary satellites, which are considered the traditional type of communications satellites.

The advantage of the lower orbit is lower latency, which offers access to high-speed internet services.

Satellite service should not only focus on TV or telecom business, but also aerial photography services through synergy with UAVs and Internet of Things solutions on the ground, he said.

"The space economy can allow countries to boost their competitiveness," Mr Anant said.

China, for example, developed a clear roadmap for its space economy and plans to capitalise on satellite orbital slots through a number of high-, medium- and LEO satellites, as well as integrated smart solutions to drive its macroeconomy, he said.

In the near future, governments are likely to use satellite services more, such as for real-time aerial photography to provide natural disaster warnings, said Mr Anant.

Satellites can also support communication in the industrial sector, he said.

For example, solar cell technology was developed from usage in satellites before being adopted for public use, he said.

Although Thaicom's concession expired, the company is still locked in several legal disputes with the state.

The NBTC passed a resolution on May 25 that Thaicom is allowed to use the satellite orbital slots of 10 satellite network filings, including those used by the Thaicom 7 and 8, only until Sept 10, when the firm's concession ended.

The company disagreed, saying the right to use the satellite orbital slots for Thaicom 7 and 8 does not fall under the concession, but under a licence for telecom services granted by the NBTC, which means the network filings can be used for the duration of the satellites' lifespans.

Thaicom filed a complaint in July seeking the court's judgment to revoke the NBTC resolution as well as an injunction to suspend the effect of the resolution.

The Central Administrative Court on Aug 9 issued an injunction to suspend the enforcement of the resolution until the court rules on the dispute.

Mr Anant declined to comment on the dispute, saying this is a sensitive issue.

Mr Anant retires at the end of this year and his deputy Patompop Suwansiri is expected to succeed him.