The Covid-19 pandemic has changed a lot about higher education. But some things remain constant: The top tier of the 2022 Wall Street Journal/Times Higher Education College Rankings is packed with familiar names, with Harvard University claiming the top spot for the fifth straight year.

Why are the rankings so stable at the top? In part because the world outside those university walls is so unstable. Schools with the spending power to cope with the falling revenues and rising costs many have experienced as a result of the pandemic fare well in the rankings. Of the top 20 schools overall, all but two also rank in the top 20 for academic resources; the other two are ranked 21st and 26th for resources.

The WSJ/THE rankings are based on 15 factors across four main categories: 40% of each school's overall score comes from student outcomes, including graduates' salaries and debt; 30% comes from academic resources, including how much the college spends on teaching; 20% from student engagement, including whether students feel prepared to use their education in the real world, and 10% from the learning environment, including the diversity of the student body and academic staff.

The rankings rely in part on data collected before pandemic-related shutdowns and moves to online education occurred, and don't weigh increasingly important considerations like quality of distance learning or in-person health and safety practices. Still, the importance of fundamentals like the cost of tuition and student-body diversity remains largely the same during the pandemic.

Some college rankings focus on inputs: They measure the quality of incoming students at a university, considering their standardized-test scores and rankings from their high-school graduating class.

Other lists give significant weight to outside opinion, asking university administrators if they think competing colleges are doing a good job. But the WSJ/THE College Rankings focus on outputs, emphasizing the return on investment students see after they graduate. 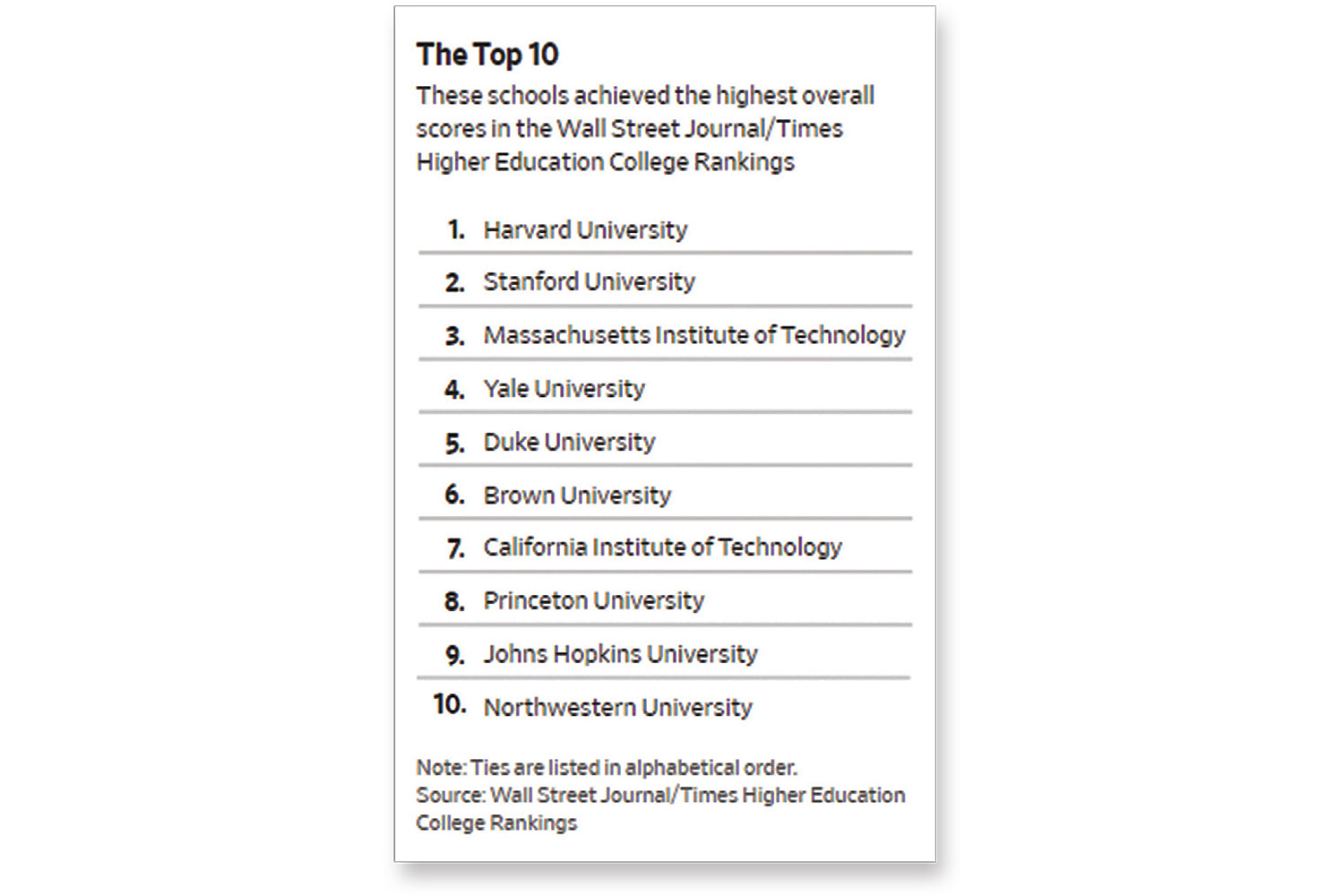 Schools that fare the best on this list have graduates who generally are satisfied with their educational experience and land relatively high-paying jobs that can help them pay down student loans.

The subset of the ranking that focuses on student outcomes is led by Yale and Princeton University in a tie for first place, followed closely by Harvard, Stanford, MIT and Duke, all tied at No. 3.

All six schools graduate students who go on to earn relatively high salaries. And Princeton in particular leaves students who participate in federal financial-aid programs with a relatively light debt burden -- the third-lowest amount of graduate debt out of the entire list of nearly 800 schools in the ranking.

(Since the WSJ/THE ranking is based in part on salaries 10 years after graduation, it doesn't reflect the experience of recent grads, many of whom are wrestling with record levels of unemployment because of the pandemic.)

The rankings also measure the best value among the top 250 schools by dividing each institution's overall score by its net price.

By this measure, the No. 1 school is the City College of New York, the flagship of the public City University of New York (CUNY) system. The runner-up is another CUNY school, Bernard M. Baruch College, followed by Berea College, a private liberal-arts school in Kentucky that charges students no tuition.

(The U.S. Naval Academy and the U.S. Military Academy, the two service academies on the list, also don't charge tuition, but because students are obligated to enter active-duty military service upon graduation, these schools aren't considered for inclusion in the best-value ranking.)

Only two of the schools ranked in the top 10 for best value are private universities -- Berea and Stanford.

The subset of the WSJ/THE ranking that focuses on the collegiate environment -- specifically the racial and ethnic diversity of students and faculty, the percentage of undergraduates awarded need-based federal Pell Grants and the percentage of international students -- is led by La Sierra University, a small Seventh-Day Adventist school in Riverside, Calif.

As last summer's protests and debates around racial inequities continued to shape conversations throughout the academic year, a higher-than-usual number of minority students dropped out due to job losses and other stresses caused by the continuing pandemic.

"This is a moment of racial reckoning," says Lynn Pasquerella, president of the Association of American Colleges and Universities. "Covid-19 has had a desperately negative impact on communities of color, and the biggest losses in colleges have been among 18-to-25-year-old Black and Latinx men."

Rep. Frederica Wilson (D., Fla.), chairwoman of the House Higher Education and Workforce Investment Subcommittee, is proposing a new approach to that problem.

"When I discuss this issue with my constituency, I always point to historically black colleges and universities as a solution," she says. "HBCUs are at the very heart of addressing our nation's longstanding education and racial-equity failures.

"A large percentage of HBCU students come from disadvantaged backgrounds, and attending college is one of their best opportunities to escape the cycle of poverty and build successful futures."

Rep. Wilson says she is working on legislation that would ask the federal government to provide funding to enable children of African descent to attend an HBCU tuition free, and graduate unburdened by student-loan debt.

The program would help disadvantaged students stay in college -- and help save the schools themselves, she says.

"Many are bleeding students by the thousands, and relative to other four-year institutions, they do not have robust endowments or the same access to private funding streams to help them weather this crisis," Rep. Wilson says.

Meanwhile, with the coronavirus still spreading through American communities, universities have had to figure out new ways to teach in a crisis. While some schools have kept a majority of classes online, others have turned to technology to bring students back to campus.

"We plowed our way through Covid. We laid no one off, we furloughed no one, and we reduced no one's salary," says Michael Crow, president of Arizona State University, ranked 214th overall and 56th among public schools.

"We have the largest on-campus enrollment that we've ever had. And the reason that we were able to work through this is that we kept adapting using technology."

Last spring, instead of relying on outside labs performing nasal-swab tests to check anyone coming to class for infection, Mr. Crow directed one of the school's engineering labs to build a better solution.

They came up with a high-speed automated testing system -- what Mr. Crow calls a robot -- that can perform thousands of tests a day, right on campus.

"You just pick up a little tube when you enter a building, spit in it when you get to your desk, drop it off and get your results the next day," Mr. Crow says. "We've done a million tests with that robot. If you want to be tested every day, you can be tested every day."

ASU also invested in new technology to address the needs of students who still aren't comfortable coming to campus.

"We designed and launched 50 new online degrees," says Mr. Crow. "We're a better institution, not because of Covid, but because we decided to be of maximum service to students and embrace different strategies."

Many institutions are finding that online classes -- which just a year ago were treated as an inferior but temporarily essential approach to teaching -- have significant value.

"They're used to electronic information coming at them fast and furious. We're learning more about doing online teaching, and have gotten more sophisticated about using it as a learning tool."

Mr. McCullough expects online classes to continue to be popular even after it's completely safe for students to meet on campus. "Giving students alternative ways to learn is always a good idea."

As more students return to campuses in the fall, it's not clear if as many high-school grads will choose to attend college in the years to come.

"There's been a seven-year decline in public confidence in higher education in the U.S., where people are saying it's too expensive, too difficult to access and doesn't teach people 21st-century skills," says Ms. Pasquerella of the Association of American Colleges and Universities.

The emergence of remote learning during the pandemic has raised new questions about the value of higher education, she says. "Now they feel like online isn't worth as much as face-to-face."

For those with these kinds of doubts, especially concerns related to the pandemic, Ms. Pasquerella says she might advise upper-middle-class or wealthy students to wait a year before making a decision about going to college.

"Take the year off and serve others. Join AmeriCorps or Teach for America. Go and find out what it's like to live a different life," she says.

But students coming from working-class households should be wary about taking the same advice, Ms. Pasquerella says.

"If you're at the lowest socioeconomic rungs, don't take time off," she says. "Because if you do, studies show that you will not enter college, and if you drop out you won't return. Go through, get your education, and don't stop."

For those planning to enter college, rankings remain useful tools that students and families can use to help decide where to go. But that said, the ranking of any school shouldn't be the final word on whether it's right for any applicant.

Some students might benefit from a strong engineering program, while others might seek out a liberal-arts education or a thriving sports community.

The WSJ/THE rankings are intended to serve as a starting point for families considering their options: The "best" school in the world might not be the best one for you.

Whether they're near the top or the bottom of these rankings, all these schools are capable of producing exceptional students. Success in college, just like in life and business, is a matter of what you do with the opportunity.

Russia to lift Covid ban on flights to Thailand, other countries