No change in Bank of Thailand rate in 2022
Business

No change in Bank of Thailand rate in 2022

Weak economy and tame inflation mean central bank can continue to be accommodative, according to Fitch Solutions

We maintain our view the Bank of Thailand will keep its key policy interest rate on hold at 0.50% through the rest of this year and 2022, as it looks to maintain an accommodative stance amid the country's economic struggles.

At its meeting on Wednesday, the Monetary Policy Committee (MPC) voted unanimously to keep the base rate on hold in line with Bloomberg consensus expectations. This was a less dovish vote than in August, when two committee members voted for a cut to 0.25%.

In its post-meeting statement, the MPC highlighted the still-heightened uncertainties facing the economy and maintained its expectation for the economy to post weak growth of 0.7% in 2021, following a deep contraction of 6.1% in 2020. However, it also noted an improving outlook for the fourth quarter, due to easing Covid containment measures and an acceleration of vaccinations, and revised up its forecast for real GDP growth in 2022, from 3.7% to 3.9%. 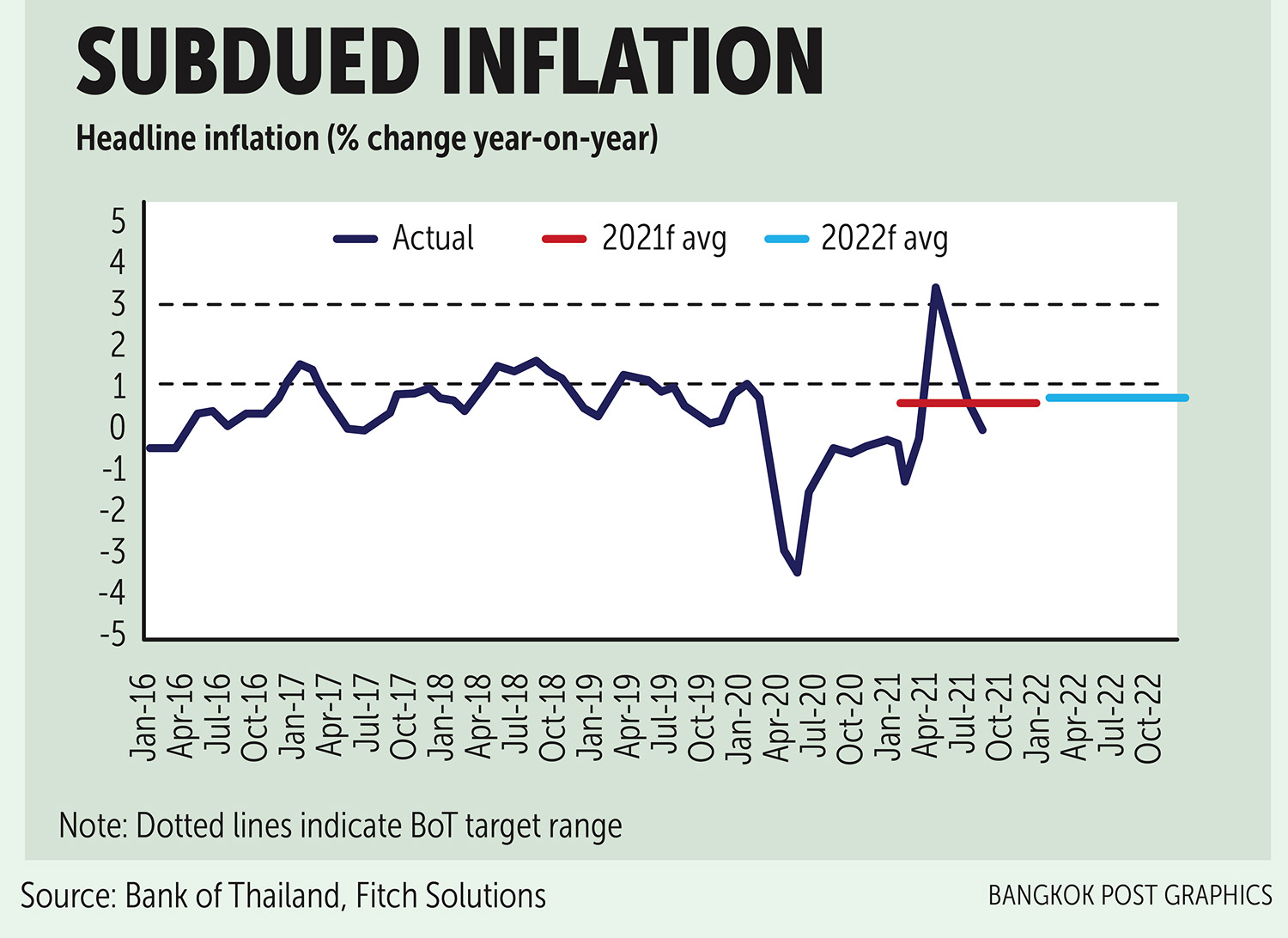 With year-on-year consumer price growth flat in August and declining 0.2% month-on-month, we do not expect a hawkish turn from the central bank over the coming quarters and expect an accommodative stance to bolster economic activity through 2022.

The unanimous decision at this week's meeting reaffirmed our view that the central bank would not turn to further policy rate cuts despite the country's economic woes. The committee continued to highlight its view that fiscal, public health and macroprudential measures would be more effective at supporting the economy than a further policy rate cut and noted that liquidity remained ample, albeit unevenly distributed.

Indeed, access to credit for small and medium-sized enterprises (SMEs) remains a challenge for policymakers, and we expect further moves to direct liquidity to desired areas of the economy over the coming quarters.

In August, the central bank announced additional policies "to enhance the support given to debtors". The measures further relaxed access to a special loan facility and credit guarantees for SMEs, and eased regulations governing consumer credit limits to the end of 2022.

This was combined with further measures to ease the debt restructuring process, including a relaxation of asset classification and provisioning requirements. We believe the central bank will monitor the effectiveness of these measures and adjust them accordingly in 2022.

We expect inflationary pressures to remain subdued, resulting in limited urgency to begin policy rate increases in 2022. From January to August, headline inflation averaged 0.7% year-on-year and we expect continued weak inflation readings over the coming months.

Indeed, despite rising commodity prices, strong producer price growth of 4.9% year-on-year in August and the baht depreciating 11.8% against the US dollar in the year to Sept 30, consumer prices are still falling month-on-month due the weak domestic demand backdrop.

While domestic containment measures have begun to ease, the continued Covid threat in the near term and weak outlook for tourism is likely to result in dampened retail activity. Consumer confidence has continued to decline, with the Consumer Confidence Index hitting an all-time low of 39.6 in August -- down from 47.8 in January. Similarly, the central bank's Private Consumption Index showed an 8.1% year-on-year decline in July.

Consequently, we have revised our inflation forecast down from 1.0% to 0.6% in 2021, while maintaining our view the average annualised rate will stand at 0.7% next year, below the central bank's target range of 1.0% to 3.0%.

As the economy begins to recover through 2022, we expect the BoT to turn its attention to household debt risks and gradually look to normalise policy, beginning its hiking cycle in 2023.

Thailand's vaccination programme has been ramped up in the third quarter, with 45% of the population receiving at least one dose and 28% fully vaccinated as of Sept 30. This marks a sharp increase from 10.2% and 4.0% at the end of June. The government aims to have the population mostly vaccinated by year-end and we expect a further relaxation of containment measures over the coming months, which should enable a stronger pace of economic recovery.

Indeed, as tourism returns gradually through 2022 and uncertainty begins to abate, the need for unprecedented monetary accommodation will begin to recede. The central bank will likely then turn to curbing household debt risks, rolling back on the relaxed measures for consumer credit lending. Household debt to GDP was 77.8% as of the end of 2020, well above the average for emerging markets of 53.9%. By some calculations, the figure for Thailand was said to have topped 90% in the first quarter this year.

Pre-pandemic, household debt was already a key concern for the central bank and we believe that curbing households' reliance on credit will become a priority for policymakers as the economy recovers. As such, we forecast the Bank of Thailand to increase its policy rate by a total of 50 basis points in 2023, taking the base rate to 1.00%, revised up from 0.75% previously.

While it is not our core view, were the Fed to begin its hiking cycle in 2022, pressure could mount on the Bank of Thailand to follow suit. As noted, the baht has come under pressure, partly due to the Bank of Thailand's dovish stance. However, strong fundamentals and recovering tourism receipts should provide support for the baht and Thailand's reserves through 2022, softening any headwinds from US monetary policy changes.