Asian countries are taking big steps toward green goals, but huge energy appetites will be fed mainly by fossil fuels in the near term.

A solar plant in Tay Ninh, Vietnam is among the many renewable power projects developed by Thailand-based B.Grimm Power Plc.

The coronavirus pandemic has taken a huge toll on nearly all forms of economic activity and the energy sector is no exception. Mobility restrictions and lockdowns have put energy resilience to the test as demand plunges and many projects come to a standstill.

The oil and gas sectors were hit particularly hard, with the price of oil nosediving, stalling exploration and hurting production. Prices have since recovered but new challenges are emerging. Most notably, exploration firms are questioning the longer-term viability of huge new investments in oil and gas at a time when the world is aggressively pursuing greener alternatives.

With many economies starting to recover from the pandemic, energy demand growth is back on the uptrend, creating short-term challenges. The International Energy Agency (IEA) projects global energy demand will increase by 4.6% this year, more than offsetting the 4% contraction in 2020 and pushing demand 0.5% above 2019 levels.

Almost 70% of the projected growth worldwide is in emerging markets and developing economies, where demand is set to be 3.4% above 2019 levels. While significant gains are seen in demand for all fossil fuels, coal demand alone is expected to increase by 60% more than for all renewable energy sources combined.

Analysts point to constraints in China and India as key drivers of higher coal prices with winter on the way for much of the world. China, the world's top coal consumer, is in dire need of more supply and is willing to pay "any price", its electricity regulator said last Monday -- a move that threatens energy-starved rivals.

Meanwhile, India's massive fleet of coal plants is running dangerously low on stockpiles, with over half of the country's plants with less than a week of inventories. Thus, overseas supplies are needed to make up for weak domestic production, further tightening the already thin spot market.

The IEA, meanwhile, projects oil demand to rebound by 6%, faster than all other fuels but still 3.1 million barrels per day (bpd) or 3% below 2019 levels. The last time oil demand increased this rapidly was in 1976.

Road transport activity has remained subdued through much of 2021 but is expected to recover to pre-Covid levels in the last months of the year, while air transport demand is on track to remain markedly below 2019 levels for all of 2021. Only in Asia and, notably in China, has oil demand climbed well above pre-Covid levels, the agency said in its Global Energy Review 2021. 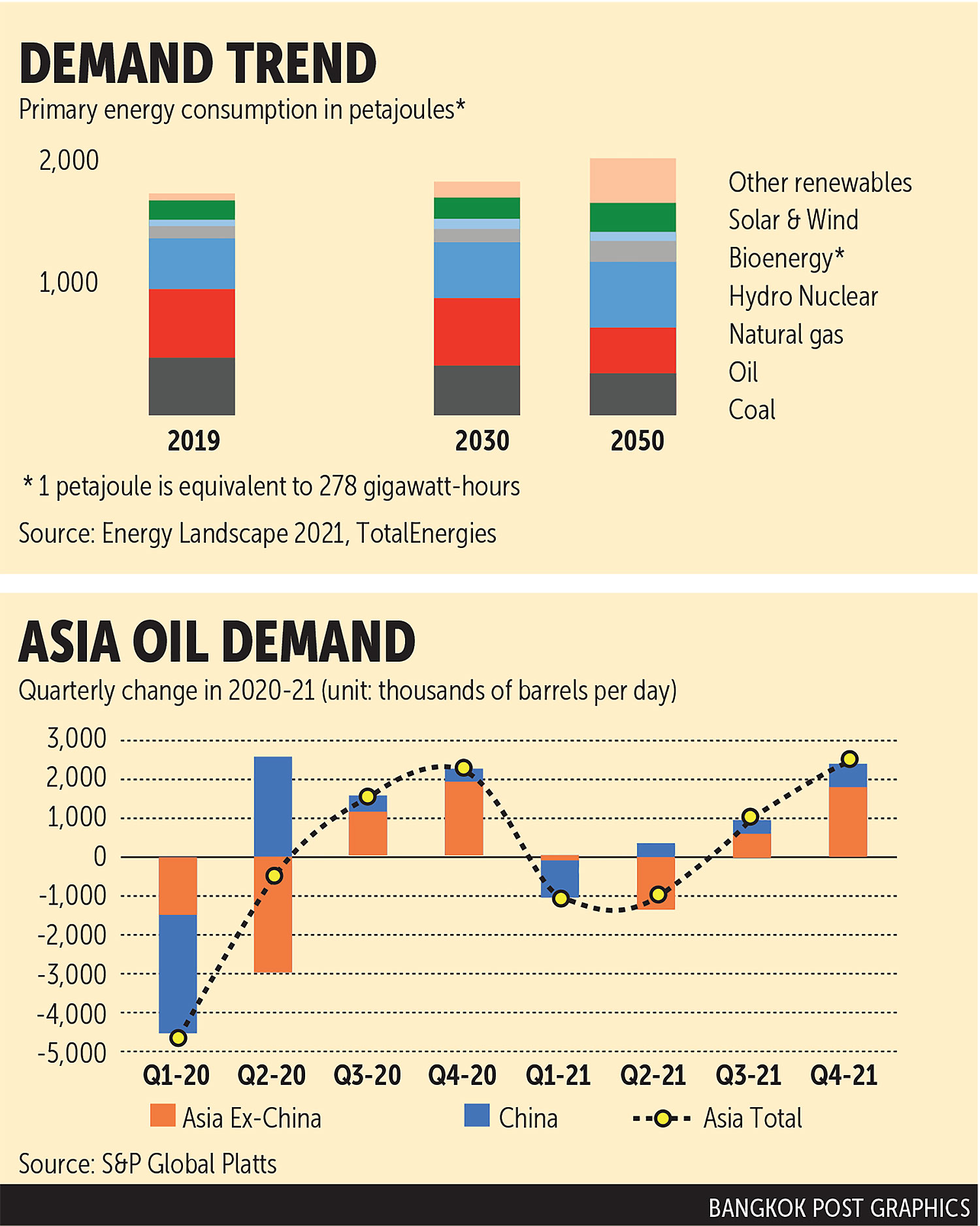 Brent crude futures have jumped more than 50% this year to their highest since October 2018, helped by a recovery in fuel demand and tighter supplies from Opec and its allies including Russia, a group known as Opec+. Goldman Sachs expects oil prices to hit US$90 per barrel by year-end. Brent was trading at $78 last Friday.

"The world's energy needs are evolving dramatically, and the uncertainty around how and when the pandemic will end will certainly impact the market dynamics," Eugene Leong, the president of BP Singapore, said last Tuesday.

Harald Link, president of B.Grimm Power Public Co Ltd (BGRIM), said the main factor contributing to the increase in energy consumption will be the global economic recovery after Covid.

"We see the major increase of electricity demand coming from Asia, principally from China and India. In Thailand, we see several infrastructure projects such as mass transit in Bangkok and the country's first high-speed train being developed that would drive the growth of energy demand," he told Asia Focus.

Based on the statistics, said Dr Link, the lockdown has not had any negative impact on electricity consumption in the residential sector, in contrast to reduced consumption seen in all other sectors principally in business and industrial operations.

"Restarting the economy will increase energy growth but it is still hard to predict the growth rate," he said. "As a power producer, we are still very optimistic that it would surpass the pre-Covid consumption level." 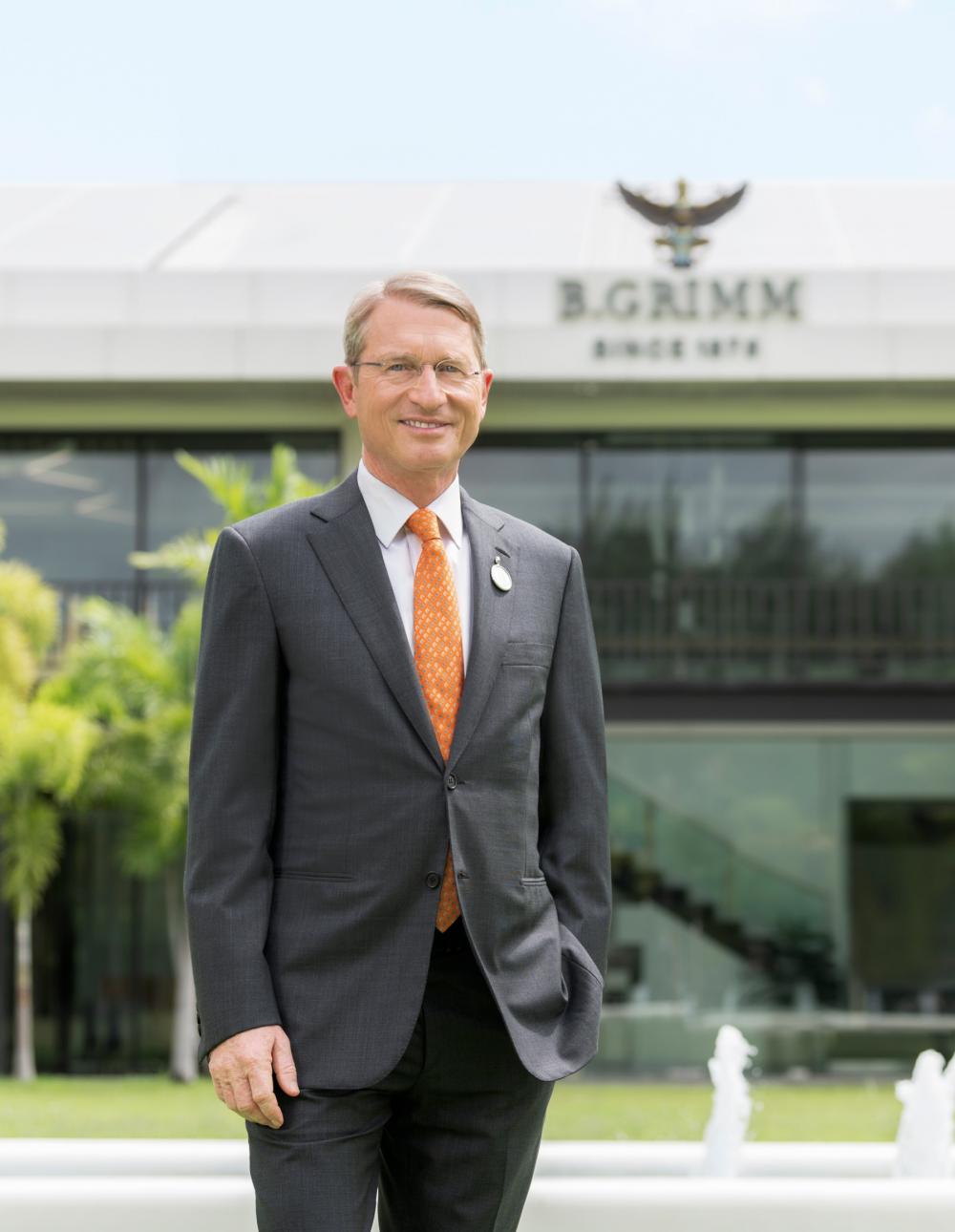 "From an economic viewpoint, many industries are required to use green electricity. From a society viewpoint, carbon-neutral is a great concern," says Harald Link, chairman of B.Grimm Power Group

To some degree, the renewable energy sector has also been affected amid disruptions to supply chains and within the workforce, but the sector has not been dealt as severe a blow as other energy sectors.

According to the IEA, demand for renewables grew by 3% in 2020 as demand for all other fuels declined, and is set to increase across all key sectors -- power, heating, industry and transport -- this year. Renewable electricity generation is on course to expand by more than 8%, to reach 300 Terawatt-hours (TWh), the highest year-on-year growth on record in absolute terms.

Solar photovoltaic (PV) and wind are expected to contribute two-thirds of renewables' growth, the report said, adding that the share of renewables in electricity generation is projected to rise to almost 30% in 2021, from less than 27% in 2019.

Wind is on track to record the largest increase in renewable generation, growing by 275 TWh, or around 17%, from 2020. Solar is expected to rise by 145 TWh, or almost 18%, in 2021. Altogether, the IEA predicts the increases in all renewable sources should push their share in the electricity generation mix to an all-time high of 30% in 2021.

China alone is likely to account for almost half the global increase in renewable electricity generation, followed by the United States, the European Union and India. China is expected to generate over 900 TWh from solar and wind in 2021, the EU around 580 TWh, and the US 550 TWh. Together, they represent almost three-quarters of global solar and wind output. 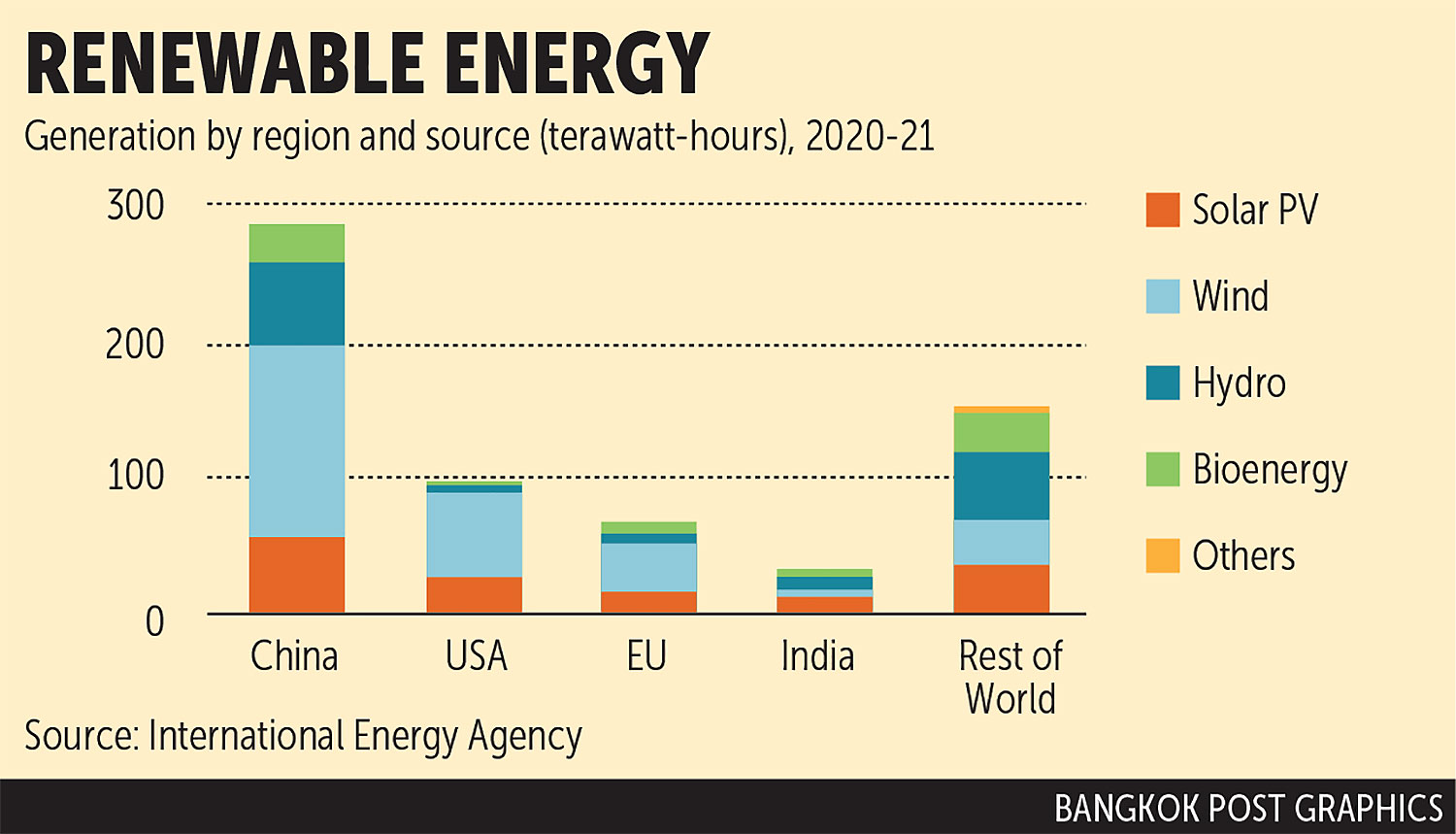 This accelerated investment is linked to the region's gross domestic product (GDP) tripling by 2040. To meet these needs and ensure sustainable development, the region will need to develop clear policies, tap technology innovation in renewables, hydrogen and carbon capture and storage (CCS), and most importantly, accelerate investments in clean energy. The ultimate goal is RE100, shorthand for 100% renewable energy.

A major transformation toward renewable energy deployment has begun to take shape in Southeast Asia. Vietnam is looking to slash coal power capacity by half before 2030 to make more room for renewables and natural gas. Indonesia has also announced plans to overhaul its power mix due to Covid, including cancelling approximately 14.5 gigawatts (GW) of coal power, out of 35 GW in total.

In October last year, the Philippines announced a coal moratorium, pledging to ban the construction of new coal power plants. As well, the Department of Energy is opening its geothermal market to more foreign investment and plans to launch other support schemes for renewables.

Other Asean member states are jumping on the bandwagon of growing solar opportunities. Even Myanmar, despite the pandemic, successfully completed its first round of solar auctions, with a total capacity of 1.06 GW last year.

Growing climate commitments are also set to spur the region's energy transition. As of 2020, Singapore, Brunei and Vietnam had submitted their updated nationally determined contributions (NDC) -- or emission reduction pledges in line with the Paris Agreement -- to the United Nations. More clean energy is the key to achieving these goals.

"From an economic viewpoint, many industries are required to use green electricity. From a society viewpoint, carbon-neutral is a great concern," said Dr Link.

The Thai government recently announced a policy to increase the share of renewable energy to at least 50% of the country's total needs, from about 15% now, Dr Link noted, adding that B.Grimm Power itself is moving toward realising net-zero carbon emissions by 2050.

"Due to the intermittent nature of renewables, especially wind and solar, it is not possible now to fully replace conventional energy sources," he said. "We still rely on fossil fuels including both gas and coal. Technologies such as carbon capture, clean coal and hydrogen are very important during the transition period to RE100."

Energy efficiency also needs to be adopted more aggressively, in Dr Link's view. Demand response (DR), providing incentives to consumers to adapt consumption, will be a key to better managing energy utilisation and stabilising the entire power grid, he added.

According to the sixth Asean Energy Outlook (AEO6), which was released in mid-August, 80% of newly installed power capacity in Southeast Asia in 2020 came from renewable energy.

But as the region's installed capacity will almost triple in 2040, fossil fuels will still account for a majority of the supply in the region, said Dr Nuki Agya Utama, executive director of Asean Centre for Energy (ACE).

"However, if you look at growth of the non-fossil fuel energy supply, it is quite good news that it is the fastest in comparison with other energy supply. For example, the growth of hydropower in terms of installed power capacity, and also solar PV, is higher compared to others," he told Asia Focus at the launch of the energy outlook report. 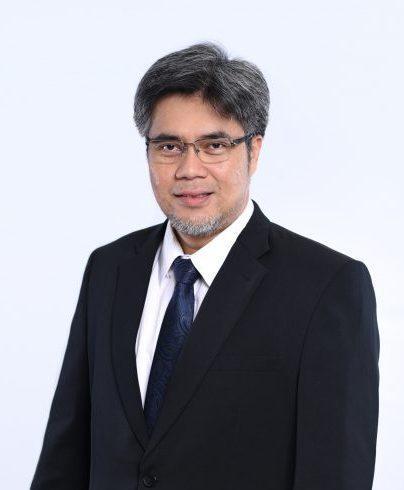 But continued reliance on fossil fuel for at least the next 30 years raises concerns about energy imports, he cautioned.

He recommends that Asean strengthen the region's power grid, even beyond the mainland. "It is feasible economically and technically to expand interconnection all the way to the Philippines. This can increase renewable energy as a share of total installed power capacity to 35% in 2025 for the whole interconnection network," said Dr Utama.

"We are overseeing around 40 sites for solar and wind potential around the region. For wind, it is mostly located in the northern part of Vietnam, where the wind potential is the highest among other member states."

He stressed that the interconnection from Vietnam to the Philippines is recommended. "If all of the members agree to be connected, there are no issues because technically, based on studies or research it is possible. Even economically it is also feasible."

With several of the world's largest carbon dioxide emitters making new climate pledges, there is huge potential for collaboration in Southeast Asia. To benefit from these political shifts and pursue a green recovery, the region needs to forge closer ties with players like the US and China and align its development with their climate and energy agendas. That way, experts say, Southeast Asia can create more green jobs and increase its renewable energy manufacturing capacity in the post-Covid era.

But in the short term, Opec has warned that halting new investments in fossil fuels amid the renewable push is "wrongheaded".

Funding is critical to keep up with surging oil demand, which will continue to accelerate in the coming years as economies bounce back from the pandemic, secretary-general Mohammad Barkindo said while presenting the group's annual World Oil Outlook last Tuesday.

Oil will retain its number one position in the global energy mix, providing 28% of global energy needs by 2045, the report stated. Current oil outflow data shows that investments of $11.8 trillion will be required between now and 2045 in the upstream, midstream and downstream sectors.

"If the necessary investments are not met, it could have not only implications as viewed in current gas developments in Europe and elsewhere around the world, [but] leave long-term scars, not only for producers but consumers as well," Mr Barkindo said. 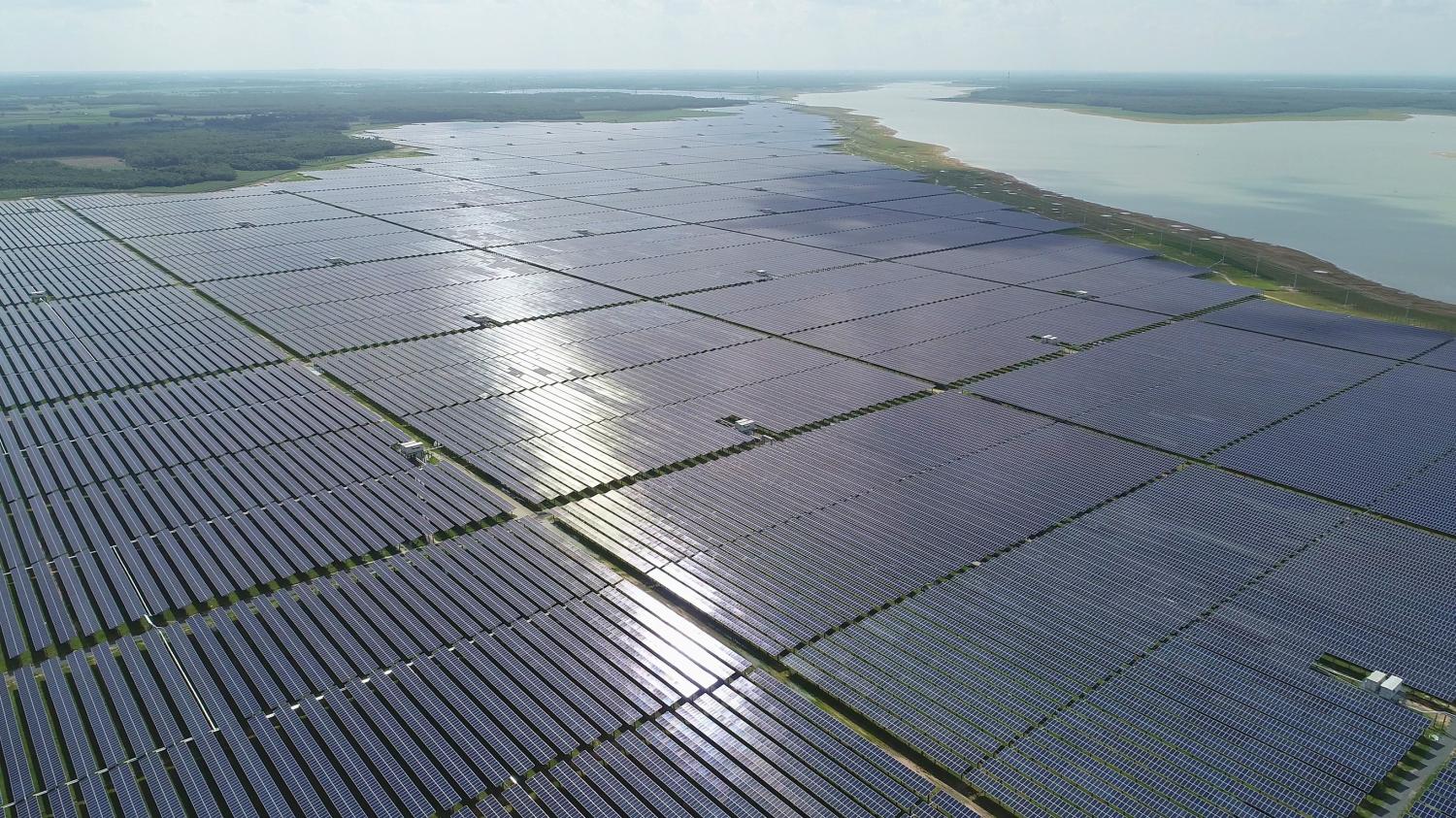 Help your people grow their futures