The government has revised investment plans in the state flagship Eastern Economic Corridor (EEC), as it aims to drive economic growth by 4.5-5% a year between 2022 and 2026. 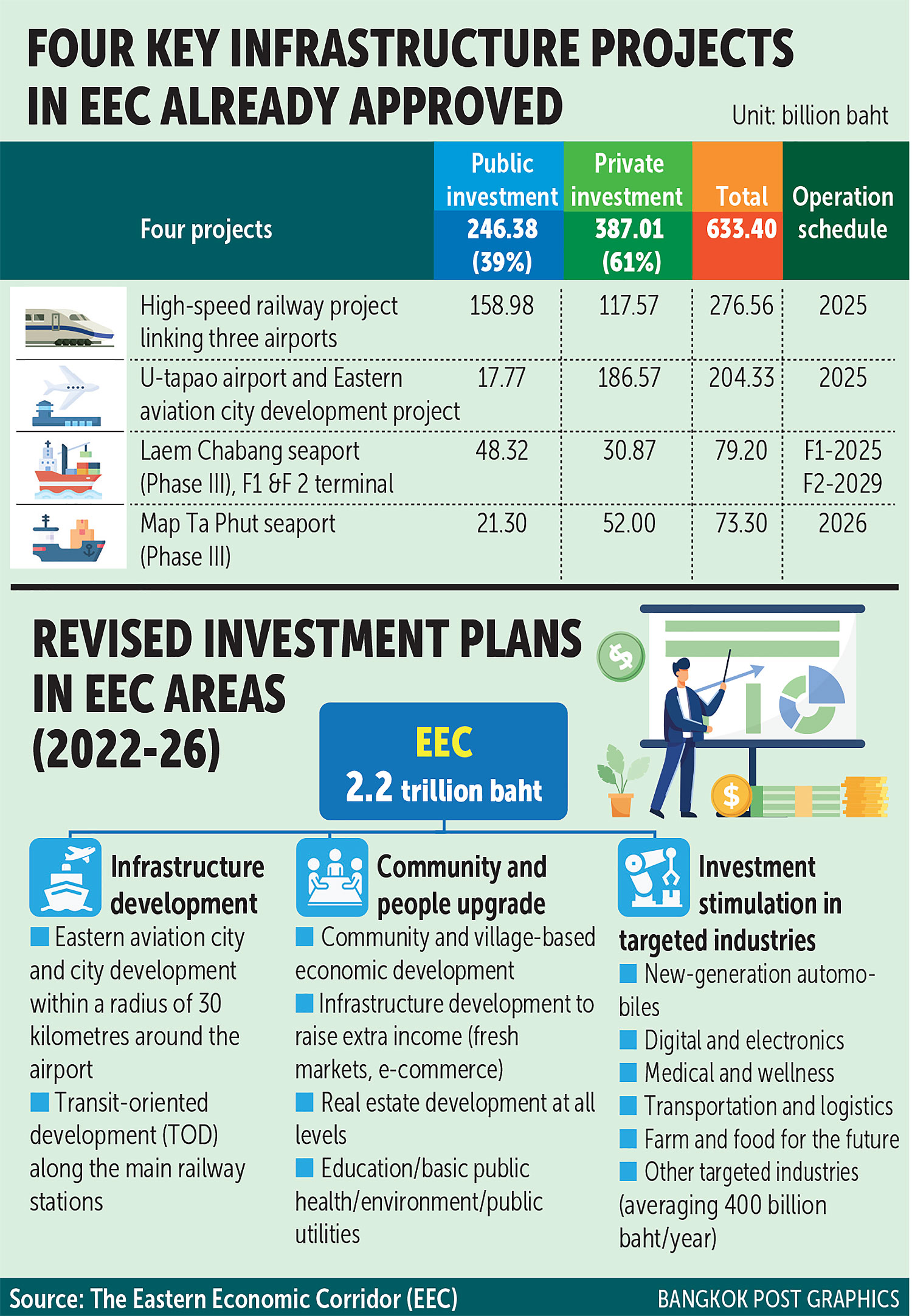 Kanit Sangsubhan, secretary-general of the EEC Office, said the EEC is hoping to become the country's vital investment destination during this period to draw investment at an average of 400-500 billion baht a year.

"The government is ambitious to recover the economy to grow by 4.5-5% a year over the next five years with a special focus on speeding up investment in technology, innovation research and development in the EEC," he said.

According to Mr Kanit, the EEC Policy Committee's meeting chaired by Prime Minister Prayut Chan-o-cha yesterday endorsed the revised investment plan for the EEC for the period 2022-26 with a combined investment value of 2.2 trillion baht.

Of the total, about 200 billion baht would stem from investment in the Eastern aviation city; city development in a radius of 30 kilometres around U-tapao airport, and investment from area development along with main stations of the high-speed rail linking three airports.

Investment in targeted industries is estimated at 400 billion baht a year, 250 billion baht of which will be from annual normal investment and the remainder from the new S-curve industries such as electric vehicles, digital; medical services; logistics, smart farm and food.

According to Mr Kanit, his office also aims to upgrade community and village-based businesses in the areas to raise people's income in surrounding communities and villages.

Under the original investment plan for the EEC, spanning 2018-22, the government had set a target to draw investment of 1.7 trillion baht or an average 300 billion baht a year.

The agency expects the investment would reach 1.7 trillion baht by the end of this year.

In a related development, the committee also yesterday authorised the EEC Office to set a draft investment framework in aviation city and special investment areas as well as privileges and non-tax privileges to draw more investment, especially in high technology, innovation and environmentally-friendly industries.

Mr Kanit said investment in the aviation city will be developed as a sandbox to upgrade Thailand to become the world's top 10 country for the ease of doing business.

The EEC is part of the government's strategy to move Thailand towards a high-tech economy.

The area spans a combined 30,000 rai of land in the provinces of Chon Buri, Rayong and Chachoengsao to accommodate investment in targeted industries, focusing largely on advanced technology.

The government is offering a raft of privileges for investment in the EEC, including standard tax holidays for five to 10 years depending on investment category, corporate income tax exemption for an additional two years, and a 50% corporate tax reduction for three years for investment projects related to human resources development.