The government has a chance to develop the creative economy, but it needs some policy clarity and a long-term strategy

The eponymously named single has amassed more than 250 million views on YouTube since its release on Sept 10.

Gen Prayut also expressed his readiness to promote the country's soft power to increase the value of the creative economy, following the phenomenal success of Lisa's latest music video.

He exuded confidence in the Thai creative economy because of its craftsmanship, traditions and tourism sites, as well as the cultural identity of communities. 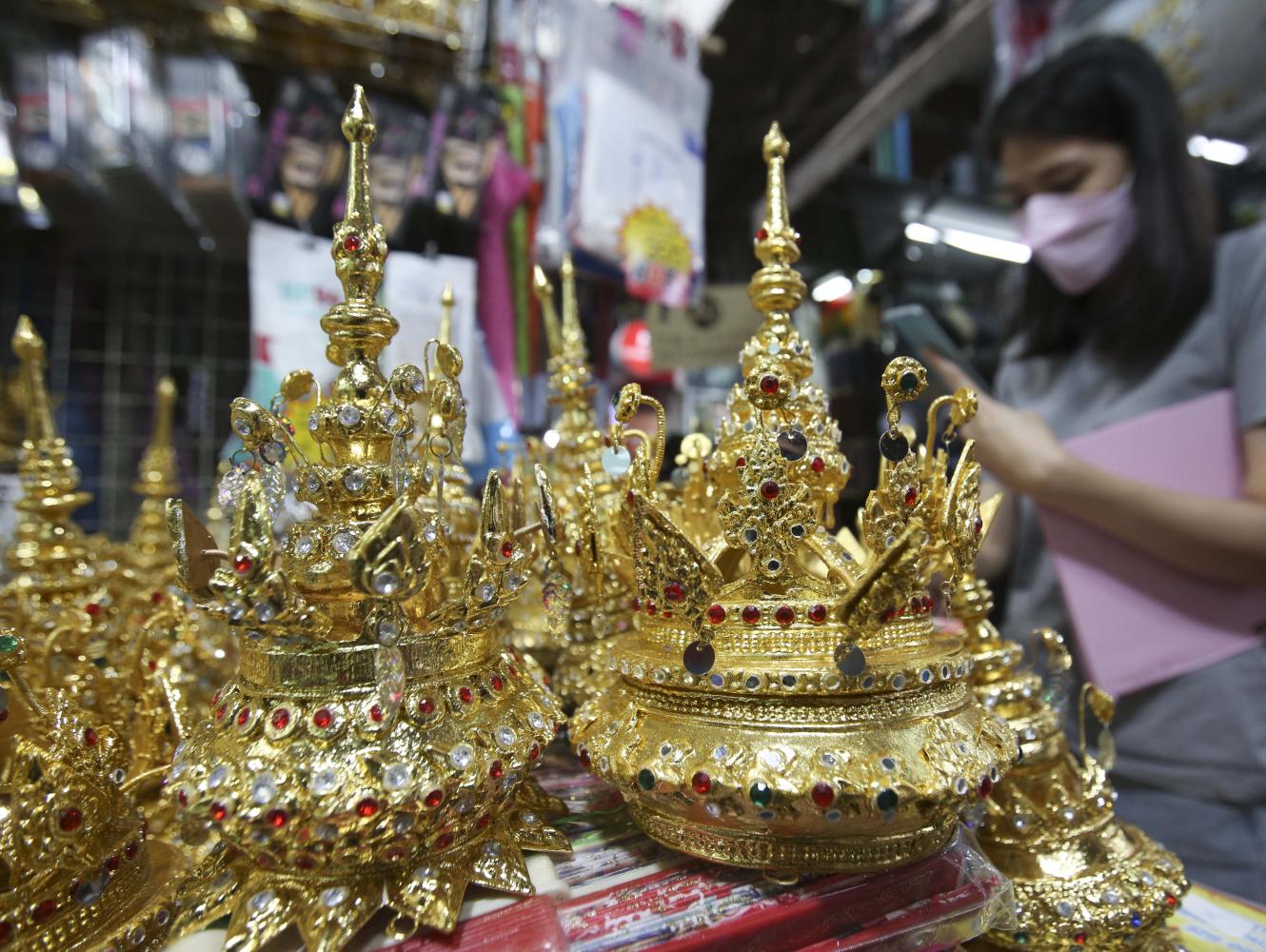 A woman looks at 'rad klao' headgear while shopping in the Sampheng area of Bangkok. Replicas of the headgear — similar to that featured by Thai-born singer Lalisa "Lisa" Manoban, in her latest music video — are selling like hot cakes. Pattarapong Chatpattarasill

Yet "vision without action is a daydream", as the proverb goes. "Action without vision is a nightmare."

The saying is repeated often for a reason, and Thailand faces a raft of challenges to meet Gen Prayut's ambitious goal.

In the 21st century, consumers are looking for more creative products, he said, and Thailand needs to improve its creative economy to generate more revenue.

"South Korea and Taiwan are good examples of using soft power to drive exponential growth for their economy," said Mr Korn. "The government should be the host to collect data from various platforms and social media to develop future goods. The private sector itself cannot be the host because of the high expenses required for big data development."

He proposed the Culture Ministry be restructured and upgraded into one of the economic ministries, giving it more responsibility in playing a greater role in driving soft power development.

"I would like to change the Culture Ministry to the Creative Ministry, which would be a business unit to drive Thai culture, giving it greater power to push the Thai economy," said Mr Korn. "The culture minister should have a good grasp on the potential of soft power to drive the Thai economy."

He also suggested the government help create an ecosystem that supports public creativity.

"Thais have creativity in their DNA, but we lack a mechanism to push forward the creativity to become a creative economy," said Mr Korn. "The first thing the government should do to promote creativity is provide Thais access the internet and digital technology. Further steps include protecting intellectual property and improving laws and regulations to facilitate a creative economy."

Nonarit Bisonyabut, research fellow at Thailand Development Research Institute (TDRI), said to successfully create soft power or cultural capital that adds value to the Thai economy, the government would have to develop it as part of the whole value chain.

He said Thailand has a rich culture in terms of Southeast Asian civilisation, as well as modern culture, ranging from modern TV dramas to music. Yet the country's soft power development has lacked any clear policy direction or creation of a whole value chain, said Mr Nonarit.

For example, the development of historical tourist attractions should allow tourists to see the rich culture there and package nearby destinations, he said.

Thailand should also use more well-known cultural markers such as food and tourist destinations in movies, as South Korea has done, said Mr Nonarit. The country should invite Thai artists and performers from abroad to help develop soft power, he said. 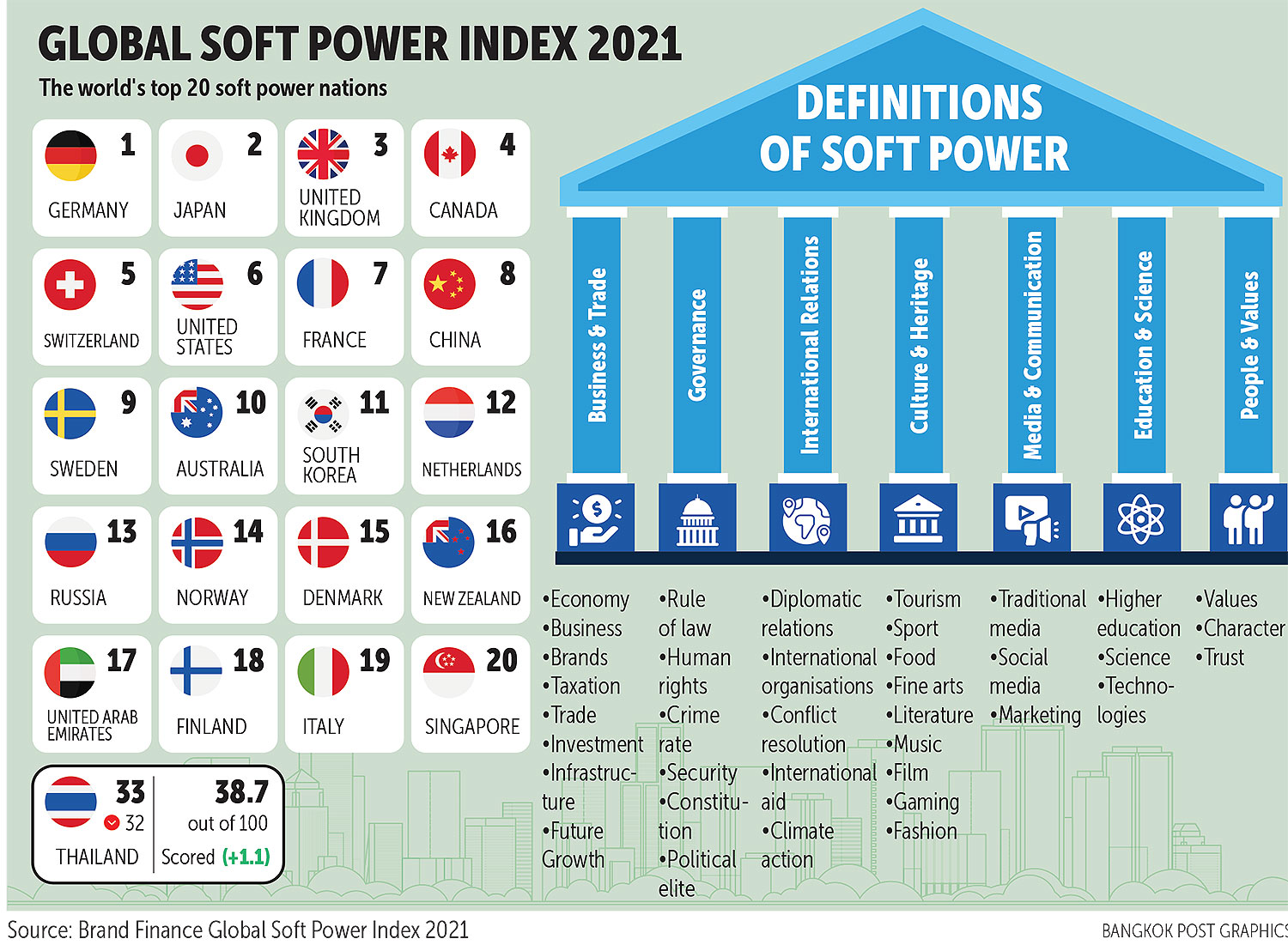 Supant Mongkolsuthree, chairman of the Federation of Thai Industries (FTI), said a new strategy to better connect Thai cultural richness with the manufacturing sector is needed to support the government's plan to use soft power to add value to creative industries.

This linkage is currently weak, though Thai art and culture are reflected through many products and services, ranging from handicrafts and food to Thai spas, he said.

All of them have the potential to be developed into soft power, but the government must come up with a clear objective and target groups as well as marketing campaigns that can engage people, said Mr Supant.

"We need plans that are strategically deeper than TV ads or product promotion via social media," he said.

Echoing Mr Supant's suggestion, Rida Srilomsak, chairwoman of the Creative Craft Industry Club under the FTI, also sees an opportunity to turn Thai crafts into soft power if there is government support.

State agencies, especially those overseeing tourism and cultural affairs, need to "modernise their mindsets" and think about new projects in an international context, she said.

The use of digital technology should be a key part of their thought process, said Mrs Rida.

Authorities should also share business know-how with artists and handicraft makers to help them further develop and add value to their artworks, she said. Many manufacturers in the craft industry do not possess adequate modern marketing tactics to approach new customers, which hinders their product development to serve the global market, said Mrs Rida.

Past government efforts to promote Thai products and services related to tourism and culture were insufficient, she said.

"We don't think it's the right approach to use yak as a presenter travelling on a tuk-tuk. This does not help promote Thai craftworks or establish soft power," said Mrs Rida.

Yak is a local name for yaksha, gate guardians at Thai temples.

"There are many ways to promote Thai cultural products. South Korea and Japan do it through TV series and animation," she said.

First, regulations need to be eased to support creators and draw in new developers, he said. Those in state and private agencies need to adjust their mindset to accept the importance of the creative economy, said Mr Nuttapon.

Second, it is vital to incubate new talent in each segment at the beginning stage, he said. Education may have to be adjusted to enable younger generations to grow with their passions.

"The new generation is a key driving force for soft power, and older generations can give them support," Mr Nuttapon said.

Finally, all parties should put every effort into increasing the strength of every soft power segment to make them thrive and reach the global market, he said. 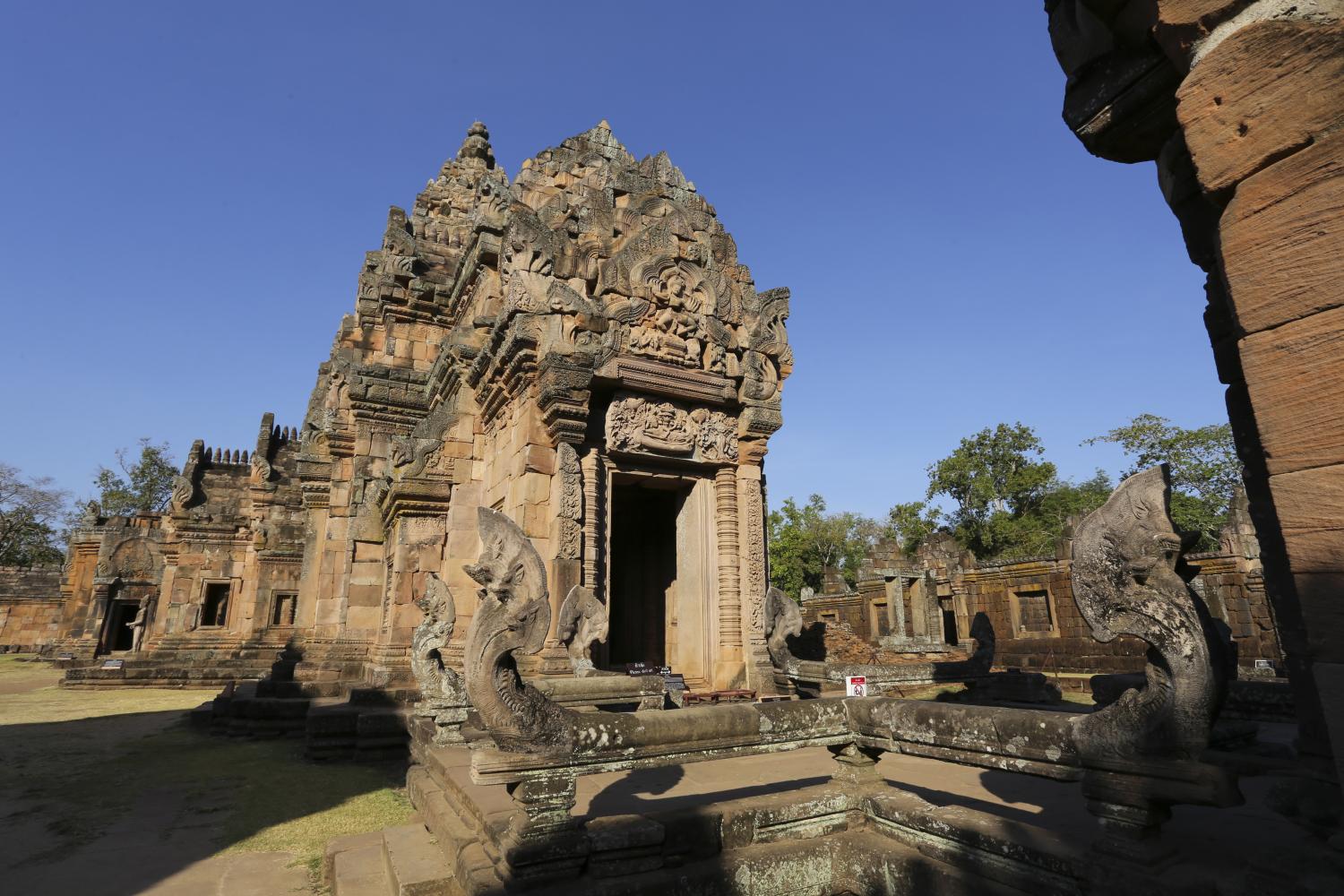 Thailand has a unique identity in terms of culture, handicrafts, creativity and natural resources that could be used to generate income for the country, he said.

Many award-winning ads from Thailand use the country's unique heritage elements for story-telling, which makes them appealing, he said.

Complete strategic plans from policymakers are needed to drive soft power, rather than letting private operators grow on their own, said Mr Pawat.

The South Korean government has a long-term strategy to push soft power via music and TV series to draw travellers to the country, similar to Japan, he said.

Thailand is a prime location for ad shoots in Asean. Shooting and post-production are part of a large ecosystem that could benefit many people involved, including studios, said Mr Pawat.

"Policymakers should support capital and ensure ease of doing business here to facilitate shooting scenes in Thailand, as well as promote other sectors linked with soft power," he said.

Narat Saraman, director of the Digital Council of Thailand, noted Thailand has various kinds of soft power, such as food, natural beauty and Muay Thai, but the country has not made the most out of them.

He wants to see Thai tech brands reach the global market, similar to Samsung of Korea or Huawei of China. Mr Narat said this can happen if the country has a strategic long-term plan.

Soft power can be leveraged for marketing, helping to build trust in Thai brands, he said. Korean products are shown in their TV series, creating confidence among the audience in Korean brands, Mr Narat said.

"Money may not be a key factor to build national brands. A long-term strategy is more important," he said.

"Soft power can generate high income for the country and we should not miss this opportunity. This is why Europe, the US, Japan, China and South Korea emphasise it," he said.

Mr Narat said Thailand needs a healthy ecosystem for innovation and technology, such as government support for procurement, protection of intellectual property rights and a market for products.

Krit Na Lamliang, president of the Digital Content Association of Thailand, said policymakers should change their attitudes from seeking control of content to supporting content developers.

If the government lacks the budget to support soft power, capital markets and crowdfunding are other options to support local content producers, though tax incentives are needed to attract investors, said Mr Krit.

"Without a long-term strategic commitment, it will be hard to move the industry forward," he said. "We can use our soft power to promote products such as herbs, food, beauty supplements and clothing to be well-known in the global market."

"Our products have to be interesting and entertaining on their own merits," he said. "Foreign buyers will only purchase products they view as entertaining."

The main goal of any movie or TV show should be entertainment, said Mr Prachya.

"The takeaway from any movie marketing should be some element that makes the audience want to view it, whether it is a teaser, trailer, movie plot, synopsis, or credits for production, direction or acting," he said.

"The attitude of foreign viewers is a stumbling block, as most European or American audiences still see Thai movies or Asean movies as uninteresting.

"We need a 'Wow!' creative idea or entertaining element that will make audiences watch. We have to admit our ideas, plots and screenplays are a long way from being able to compete with South Korea. Koreans are very good at plotting and film scriptwriting. Some Thai movies have good plots, but they are not entertaining."

"They not only export merchandise, but are also a mechanism to introduce Thainess to a global audience," he said.

"Our content is no longer produced for only local entertainment. We have international viewers in mind."

Successful soft power should be a blend of Thai culture and local attractions into stories, said Mr Surin.

His example was the Thai drama Love Destiny, which showed Thai history, culture, food and attractive locations, along with good storylines and charming characters.